Skip to contents
Politics and Government

The 2019 legislative session in Colorado explained in 5 graphics

A month after it ended, the 2019 legislative session continues to resonate in Colorado.

Memberships start at just $5/month, but if you act right now you can get our biggest discount ever on a Newsletters+ membership, which includes access to members-only newsletters The Unaffiliated (Colorado politics) and The Outsider (everything outdoors by Jason Blevins).

(Already a member? Click here to login and hide this message.)

Memberships start at just $5/month, but act now to get our biggest discount ever on our Newsletters+ membership, which includes access to members-only newsletters The Unaffiliated (Colorado politics) and The Outsider (everything outdoors by Jason Blevins).

Thanks for your support!

It’s been one year since The Colorado Sun began publishing impactful journalism for our state and it’s members like you that are helping us build something special.

You are currently a Basic member, but to celebrate a year of existence, we’re offering our lowest rate ever to upgrade to a Newsletters+ membership and get access to members-only newsletters The Unaffiliated (Colorado politics) and The Outsider (everything outdoors by Jason Blevins). Click here, choose “Switch Plan” and use the discount code ONEYEAR to get this deal.

Your premium membership is already helping us grow, but if you’d like to show your support, visit our merch store for hats, shirts, stickers and more (all proceeds go directly to funding more journalism).

Democratic lawmakers are cheering, and Gov. Jared Polis is celebrating progress on his campaign promises. Republicans are holding rallies to galvanize opposition and threatening recall elections for their opponents. And major policy shifts are starting to take shape as new laws go into effect

But go beyond the partisan words and hot-button issues, and a different picture of the four-month lawmaking term begins to emerge.

A new analysis from The Colorado Sun that looked at votes for all 100 lawmakers on all 460 bills approved by the General Assembly shows a broad bipartisan streak led by moderate Republicans, as well as fault lines on partisan issue.

Here’s a look at five graphics about the 2019 session and the trend lines hidden beneath the political hoopla.

A look at the summary statistics for the 460 bills that won approval in the House and Senate shows broad support from Republicans for the Democratic legislative agenda. 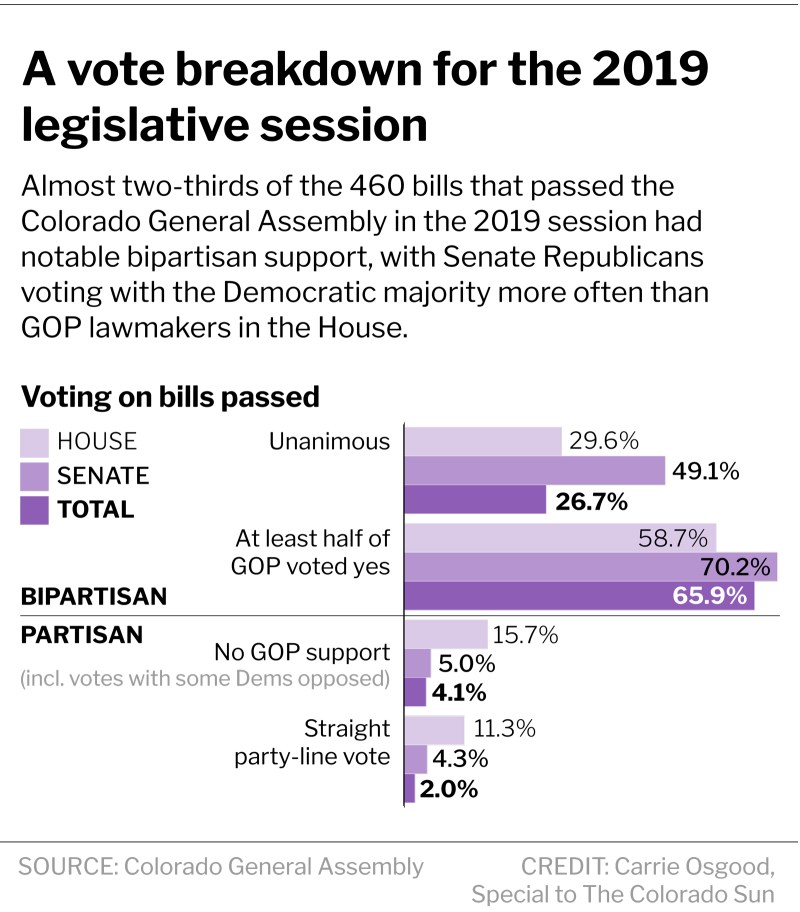 As the analysis notes, bipartisanship is not entirely surprising because hundreds of the bills that get votes each year make minor changes to state law, reestablish existing programs or propose to merely study certain issues.

MORE: A look at how policies passed during Colorado’s 2019 legislative session will impact you

A look at the most high-profile bills

A deeper look at the 100 bills that received the most attention and made the most impact — as selected by The Sun — shows what happens when partisan issues come to a vote. The legislation that won support from at least half of the 40 Republicans in the two chambers fell significantly.

This is where the fault lines are drawn in Colorado, and why a legislative session can appear both controversial and bipartisan at the same time.

The lawmakers who made bipartisan passage possible

A dozen Republicans from both chambers helped make the bipartisanship possible. These GOP lawmakers were the biggest supporters of the bills that Democratic leaders brought to a vote.

This news first appeared in The Unaffiliated. Subscribe here to get the twice-weekly political newsletter from The Colorado Sun.

At the top of the list — and well above all others — for his votes with Democrats is state Sen. Kevin Priola, R-Henderson. The first-term senator is a moderate who represents a swing district in Adams County and a vulnerable target in his 2020 reelection bid. He cast the lone “yes” vote among Republicans on seven bills this session. 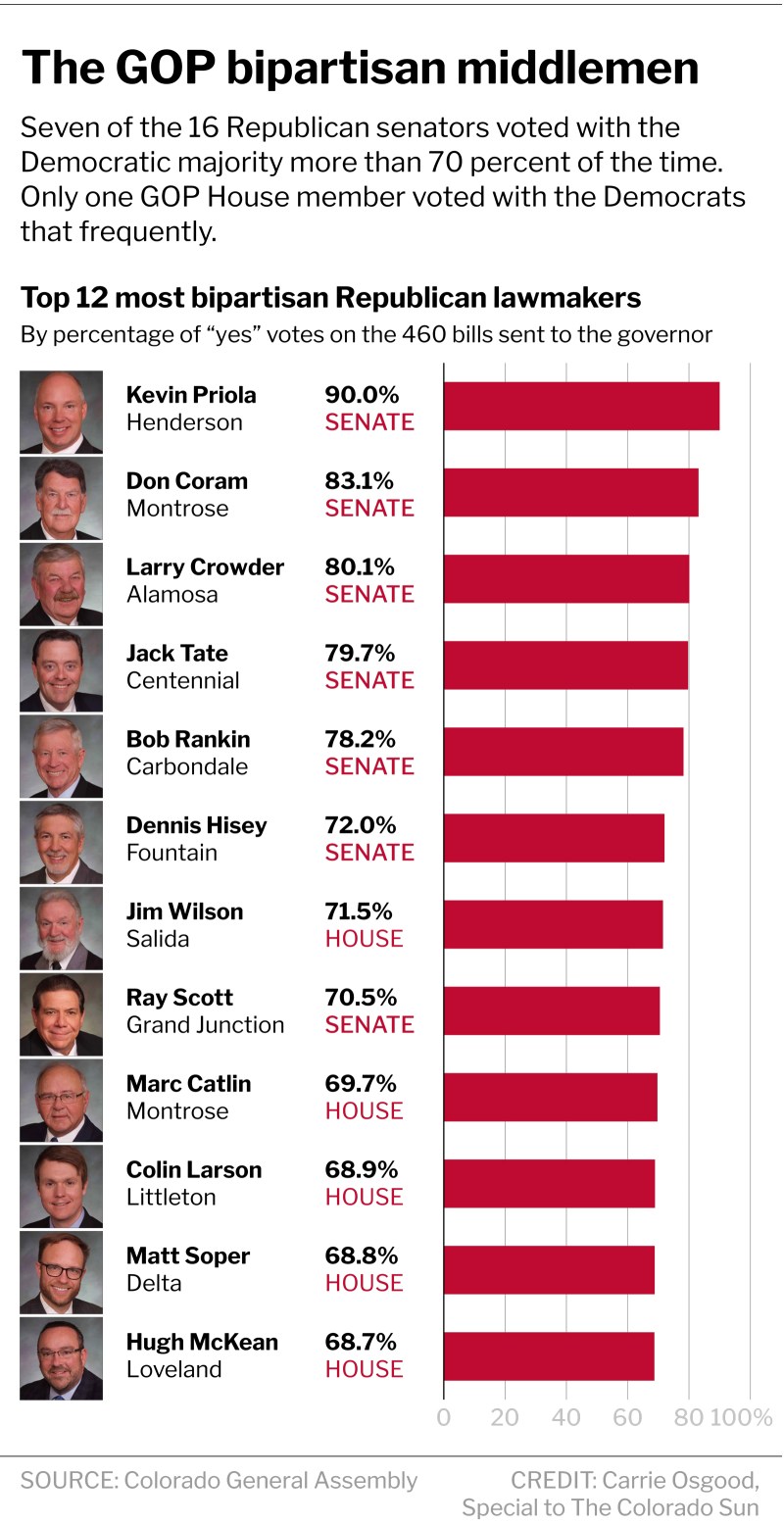 How the votes break down in the state House

The other big trend evident in the 2019 session: The lockstep support from Democratic lawmakers in the majority. In the House, 41 lawmakers are Democrats and 24 are Republican.

A look at all third reading votes — the recorded tally for final passage in each chamber — shows only four Democrats didn’t vote with their party’s leadership 99% of the time. And even those four didn’t stray too far from the pack.

The House Democrat with the most “no” votes on her party’s legislative agenda is Rep. Adrienne Benavidez, who represents Adams County. She cast 26 votes against bills, which represents 6% of her total.

Meanwhile, only three Republicans in the House didn’t support at least half the bills brought to a vote.

How the votes break down in the state Senate

The Democratic uniformity is even more stark in the state Senate, where no lawmaker cast more than five “no” votes on legislation. The most against legislation came from Sen. Kerry Donovan, a Vail Democrat in a district Republicans have sought to takeover in recent elections.

Close behind Donovan is Senate President Leroy Garcia, D-Pueblo. The chamber leader cast four no votes against his own party, including one on the red flag gun bill.

Even Sen. Vicki Marble, the Fort Collins Republican who cast the most votes in opposition, found areas of agreement with Democrats, particularly on laws to expand use of marijuana and hemp.

The partisan breakdown in the Senate is 19 Democrats and 16 Republicans.

It’s worth noting that some lawmakers in both the House and the Senate missed significant numbers of votes. The number of missed votes is not listed in the graphic, but it’s evident in the length of the bar graphs for each lawmaker.

Special to The Colorado Sun

Coloradans struggle to navigate insurance after losing a home to wildfire. State lawmakers want to make it easier.

Two Colorado lawmakers plan to introduce a bill that would shorten and simplify the insurance claims process after a declared fire disaster.

Politics and Government
Thy Vo
2 hours ago