Radically lowered guidelines have state health officials searching for other cities with levels of the chemicals considered dangerous.

Drinking water in Frisco is tainted with dangerous levels of the PFAS “forever chemicals” from suspected firefighting foam runoff into nearby creeks, according to new EPA guidance that radically lowered safety levels and sent state officials in search of cities with similarly compromised water systems.

More than 100 city and town water systems across the state also have test results for PFAS above the new EPA guidelines, state officials said Monday, though in some cases the amounts were so low they must be retested for lab errors or other factors.

In June, the EPA lowered its recommended guidelines for two of the thousands of PFAS variations, PFOA and PFOS, from a maximum of 70 parts per trillion in drinking water down to 0.004 and 0.02 parts per trillion, respectively.

State officials said they are now returning to the 25% of cities that tested over those revised limits during a 2020 sampling program run by the Colorado Department of Public Health and Environment. In that 2020 round, the state sampled about 400 of 800 water systems, covering 80% of the population, and will now return to at least 101 of those systems for more testing.

Because Frisco has been proactive in researching and sampling PFAS, state officials said, the test results prompted the town to move to the next stage of alerting consumers.

Frisco’s warning to the 3,000 town residents called the taint “a concern, not a crisis,” and said people do not have to stop drinking local water. But the next sentence in the alert says, “the lower your exposure, the lower your risk,” and environmental advocates point out Frisco’s water is now more than 1,000 times the new EPA guidance for the chemicals used widely in kitchen utensil, carpet and clothing coatings since the 1950s.

Threats to human health from PFAS include compromised immune systems, increases in cholesterol, decreases in infant birth weight, decrease in liver function, thyroid problems and high blood pressure during pregnancy, according to the state and other guidelines.

Jeff Goble, Frisco’s public works director, said the town was not offering bottled water to people living in areas where the water has tested highest for PFAS chemicals, saying state health officials advised him there’s no guarantee that bottled water is free of the chemicals, either. 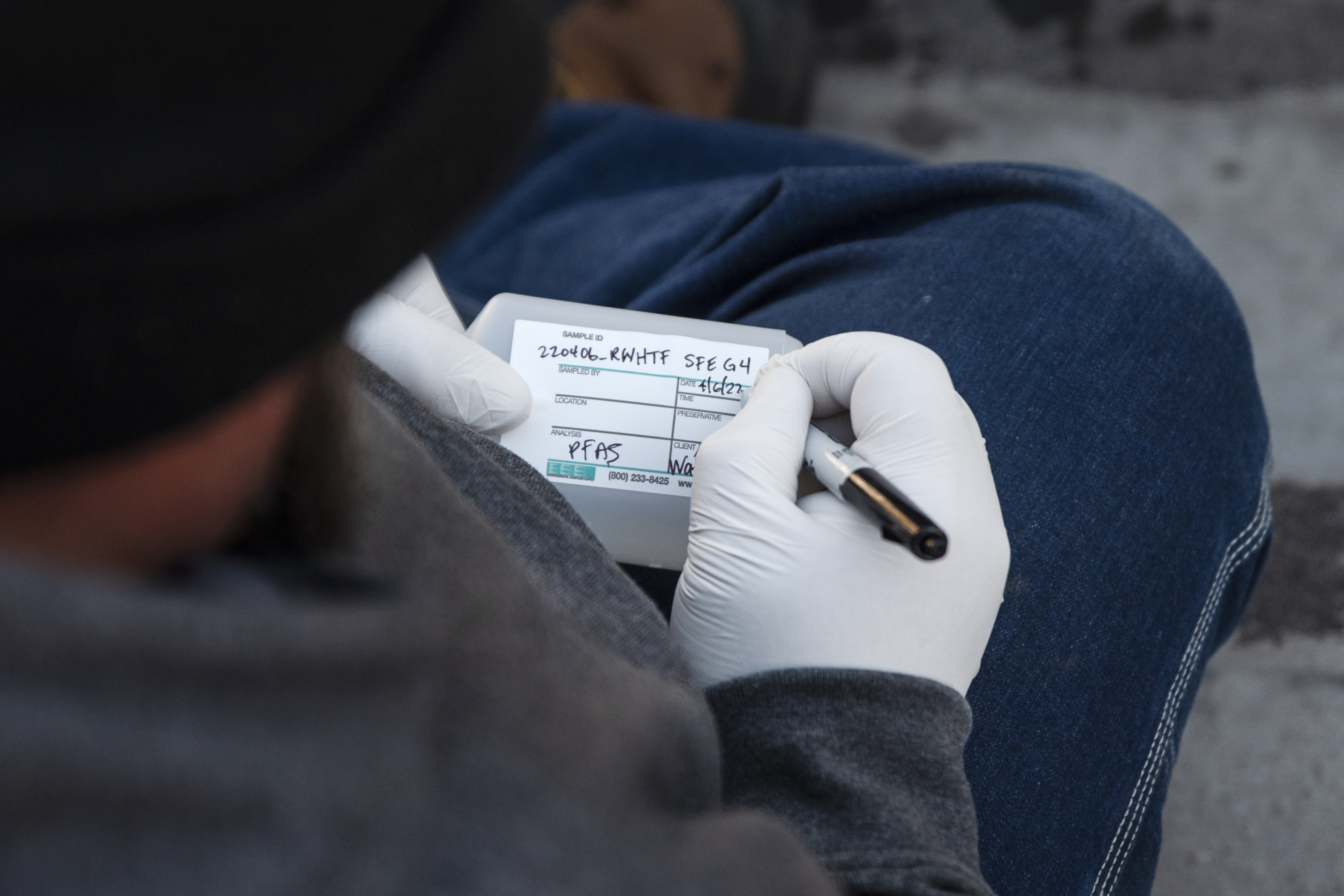 The Forever Problem: “Forever chemicals,” also known as PFAS, are an increasing toxic burden on Colorado and the United States, and The Colorado Sun is committed to coverage of public health threats posed by the ubiquitous consumer chemicals. We continue to follow threats from the chemicals to drinking water, croplands and wildlife, and the extensive costs required to clean them up.

>> Find more of our coverage here

State officials said Monday they are not requiring towns to provide replacement water, and they do not believe it is necessary at the levels they are recording.

The EPA’s weeks-old revised guidelines, which are not meant to be enforceable local regulations but guidance for state water officials, “are saying there is virtually no safe level of PFOA and PFOS,” two discontinued varieties of the common consumer and firefighting chemicals, said Kyla Bennett, director of science policy for the whistleblower defense group Public Employees for Environmental Responsibility.

Bennett lives in a PFAS-tainted town in Massachusetts, she said, where “they tell us not to drink the water. Towns even set up PFAS-free watering stations so residents can go fill up jugs with water until our filtration plant comes online,” Bennett said.

“I would hope that Frisco would be a little more cautious, and maybe even warn residents that vaccines don’t work as well when you have high levels of PFAS in your blood serum,” she said, even more important as the COVID pandemic drags on.

The advisory to residents from Frisco officials says they can lower exposure by using bottled water that has been treated with reverse osmosis for cooking, drinking and preparing baby formula. Some in-home water treatment filters are also designed to take out PFAS, but some of the basic refrigerator or tap-attached filters do not have any effect. Boiling and freezing does not alter the level of PFAS.

Frisco has four fresh water sources: a surface water treatment plant using North Ten Mile Creek water, and three wells. The only source tainted is the well on a peninsula stretching into Lake Dillon that houses the Nordic Center and other recreation sites. Frisco was able to shut off that well Monday, Goble said, because the surface water plant came back online after a year of renovations and at the moment, the town does not need the peninsula well’s water. It will need it again in the future, Goble said, in high demand periods or with more growth.

Frisco is using a $50,000 state grant to help pay for a new filtration system at its central water treatment that will remove PFAS as far as current technology can go, Goble said. That may be operating by mid-summer 2023, he said.

One concern that has flummoxed local water officials is that the new EPA guidelines for the two chemicals PFOA and PFOS lowered the bar so dramatically that most laboratories used by water officials — including the EPA lab —  don’t measure that low. Frisco’s laboratory gets down only to 2 parts per trillion, Goble said.

The state has conducted testing that measures the chemicals down to 0.5 parts per trillion, but at such minuscule amounts, retesting and other investigation needs to be done before any meaningful action can be taken, said David Dani, emerging contaminants coordinator for state health.

The state and many local governments’ current priority is fixing drinking water supplies, not necessarily pinpointing the sources of contamination. Frisco’s Goble said he suspects his town’s contamination originated at a Summit County firefighting training facility on the southeast edge of town, near Miner’s Creek. When Colorado Attorney General Phil Weiser sued PFAS manufacturers in the spring to recover costs from cleanups, the suit cited firefighting foam as a primary target, and high levels of PFAS found in many firefighters’ blood samples.

Until the surface water treatment plant came back online, Frisco was diluting the well water with the three clean sources, Goble said. Dilution in the face of PFAS contamination is a common temporary solution around the country, environmental advocates said.

The same advocates and many academic researchers say PFAS studies are evolving so quickly that no one has yet established truly safe levels of ingestion that are backed by science. The EPA has declared its intention to set hard-and-fast limits in drinking water regulations by the end of 2023, Colorado officials said. State officials have expressed frustration with that slower timeline, but also said they are not standing still while the EPA sorts it out.

The state is “undertaking the sampling program, and where we’ve seen indications above the health advisory, taking steps to inform the public, and taking steps to reduce exposure,” said Ron Falco, the state’s safe drinking water program manager. “And we’ll continue doing that.”

How consumers can reduce their risk:

The Colorado Department of Public Health and Environment has put together an interactive map showing results of tests of drinking water, effluent and some aquatic wildlife for PFAS. You can look for your community’s results on the PFAS Concentration Map Series.

Consumers should be cautious about buying or using various at-home drinking waters. Reverse osmosis filters get good ratings from consumer groups, but other more common activated carbon filters are not always guaranteed to remove the forever chemicals.

A Colorado ranch lost 9,000 acres to a wildfire in April. So how does it look in August?

May Ranch near Lamar is trying to comeback after losing more than half of its acres to a raging grassfire. Hint: Rain helps.

Two years after a Democratic primary in which Hickenlooper was criticized for being too cozy with the oil and gas industry and weak on climate change, he is being hailed as a climate champion

Colorado Department of Corrections to review COVID vaccine mandate as it scrambles to fill 1,800 open positions

A vaccine mandate, testing requirements for prison workers are under administrative review, with a potential rollback coming this week

Delta County thought solar panels were a baaaaad idea. But what if there were 1,000 sheep grazing under them?

After county commissioners rejected an 80-megawatt solar project, Denver-based Guzman Energy Group has returned with 1,000 sheep to sweeten the deal