Good morning from the end of a busy week!

In just a bit, you’re going to see one of my favorite things we do at The Sun: annotations of the opening speeches at the Capitol.

I love these because they fit so neatly into our mission to demystify the process of lawmaking in Colorado. The laws passed (or not passed) under that gold dome affect everyone in the state, but for many people, the process seems too distant or complicated. These “Pop-up Video” style annotations give context, fact-check statements and just generally translate politician-speak into plain English. Whether you’re a politics junkie or a complete newbie, you’re going to learn something and — dare I say it — have a little fun.

Politics in 2020 is going to be everywhere, which is why we launched a second day of our premium Colorado politics newsletter, The Unaffiliated (if you haven’t seen it, it’s like The Sunriser, but with in-depth context and backstory on political news to help you boost the signal and cut the noise).

If you’re a basic member, here’s how to upgrade to get The Unaffiliated every Tuesday and Friday. If you’re Newsletters+ member or above, make sure you’re signed up to get it in your newsletter preferences (instructions, in case you can’t find them).

Our politics news stories will always be free to read, but to get The Unaffiliated, you need a Newsletters+ membership (or higher) to help us afford the resources needed to keep such a close eye on the statehouse and the 2020 election. Start here for instructions on how to get it (and if you can’t afford a premium membership right now, a basic membership is still a huge way to support our journalism).

Oh, and just in case you still don’t care about politics, we’ve got indoor skiing, spelunking and more in this newsletter!

So let’s uncap this superglue, shall we? (more on that below)

At the Capitol: Speeches explained, GOP on education, kindergarten costs 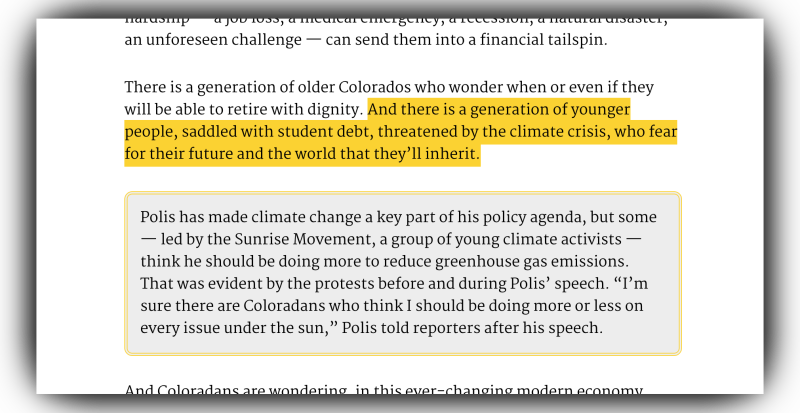 An example of The Sun’s annotations.

I’m not going to judge you if you didn’t even consider watching the opening speeches by the governor, Senate president and speaker of the house this year.

They’re just speeches, right? But each of those powerful politicians chose their words carefully — with references to past controversies, future fights and the work that needs to be done in the present — that show their vision for this lawmaking session and beyond. Our team of reporters explains all the context, all the stats and more in an easily accessible and actually kind of fun presentation. You’ll learn something interesting, I promise:

A side note, as promised in the intro: Before the State of the State address began, anti-fracking protesters unfurled banners and one of them attempted to superglue his hands to the railing at the Capitol, a moment captured by Kathryn Scott for The Sun. 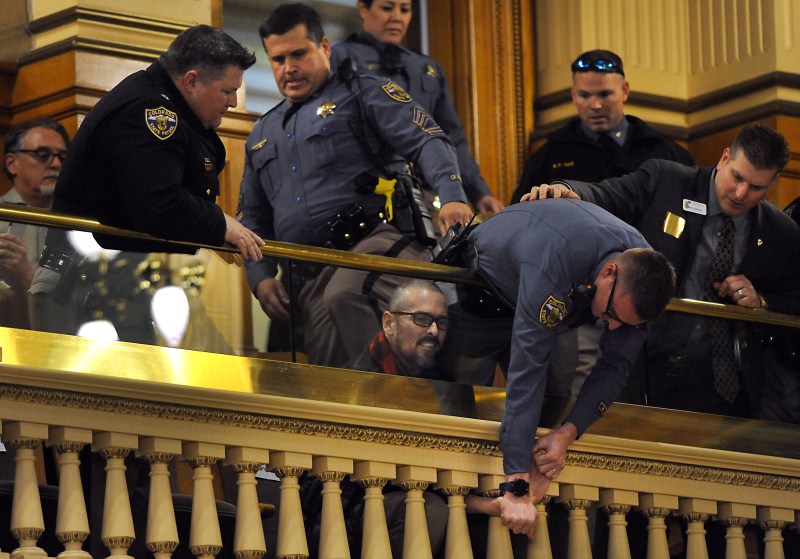 Members of the Colorado State Patrol work to remove a protestor from the balcony of the house chambers just before Gov. Jared Polis entered the room. (Kathryn Scott, Special to The Colorado Sun)

More from the statehouse 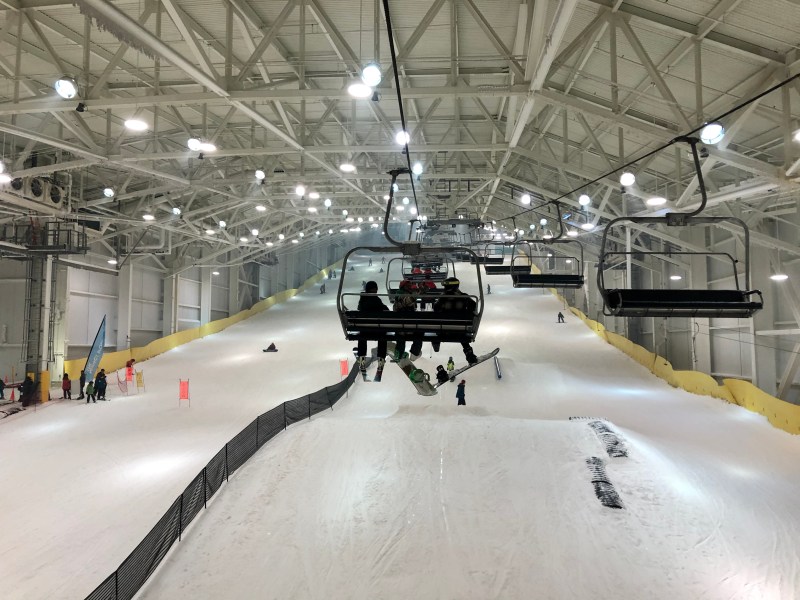 The 1,000-foot ski slope at Big Snow is served by a four-seat chairlift and divided into two runs. (Jason Blevins, The Colorado Sun)

“Who else is doing more to grow the sport? Anyone who wants to argue that point, they should come visit us here and see this diversity.”

Imagine, for a minute, you’re from a big urban area nowhere near a good ski slope (or like I was, you’re from a rural part of Colorado that’s a five-hour drive from most resorts). Would you even consider a ski vacation, knowing how much travel and expense is ahead of you just to spend the trip learning on the bunny slope? That’s one of the problems a massive indoor ski slope in a New Jersey mall is trying to solve, and Jason Blevins went to see it firsthand. He learned why this venture seems to be succeeding where so many others have failed. >> STORY + PHOTOS

“We do know that it would be absolutely gone if the area is mined for limestone. It will be an ex-cave.”

— Richard Rhinehart, one of the cavers who discovered “Witches’ Pantry”

A moment in Colorado beer history came this week with the closure of Boulder Beer Company, the state’s first craft brewery. The brewery’s beer will remain on shelves thanks to an agreement with a contract brewer, but let’s mark the sad occasion by enjoying a Killer Penguin. The Boulder Beer barleywine is marked by sweet fruit flavors and roasted malt and will age for years after the closure.

// In “What’d I Miss?” Ossie laments the potentially explosive communication gap with our significant other — and we even get a look at how he pictures himself in his own mind.

// Jim Morrissey gives us a glimpse of the newborn 2020, replete with diaper and smartphone, as he contemplates the year’s rocky start that might require additional supplies.

// And Drew Litton addresses those Tom Brady-to-the-Broncos rumors in no uncertain terms.

Imagine two academics with specialties in biology and botany, married and stepping away from their teaching careers, diving into fiction. Together. That explains the impetus for Carl and Jane Bock’s “The Swamp Guide,” a Florida Keys mystery whose excerpt introduces us to our protagonist — a guide and part-time sleuth — and a grisly find on a beach. In the SunLit interview, learn how they came to collaborate … and make it work.

// NYT 💚’S COLORADO SPRINGS: The New York Times has made a big deal about its yearly “52 places to go” series, and yet again a Colorado city has made the list alongside places like Paris, Uganda and Cambodia. See what the Grey Lady had to say about their No. 13: Colorado Springs. // New York Times

// PRIVATE EQUITY BEHIND MYSTERIOUS “DOCTOR PATIENT UNITY” ADS: If you watched TV at all last year, you probably saw the slightly bizarre ads sponsored by something called “Doctor Patient Unity” calling out Sen. Cory Gardner for a very specific bill about surprise medical billing. Turns out, private equity firms Blackstone and KKR — who had investments in health care businesses that could be threatened by the legislation — were bankrolling the ads (and going to great lengths to conceal that fact). // Bloomberg News

// WOLVES ARE ON THE BALLOT (AND ALREADY HERE): Hunters in northwest Colorado have reported seeing wolf tracks — confirmed by Colorado Parks and Wildlife — even as the state prepares to vote on the reintroduction of the apex predators. // Craig Daily Press, The Colorado Sun

// RIP IRV: A legendary figure in the world of Colorado sports, reporter Irv Moss, died at the age of 85, just a few years after retiring from a 60-year career covering everything from prep sports to the Olympics at The Denver Post. // The Denver Post 🔑

// FACIAL RECOGNITION FLOPS AT CITY COUNCIL: Futurists and privacy advocates have been warning about the dark side of technology like facial recognition, especially when used in law enforcement. To prove a point, activists ran a test of Amazon’s facial recognition program on Denver’ city council members against a database of 2,000 sex offenders — and 9 of the 13 council members flagged a match. // Denverite

// TWO STORIES ABOUT MALLS: New Jersey malls are getting massive indoor ski slopes. But here in Colorado, the Glenwood Springs Mall is trying to find its identity after yet another tenant relocated, and the Cherry Creek mall has decided to punish its patrons stop letting shoppers have a free hour of parking. // Post-Independent, BusinessDen

Today’s thing comes from Sun writer Kevin Simpson. Got a thing? Send it to things@coloradosun.com and you could be published in a future Sunriser!

Why You Might Like It: If you ever read Jack Kerouac’s “On the Road” or studied the Beat Generation, you know that Neal Cassady played an important role in that movement — and that Denver was his stomping grounds while he made his mark on the writers who defined the era. (Fun fact: Cassady also drove author Ken Kesey’s converted school bus that carried his “Merry Pranksters” across the country.) The Birthday Bash celebrates that history with poets, speakers and reminiscences from Neal’s son, John Allen Cassady, and others. This year, the David Amram Quartet headlines the celebration with music featuring the artist who played with an array of musicians from Bob Dylan to Thelonious Monk.

You can also get a head start on the proceedings with a 3 p.m. walking tour in which host John Hayden will explore some of Cassady’s haunts, starting at the Mercury. Email him at haydenpryor@msn.com to save a spot. You can also learn about the effort to create and install a life-sized statue of Cassady and Kerouac in Denver.

It’s hard to believe that this was our first full week back at work after the holidays, but 2020 is now undeniably underway.

I know you all probably have your New Year’s resolutions long figured out. Some of you may have already abandoned yours at this point.

Here’s an easy one: Tell 10 people you know about The Colorado Sun. Forward them this newsletter and help spread the word. You’ll feel great and can cross a resolution off your list for 2020 before the midpoint of January.

Have a fantastic weekend. See you back here on Monday.

Energy
The Associated Press
51 minutes ago