Good morning and good March, folks! It’s a big week in Colorado, so let’s get a few things straight about voting:

OK, we’ve got coronavirus, cute dogs and cats and a staggering amount of money in politics to get to, so let’s sanitize these hands already, shall we?

From rationing masks to polishing emergency plans, here’s how Colorado hospitals are preparing for the coronavirus

“We’re seeing members of the public just coming in and taking masks. They’re not really there for treatment. They’re just there to take the free mask.”

— Lyle Moore, the director of emergency preparedness for the Colorado Hospital Association

Let’s get real here: Hoarding surgical masks will not make you safer from coronavirus, but it will make it more likely that health care workers and the most vulnerable patients get it. As John Ingold writes, conserving masks is just the most visible sign of how Colorado’s hospitals are preparing for an influx of patients with COVID-19 aka coronavirus — all while dealing with an already difficult flu season. Click through for some bonus tips that will actually help you stay healthy. >> STORY + TIPS

Colorado donors have shelled out millions to presidential candidates. Here’s who they’ve supported most. 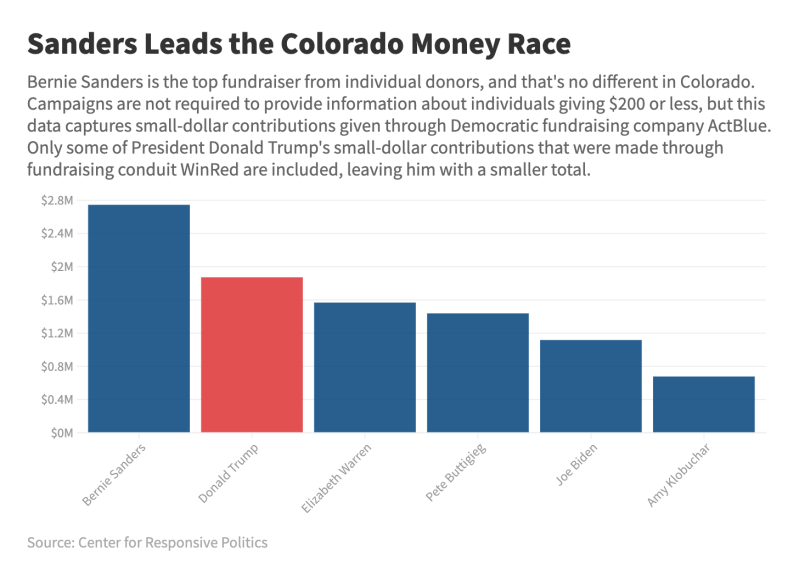 Sen. Bernie Sanders has raised $2.7 million from Colorado donors since last February from a wide base of small-dollar donors. That’s just one of the facts in Sandra Fish and Karl Evers-Hillstrom’s breakdown of donations — including the runner-up in campaign donations from Colorado, Donald Trump. >> ANALYSIS + CHARTS

+ LAST-MINUTE RUSH OF TV SPENDING: $9.4 million has been spent on nearly 32,000 TV ads targeting Colorado voters, and you get one guess as to which candidate has been the biggest spender. >> ANALYSIS

++ BENNET RUNNING FOR REELECTION AND MORE FROM OUR EVENT: Did you miss The Sun’s conversation with Sen. Michael Bennet on Friday, where he confirmed he’s running for reelection, credited social media for the rise of Bernie Sanders (and the death of his own campaign) and more? Watch the whole thing and read Jesse Paul’s recap here. >> STORY + VIDEO

Colorado lawmakers want to stop dogs, cats from being euthanized in shelters for lack of space

Chevy, a Lab-mix puppy, is carried by Misty Vincent at La Plata County Humane Society. The dog was transferred from an overcrowded facility in Texas. (Jerry McBribe, The Durango Herald)

About 89% of all animals that ended up in Colorado shelters in 2018 found a home, which is great news. But Senate Bill 164, as Moe Clark writes, would establish a “standard of care” aimed at prohibiting dogs and cats from being euthanized for reasons other than illness, injury or putting other animals at risk. >> BILL EXPLAINER

// IS THE NYT’S SUCCESS BAD NEWS FOR JOURNALISM? This is a thinker to kick off this section, but it’s an important one. The New York Times is booming, but as the Times’ new media columnist Ben Smith — a former fierce competitor of the Times — writes, that success might be crowding out other forms of journalism from growing, something other media types have been warning about in recent months.  // New York Times, Guardian, Nieman Lab

HERE’S THE THING: If you subscribe to the NYT or WaPo or The Atlantic or any other national news outlet, but you don’t subscribe to a local news source, I urge you to think about how you’re putting your money to work. Local outlets like The Sun cover the things that are the most impactful for the way you live, work and play every day — and because we’re so laser-focused on Colorado, your support goes much, much further. Invest in your community for as little as $5/month, starting right here.

// PUEBLO REINVENTS ITSELF (AND ITS POLITICS): NPR has been spending a lot of time down in Pueblo, and this piece about the reinvention of the city’s economy after steel and the ripple effects of that change is particularly fascinating. // NPR

// MUMPS AT KEYSTONE: There have been 26 mumps infections, mostly among employees, at Keystone Resort — a pretty major outbreak considering that the entire state had 67 cases in all of 2019. // Summit Daily

// PRODUCTION UP EVEN WITH A REGULATORY CRACKDOWN: Bloomberg News reports that there’s been an oil and gas bonanza in Colorado even after the state tightened regulations last year. // Bloomberg News

// LAYOFFS LOOM AT UNC:  As many as 65 people are expected to be let go at the University of Northern Colorado this spring. People have questions, starting with the school’s $5 million budget deficit. // Greeley Tribune

// WHAT WILL BECOME OF THIS MIDDLE SCHOOL’S GIANT MISSILE? There aren’t very many school campuses that can boast a decommissioned Nike Hercules surface-to-air missile as its primary decoration. David Gilbert has the story of the effort to find a new home for the Cold War relic. // The Littleton Independent

You made it to the end of The Sunriser and are ready to hit the week running, full of information.

As always, forwarding this newsletter to your friends and family is a huge way to help us grow our community of informed Coloradans (or you can just point them to coloradosun.com/newsletters).

Have a great day and see you on Wednesday!

A new podcast, a rescue sled, an avalanche education app and a guidebook offering mellow tours are some recent innovations offered by Colorado skiers after last year's deadly avalanche season.

Therapists, psychologists and others complain they have to wait months to get approval to take Medicaid patients – at a time when Colorado is trying to increase the number of providers who serve needy patients.

State water engineers removed stones in a ditch, which directed more water toward Twin Lakes homes and less toward a proposed luxury community.