Hello! There’s a pretty good chance you are already focused on your weekend shopping/skiing/traveling/decorating/wrapping/baking, so I’m already grateful that you opened this newsletter at all.

I’m so grateful, in fact, that I’m going to jump right into the news so you can breeze through it and move on with your day!

So let’s hoard this 3M Invisible Gift Wrap tape already, shall we? 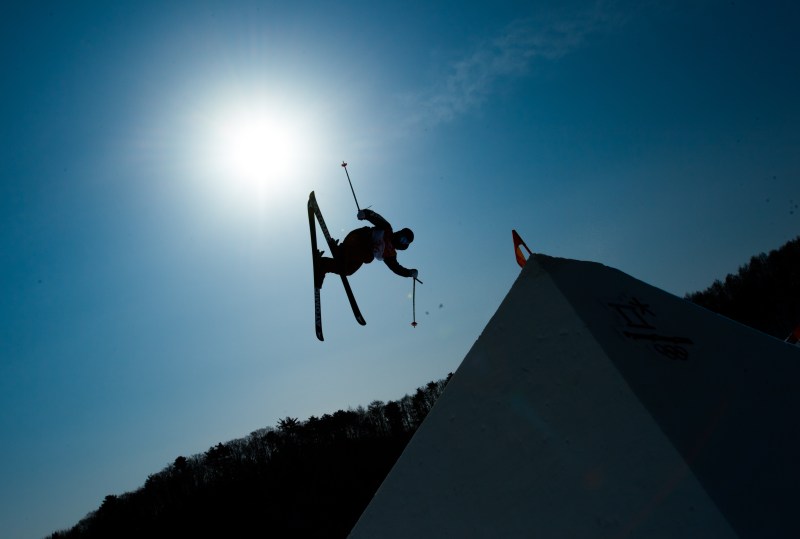 Gus Kenworthy may have been raised in Telluride — the home base from which he helped establish the U.S. as a halfpipe and slopestyle skiing powerhouse — but he was born just outside of London and holds dual citizenship with the U.K.

INTERVIEW: Jason Blevins talked to Kenworthy about getting older in a tough sport, how his mom factored into his choice and how the skiing world has reacted to his big jump.

Tourist trains are all the rage in Colorado, from the Polar Express to murder mysteries 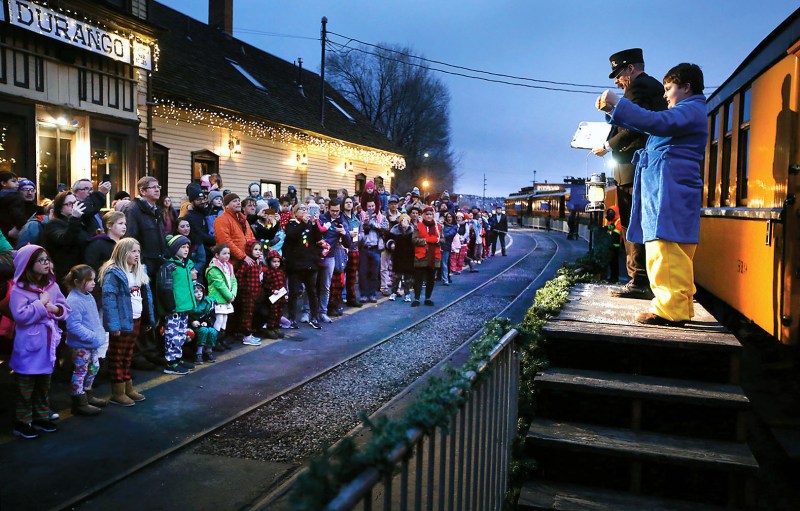 Passengers wait to board the Durango & Silverton Narrow Gauge Railroad Polar Express train at the depot in Durango. (Jerry McBride, Special to The Colorado Sun)

The most popular train in the state right now might be the Polar Express (aka the Durango & Silverton Narrow Gauge Railroad), but as Sue McMillin writes, the wide variety of train-based tourism is keeping parts of Colorado’s rural economy chugging along.

One of Gov. Jared Polis’ signature accomplishments of the last session was passing a reinsurance program that will reduce health insurance costs for thousands of Coloradans. But a new estimate that put the program’s projected impact on the state’s general fund at 800% more than initially projected have reignited the debate over the future of the program.

ANALYSIS: John Ingold explains four numbers that will help you understand the controversy that will be a huge part of budget talks for months to come.

“I want to talk to the department to find our what the differences are in the fiscal note that we had attached to the bill last year, the campaign promises that were made during this summer and this fall, and what the reality is going to be now that it’s being implemented.”

Sports betting in Colorado starts in May, but the first full year of wagering is not expected to meet the minimum volume for the state to begin transferring money to the Colorado Water Plan, which has up to $40 billion of need.

STORY: Jesse Paul looks at the new projections and talks to lawmakers about how the expected shortfall will impact the budget for Colorado water projects.

Colorado’s seven representatives in the U.S. House followed party lines in the historic vote to impeach President Donald Trump on Wednesday. But each member had very different things to say about their votes.

STORY + VIDEO + GRAPHICS: Watch video from each member of the delegation, from Ken Buck’s defense of executive privilege to Jason Crow invoking the founders saying “we would have no kings or dictators.”

+ LATEST IMPEACHMENT NEWS: Here’s a good look at how things will work as the impeachment proceedings move to the Senate for trial. But after Senate Majority Leader Mitch McConnell told reporters he would do everything in his power to quickly acquit the president on Tuesday, House Speaker Nancy Pelosi said she would hold back sending the charges to the Senate until she was certain rules were in place for a fair trial. // NBC News, NPR, The New York Times

“People always say they’re sorry — we’re sorry for your loss, sorry for the statement we made — make it your life work to prove it. Do something different. Advocate for good.”

— John Castillo, father of Kendrick Castillo, who was killed in the STEM School shooting in May, to KDVR about Chuck Bonniwell’s comments 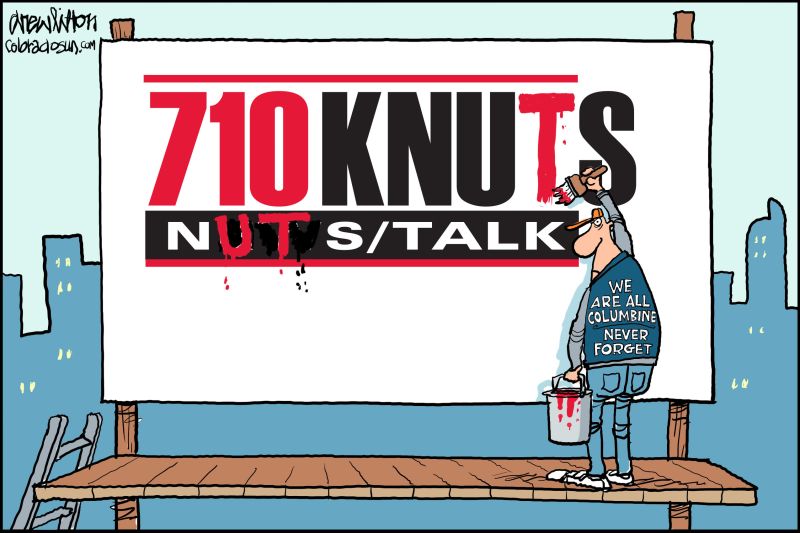 // Drew Litton takes issue with the comments of the KNUS radio hosts booted from the airwaves referenced above — especially in a state where “we are all Columbine.”

// It’s so easy to get lost in the latest respectful terminology, but as Ossie and Myra uncover in this week’s “What’d I Miss?” it really is the thought that counts (If you’ve spent much time on East Colfax near Pete’s Kitchen, check out Cori Redford’s watercolor backgrounds this week).

This time of the year, special Colorado beers hit the shelves, and the 2019 offerings don’t disappoint. Wiley Roots in Greeley rolled out six variants of its big porter, Imperial Somethin’, including a sugar cookie edition that is not to be missed. And find more holiday-themed beers at Hops & Pie in Denver on Saturday when the pizza and beer joint taps a dozen or so big stouts.

Finally, if you’re headed to the mountains this weekend, stop at Outer Range in Frisco. The brewery is hosting its third anniversary party with the 12 Beers of Christmas, which range from hazy IPAs to imperial stouts.

An asteroid that destroys most of humanity. An alien emissary that looks like a giant cucumber with three eyes and six arms. A man whose personality has been preserved after his death, kept company by artificial intelligence. “A Once-Dead Genius in the Kennel of Master Morticue Ambergrand” packs all this and more into a single sci-fi excerpt. And in the SunLit interview, author Gary Raham explains how it just wasn’t coming together … until he planted his tongue firmly in cheek.

// SIGN ME UP:  There is yet another weird (and environmentally friendly) way to deal with a human body (remember the Arvada entrepreneur and his alkaline hydrolysis business?) that could be made explicitly legal in Colorado: Composting. Please plant a tree in me when I’m gone. // CPR News

// CHRISTMAS CROC CRISIS: OK, “crisis” might be too strong a word, but I’m still marveling that Crocs are not only back but they are in such high demand that they’re having trouble shipping in time for the holidays. // Denver Business Journal 🔑

// WEWORK LOCAL FALLOUT: The spectacular burnout of one-time unicorn WeWork is beginning to have local impacts, as the company pulled out of a planned location for four floors of 1660 Lincoln St. in downtown Denver. // BusinessDen

// REUSE MORE COOL BUILDINGS LIKE THIS: One of the oldest standing structures in Greeley (a grain elevator more than 100 years old) is now a cocktail bar and craft distillery — in yet another sign that Greeley is growing up fast. // Greeley Tribune

// PHONE TRACKING IS EVEN CREEPIER THAN YOU THOUGHT: Sorry, but this story might ruin your weekend. Reporters at The New York Times were sent a file containing the “anonymized” location data of 12 million Americans over a period of several months, tracked by their phones. With that data, they quickly identified individuals (because even if the data doesn’t have your name attached, who else is driving from your home to your job every day?) and highlighted the ways the data could be used by foreign spies, blackmailers, domestic abusers or even your own employer (say, to notice if you used your lunch break to go out on a job interview). And all of it is legal, unregulated and in the hands of a few private companies that sell it to just about anyone who pays for it. // New York Times

Why You Might Like It: Sure, pretty much everyone fires up Google Maps or Waze these days to get from one place to another. But if you’re planning a holiday road trip anywhere in Colorado, make sure to check CDOT’s COtrip.org first. The powerful mapping site not only has your expected online map features, but it also tracks road conditions, average road speeds, closures and even lets you peep through live cameras all over the state so you can see how good or bad the roads are for yourself. Even though the chances of a White Christmas are very low outside of the high country, this should be an essential part of your travel planning.

OK, that’s all folks! Thanks for spending some of your busy Friday with us. Now go start tackling that list!

Drive safely, start whipping up your first batch of eggnog and we’ll see you back here on Monday.

The shootings have caused additional strain in a school community that, like others across the country, has been navigating a tumultuous period defined by the COVID pandemic and activism around social justice issues

The new JOLTS data is out and the state’s numbers are all over the place. Plus: It’s Small Business Saturday, older workers' resources and more.

Crime and Courts
The Aspen Times
3:00 AM MST

Lauren Boebert apologizes to Muslims after her remarks about Ilhan Omar

Politics and Government
The Associated Press