Good morning from the rat race. I’ve returned from a short visit to the plains, and am now back in the land of constant sirens, abundant broadband and not nearly enough people waving kindly at each other in traffic.

I had a fantastic time in Yuma, especially reading up on your responses to our feedback survey (which is still open for anyone who didn’t get to it already). I’m working on synthesizing some of your thoughts to share with the class here in a future Sunriser, but I wanted to say thanks for weighing in.

But seeing as we have a newsletter practically bursting with news, let’s shuck this cob already and get to it, shall we? 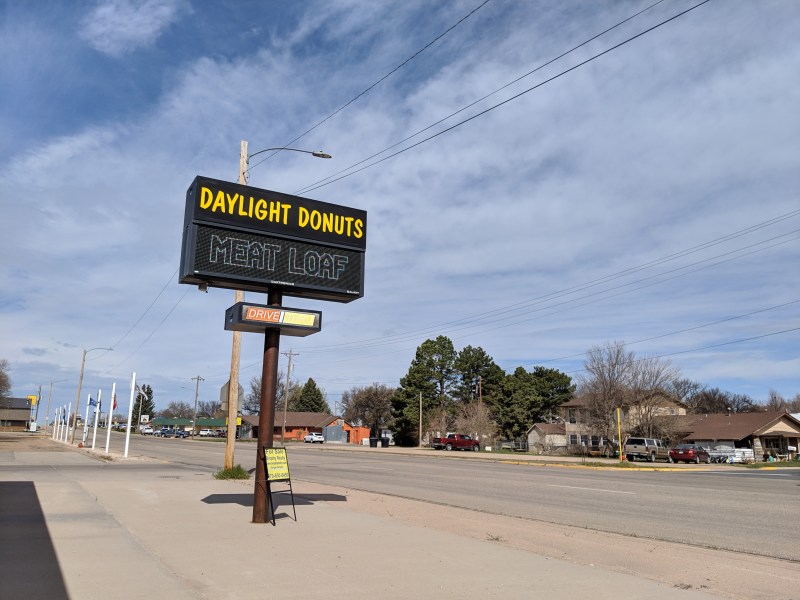 Daylight Donuts advertising the Monday special in Yuma on April 28, 2019. And no, it’s not a meat loaf-flavored donut, I checked. (Eric Lubbers, The Colorado Sun) 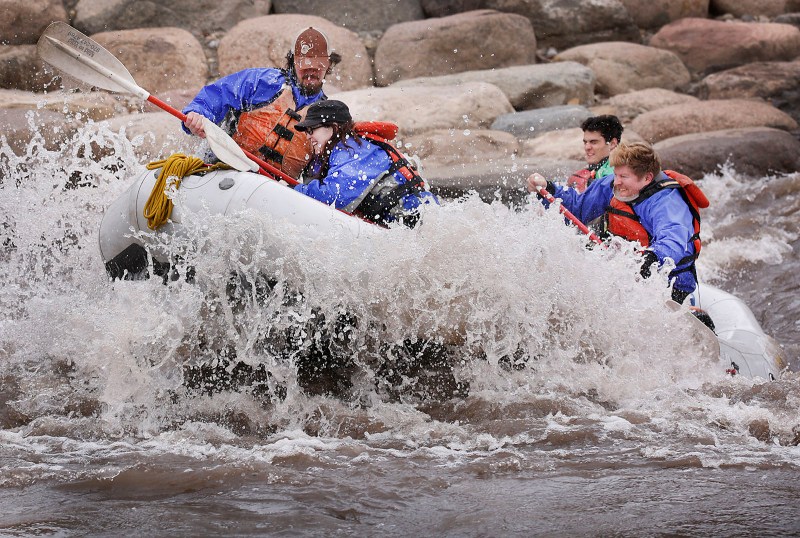 Benj Mickel, rafting guide with Mild to Wild Rafting & Jeep Tours, hits the rapids in the Durango Whitewater Park with a group of boaters on April 15, 2019. (Jerry McBride, Special to The Colorado Sun)

No matter how you slice it, this was a big winter. Skiers relished an abundance of snow that led to one of the best snowpacks in years. But as that snow starts to melt, the state’s rafters are getting excited to ride that runoff — even if they’re a little antsy that the water could be 2 Fast 2 Furious.

>> Read Dan England’s excellent breakdown of how the river recreation industry is preparing for a potentially huge season.

Colorado lawmakers won’t finish their calendar. Now Democrats have to decide which bills to let die.

“We’re on track with ‘Game of Thrones.’ Everything’s at risk of dying.”

We are edging closer to the end of the legislative session and as the clock winds down, the pressure is ratcheting up on lawmakers to get through their list. John Frank and Jesse Paul have a great breakdown of what is left, what is likely to die and where the cracks are forming in the coalitions at the statehouse.

>> Get ready for the week ahead here.

Colorado is set to invest more in affordable housing than ever before. And it nearly spent even more.

The issue of affordable housing has been top of mind for Colorado residents of all stripes for years. Sun contributor Brian Eason examines what could be the largest ongoing investments in affordable housing in state history (even though some housing advocates are disappointed).

>> Read about the three bills that could make the most impact here.

// Back in February, we reported on Colorado’s worst-in-the-nation rate of vaccinations among kindergarteners and Gov. Jared Polis’ criticism of a bill that would remove the state’s very loose personal-belief exemptions. Then just a few weeks ago, we reported on how that initial bill had been softened under the dome. Now, as the legislature winds down, Bente Birkeland reports that Polis has told an audience that he would not sign the bill in its current form. // The Colorado Sun, CPR News

// Illegal Pete’s attempt to convert to a Delaware LLC was blocked because the burrito chain’s name (which comes from the founder’s father) has a “negative connotation.” But according to a lawsuit, the same board has previously allowed “Sexxymofo Inc.” and “Hate Media LLC.” // KUNC

// Denver is the rattiest city west of the Mississippi that isn’t named “San Francisco,” according to one study. // 9News

// When I was in Yuma, I heard all about the school’s comeback kid, Paul Brophy. Brophy battled testicular cancer while managing a 5-2 record and 2.62 ERA as a pitcher this season. What you won’t read in this great piece by Dan Mohrmann on Brophy’s battle is that his classmates, in a well-received show of support, made Livestrong-style bracelets emblazoned with “ONE BALL PAUL” in a gesture fitting for a teenage boy who has to deal with that particular type of cancer. // CHSAANow

// Natasha Gardner has a big takeout on the future of Aurora, Colorado’s third-largest city, that particularly focuses on the ways that it, unlike Denver, can still get (physically) bigger. // 5280

// Greeley has the best drinking water in the country (according to a 2017 national competition). The Tribune looked at how exactly they keep the water tasting great and how new oil and gas regulations will affect the process. // Greeley Tribune 🔑

// I’m going to end this section with something I repeat often, but it needs to be said again: White supremacy is real, connected (via forums like 8chan that helped radicalize and then rooted on the New Zealand mosque shooter), widespread and increasingly violent. Here are just a few recent stories, including a few with Colorado connections (but first, read this about the four victims of the weekend’s shooting at the Chabad of Poway synagogue in California):

If there’s one thing you need to understand that ties together the threads of most of the recent mass shootings in the U.S., it’s “Replacement Theory” — a mishmash of sexist, racist conspiracy that “white culture” is somehow threatened by immigration and multiculturalism. This New York Times story does a very good job of explaining what it is, why it’s completely bogus and why it’s fueling violence in the U.S. and abroad (aided by YouTube algorithms). And this column in The Washington Post explains how it may be spread via new technologies, but the core of its xenophobic anti-Semitism stretches back to medievel times. I could go on and on here, but the best thing you can do is get familiar with these movements and be vigilant.

There is a bright side to all of this. Remember after the Pittsburgh synagogue shooting, when our Denver community came together? Here’s to hoping for more moments like that.

Why You Might Like It: This one is an easy recommendation. I’ve been a fan of Lake Bell for years (she wrote, directed and starred in a great movie called “In A World…” back in 2013 that you should also check out). Her new show is about a New York couple who moves to a failing farm in Nebraska, and while the premise seems like it’s right on the verge of hokey, a cast that includes Dax Shepard, Ed Begley Jr., David Koechner and of course Colorado’s own Pam Grier works with some smart writing to create a funny show that has some promise.What’s your thing? If you have something that you just can’t stop raving about that you’d like to share, send us an email at things@coloradosun.com and you could be published in a future Sunriser!

We’re going to have a busy week covering the final days of the Colorado legislature. Remember, you can always email us questions and story ideas to tips@coloradosun.com. We love hearing from our readers.

In the meantime, please keep spreading the news about The Colorado Sun. We rely on our members to thrive, so the more we have (sign up here) the more journalism we can share with you.