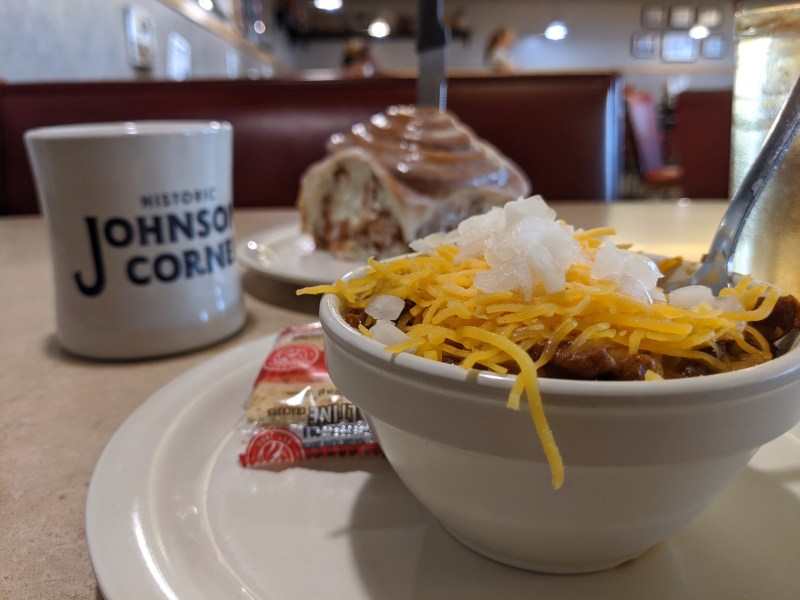 A Colorado school lunch special – red chili and a cinnamon roll – at the world famous Johnson’s Corner in Johnstown on Feb. 27, 2020. (Eric Lubbers, The Colorado Sun)

Good morning and happy Friday! Thanks to everyone who came out to our News & Brews event last night with KUNC in Loveland! As you can see above, I pre-gamed the festivities at Johnson’s Corner with what I (and other Colorado natives I’ve talked to) consider a “school lunch special,” aka a giant cinnamon roll and a cup of red chili.

This particular pairing seems to have existed only in the cafeterias of Colorado elementary schools, based on a lifetime of baffled looks I’ve received when I describe it to anyone who grew up somewhere else. In the interest of testing this theory, I’ve made a special two-question survey. Please fill it out for this very important non-scientific research and I’ll share the results next week.

I could go on and on about how great it was to get out of Denver and meet devoted Sunriser readers (and some people who had never heard of The Sun), but we’ve got news to get to!

So let’s dip this cinnamon roll already, shall we?

More than 40% of Coloradans don’t have a retirement plan at work. The state seeks to change that.

“I do believe every single working American needs to do this right now because we’re all seeing the results of not doing it.”

— Pete Turner, founder of the fresh-burrito chain Illegal Pete’s, which offers 401(k) benefits to its employees

When I was eating at Johnson’s Corner yesterday, I heard a couple of truck drivers talking about retirement. “Well, the plan was to just get out of debt by the time I turn 65,” one of them said, “but that’s not going to happen.” “Yeah, hard to do when you keep having to buy s—,” his dining companion helpfully added. It’s workers like them — as well as retail and service jobs — that a state plan suggested by a new report is targeting. Tamara Chuang explains the state of retirement in Colorado, how a state plan would work and why small businesses are already voicing concern. >> STORY

Despite reforms, the number of children dying of abuse and neglect in Colorado hasn’t subsided 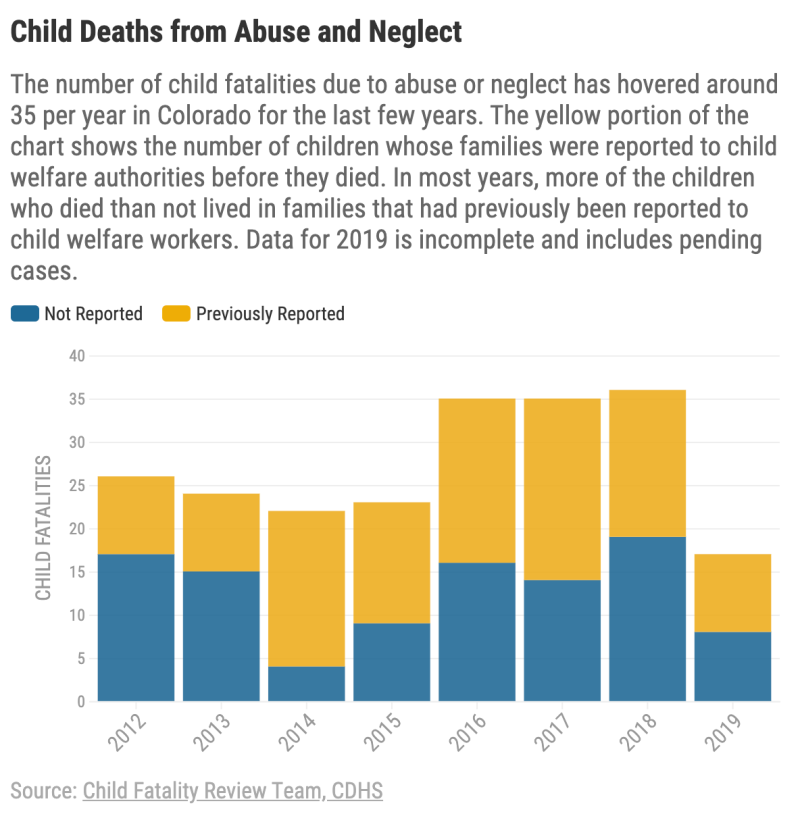 This is a tough, but extremely important piece for you to read. Jennifer Brown, working with 9News’ Kevin Vaughan, explains how the cycle of public outrage — and subsequent reforms — over the deaths of abused children has not actually led to fewer kids dying. I’ll let Jennifer’s lede explain. >> STORY

In the past five years, 146 children died in Colorado from abuse or neglect. You haven’t heard about almost any of them.

The children are listed — not by name but by case number — on spreadsheets published online under Colorado law by the state human services department. Only a few of their deaths made the news, inspiring a round of outrage and calls for action. But the vast majority went unnoticed — part of a tally of child fatalities that has not subsided despite governor-appointed task forces, a statewide child abuse hotline and millions of public dollars to hire more caseworkers.

+ WATCH: Jennifer Brown interviewed Colorado child protection ombudsman Stephanie Villafuerte about her call to investigate and follow up on every child death from abuse. >> VIDEO

Colorado lawmakers have passed a death penalty repeal. What will Gov. Polis do with the men on death row?

Colorado is Gov. Jared Polis’ signature away from becoming the 22nd state to repeal the death penalty after a bill to end capital punishment passed the legislature and is headed to Polis’ desk. But the repeal, once it becomes law, is not retroactive. This means the governor will be faced with what he calls a “very weighty decision” about whether to grant clemency to the three men on Colorado’s death row. Jesse Paul has more on what the governor is saying — and not saying — about the decision. >> STORY + ANALYSIS

“There are 80,000 people moving to the state every year, and 90% of them say they spend time outdoors. This is a train wreck happening before our eyes.”

— Dan Gibbs, the director of the Department of Natural Resources

Colorado’s 2,800 rescue volunteers — a pool that is getting older and smaller — respond to 3,600 calls for help each year. A bill sponsored by a bipartisan coalition of high country lawmakers is hoping to figure out how the state’s 46 search and rescue teams are coping with a spiking population and what the government can do to help. Jason Blevins has the story. >> STORY

How Bernie Sanders became the favorite in Colorado: A loyal fan base that kept the fire alive after 2016

Bernice “Bernie” Sanders Rosa, 2, laughs with her mother, Jackie Rosa, during an Our Revolution event on Feb. 16 at the Mercury Cafe in Denver. (Moe Clark, The Colorado Sun)

As Super Tuesday bears down, new polling for Colorado shows Bernie Sanders — who won the 2016 caucuses in the state — with a large lead over his rivals in the Democratic presidential primary. As our politics team writes, that isn’t an accident. John Frank, Jesse Paul and Moe Clark dig into how Bernie’s grassroots support base hit the ground running after 2016 — and what challenges they still face to secure the nomination. >> STORY

+ COLORADO POLL: Bernie has a big lead in a poll from Magellan Strategies, with Elizabeth Warren polling right on the edge of the 15% needed to claim delegates from the state. >> MORE POLLING DATA

Author Michele Morris was preparing to write a travel memoir when her husband collapsed in the Madrid airport. That soon set her on a course to write about a very different journey. In this excerpt from “Poco a Poco,” she walks the reader through that experience with heart-wrenching detail. In the SunLit interview, she explains how her journey led to a desire to help others. 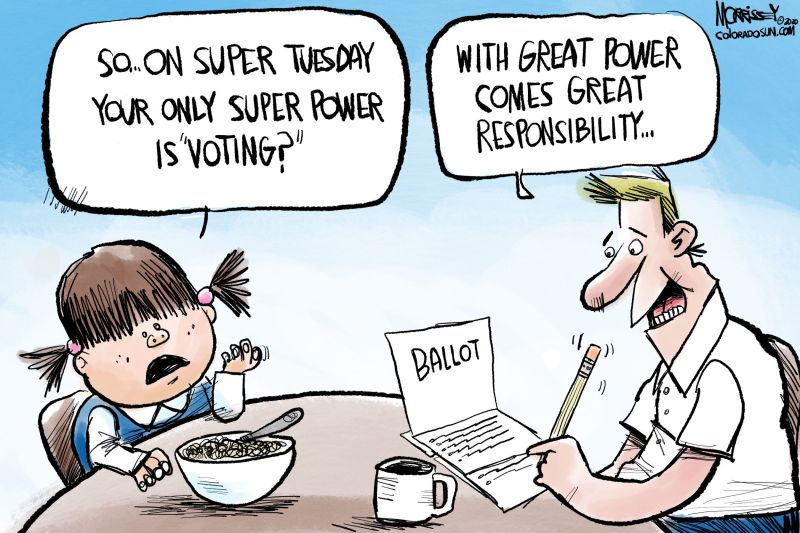 // With Super Tuesday on the horizon, Jim Morrissey had a conversation with his young daughter that inspired him to draw this panel about civic duty — and a kind of superhero origin story.

// Americans love a good bootstrap story. But in many cases, the truth behind supposed self-made super successful people is more myth than fact. In “What’d I Miss?” Myra emphasizes that it’s OK to ask for help — with some limits.

// With the coronavirus triggering a run on surgical face masks, Drew Litton found some folks that have a different use for them as spring training fans the flames of baseball rivalry. 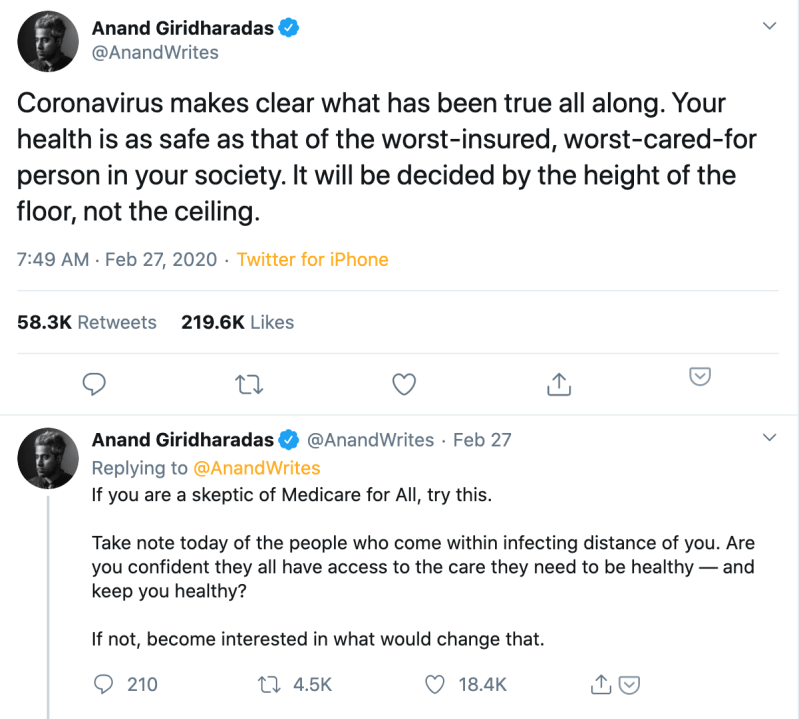 // A LITTLE MORE ON CORONAVIRUS: The worries over coronavirus have supercharged the most hot-button issue of the presidential campaign — health care. Author and MSNBC contributor Anand Giridharadas has a thread that even the biggest skeptic of single-payer health care would have a hard time arguing with and Vox lays out how America’s inconsisent sick leave policy could make any outbreak worse. Here in Colorado, officials are telling citizens to prepare for an outbreak like they would a snowstorm and DIA says they have a plan ready to go but aren’t expecting immediate danger. // @AnandWrites, Vox, The Denver Post 🔑, CPR News

// NO PLACE TO GO BUT DIA 9News reporter Allison Sylte hardly ever travels, so as part of the station’s observation of Denver International Airport’s 25th anniversary, they sent her out there for a day. The result is a hilarious Instagram story filled with the joy of discovery of things like the birds nesting in the canopy and a woman chugging a bottle of wine at security. // 9News

// WHEN RURAL HOSPITALS CLOSE On some levels this story has a bit of a “duh” element to it, but it’s interesting to learn that when rural hospitals close, ambulance response times to emergencies slow. And, FWIW about 8% of Colorado rural hospitals are at medium-high risk of financial distress, but none have closed. // KUNC

// RALPHIE, NEW RALPHIE BOSS The University of Colorado announced the retirement of mascot Ralphie V at the close of the football season. The mascot handling program this week announced it has a new boss leading the hunt for a replacement buffalo. Taylor Stratton has been promoted to lead the Ralphie program. // Daily Camera

// THE NEWEST VOTERS About 24,000 young Coloradans will vote for the first time in the Super Tuesday primary, including 17-year-olds who will turn 18 by the time of the November election. So what issues are on their minds? Many of the same ones on everyone else’s, though you may hear the words “student loan debt” a bit more often. // CPR News

And just like that, this week (and month) are nearly over! For the shortest month of the year it’s been full of challenging, impactful journalism that we hope has left you feeling more informed about your state.

I’m not going to beat around the bush: We need your support to keep producing this kind of news that you can’t get anywhere else in Colorado. This is the time to help us make change, for just $5/month! Hit that button (it works on phones!) and in about two minutes you will have made a palpable difference in strengthening the democracy of your state. I hope you’ll join us!

LET’S DO THIS. MEMBERSHIP TIME.

Thanks for reading and especially sharing these stories all month.

Have an excellent weekend we’ll see you back here in March!