Good morning and happy Friday! It’s been a busy, busy week. For example, we had a whole election just a few days ago that already feels like it happened a month ago.

We’ve got so much news to digest today, but I want to take a minute for a short lesson on how to make your Colorado Sun experience the best it can be.

We’re constantly working to improve the experience for our users, and we can afford to put readers first because our members are our bosses. We’re not beholden to some faceless corporation looking to squeeze out profits. So if you aren’t already, now’s a great time to become a member. It’s quick and easy and starts at just $5/month.

OK, let’s foam this latte already, shall we?

Colorado’s newest farmers are YouTube-taught, social justice-minded and preaching the gospel of microgreens 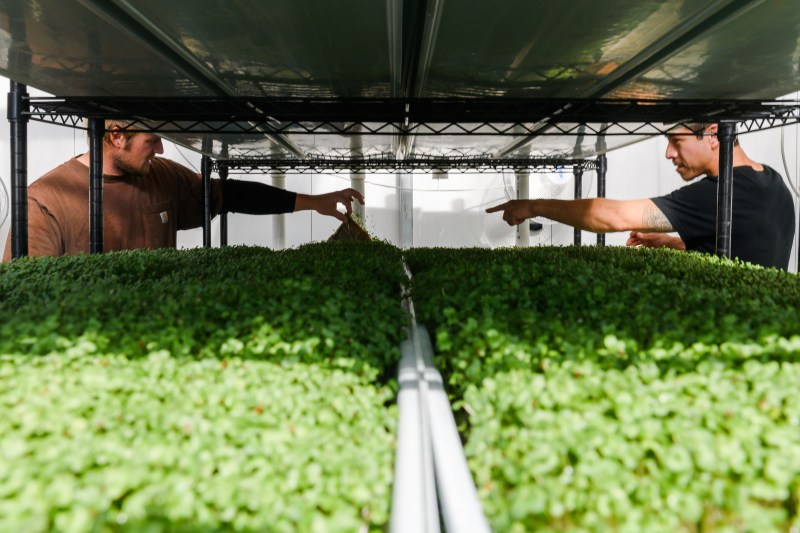 Emerald Gardens microgreens co-owners Dave Demerling, 33, left, of Arvada, and Roberto Meza, 32, right, of Bennett, tend to some of their crop in their hydroponic farm’s greenhouse in Bennett on Tuesday, Nov. 5, 2019. (Andy Colwell, Special to The Colorado Sun)

When you think of Colorado farmers, you likely picture corn and winter wheat growers out in Yuma or melon farmers in Rocky Ford or rows of peach pickers in Palisade. But a new crop (pun absolutely intended) of farmers in the state is helping redefine agriculture in the 21st century. Warning: You’re going to get a hankerin’ for microgreens and kohlrabi after reading this one.

>> Kevin Simpson has the fascinating story of how two Ohio high school buddies reunited outside of Bennett to become first-generation farmers. 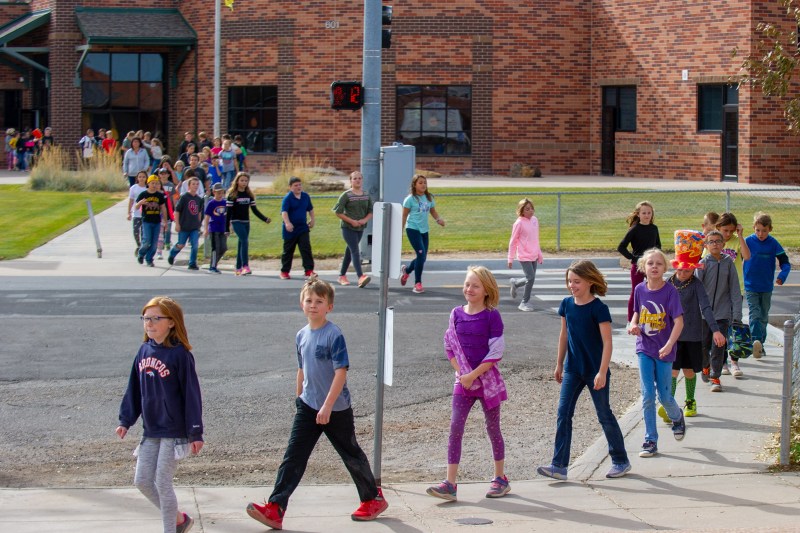 Fowler Elementary students cross Colorado 167 on their way to lunch at the Fowler High School cafeteria on Oct. 23, 2019. Fowler voted in favor of a bond measure that school district officials hope will increase their chances to receive BEST funding. (Mike Sweeney, Special to The Colorado Sun)

Colorado’s state education funding mechanism is broken, and while lawmakers are finally setting out to retool that formula, local dollars are more important than ever. That means the fates of small school districts increasingly rise and fall at the ballot box.

>> Erica Breunlin looks at the rural districts that approved major infrastructure funds on Tuesday — and those that didn’t — and the reasons why districts keep having to go back to locals.

John Hickenlooper didn’t always reimburse travel on private planes, report says. An ethics panel will decide if that was illegal.

Former Colorado Gov. John Hickenlooper on several occasions last year criss-crossed the nation on private planes owned by high-powered businessmen or their companies, at times to conduct state business, but only repaid the owners of the aircraft in one instance.

>> Jesse Paul has more on the major report from the state’s Independent Ethics Commission, including what’s next for the complaint.

Backcountry.com breaks its silence amid trademark lawsuit controversy to apologize and say “we made a mistake”

It took a while, but the CEO of Backcountry.com finally released a statement addressing the controversy and backlash over his company’s trademark lawsuits against small outdoors manufacturers over the word “backcountry” — news broken by The Colorado Sun last week.

>> Read Jason Blevins’ analysis of the response and the questions still unanswered by the statement.

You may not have heard of Lucile Berkeley Buchanan Jones, but in 1918 she was the first black female graduate at the University of Colorado. She wasn’t allowed to walk in graduation and her picture never appeared in the yearbook. But CU prof Polly E. Bugros McLean has charted her family’s life –– and almost literally traced this dynamic woman’s steps –– from slavery in Virginia to the burgeoning black middle class in the American West in “Remembering Lucile.”  And in the SunLit interview, McLean reveals how a headline in the 1993 Rocky Mountain News charted her course for this very personal but also overarching historical work.

Don’t forget to sign up for this month’s book club meeting at 7 p.m. Nov. 18 at BookBar in Denver, where we’ll have author Rory Kress to talk about “The Doggie in the Window.” Have you ever looked at your pup and wondered about its backstory? That’s what launched Kress on a cross-country investigation of breeders, rescuers and even the USDA as she unravels the mystery of where our furry friends come from. The event is free, but please RSVP here or go to coloradosun.com/bookclub for more info and a great deal that can score new Sun members a free book! 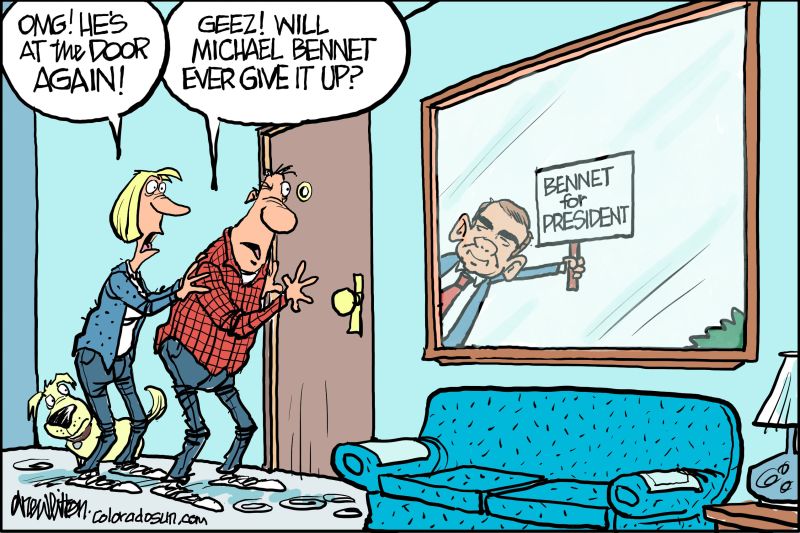 // In “What’d I Miss?” Myra and Ossie have a heart-to-heart about pain and guilt and privilege and why societal changes can sometimes feel so personal.

The countdown is on to “An Evening with Drew Litton.” At 6 p.m. next Wednesday (11/13), he’ll take us through the iconic images that have defined his cartooning career, with backstory, anecdotes and –– wait for it –– CALENDARS! His 2020 edition will go on sale for the first time (at a discount) at the event, which is free for Sun members (search your email for “Drew Litton” to get your access code) and $10 for nonmembers. Get your tickets here.

BONUS: Become an annual Sun member at coloradosun.com/join, enter the code DREW, and we’ll send you a copy of Drew’s calendar for free!

// This is a very impressive work of collaborative journalism. Niki Turner of the Rio Blanco Herald Times and Susan Greene of The Colorado Independent explored a fatal police shooting in Rangely — and the silence from officials in its aftermath. Read Part 1 here, Part 2 here and a powerful editor’s note explaining how the collaboration worked.  // Rio Blanco Herald Times, The Colorado Independent

// A few months ago, I floated the thought experiment of making RTD fares completely free to help encourage more transit riders (and keep more cars off the road). Apparently, I’m not alone in that theory, as Chase Woodruff writes for Westword. In that article, he cites a book called “Free Public Transit: And Why We Don’t Pay to Ride Elevators,” which pretty much sums up the whole theory right there in the title.  // Westword

// Speaking of alternative transportation, Denver will be getting a new protected bike lane north of Wash Park on a stretch of road where 37-year-old Alexis Bounds was struck and killed on her bike in July. But, as always, not everyone is happy about the neighborhood addition. // Denverite

// The 2019 election is still not over in Aurora, where the almost-final vote counts have Mike Coffman winning the race for mayor by just 273 votes, though there are still votes to be “cured.” // Sentinel Colorado

// Effie Krokos got a ticket for playing Frisbee topless in her Loveland front yard in September. But that ticket came months after a federal court ruled that bans on female toplessness were unconstitutional — and now Krokos has been awarded a $50,000 settlement for the wrongful charge of indecent exposure.  // Loveland Reporter-Herald 🔑

// This is a pretty typical prep sports story, I’m just sharing it as a reminder that the Colorado Rocky Mountain School’s mascot is the oyster. // Glenwood Springs Post-Independent

Why You Might Like It: Monday is Veteran’s Day, and among the memorials, parades and races happening throughout the weekend, all national parks will have free admission on Monday. So if you have the day off (or can take one) it might be a good time to check out one of Colorado’s four national parks before winter weather truly sets in (but check the forecast and be prepared, because you never know).

My goodness, what a week. Thanks for spending some of it with us and staying up-to-date on what’s happening all over this big, beautiful state of ours.

Don’t forget, you can always come back and scan these Sunrisers over the weekend when you might have a little more time to digest a story about microgreens.

And I’ll leave you to your weekend by sending you off with one of the sights that greeted me this week living in the shadow of the state Capitol. 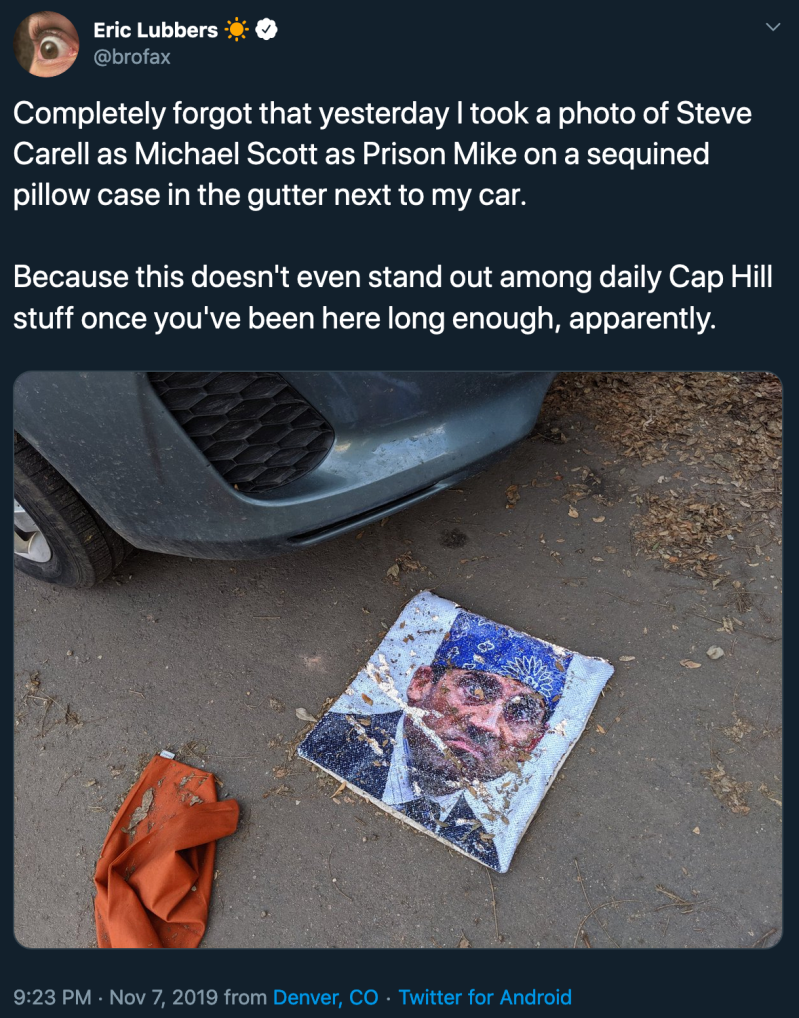 Get some rest and we’ll talk Monday!