Good morning and happy Juneteenth, everyone! (Here’s a pretty great and necessary look at the origins and future of the holiday.)

We are still in the midst of our sorta-birthday week celebration, and I want to say thanks to all of our new members and new email subscribers!

Memberships start at just $5/month, but if you act right now you can get our biggest discount ever on a Newsletters+ membership, which includes access to members-only newsletters The Unaffiliated (Colorado politics) and The Outsider (everything outdoors by Jason Blevins).

(Already a member? Click here to login and hide this message.)

Memberships start at just $5/month, but act now to get our biggest discount ever on our Newsletters+ membership, which includes access to members-only newsletters The Unaffiliated (Colorado politics) and The Outsider (everything outdoors by Jason Blevins).

Thanks for your support!

It’s been one year since The Colorado Sun began publishing impactful journalism for our state and it’s members like you that are helping us build something special.

You are currently a Basic member, but to celebrate a year of existence, we’re offering our lowest rate ever to upgrade to a Newsletters+ membership and get access to members-only newsletters The Unaffiliated (Colorado politics) and The Outsider (everything outdoors by Jason Blevins). Click here, choose “Switch Plan” and use the discount code ONEYEAR to get this deal.

Your premium membership is already helping us grow, but if you’d like to show your support, visit our merch store for hats, shirts, stickers and more (all proceeds go directly to funding more journalism).

OK, enough marketing, let’s slice this apple already, shall we?

JUST IN: Colorado attorney general Phil Weiser has intervened in a $4.3 billion merger between DaVita and UnitedHealth over concerns over coverage for Medicare Advantage plan patients. John Ingold explains the move here.

GOP blasted Democrats for the 2019 legislative session. But they supported nearly every bill that passed, analysis shows.

The word of the year for Colorado’s Republican Party has been “overreach,” as in, “the Democratic majority at the Colorado statehouse overreached with its legislative agenda.” But as a new analysis by Sandra Fish shows, at least one Republican lawmaker supported 96% of the bills approved by the session this year.

>> WHO IS THE MOST BIPARTISAN LAWMAKER IN COLORADO? Sandra’s analysis has some great graphics by Carrie Osgood, including party voting stats for the whole session, a list of the most bipartisan GOP lawmakers and a chamber-by-chamber breakdown of party line votes. It’s a really impressive piece of work you’re going to want to take some time to inspect.

>> JUST SHOW ME THE CHARTS If you want a quick look, we’ve put the charts, plus a little more bonus analysis from John Frank, in their own story here. 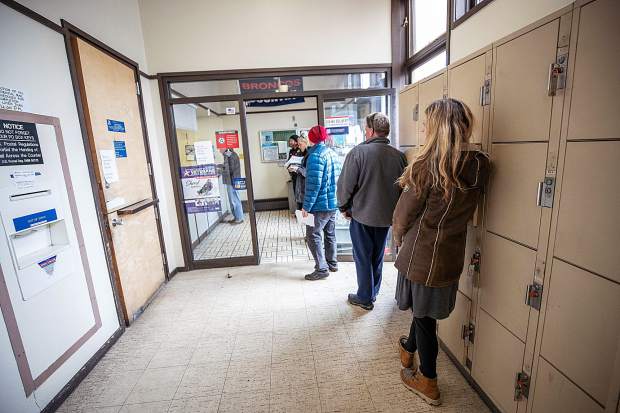 When Nancy Lofholm first reported on the tribulations of mail delivery in Colorado’s mountain towns, the post offices were in the middle of a crush of holiday package deliveries. But even after the Christmas rush, the double whammy of population growth and increasing volume of essential package deliveries (medications, important financial documents and more) is frustrating folks in towns where there is no home delivery.

>> GETTING CONGRESS INVOLVED Nancy’s update includes more horror stories of delivery issues, as well as the essential context of how mountain town economic development and slim staffing at the post office have residents concerned enough to get U.S. Rep. Scott Tipton involved. 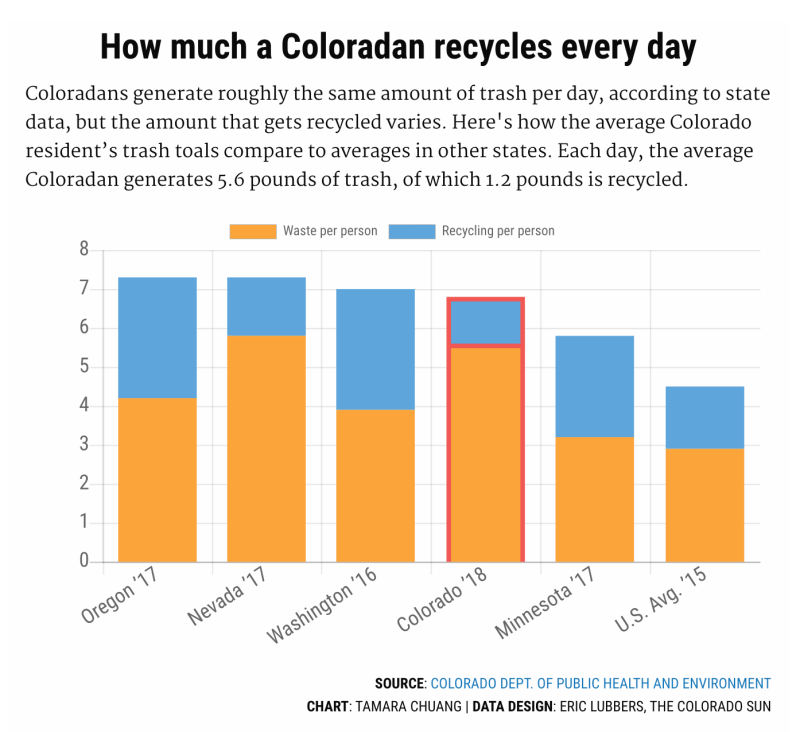 We’ve written about this before, but for such an environmentally friendly state, Colorado is just terrible at recycling. The latest twist comes from a new report that adjusted the formula to calculate how well the state’s consumers are recycling and found that there is some evidence that we’re getting better, but we are still falling massively short of even our own goals.

>> RURAL COLORADO MEETING GOALS, FRONT RANGE LAGGING Tamara Chuang has an extensive data-driven breakdown of the new numbers, plus input from some of the state’s biggest recyclers to give much needed context to the numbers.

There’s a big gap between the public perception of marijuana tax revenues in Colorado and the reality of how much there is, how it’s collected and how it’s allocated. And the dense flow chart the state released didn’t help on the communication front.

>> A NEW PUSH TO SIMPLIFY POT TAX SPENDING Brian Eason has a story about how the state’s budget writers want to prioritize spending on just two issues. Read this one and you can answer all your friends when they ask “What about that pot money?”

The kind of journalism on display above isn’t free. Each one of the stories above took work from reporters, editors, photographers, data designers, digital producers and more to help inform you about how your state works. Please consider becoming a member of The Colorado Sun (starting at just $5/month) to help us keep efficiently producing journalism. Your dollar goes further with The Colorado Sun than almost any other news outlet.

“This resolution feels like control. You’ll call it oversight, but it says you don’t trust us.”

— Heidi Elliott, a member of the STEM board

“They painted these victims as heroes. These children should not be heroes. They should be children — children who never have to step in front of a bullet.”

// Not directly Colorado news, but this is a damning and brutal look at life inside the content moderation workhouses of Facebook and shows the actual human cost of running the biggest communication platform ever created by mankind. // The Verge

// The construction project at DIA’s Great Hall has been delayed for at least three years as contractors deal with design changes, crumbling old concrete and the usual large project bloat. Meanwhile, workers for a DIA contractor are striking over what they say are health and safety issues. // CPR News, Westword

// I don’t know how many times we have to say this: IT’S OK TO ZIPPER MERGE and doing it actually gets everyone where they’re going faster. // Coloradoan 🔑

// Can’t wait for the Broncos to return? How about checking out the Colorado Football Association, a semipro league with teams like the Loveland Elite, the Englewood Eagles and the Pueblo Steel? // Greeley Tribune

// This has been a long time coming: A settlement with the Colorado Attorney General’s office wiped out $1.6 million in student loans from the bankrupt ITT Education Services. // The Denver Post 🔑

// This might be the best piece of primary coverage I’ve ever seen: All 21 Democratic candidates (including Hick and Bennet), on video, answering the same 18 questions. No spin, no polls, no horse-race commentary. I hope there’s a lot more of this throughout this nightmarishly long election. // New York Times 🔑

Today’s thing comes from Sun editor Larry Ryckman. Do you have a thing that you just can’t stop raving about? Send us an email at things@coloradosun.com and you could be published in a future Sunriser! 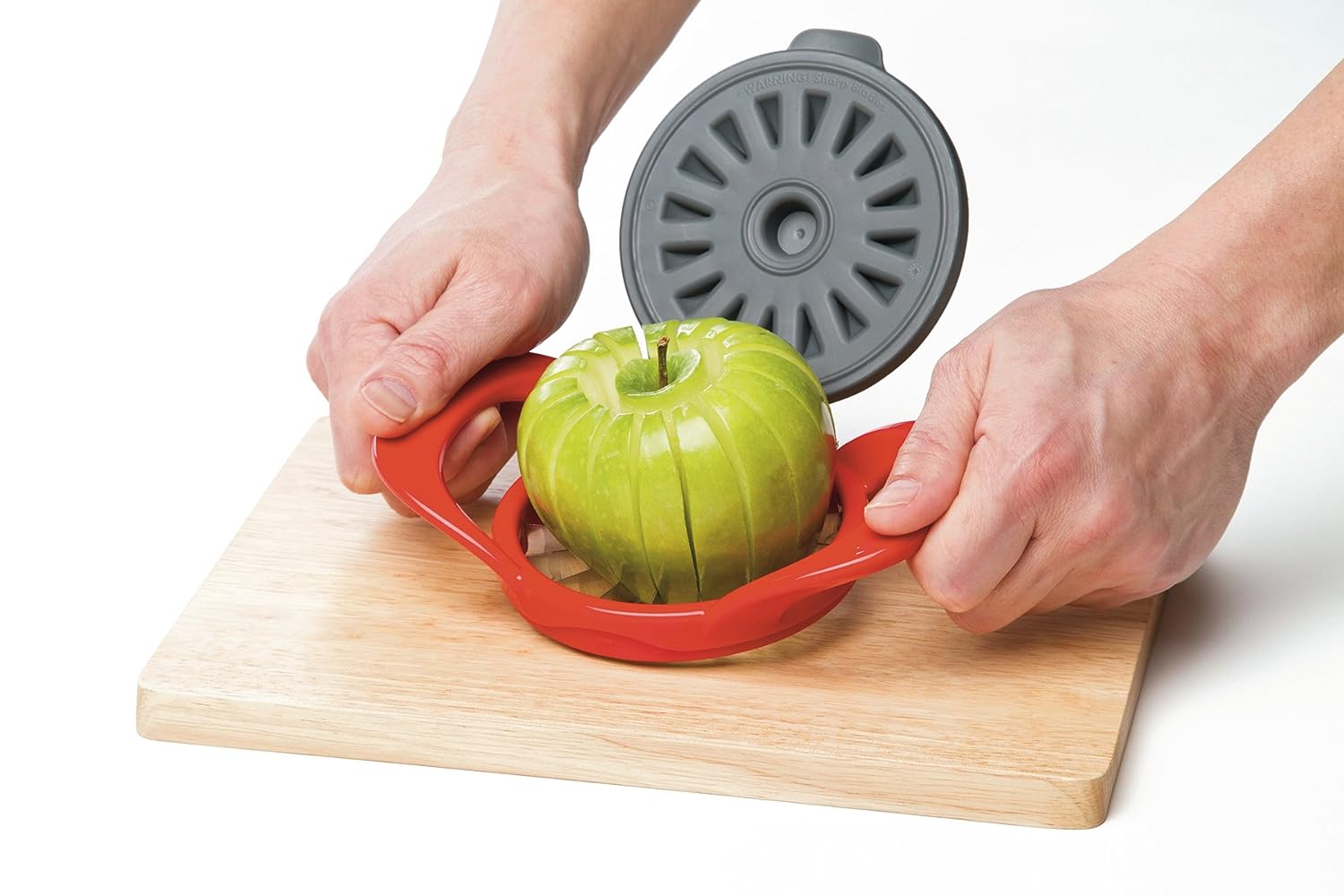 The Thing: A legendary apple slicer

Why You Might Like It: Yes, this is one more gadget for our already-crowded kitchen drawers, but it’s the one I use most. The apple slicer makes perfect apple wedges every time, and it’s much faster (and probably safer) than using a knife. It produces a tidy core that I then drop into the compost bin for the worms. I even enjoy the burst of apple mist as the slicer cuts into the fruit. Sometimes, it’s the little things in life!

(Editor’s note: You can get these slicers just about anywhere, but people seem to love this ~$7 one from Prepworks with a base that helps push the slices all the way out of the slicer)

Looking at my calendar, tomorrow marks the one-year anniversary of the very first Sunriser we ever sent (we’ve written more than 150 since then!). So here’s the sappy, saccharin-sweet part: Thanks not only for reading today’s Sunriser, but for sticking with us for however long you’ve been a part of The Sun community.

Have a great Wednesday and we’ll see you here on Friday for the final day of our birthday celebration!