Good morning and happy Friday! I’m currently being serenaded right outside my window by the rare songbird that isn’t scared away by construction equipment or drowned out by Denver traffic. It’s a pleasant, Disney-fied start to what I think we all hope is a great weekend.

Today’s Sunriser is 5 pounds of breakfast burrito in a 2-pound tortilla, so we’re just going to dive right in.

Let’s tickle these ivories, shall we?

Southern Colorado is learning a tough lesson: This much snow is a headache 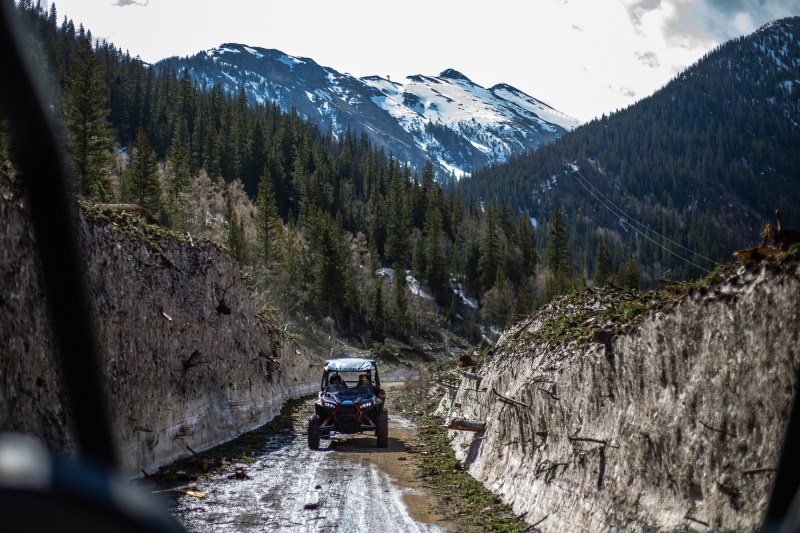 There’s no getting around it: southwestern Colorado was absolutely buried in snow this winter. That snow made for great skiing … and one of the most destructive avalanche seasons on record. The “midwinter” level of snowpack hanging into June combined with the swaths of destruction left by avalanches have those expecting the first waves of summer tourists worried, as early events are canceled and popular trails remain blocked.

>> WHEN IN DOUBT, SELL GAWKING TOURS Heather Sackett reports from Silverton how locals are trying to balance safety with preserving the summer economy — including by running tours of the avalanche damage for curious tourists.

>> MEANWHILE, SKI TOWNS RAKED IN SALES TAX REVENUE Jason Blevins crunched the numbers and found that all that snow resulted in record levels of sales-tax revenue for slopeside communities — and hope that some of that cash will help take on issues like affordable housing.

It’s Promise Tracker update day! John Frank has been keeping tabs on 128 discrete promises made on the campaign trail by the governor and he just finished an exhaustive update.

>> HIGHLIGHTS + WHAT’S NOT MOVING Click through to see the areas where Polis made significant progress during his first full legislative session, and what hasn’t received much — or any — attention.

A Colorado climber stepped over newly dead bodies to summit Everest. He’s still wrestling with what it all means. 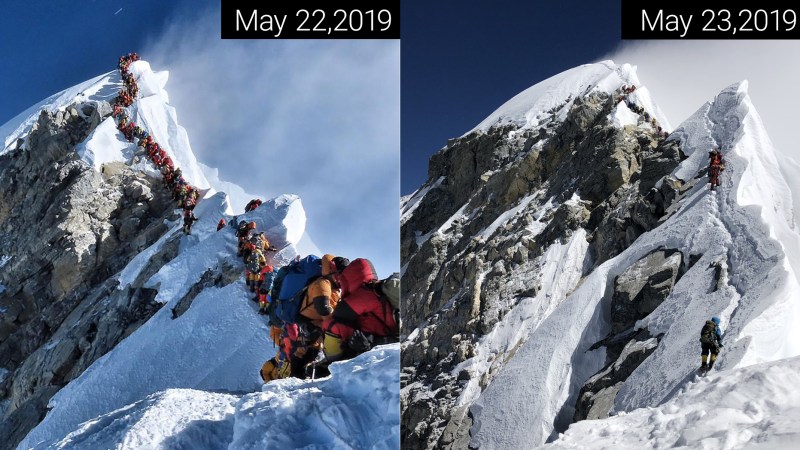 “I did not mentally prepare to see people who had died less than 24 hours ago,” said Dr. Peter Lowry, a Golden radiologist who summitted Mount Everest the day after the now-viral photograph of the crowded slog to the top was taken.

>> HARROWING TALES FROM THE TOP OF THE WORLD Jason Blevins talked to Lowry and world-class mountaineers about the lure of Everest and the local economic factors that are contributing to more climbers with less experience dying on the quest.

>> MORE: Climbers don’t climb alone — their families are right there with them. Carol McKinley has the story of Peter Lowry’s parents, Susan and Bruce, and what they went through as they waited 36 hours for news of their son’s ascent.

A World War II reenactor holds the U.S. flag as at dawn on Omaha Beach on June 6, 2019 during commemorations of the 75th anniversary of D-Day. (AP Photo/Thibault Camus)

There are very few, if any, people left who remember going to a movie house to watch a silent film with a live score. But with new generations discovering the artistry of auteurs like Harold Lloyd, Buster Keaton and Charlie Chaplin, a small group of Colorado musicians has made accompanying the films into a passion project.

>> EVERY SCREENING IS ITS OWN PIECE OF ART If you need a break from the hard news, click through to read Howie Movshovitz’s excellent piece on the artistry and dedication of this group of musicians. 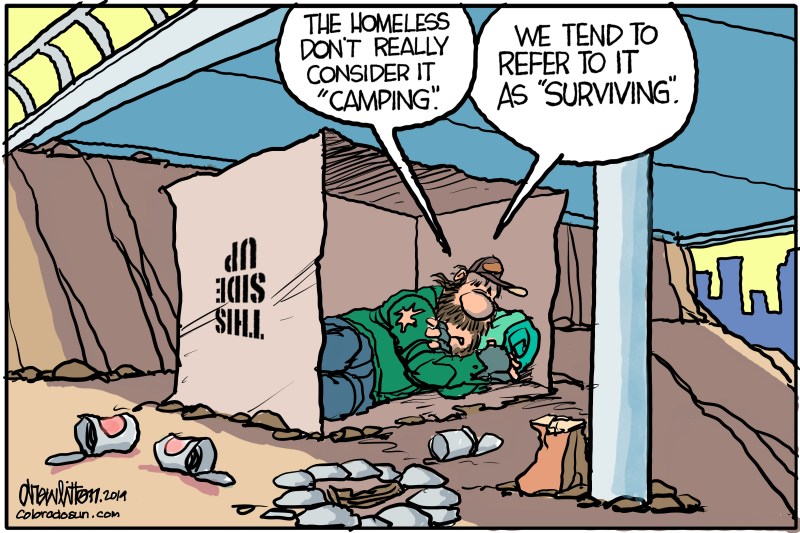 // Denver recently voted overwhelmingly to keep its “camping ban.” This week, Drew Litton has something to say about that. And it comes on the heels of Sun writer Jen Brown’s examination of homeless initiatives and whether they’re putting the city on the road to “better.”

// In “What’d I Miss?” we’re starting to wonder if Ossie is ever going to be an online video star — or even passably good. As writer Alan Brooks and artist Cori Redford continue to flesh out the strip’s characters, we find that even Ossie’s closest friends seem firmly from the school of “If you can’t say something nice…”

From our SunLit maestro Kevin Simpson: Colorado author Tiffany Quay Tyson, a Mississippi native, has long admired Flannery O’Connor and the Southern Gothic literary tradition. That affinity shines through in her gripping excerpt from “The Past Is Never,” in which she explores the power of place through a childhood adventure in a forbidden quarry. And she’s wonderfully expansive in her SunLit interview, giving readers a glimpse of her literary inspiration, the reality behind many cursed locales and how she trusted her instincts — and crossed her fingers — when it came to deciding whether to cut or include certain parts of her novel.

The Avery Invitational beer festival is Saturday and (surprisingly) it looks like tickets are still available. I love this festival and sadly can’t make it this year. But I took a peek at the pour list and here are the two beers I would try first. California’s Alvarado Street Brewery’s Contains No Juice is one of my favorite hazy double IPAs. Its restrained bitterness and big fruit flavor makes you think it’s juice. And North Carolina’s Fonta Flora is bringing an intriguing witbier made with oranges and Earl Gray tea.The brewery is one of my favorites from back home.

BONUS: Try Culmination Brewing. It’s a hot new Portland, Oregon, brewery that I missed on my recent trip. They are pouring Native Oregonism, a collaboration with Ale Apothecary.

// Colorado Parks & Wildlife has euthanized a bear confirmed to have bitten a woman while she walked on Hunter Creek Trail near Aspen. A necropsy found its belly stuffed with birdseed. By this point, it feels like we shouldn’t have to say it, but a fed bear is a dead bear. Take your easy-to-score food sources, like trash and dog food and bird feeders, indoors or you could be contributing to the death toll of “nuisance” bears. // The Aspen Times, The Colorado Sun

// It’s a (rare) water year, and seeing the dam spillover that comes with an excess of water is thrilling. Over at Morrow Point Dam, near Cimarron, dual streams of water have been spilling 350 feet down since May 30 and will keep the dramatic show going until early next week. Barker Dam in Nederland will let go a stream in the next day or two. // Montrose Daily Press, Daily Camera

// The runoff isn’t all fun and photo ops. For the first time in the mayor’s memory, Ouray has set up sandbag stations to protect the town from the rising Uncompahgre River. // Ouray County Plaindealer

// You might be pretty proud of that post-secondary degree (for which you’ll be paying off loans for the next 30 years) but when it comes to pride, try graduating from Summer Bee College, which the Colorado State Beekeeping Association calls into session this weekend at the Garfield County Fairgrounds in Rifle. // Grand Junction Sentinel

// The smell of singed hair is on the wind. It’s cattle branding season on the Eastern Plains. // Sterling Journal Advocate

// There are some pretty dramatic photos out from the tornado that touched down near Sedgwick on Memorial Day. // Julesburg Advocate

// “We were getting tired of saving kids and decided we’d rather corrupt them.” Forty years later, iconic Wax Trax Records is still under the ownership of Duane Davis and Dave Stidman, the social services workers who decided to switch career paths oh so long ago.  // CPR News

Today’s thing comes from Colorado Sun writer Kevin Simpson. What’s your thing? If you have something that you just can’t stop raving about that you’d like to share, send us an email at things@coloradosun.com and you could be published in a future Sunriser!

Why You Might Like It: Emphasis on “might” here. If there were ever a prequel (admittedly, an R-rated prequel) to the hit show “Criminal Minds,” this would be it. And if you’ve watched “Criminal Minds,” you know it’s a meticulously well-done drama featuring some disturbingly depraved characters. “Mindhunter” doesn’t pull any punches, in subject matter or dialogue, but its strong ratings on Rotten Tomatoes (mid- to high-90s from critics and audiences alike) speaks to its appeal. Storylines revolve around a pair of FBI agents from the Behavioral Sciences unit who travel the country in the late 1970s teaching “road school” — a crash course educating police departments on the psychological elements of crime.  In their spare time, the agents interview convicted violent offenders in hopes of developing the early versions of criminal profiles. If you like this genre, now is a perfect time to get started, as the series has been renewed for a second season.

And just like that, we’re done. As we close in on the one year anniversary of our not-yet-full staff standing in Civic Center Park announcing the existence of The Colorado Sun to the world, I want to pause and say thank you for support, whether it’s by reading our work (👍), sharing our stories with your friends and family (👍👍) or financially through a membership (👍👍👍👍), you’re the reason we can keep producing journalism that Colorado needs.

So keep reading, sharing and supporting and we’ll see you back here on Monday!

Have a wonderful weekend!