Against all odds, it’s Friday! I mean, I know how linear time works, but this week has had so many ups and downs that I wasn’t going to take anything for granted.

Before we send you into your weekend, we have some breaking news in a criminal case that has gripped the country, in-depth information about Colorado’s first coronavirus cases and news about a tiny nonprofit ski hill, plus explainers for the state’s proposed public option, how tomorrow’s party caucuses work (and why they’re different from the primaries) and so much more.

All that in one snapshot of one portion of one week of the news coverage that The Colorado Sun provides! If this news impacts your life, it’s time to support it. Just $5/month will help us grow the community of trusted, meaningful news around the state. Click (or tap!) here to get started.

So let’s thoroughly wash these hands already, shall we?

The case of Gannon Stauch, the 11-year-old El Paso County boy who has been missing since January, took a turn on Monday when his stepmother, Letecia Stauch, was arrested in Myrtle Beach, South Carolina. The Colorado Sun broke the news yesterday that an employment offer for Letecia from Mountain Ridge Middle School, where she was going through orientation, was rescinded just days before the boy went missing. >> STORY

“We have been preparing for this moment. We are now in execution mode.”

It seemed only a matter of time, but yesterday Colorado announced its first two presumptive cases of COVID-19, aka coronavirus, both from people who had recently traveled outside the country, including a man who drove from DIA to Keystone, where he skied for at least two days before falling ill. Both patients are recovering in isolation, but as Colorado’s ability to test for the virus expands — only 93 tests have been conducted with two presumptive positives and many more negatives — more cases appear to be expected. >> STORY

+ DISPATCH FROM AN EERILY QUIET HONG KONG: Aurora-based international freight pilot Nic Morrey tells the story (complete with photos) of his trip to a spookily empty Hong Kong, where his temperature was taken by remote cameras and hotel staff nearly every time he left his room amid growing fears of the spread of COVID-19. >> COLUMN

Colorado’s other pandemic: The 1918 flu and the lessons learned — or maybe not — for coronavirus

“Some of the social leaders were having parties, as if they were making a statement that we’re immune to this, it won’t get us. People just don’t change their modes of behavior easily, even if it makes good sense to do so.”

Colorado was in the grips of a viral pandemic 102 years ago, but how much have we really learned since then? The science is better, for sure, but human nature hasn’t changed all that much. Writer Kevin Simpson looks back at the flu pandemic of 1918 in Colorado, and the difficulty of containing an airborne illness. Spoiler alert: Gunnison, with a bit of luck, figured it out. >> STORY

— The pay raise Lincoln Community Hospital could get under the Colorado public health insurance option, compared to what it currently charges privately-insured patients.

Colorado hospitals are livid about lawmakers’ proposal for a public option — now known as the Colorado Affordable Health Care Option. But some rural hospitals could be in line to make a lot more money. Health reporter John Ingold explains why at least some of those hospitals are wary of that extra dough. >> STORY

A decade into the opioid crisis, Colorado hospitals have changed the way they treat opioid-exposed babies. And it’s helping.

Colorado hospitals came up with a new way to care for babies born with opioids in their system and going through withdrawal, and the results have been dramatic. The average time a drug-exposed baby spends in the hospital has dropped to 6.5 days from 17 days in a two-year period. Instead of regular doses of pharmaceuticals, babies are getting more cuddling and moms are getting more help. Reporter Jennifer Brown attended an Aurora conference full of doctors and child welfare caseworkers to get the details. >> STORY

If you’re looking for a quick breakdown of the big stories from Tuesday’s primaries, including the size of Bernie Sanders’ margin of victory, what voters’ priorities are and just how much Michael Bloomberg spent, Jesse Paul has you covered. >> THE NUMBERS

+ HOW WAS COLORADO’S FIRST PRIMARY SINCE PROP 17? John Frank looked at how Colorado handled its first primary to include unaffiliated voters since the passage of Prop 17 and found a massive increase in turnout (like 15 times more), but the election didn’t come through on other goals of its proponents. >> STORY

+ DELEGATE COUNTS ARE A-CHANGIN’ With two of the eligible candidates dropping out of the race — and a couple hundred thousand new votes counted — our original projection on how Colorado’s delegates will be split has been evolving since Tuesday.  See the latest here (and enjoy this little animation showing the change below). >> DELEGATE COUNT

What you need to know about Saturday’s Colorado caucuses, where Hickenlooper faces test in U.S. Senate race 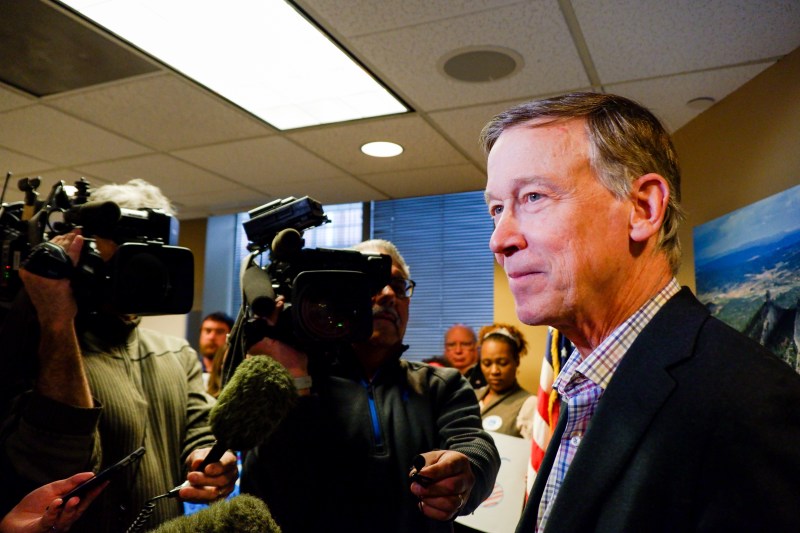 Former Colorado Gov. John Hickenlooper turns in his signatures to secure his spot in the 2020 U.S. Senate Democratic primary on Feb. 19, 2020. (Jesse Paul, The Colorado Sun)

If you thought we were going to have a break from politics now that Super Tuesday is behind us, I’m sorry. But if you are invested in the U.S. Senate race (or who is going to be running for state House and Senate seats) tomorrow’s party caucuses are the Big Show. John Frank explains everything you need to know. >> EXPLAINER

+ ABORTION BAN: A group that wants to ban abortions in Colorado after 22 weeks of pregnancy delivered its petitions to the Secretary of State’s Office this week in the hopes of putting the question on the November ballot. More than 124,000 valid signatures are required, and the Due Date Too Late campaign was cutting it close with upwards of 135,000. >> STORY

+ 16-YEAR-OLDS MIGHT GET TO VOTE (IN ONE KIND OF ELECTION): Chalkbeat Colorado has the latest on a bill working its way through the legislature that would give some high school students the ability to vote for the people on their school boards. >> STORY 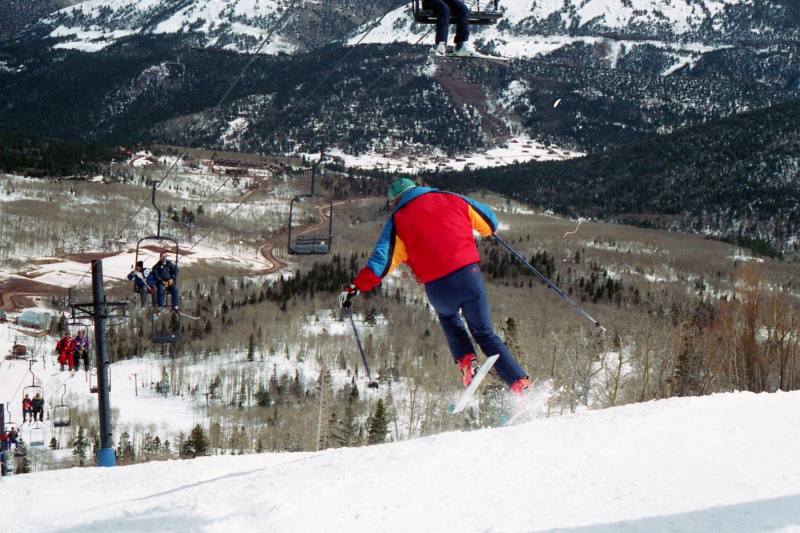 One lift. 56 acres. A whole bunch of volunteers. Jason Blevins has the story of the Cuchara Valley ski area in southern Colorado, which has been shuttered for two decades after a parade of failed investors, but may see skiers next winter as they try to create a nonprofit ski hill. >> STORY

+ GARDNER, LWCF CAPITALIZE ON TRUMP TWEET FOR PUBLIC LANDS: In the span of a single tweet, President Donald Trump reversed his administration’s budget statement to cut funding for the Land and Water Conservation Fund and pledged to sign a bill fully funding it in perpetuity. Jesse Paul has more on what that means — one Democratic senator called the switch a “miracle” — and how Sen. Cory Gardner will use it in his reelection campaign. >> STORY

In between covering Colorado’s beer scene, I write about politics. (OK, fine, it’s the other way around.) And this week, I needed a good beer to help the politics go down. Cerebral Brewing’s Don’t Call Me Sir saved me. The voluptuous hazy double IPA — a collaboration with Casey Brewing and Blending from Glenwood Springs — bursts with flavors of tropical fruit and guava. It’s my favorite beer of the year so far. Find it on tap at the Denver brewery.

Kelsey Freeman was a 22-year-old college student from Carbondale when she first trekked across central Mexico to research indigenous people. She returned as a Fulbright Scholar drawn to the study of migration, and her vignettes about refugees and personal analysis make her new nonfiction volume, “No Option but North,” compelling reading. It comes out in April, but you can get a sneak peek here, and in the SunLit interview, also learn how what she imagined as an exhibit turned into a book.

// Jim Morrissey is still trying to figure out how in the world Colorado chooses its presidential preference, what with a primary election where the math seems to change by the hour and caucuses on top of that. Can anyone really argue his vision doesn’t make just as much sense?

// Speaking of elections, do you think you know what an unaffiliated voter is? Some may be just undeclared party-liners, but in “What’d I Miss?” Ossie casts his first presidential primary ballot with a whole different set of criteria.

// Rounding out our election-themed collection this week, Drew Litton looks in on couples counseling for those who feel the Democratic primary was anything but unifying.

// WHY IS DENVER SO BAD AT THIS? There are all kinds of good outcomes — including fewer greenhouse gases — when people compost, and a Denver pickup program makes it fairly easy for residents to participate. Yet only 13% of eligible households signed up. // 5280

// SPECIAL DELIVERY When a Castle Pines family was out of town and having work done on their home, the front door blew open and their golden retriever, Catcher, sauntered into the neighborhood. Fortunately, an alert and compassionate FedEx driver didn’t mind adding another package to his route. // FOX31

// HE’S NO PUNXUTAWNEY PHIL, BUT… What appears to be the year’s first bear sighting, possibly signaling an early spring, has been spotted near Bayfield. Usually they don’t venture out of hibernation until late April or May. // Durango Herald

// EMPHASIS ON COMMERCE Since 2000, the population has more than doubled to more than 58,000 in this city on the outskirts of the Denver metro area, prompting new efforts to attract amenities like restaurants and other commerce to, yes, Commerce City.// KUSA

// DIALYSIS RULES HAVE SAVED LIVES AND MONEY: The Colorado Sun reported last year on the change to rules that let undocumented immigrants in Colorado get regular dialysis — instead of waiting until they were on death’s door and getting expensive ER treatment. May Ortega at CPR checked in a year later to see the lives changed by the new rules. // CPR News

I’ve been thinking about this tweet from Colorado Community Media reporter David Gilbert all week as I’ve gazed at the sunshine outside while I worked on elections result graphics. 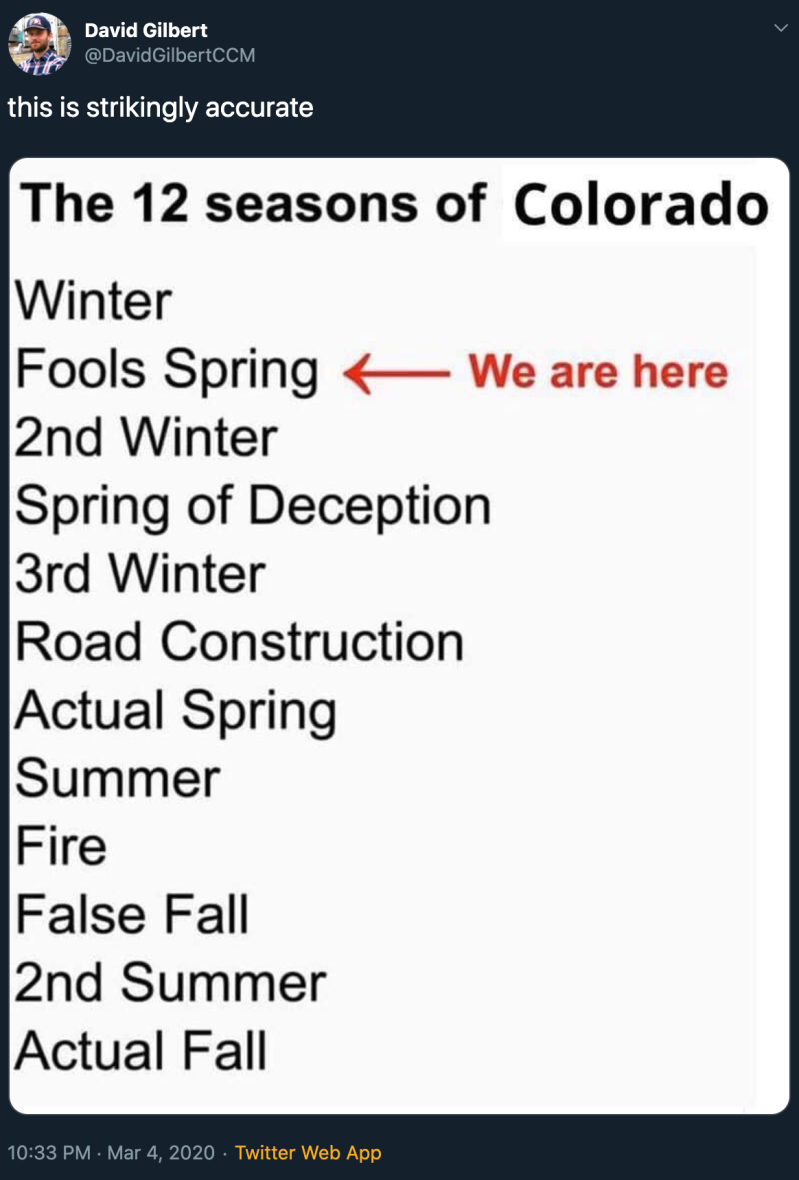 It doesn’t matter how many winters I go through in Colorado (I’m on my 36th at the moment) I’m always suckered in by this first spasm of spring.

So I hope you take advantage of the sun and do something relaxing and soul-nourishing after a busy week. Just make sure you wash your hands and don’t touch your face while you do it.