Good morning! I’m not sure what comes after Super Tuesday (Wistful Wednesday?) but whatever it is, we’re in it.

The Sun had a late night chasing down election coverage and crunching some very complicated numbers (more on that below), but I promise we have some non-election stories for you today in case you’re politicked-out.

Haste makes waste, so let’s calculate these delegates already, shall we?

Bernie Sanders won yesterday’s presidential primary in Colorado handily, nabbing the lion’s share of the popular vote and the state’s delegates. But it was the performance of his competitors that left the biggest impression. Joe Biden spent almost no time in the state, but is positioned to come in second place and pick up a sizable number of delegates. Michael Bloomberg, after spending millions of dollars in Colorado, would have scored the second-most delegates based on The Sun’s exclusive projections — but then he dropped out of the race this morning. Meanwhile, Elizabeth Warren, who had been polling in a strong second place, finished at the bottom of the pack. >> RECAP + CONTEXT

+ THE COMPLICATED MATH OF DELEGATES: Awarding Colorado’s 67 delegates isn’t as easy as glancing at the popular vote and slicing up the pie accordingly. I took the eight-step formula the party uses and converted it into a big gnarly spreadsheet, then John Frank, Sandra Fish and I scoured the voting results to create a projected delegate counter (plus a cool, blocky visualization of how each candidate performed in each congressional district). >> DELEGATE COUNTER

Note: this graphic has been updated to reflect Michael Bloomberg’s exit from the race. We can calculate how his statewide delegates will be distributed, but we won’t know for a while how his remaining 10 congressional district delegates will be allotted. In other words, this count is a projection and will keep changing as we get more information. 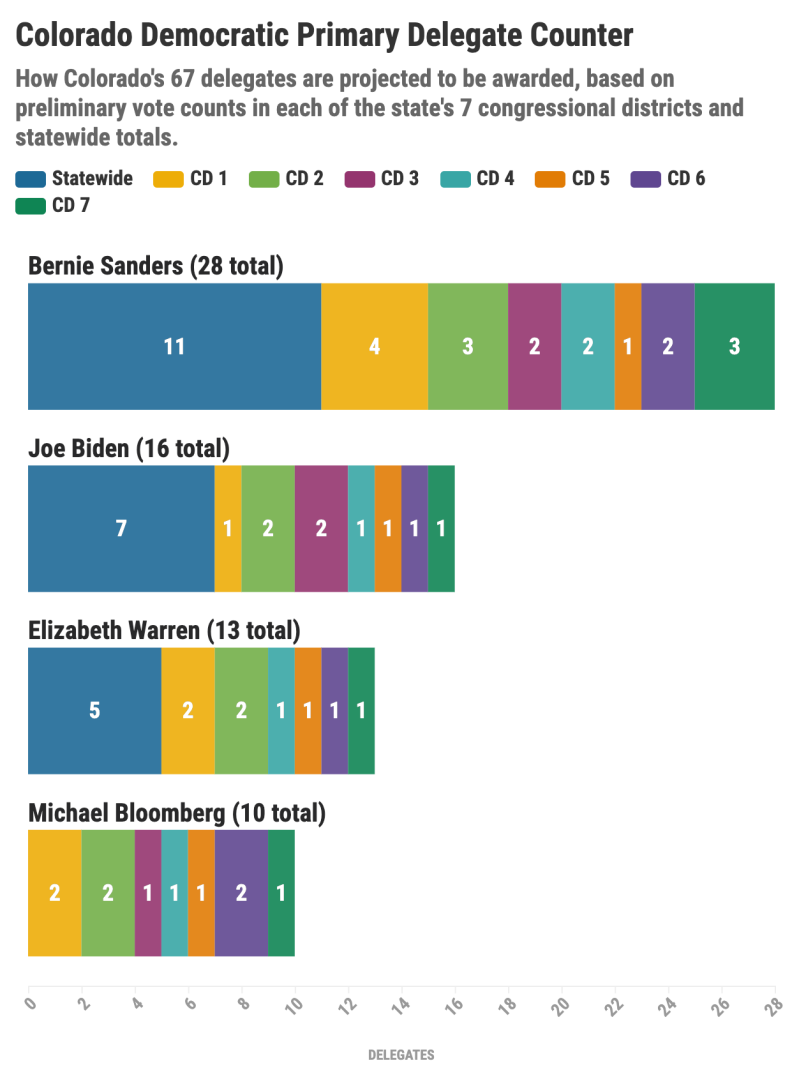 HEY, ONE MORE THING: The data work and coverage above is quite literally something that you can’t get at any other news outlet in Colorado. Thank you for supporting The Colorado Sun and helping us create these kinds of useful tools. Please share them far and wide, because you helped create them!We are only able to take the time and develop the skills to build these kinds of useful tools because we are funded by readers like you. Please consider investing in your community by becoming a member. It starts at just $5/month and every dollar makes an enormous impact.

Here are 5 answers about Colorado and coronavirus. We want to hear what other questions you have.

Coronavirus, while not confirmed in Colorado yet, is already having some major impacts in the state. John Ingold walks you through Colorado’s responses so far, including what powers the governor has, the current state of testing and what happens if the virus makes it into the legislature. >> EXPLAINER

+ WHAT ARE YOU WONDERING ABOUT CORONAVIRUS? We want to hear your questions on how Colorado will handle an outbreak. Send them to johningold@coloradosun.com or tweet them to @johningold, and he’ll hunt down answers for future Sun stories.

++ YES, THE STATE CAN TEST FOR THE VIRUS, BUT IT’S LIMITED: The Associated Press has details about who is getting tested and what symptoms to watch for. >> EXPLAINER

A-Basin split from the Epic Pass this season, primarily driven by the resort’s overcrowded small parking lots. But as Jason Blevins writes, the move may have overcorrected — though it seems like a pretty good excuse to go hit their less-crowded slopes! >> STORY

“None of them are ripe for our review.”

This story got a little overshadowed in yesterday’s Super Tuesday hubbub, so make sure to take a minute to read it. Here’s the intro from Jesse Paul and John Frank: >> STORY

Colorado Gov. Jared Polis could use his broad powers to commute the sentences of the three men on the state’s death row today.

In fact, he could have converted their death sentences to life-in-prison immediately after taking office in January 2019.

But Polis has sidestepped questions about how he will handle their cases, which became more pressing after the Colorado legislature passed a bill last week to repeal the death penalty. In recent comments, the governor has cited the fact that none of the inmates — Nathan Dunlap, Robert Ray and Sir Mario Owens — has submitted a clemency request to him as a way to avoid answering the question of how he’s leaning.

The big number above is how much state money could be freed up to help get poorer school districts on the same playing field as more well-off districts, counteracting Colorado’s large gaps in school funding. But to do so, Colorado would have to require all school districts to raise property taxes to the same level — making wealthier communities essentially pay for themselves and cut them off from state education dollars. Meanwhile, TABOR says taxpayers will still have the final say in all of this. Education reporter Erica Bruenlin has the most comprehensive look yet at the proposed mill levy equalization legislation and the major hurdles it faces. >> EXPLAINER

// BROADBAND MENTAL HEALTH: We’ve written a bit about how hard it is for folks in rural communities to find mental health services. Now the Tri-County Health Network that serves the Telluride region — where there is one psychiatrist for every 20,000 people — has started offering teletherapy sessions with providers elsewhere in Colorado. // Telluride Daily Planet

// PLEASE! 5 HAND SANITIZERS PER CUSTOMER! It’s not as bad as having to show ID to get a box of Sudafed, but Kroger, the parent to King Soopers and City Market stores, is limiting the purchase of sanitizing wipes, hand sanitizer and cold and flu remedies. Still can’t find any Purell? Don’t worry. Washing your hands with soap and water is actually more effective, as long as you’re doing it right. And, if you’re sick of singing the “Happy Birthday” song over and over to get to the required 20 seconds of hand washing, here’s a list of tunes you can sing instead. // Denver Business Journal, CDC, Los Angeles Times

// THREATEN A REPORTER, GET IN TROUBLE: Three men affiliated with local neo-Nazi groups got slapped with restraining orders after they went to 9News investigator Jeremy Jojola’s house and, among other things, posted selfies from outside his home. FWIW, Jojola has made it clear he’ll never stop reporting on hate crimes and white supremacist activity. // Westword, Twitter

// COACHING CONTRACTS ARE COMPLICATED: Colorado State University fired its football coach at the end of the season. The new coach and the rest of the coaching staff will take a haircut to cover the $1.83 million the Rams still owe Mike Bobo. // Coloradoan

// OHV, FOR BETTER OR FOR WORSE: Tiny Silverton allows off-highway vehicles — like four-wheelers and dirt bikes — on its streets. Now Dolores is considering it, too. Silverton says OHVs brought a lot of tourism dollars to town. But this required extra cops to patrol downtown bar traffic. // Durango Herald

// RIP WORLD BEER TOUR: CraftWorks Holdings, parent to beloved Boulder-born Old Chicago Pizza & Taproom — filed for bankruptcy and continued shuttering stores, including the one in Longmont. With $100 million to $500 million in liabilities, the bloodletting might not be done. The Nashville company also owns or operates the Gordon Biersch, Rock Bottom and Chophouse. (Rock Bottom at Orchard Town Center in Westminster also closed in the last few days.) // BizWest 🔑

It’s been a typically exhausting Election Day/Night/Morning After here in The Colorado Sun newsroom, but it’s the kind of exhausting that feels worth it. I hope you found our coverage of the primary (and everything else!) both interesting and useful and that you’ll share it with the people you’ll inevitably hear talking about the primary this morning.

And if you aren’t a part of our community already, now is the time to become a member. Because if you thought the primary was tough to get your head around, just wait for the general election. Get on board now for just $5/month by clicking/tapping here.

Have a great Wednesday and I’ll see you on Friday!