Good morning and happy (sunny) Friday morning from Denver. It’s been a week full of snow, powerful revelations, a presidential visit, witches and more here at The Sun, and we’re happy you’ve been along for the ride. If you missed anything this week, I suggest pouring a tall mug of coffee on Sunday (when the snow returns to the Front Range) and going back through this week’s Sunrisers to take some time to digest.

And as always, I have to remind you that all that journalism doesn’t happen on its own. It takes time, skill and money to produce the stories and tools that help you stay informed. Invest in your community for just $5/month and become a Colorado Sun member right now while you’re thinking about it. Just click or tap (it works on your phone!) here and in less than five minutes, you’ll have done something that will make you feel great and help the whole state become a better, more-informed democracy.

OK, let’s plug in this bag of beer already, shall we? (that’ll make sense in a minute)

ATTENTION LOVELAND AND OUR NOCO NEIGHBORS: Next Thursday, Feb. 27, The Colorado Sun and KUNC are hosting a News and Brews event in Loveland! Come on down to sample Verboten Brewing’s beer and talk journalism. Do me proud, Northern Colorado! More details and RSVP here.

There’s no gray area left: Sen. Cory Gardner — who notably did not vote for Donald Trump in November 2016 after the release of the infamous “Access Hollywood” tapes — decisively tied his reelection bid to the president at a rally in Colorado Springs yesterday, listing accomplishments like the controversial relocation of the Bureau of Land Management to Grand Junction and saying that “these things happen because President Trump and I work together for Colorado.” Jesse Paul has more on the rally, Gardner’s transformation and how it will affect the 2020 race. >> STORY + PHOTOS

+ ADORING COLORADO TRUMP FANS: Sure, between 55-60% of Coloradans actively disapprove of Trump, but the president has remarkably high approval ratings within the GOP. Jesse Paul and Colorado College journalists Isabel Hicks and Sam Seymour talked to a few of the president’s superfans who waited for hours to see yesterday’s rally. >> STORY + PHOTOS

++ HICKENLOOPER VS. THE DEMOCRATIC BASE: John Hickenlooper likely secured his place on the primary ballot for the chance to take on Gardner in November, but the state’s upcoming caucuses will show if Colorado’s Democratic base is warming to the former governor’s campaign. >> ANALYSIS

+++ PRIMARY GUIDE: Super Tuesday is 11 days away. Plenty of time for you to look at our interactive presidential primary voter guide — showing where Democratic candidates stand on Colorado issues — as you fill out your ballot. >> INTERACTIVE GUIDE

Why you might want to do your laundry at 2 a.m. soon… 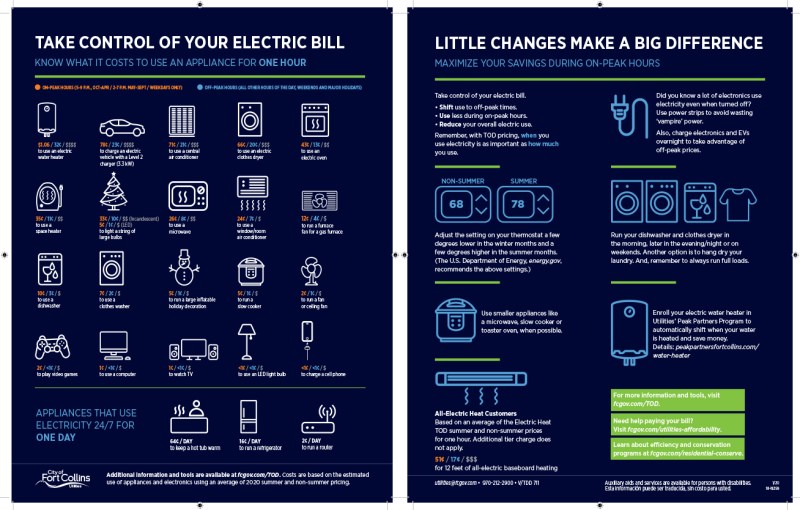 An appliance tip sheet provided by the City of Fort Collins.

“We made lots of little adjustments. We started doing the laundry first thing in the morning or late at night. We changed the timer on the hot tub to miss the 2 p.m. to 6 p.m. peak period, as well as the timer on the evaporative cooler and the thermostats.”

— Lisa Ferreira, a Denver homeowner who was part of Xcel’s pilot program.

Xcel Energy is ready to extend its “time-of-use rates” program to all of its 1.2 million customers, which means that by changing the time of day that you do your most power-hungry activities you can save quite a bit on your bill. But consumer advocates say that people who work at home, the elderly and people on disability will be hit hard by the new rates. Mark Jaffe explains it all. >> STORY + ENERGY CHEAT SHEET

“A lot of these communities have never experienced justice. The health implications are substantial when it comes to air and water quality violations. These communities know what they need better than any person in the legislature.”

+ MORE FINES FOR POLLUTERS, MORE FUNDS FOR IMPACTED COMMUNITIES: A bill working through the Colorado House would triple to quadruple fines for air and water quality violations and, instead of just dumping that money in the general fund, reroute some of it to the communities affected by the pollution. Moe Clark explains the new bill. >> EXPLAINER

++ WILDFIRE PREVENTION IS GOOD INVESTMENT: Fewer fires = better climate. Pretty simple. But when governments and private entities actually invest in projects to reduce the possibility of fires, they create jobs and infuse money into local economies while preventing costly loss of business. >> STORY

— The cost to the state of Colorado from one unvaccinated family who visited the Children’s Hospital emergency room in December.

The story of how one family’s case of measles cost the state hundreds of thousands of dollars was one side of a marathon of testimony about Senate Bill 163,  aimed at transforming Colorado’s near-worst-in-the-nation immunization rates. Jennifer Brown explains what has changed in SB-163 from a similar effort that failed last session. >> BILL EXPLAINER

+ BILL TO CHANGE CHARTER SCHOOL ENROLLMENT RULES SPARKS CONFLICT: A lawmaker worried that charter schools aren’t offering kids with disabilities the same education as public schools will be debuting legislation that would target what she calls discriminatory practices. But charter school advocates say the bill singles out charters and would slow the number opening in Colorado. Erica Breunlin has more. >> STORY

++ OP-ED ON CENSUS COUNTING: Diana McFail, CEO of NextFifty Initiative, writes: “Why we need to reach hard-to-count Coloradans: There’s a lot at stake.”

I’m not a beer-drinker, but this story from John Frank is kind of blowing my mind. After, oh, 4,000 years or so of humanity brewing beer (shoutout Ninkasi, the Mesopotamian goddess of brewing), a Colorado company has developed a way to remove the alcohol from concentrated beer, then recombine it at the ABV of your choosing (kind of like a soda fountain that can get you drunk). Seriously, go check this story out and then head up I-70 to try John’s pick below. >> STORY

+ JOHN FRANK’S BEER PICK: Stop at Tommyknocker Brewery in Idaho Springs on your next trip to or from the mountains to taste these new “alcohol by choice beers” and see what you think. But don’t miss the traditionally brewed Blood Orange Haze, a hazy version of the brewery’s classic IPA that features real orange zest and a bright pop of flavor.

“Visual Autobiography,” a work created by Robert Rauschenberg in 1968, is part of the “Reflections and Ruminations” exhibition hanging at the Museum of Outdoor Arts in Englewood Feb. 24 through June 13. (Handout)

“This is less about intellectualizing, more about pop culture.”

If you’re looking for a little visual stimulation — especially after yet another snow storm hits this weekend — you might want to cast your peepers a little south of Denver to Englewood’s Museum of Outdoor Arts. Joanne Ostrow previews the major exhibition of the work of multi-disciplinarian Robert Rauschenberg, which will put a smile on your face with a combination of high and low culture. >> PREVIEW + PHOTOS 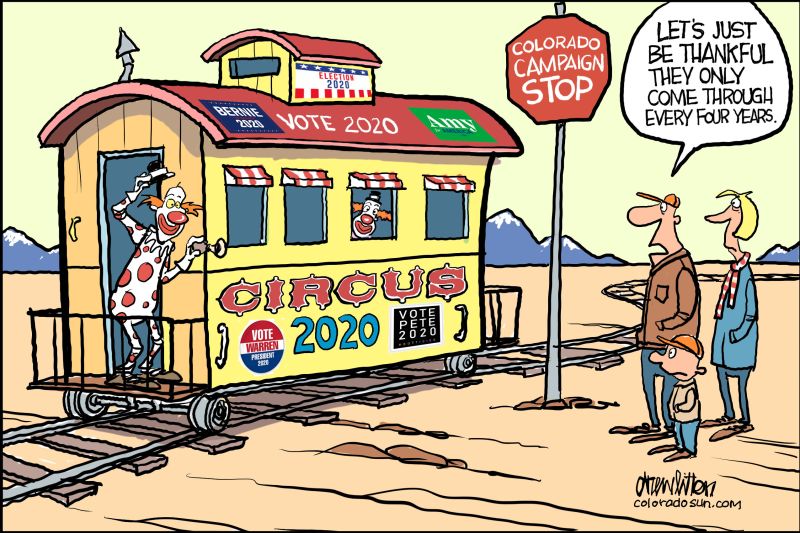 // Meanwhile, it’s only February and Drew Litton knows all too well that we’re deep into silly season — and we’re barely into primary season.

// After we published Jesse Paul’s excellent and heartbreaking story about a Denver victim of child sexual abuse by a Catholic priest years ago, this week’s “What’d I Miss?” has extra resonance as Ossie and Myra discuss the point where politics and trauma intersect.

Although author Courtney Miller’s relatives sought to become official members of the Cherokee tribe in the late 19th century but were denied official citizenship, that didn’t deter his respect and fascination with Native American culture that he counts as part of his heritage. This week’s excerpt, from his novel “Gihli, The Chief Named Dog,” explores the aftermath of a Cherokee girl’s brutal kidnapping and the community’s recovery. And in the SunLit interview, Miller explains how he took up writing fiction late in life and created his own genre: “geezer lit.”

THIS MONDAY! BOOK CLUB! Come warm up with a cup of coffee or glass of wine at BookBar in Denver this Monday, Feb. 24, and chat with author Diana Diana Holguín-Balogh about her Billy The Kid romance “Rosary Without Beads.” RSVP here as space is very limited.

// COLORADO RIVER LOST 1 BILLION TONS OF WATER: A major new study confirms what has long been suspected: climate change has drastically reduced the amount of water in the West’s most important river. >> The Washington Post

// EL TACO DE MEXICO GETS A JAMES BEARD AWARD: The world of food awards can be pretty self-centered and snobby, but my heart (and taste buds) soared at the news that the landmark El Taco de Mexico in Denver is getting a special James Beard Award. >> 303 Magazine

// FEDS TAKE AWAY DENVER’S NEW CITIZEN CELEBRATIONS: It used to be a regular rite of passage in Denver: smiling folks of all ages and backgrounds waving little American flags as they took the oath to become citizens. But those celebrations have stopped because the feds have stopped sharing information with the city as direct retaliation for the city’s refusal to give ICE information about undocumented residents in the city. >> Denverite

// MEDICARE-FOR-ALL STUDY: It’s the talk of the primaries, but a new analysis gives some real projected numbers behind the kind of free-at-the-point-of-use nationalized health care system promoted by Bernie Sanders, including saving 68,000 lives and $450 billion per year. >> The Washington Post

// THE “MARITAL ISSUES” DEFENSE IN AIRBNB CASES: As more couples are targeted by the City of Denver for illegally listing non-primary residences on Airbnb, some are saying that their “tender marital issues” are why they had more than one property — and it might be working. >> Westword

// “BARKING GHOST” AT PUEBLO MCDONALD’S: Overnight employees at the burger chain said they were so freaked out by the sounds of someone “speaking in a strange language” and “barking” that they did not go back in until the sun was up. >> Pueblo Chieftain

OK folks, that’s it for this week. I hope we see you either at our News & Brews event in Loveland or at next week’s Book Club in Denver! And as always, we’re looking for venues to visit all around the state, so if you want to help bring a Sun event to your neck of the woods, send me an email!

Have a great weekend!