Good morning! A good chunk of the state is digging out from back-to-back snow storms that closed I-70, sent people running to hit all that powder at Vail (look at these lines!) and helped our own reporter Jesse Paul witness the creation of a classic GIF:

Skier Will Durrett at Arapahoe Basin on Saturday. (Video by Nick Brown, Special to The Colorado Sun)

No skiing buddies were (seriously) harmed in the filming of that video, I’ve been assured.

But before you get back into the mix of your work week, we have some powerful journalism to share with you, from a heart-wrenching story about two young parents to a practical guide to how Colorado will vote before Super Tuesday.

Let’s not get over our skis, shall we?

Their baby was taken away and placed in foster care for 164 days. It turns out, he had a bone disorder.

Crystal and Jarvis Bryant talk on Jan. 24, 2020, about when their son was taken away from them and placed in foster care. (Mark Reis, Special to The Colorado Sun)

“It’s no hard feelings for us, but it’s anger. This is what we actually had to live through. This is what our son had to live through. There should be due diligence before someone’s child is removed from their care. That is like, absurd, that you can take someone’s child and get a judge to sign off on it and you didn’t even do your due diligence.”

This story from Jennifer Brown is the stuff of every parent’s nightmares. Crystal and Jarvis Bryant, just adjusting to a new life in Colorado with a chronically sick baby, had their son taken from them and their professional lives upended because of charges stemming from what was at the time baby Jace’s undiagnosed bone disorder. But even though the couple has been fully cleared and Jace is back at home, their ordeal is far from over. >> STORY + PHOTOS

Colorado’s 2020 presidential primary ballots are hitting the mail today. Here’s what you need to know.

Super Tuesday is March 3, but because of Colorado’s mail-in elections, that means that ballots are hitting postal trucks today. Jesse Paul explains how the primary will work, including what to do if you’re an unaffiliated voter, what to do if your preferred candidate drops out before March 3, and much more. >> EXPLAINER

+ BENNET’S LAST STAND? The New Hampshire primary is tomorrow, and Sen. Michael Bennet needs to finish in third or fourth to keep advancing. But the polls aren’t looking good. >> STORY

A Fort Collins chocolate maker has the world’s largest selection of single-origin bars, but that’s not its purpose 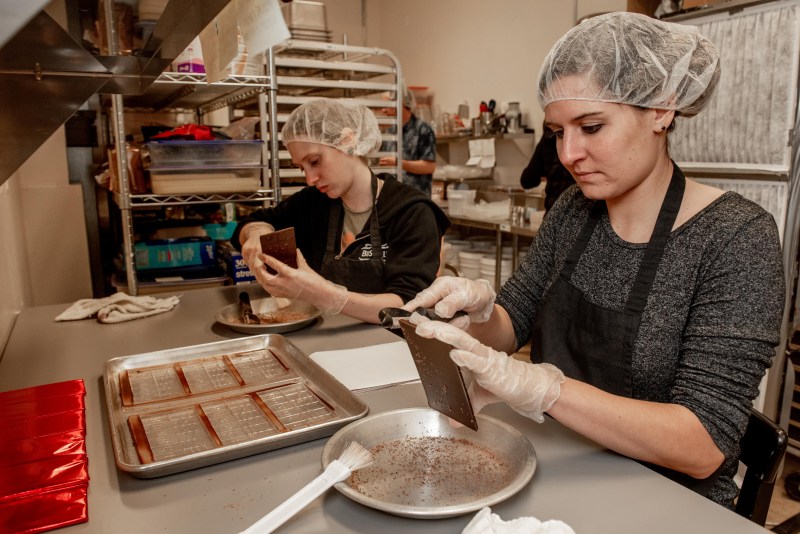 Kristen Amicarelle, right, and Kathleen George trim and package chocolate bars at Nuance Chocolate on Wednesday, February 5, 2020. George said she can package about 100 bars per day. (Valerie Mosley, Special to the Colorado Sun)

If you’ve got chocolate on your Valentine’s Day docket, you need to read this story from Tamara Chuang. Not only is it a great profile of a cool small business, but Tamara takes you into the globe-spanning chocolate industry — and the pressures of climate change, workers’ rights and trade deals currently roiling manufacturers large and small.  >> STORY + PHOTOS (NO AROMAS, SORRY)

A Colorado lawmaker brought a short-term rental bill he never intended to pass. It created an uproar.

“I call this the ‘now that I have your attention’ bill.”

State Sen. Bob Gardner wanted to start a conversation. He’s incited a statewide uproar instead. Jason Blevins and Jesse Paul have the story of a bill that would change how short-term rentals are classified for property-tax purposes — and that inspired a wave of lobbyists to descend on the state Capitol and has affordable housing advocates asking, “Well, why don’t we do something like this?” >> STORY 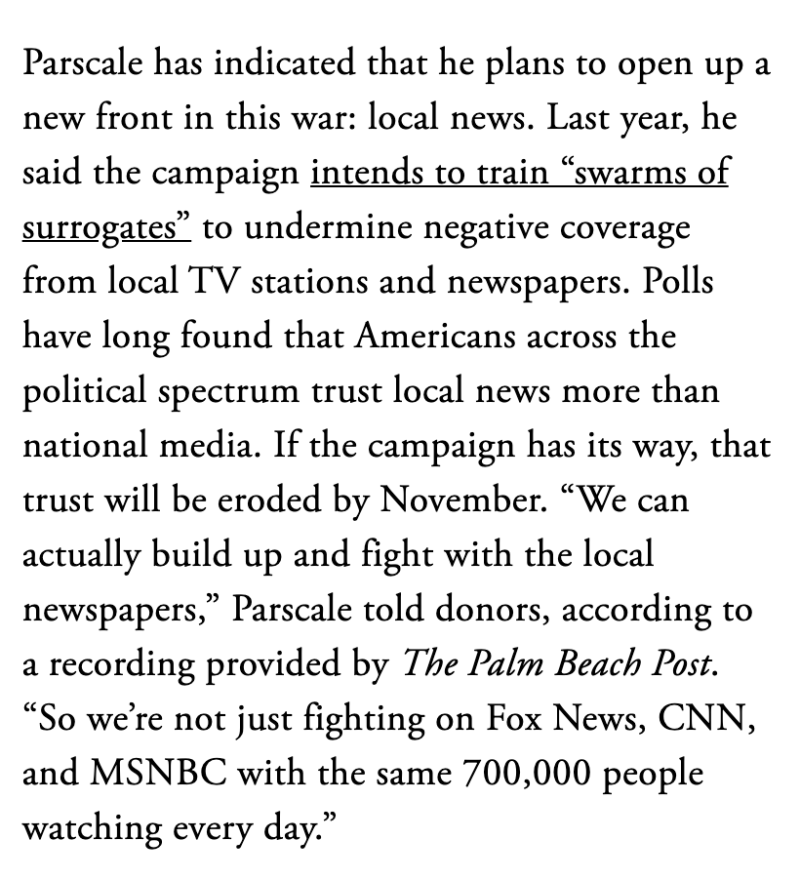 // THE DISINFORMATION FIGHT IS COMING FOR LOCAL NEWS: Back a few days before the election in 2016, I wrote a story for The Denver Post debunking a story about a Hillary Clinton murder conspiracy — one of the first volleys in what has become a full-scale war over disinformation and shared reality. That story was passed around by people who initially bought into the fake story, partially because a trusted local news outlet did the work to debunk it. But fast forward to 2020, and what started as a way for foreign teenagers to make money off of American political anger has become a plank of the president’s reelection campaign —with local news sources in the crosshairs of a sophisticated disinformation machine.

By reading this newsletter, you’re already demonstrating one of the best ways to fight against disinformation: Seeking out trustworthy news and the outlets that produce it to include in your information diet. If you want to extend your impact — besides becoming a member of The Sun — here’s one solid way: encourage the people you love to start a habit of reading good, local news now so they’ll be ready to withstand the onslaught this summer and fall. Hot tip: signing up for a newsletter like this one at coloradosun.com/newsletters is a great way to start. // The Denver Post 🔑, The Atlantic

// PROTECTING THE WHISTLEBLOWER: That term — whistleblower — has been repeated often in a political context over the past few months, often in ways that illustrate the importance of protecting them. Here’s how those protections work: A worker for Burlington Northern Santa Fe Railway Company won $1.5 million in judgments from a federal court in Denver because the company was found to have retaliated for the worker reporting track defects. // Greeley Tribune

// DIAMONDS IN THE (VERY) ROUGH: A Basalt couple was among hundreds of investors taken in by what federal authorities call a $30 million Ponzi scheme involving “fancy colored diamonds” — to the tune of $500,000. A judge in Pitkin County has signed an arrest warrant for the Florida man behind the alleged scam. // The Post Independent

// LET’S END THIS SECTION WITH A BANG: About a mile above Howelsen Hill in Steamboat Springs, a 2,797-pound firework exploded, setting a world record. And while the explosion looks really cool on video, I was way more interested in the machine that helped make sure the shell was a perfectly spherical shape that you catch a glimpse of at the tail end of this clip. // 9News 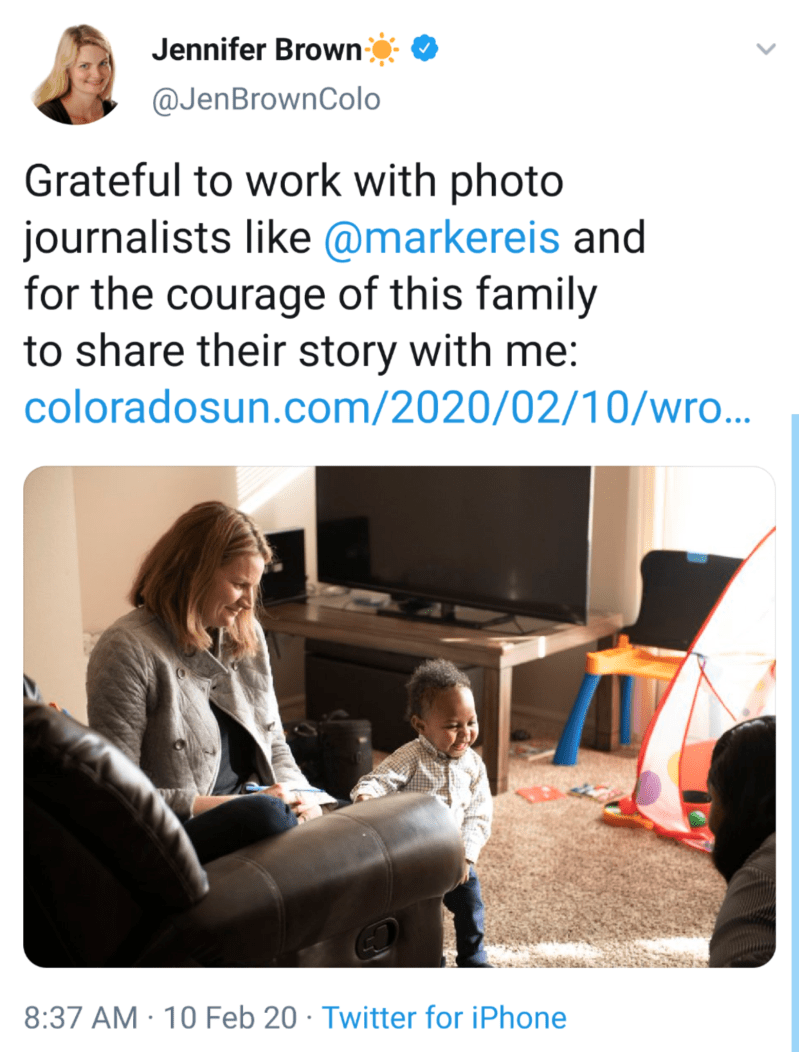 Thanks for reading to the end of this Sunriser! I shared the tweet above from Jen Brown because it really represents what makes local news so different from “the media” bogeyman targeted by people who wish to sell you disinformation.

Jen is a professional, experienced journalist and a mom and a commuter and an occasional beer drinker who lives and works in the same streets as the people she covers. That photo is a reminder that just on the other side of the words you read when you look at a Colorado Sun story (or most other local news) are your neighbors who are trying to make sure you are informed about your neighborhood, city and state.

It’s going to be a long, trying year, where some very powerful people are going to try to muddy the waters of truth, and I’m grateful you’re making the effort to keep your eyes on the facts.

And if you haven’t yet, now is a great time to become a member of The Sun. We’re committed to nonpartisan, fact-based news — without traditional advertising or speculative investment — so support from readers like you is the only way we keep the lights on. For just $5/month, you can make a difference → coloradosun.com/join

OK, I’ve taken enough of your Monday, have a great day and I’ll see you back here on Wednesday.