Good morning! It’s visible-breath weather here in Denver — where an icy storm led to 169 crashes in the city — and we have a Sunriser full of news that stretches from Colorado medical labs to small towns on the Eastern Plains all the way to the fractured Iowa caucuses.

Speaking of caucuses and primaries, Colorado’s presidential primary ballots will be sent out starting on Monday. Did you know that 17 year olds who will turn 18 by Election Day in November can participate in the primary?

Let’s debug this app already, shall we?

Hello, NoCo! The Sun is heading to Loveland for our first News & Brews event of the year at the Verboten Brewing and Barrel Project on Feb. 27 at 6:30 p.m. RSVP for the free event here and make sure to check out our events calendar on Facebook for more!

Speciality drugs are saving lives in Colorado and beyond. But who should pay for them? 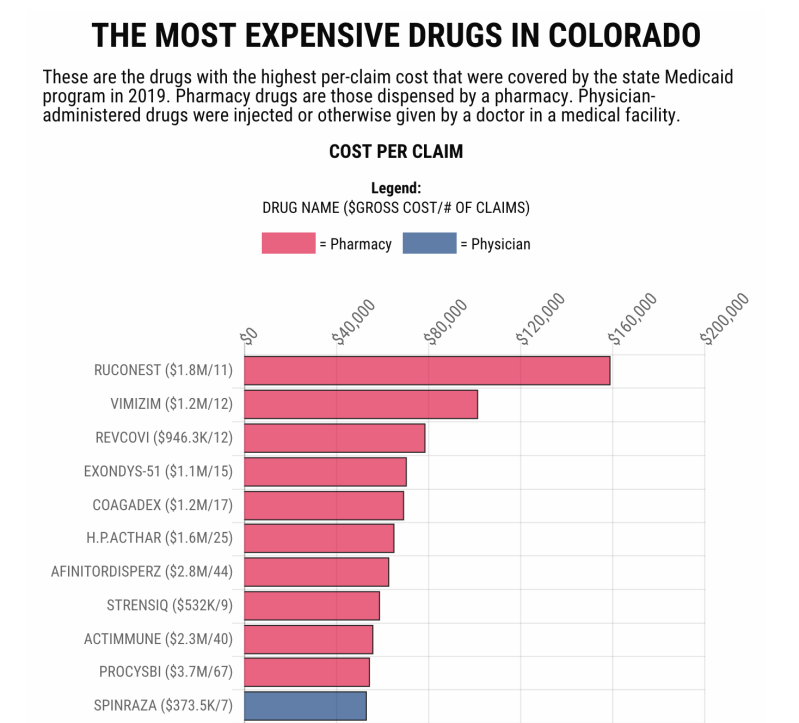 In some ways, it feels straight out of a utopian future: Researchers are using gene sequencing to create drugs that can save the lives of just a few — or even a single patient, as we reported last year. But like the rest of our health care system, the dystopian cracks start showing once you ask: Who is paying for all of this? Jennifer Brown looked at some of the most expensive drugs covered by Medicaid in Colorado, including one that costs nearly $160,000 per claim — and why despite the upfront cost, they will save pain, suffering (and money) in the long term. >> STORY + CHARTS

+ FAUX-INSURANCE “HEALTH CARE SHARING MINISTRY” CRACKDOWN: I’m just going to drop the lede from John Ingold’s story about lawmakers wanting to crack down on what they say are dangerous not-actually-insurance-groups here: >> STORY + ANALYSIS

Recently, a Colorado woman was badly beaten in an act of domestic violence, her medical bills totaling in the tens of thousands of dollars. But when she asked her health coverage provider to help with the costs, she said the company denied her claim on the grounds that she had engaged in immoral behavior.

She had been drinking before being attacked.

Friday was the deadline to file a claim for reparations for people who were abused by Catholic priests in Colorado, and Jesse Paul reports that of the 78 claims, more than $1 million has already been paid out to settle nine of them. >> STORY + NUMBERS

Colorado vowed to end the waitlist for an adult disability program by 2020. Nearly 3,000 people still are waiting. 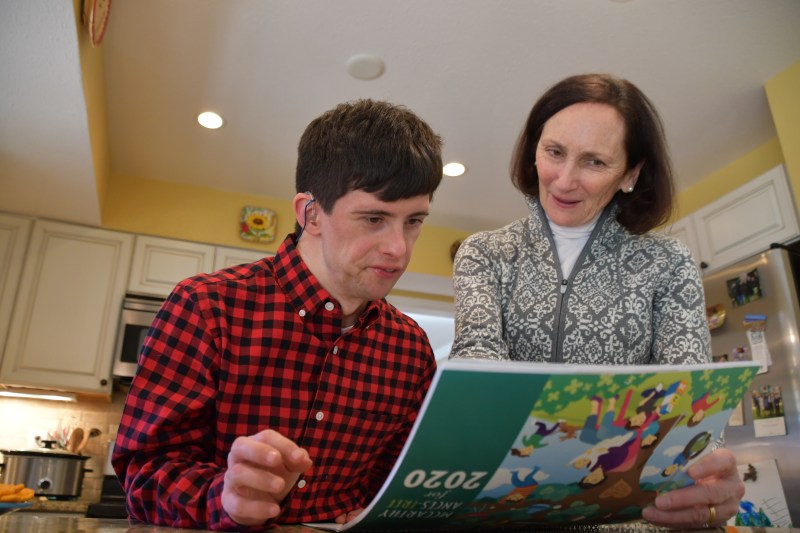 Brennan Froehlke and his mom Margaret Froehlke look at a family calendar while they wait for the Super Bowl to begin on Feb. 2, 2020. Brennan, who has Down syndrome and autism, has been on the waitlist for the DD Medicaid waiver for 12 years. (Moe Clark, The Colorado Sun)

“We have worked hard to make a plan for Brennan, but we can’t act on it until we get the waiver. We can’t set a timeframe or goal. We have no answers, and we don’t know if we are planning for a pipe dream. It’s very frustrating.

“But I believe that the state is going to come through because it’s the right thing to do.”

Six years ago, lawmakers set 2020 as the year Colorado would clear the waitlist for Medicaid waiver programs that help adults and children with developmental and intellectual disabilities. Well, it’s 2020 and there are more than 4,000 people waiting — nearly 3,000 for the most intensive program that helps adults move out of their parents’ homes. But, as Moe Clark and Jennifer Brown report, the increased waitlist isn’t totally bad news. >> STORY + ANALYSIS

One by one, the leaders of Colorado’s colleges and universities appeared before lawmakers to make a collective plea: Don’t neglect us — again. John Frank has the details of Gov. Jared Polis’ proposed state budget and why institutions are calling it a “starvation diet” for higher ed. >> STORY

DID YOU KNOW that the state of Idaho’s correction department voted to put some of its inmates in a private prison in Burlington on Colorado’s Eastern Plains? That agreement is one of the key pieces of what is expected to be a major fight over Democrats’ push to end Colorado’s use of private prisons in the state. John Frank has more details on the budget bill and what it means for the towns where incarceration is a primary industry. >> BILL EXPLAINER

The next Colorado Sun Book Club meet-up is just around the corner! Come on over to BookBar on Tennyson Street in Denver on Monday, Feb. 24 to meet up with author Diana Holguin-Balogh and Colorado Sun staff members to talk about her award-winning “Rosary Without Beads.” RSVP here!

// HOCKEY, OUTDOORS, AT 10,000 FEET: Someone, somewhere, is writing a screenplay about Victor, the once-famous gold camp west of Colorado Springs, where the Victor Penguins  have been taking the ice on a home-built outdoor ice rink for the last 30 years. // The Gazette via OutThere Colorado

// “MIDDLE-CLASS DOOMSDAY TIMESHARES” IS A HECKUVA PHRASE: Everybody wants a nice little mountain home, but what if you’re less interested in hiking and skiing and more interested in having a “defensible” bunker to ride out the end of the world? Enter “Fortitude Ranch” where even middle-class folks can get space in a bunker of their own. // CPR News

// THE SUBURBS ARE (KIND OF) A LAUGHING MATTER: Stand-up comedy is hard. Every time I’ve convinced myself I have a tight 5 minutes and I’m ready to hit an open mic, my throat reflexively dries up and my stomach drops in my body’s instinctive attempt to protect me from humiliation. So my hat is off to the folks featured in Elliott Wenzler’s profile who are scratching out a living (or part of a living) by slinging jokes in the breweries, restaurants and spaces blossoming in Denver’s suburban corridor. // Colorado Community Media

// FIGHTING HOMELESSNESS WITH SUPER-TINY HOMES + MOBILE LAUNDRY: A church in Pueblo is working with an engineer to create a batch of “SadieShelters” — think “tiny home” but even smaller, around 50 square feet — in Pueblo for people experiencing homelessness to live in for up to two years. Meanwhile, up north, Fort Collins now has its own mobile laundry truck for people without homes or access to laundry facilities. // Pueblo Chieftain, The Coloradoan 🔑

// INSURANCE POOL IN SW COLORADO: After the success of the Peak Health Alliance insurance pool — which banded together and negotiated better prices at a hospital in Summit County — small business owners and families near Four Corners are pushing to create their own. // The Colorado Sun, The Durango Herald

// INSURANCE WON’T COVER ERIE’S $1M GAFFE: Remember when the town of Erie wired $1 million to a scammer’s bank account? Insurance isn’t going to cover it, but officials say they are still hopeful they will recoup their losses. // 9News

// QUARRY OWNERS SAY GLENWOOD SUIT IS “PUBLICITY STUNT”: The mining company that wants to expand the limestone quarry up the hill from downtown Glenwood Springs is already on the ropes financially, and they claim that Glenwood’s attempt to “intervene” in a permit lawsuit filed by Garfield County against the quarry is “a publicity stunt.” // The Colorado Sun, The Post-Independent

// NO MORE POST AT THE POST BUILDING: The building at 101 W. Colfax that still has the name of The Denver Post on it will officially have no employees of the paper or its parent company now that the city of Denver approved a lease to take over the top floor for $1 million per year. Meanwhile, the actual hard-working journalists of The Denver Post are dealing with some of the most polluted air and water in the state in their windowless newsroom in unincorporated Adams County. // Denverite, Elizabeth Hernandez on Twitter

I only mentioned the working conditions of The Denver Post folks above to remind you that journalists are people, living in your neighborhoods, doing a job they believe in despite a lot of hurdles. While it can be frustrating to see journalism continue to be cut around Colorado and the country, reserve those frustrations for the business owners doing the cutting, because the on-the-ground journalists are the ones dealing with those decisions on the front lines.

You’re already doing something to help reverse that trend by supporting The Colorado Sun — and by extension, a totally new way of thinking about how local news is funded and how it serves our community. You can help us even more by sharing The Sun with the people in your life who should be reading our kind of news — and any business owners you know who might be interested in underwriting newsletters like The Sunriser (contact carol@coloradosun.com for more information about that).

If you want to do something tangible and immediate to fight the loss of local journalism, you can become a member of The Colorado Sun right now starting at just $5 a month. Click or tap (works great on phones!) here to support The Sun — and by extension, a totally new way of thinking about how local news is funded and how it serves our community. The journalists of The Sun — including yours truly — own the business top to bottom, and we make sure every single dollar is put right back into journalism as efficiently as possible. Period.

OK, you have the rest of your week to get back to, so thanks as always for reading! Stay warm and we’ll see you here on Friday!