Climate change and the future of snow / Maserativille, Colorado / The tricky path to pay teachers / Student journalism shield / Much more

Good morning! As you can imagine, I do a lot of reading about the world of newsletters, and this morning I came across a quote that really articulated why I — and hopefully you, too — value email as a way to get news: “One reason why newsletters are having a resurgence is because people are tired of endless feeds. There’s something really calming and comforting about a media product that has a finite ending … that has a lot of utility,” (emphasis mine) said Casey Newton, who writes “The Interface,” an excellent newsletter about technology and democracy.

It really hammers home what I hope all our Colorado Sun newsletters can be: A thoughtful, useful, finite alternative to relying on social media to stay informed. You have a life to get back to! So if you think we’re achieving that, I’d love it if you would forward this email on to people in your life who could use that social media alternative (or just share coloradosun.com/newsletters wherever you can).

And if you do find The Sunriser — or more importantly, the journalism we share here — valuable in your life, it’s time to step up and support it. The Sun is reader-first and paywall-free, which means that your support is literally the only way we can keep doing what we’re doing.

Memberships start at just $5/month (and you can sign up from your phone in just a few taps!) and it is one of the most impactful ways to give back to your state. Come join the party!

OK, enough navel-gazing, let’s pump this tire already, shall we?

From backcountry skiing to hot tub hangouts and whiskey sipping, there are plenty of excuses to visit Estes Park this winter. Need one? Check out 9 here.

As climate change warms the West, researchers try to predict the future of snow 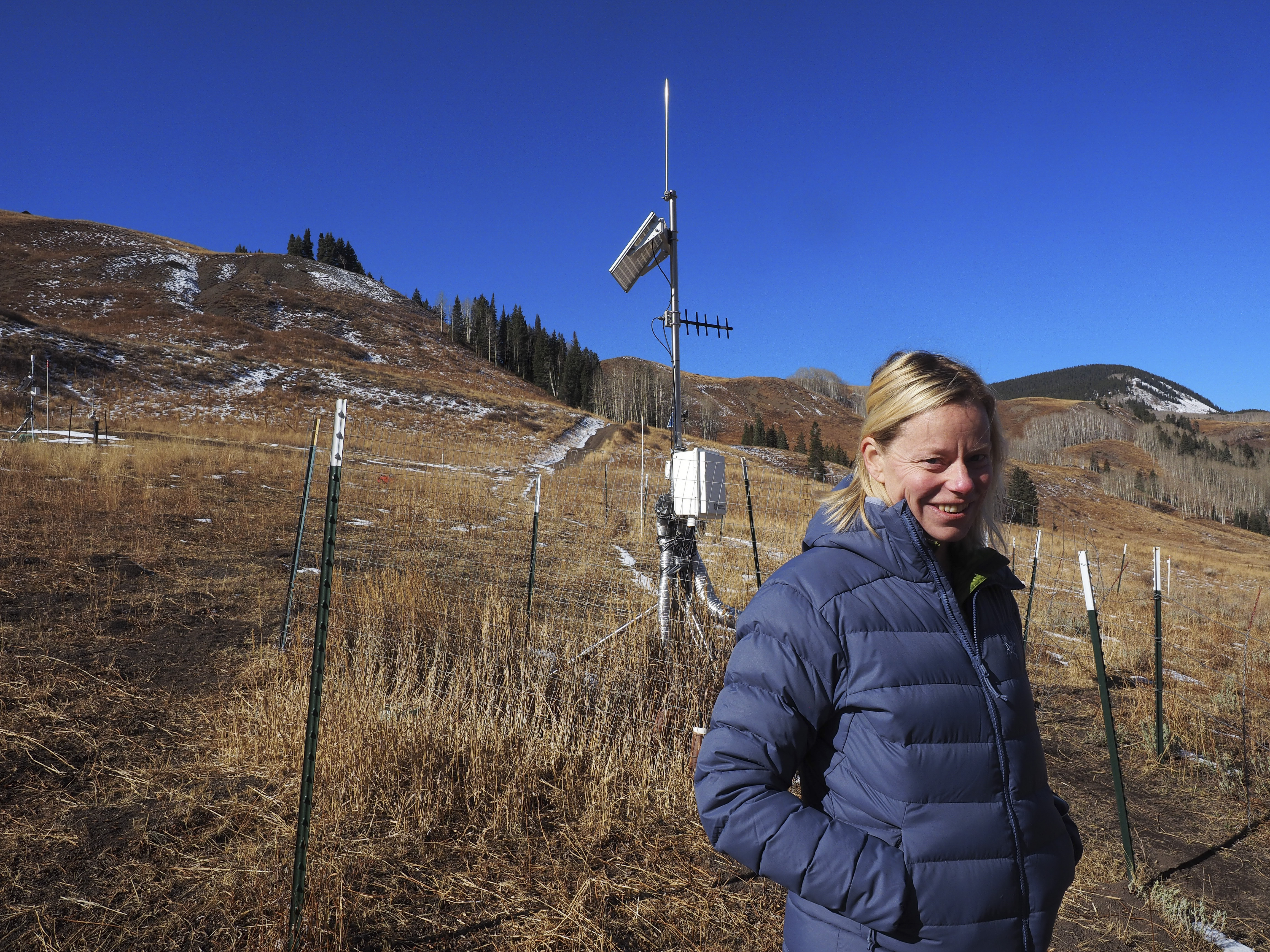 Heidi Steltzer stands outside a research plot near Crested Butte where she and her team of scientists and student assistants are studying the effect of snow cover and snow melt on plant species. The instrument behind her records air and surface as well as underground temperatures. (Dean Krakel, Special to The Colorado Sun)

“Every year, it’s a roll of the dice, but it isn’t a six-side die anymore. It’s more like a 20-sided Dungeons & Dragon die. But we can’t wait for 20 years of data to find out what the future holds.”

Dust. Heat. The Pacific Ocean. Shrubs. Jet streams. A tiny pink mountain wildflower with the poetic name prairie smoke. Every single one of those things plays a part in how the changing global climate is affecting the snow cycles that maintain the razor-thin balance of water in the West. Mark Jaffe has a three-part series looking at the researchers who are working in the Colorado high country to find out how much change has already happened and predict what will happen in the years to come.

Want to learn how to drive a Maserati or Aston Martin in a blizzard? Head to a Colorado mountain town with many other very rich folks. 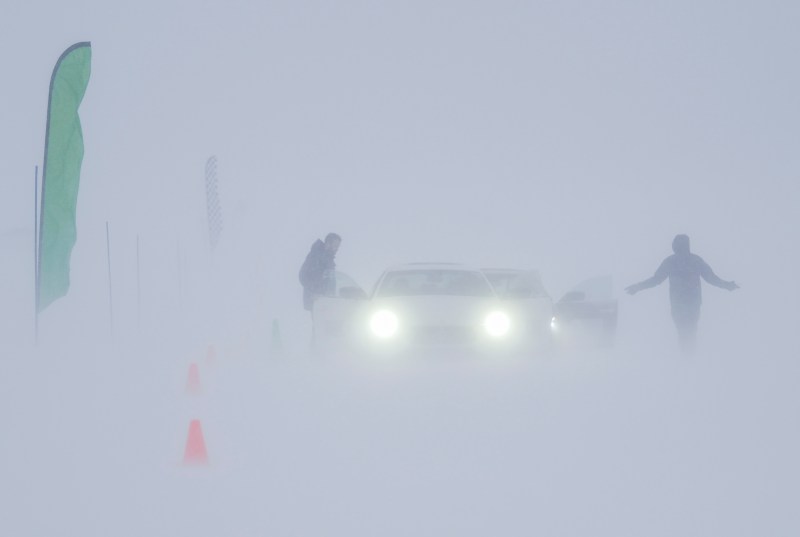 Blizzard conditions swirl around a line of Maserati sports cars at the start of a high-performance run around a snow-and-ice track during the second day of the Maserati Winter Performance Driving Experience held near Crested Butte. (Dean Krakel, Special to The Colorado Sun)

A basic Maserati starts at about double what many Crested Butte service workers make in a year.

Switching from climate change’s effect on snow to ultra-fancy offroad European cars is a hairpin turn worthy of a high country switchback, I know. But Nancy Lofholm (with photos and video from Dean Krakel) brings us a story of how a small agricultural and tourism town like Crested Butte — struggling with finding and housing workers in all seasons — becomes a playground for the owners of some of the most expensive cars in the world. >> STORY + PHOTOS + VIDEO

“Polling shows that health care professionals, i.e. the people who actually treat patients, are viewed more favorably than other players in the health care debate. Policymakers and the public want to hear what you have to say, and your views will have a major impact.”

— From a slide in PATH’s “ambassador training program” presentation to recruit doctors to oppose the public option.

“It’s incredibly sad, and frankly pretty disgusting, that they are trying to use the caregivers in our society. I guess they’ve stooped to a new low in opposition.”

A few months ago we predicted that Colorado’s proposed public option health insurance plan would be the “mother of all health care battles” this year at the Capitol, and even though the bill hasn’t yet been introduced, groups tied to hospitals and insurance companies have dropped $150,000 on TV ads. And now, as Jesse Paul reports, a new organization backed by hospitals, business leaders and Republican politicians is being accused of trying to “weaponize” doctors to speak out against it. >> STORY 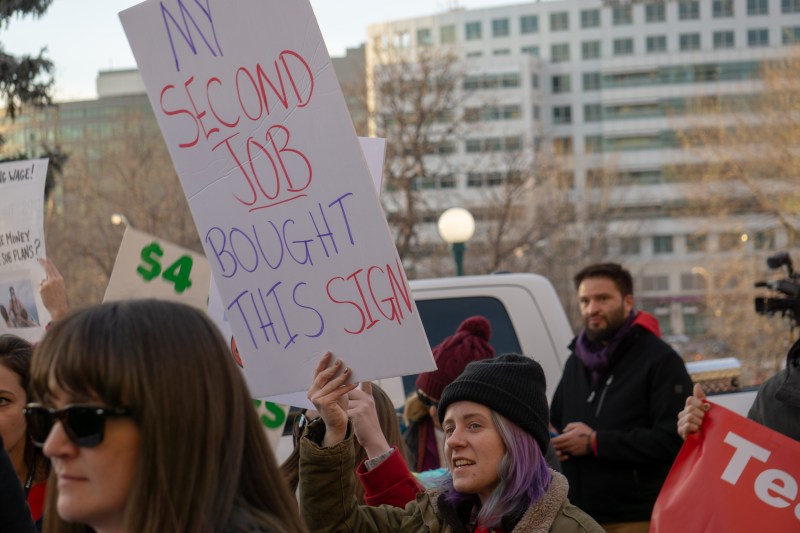 Abbey Ashby, a teacher at McGlone Academy in Denver, holds a sign at a rally in support of Denver Public Schools teachers on the steps of the Capitol Building on Jan. 30, 2019. (Eric Lubbers, The Colorado Sun)

High-profile strikes have brought attention to Colorado’s teacher pay problem, which is worsening as costs of living have skyrocketed. Erica Breunlin writes about the efforts from both sides of the aisle — from the Dem-proposed state fund for raises to the GOP plan to give bonuses to some high-performing teachers — and why the path for state money to end up in teacher’s paychecks is so tricky in Colorado. >> STORY + ANALYSIS

“The advisers are employees and they are members of the school faculty almost always, but they’re also advocates for students and they are their journalism coaches. So they’re sort of caught in between.”

Student journalists are journalists, except for the fact that often, the students and their advisers are at a more direct risk of retaliation if they publish unflattering or damaging material about school administration. Moe Clark reports on a bill introduced at the state legislature to bring the student journalism shield law “into the 21st century.”  >> STORY

+ NONPROFIT FUNDS LAWYERS TO DEFEND MEDIA IN COLORADO: A committee with a very long name (The Local Legal Initiative of the Reporters Committee for Freedom of the Press, to be exact) will fund attorneys in five states, including Colorado, to defend news organizations in fights to enforce public records and open meetings laws. >> STORY

// ALAN TURING’S STOLEN KNIGHTHOOD MEDAL SEIZED BY FEDS IN COLORADO: This is a wild story that somehow stretches from Enigma-machine cracking WWII genius Alan Turing’s boarding school in England to the doorstep of the University of Colorado in Boulder. // BizWest

// BEHIND THE SCENES OF A TRUMP (RE)TWEET: The president went on a retweeting binge yesterday and in the process shared a tweet from the National Republican Senate Committee (helmed by Sen. Cory Gardner until November 2018) that included a link to The Sun’s story on the continued investigation into spending by then-Gov. John Hickenlooper. FWIW, the tweet to the president’s 71 million followers resulted in about 424 pageviews on the article itself, highlighting the gap between people reading a headline on Twitter and them reading the actual article (something of which people of all political stripes are guilty). // @realDonaldTrump, @NRSC, Roll Call, The Colorado Sun

// HOMELESS MAN GETS APARTMENT AFTER THEFT + DURANGO CONSIDERS NEW PLAN: A man whose camping equipment was stolen just before a major Thanksgiving snowstorm — by people he called “self-appointed park police” in Cherry Creek State Park — moved into an apartment with help from the House Aurora partnership. Meanwhile on the Western Slope, officials are worried about a new managed camp for people experiencing homelessness near Durango becoming an “afterthought.” // Sentinel Colorado, The Durango Herald

// TAX VACANT SECOND HOMES FOR AFFORDABLE HOUSING? There are two things happening in Colorado’s resort towns: Many luxury homes sit empty most of the year and the towns struggle with enough affordable housing for the workers serving the towns and resorts. So one Avon town councilor is looking for a way to use a tax on those second homes to a) fund affordable housing b) encourage owners to rent to locals. // CPR News

// WORKING TO LOWER UNEMPLOYMENT RATE FOR PEOPLE WITH AUTISM: A Denver-based company is hoping to act like a “trade school for people on the autism spectrum” to focus on what people can do, not just what they can’t. // Denver Business Journal

// ADD SOME SPINACH TO YOUR PROTEIN BAR: Earlier this month, Jen Brown took a deep dive into Colorado’s updated cottage foods law and how it’s empowering a new group of small-scale food producers. And today, BusinessDen has a story about Laura Harris, a Denver woman who has been riding the ups and downs of that movement with a spinach-packed protein bar made by her company Greens Gone Wild (think an RX or Luna bar, but with more greens). (Full disclosure, Laura is my next-door neighbor and our dogs are very good friends. I can say, though, from experience, that the bars are really tasty). // The Colorado Sun, BusinessDen

// A VERY GOOD RESTAURANT REVIEW: Going out for a meal at a restaurant has turned into an expensive ordeal, and for every good, cheap neighborhood restaurant that closes, up pops one with the aesthetics of a neighborhood restaurant but the prices of a fancy brasserie. Allyson Reedy’s review of American Elm is a great exploration into the missing balance between the hard work of taking care of restaurant workers (a worthy cause) and actually giving a neighborhood something it needs. // The Know

We hope to see you at tomorrow’s event with Evan Smith at the University of Denver. It’s so important to not just support local journalism, but also understand what’s happening behind the scenes and to truly understand why everyone benefits from having more of it around.

On that note, we’re always looking for readers like you to encourage your friends and family to become Colorado Sun members (or at least sign up for the free newsletters to get a taste). Tell them how great it feels to be a part of a growing community of dedicated and engaged citizens! Tell them it makes you more interesting at parties! Tell them it makes you a better voter! It’s not bragging if it’s true 🙂

OK, we’ve reached the promised “finite ending” of the newsletter. Go back to your real life and we’ll see you on Friday.