BREAKING: Rep. Jason Crow, D-Aurora, has been selected as one of the House managers as the impeachment trial of President Trump moves forward in the Senate. More here.

Rep. Yadira Caraveo, D-Thornton delivers her idea at The Colorado Sun’s Big Ideas 2020 Forum at the Cable Center on the University of Denver campus on Jan. 14, 2020. (Eric Lubbers, The Colorado Sun)

Good morning! Thanks to the hundreds of people who came out on a busy night for our Big Ideas 2020 Forum. Seeing that many engaged Coloradans in one place, face-to-face with some of the most powerful lawmakers in the state felt like democracy in action (we’ve got summaries of the action below).

We’re already working on our next events — including the return of The Colorado Sun book club — so watch this space!

One of the (many) memorable quotes from last night came from Gov. Jared Polis, who referenced the “probably 30 or 40 people” at The Colorado Sun during his ideas pitch. While we’re flattered, the reality is that The Colorado Sun — all of it — is just 13 people. The 13 of us do all the reporting, editing, photography, social media, design, data visualization, newsletters, marketing, customer support, IT, accounting, merchandise shipping, carpentry and dog training work for The Sun (with assistance from our awesome network of freelance reporters and photographers around the state).

Hearing that quote from Polis compelled me to thank you for directly supporting The Sun with your membership. We are putting every dollar of your membership into supporting and producing journalism and trying to run the most efficient newsroom in the state. If you want to help even more, forward this newsletter to a couple of friends or post one of our stories on Facebook, Twitter or even screengrab a headline and post it on Instagram. Every new reader helps our impact grow.

The reason the few of us are able to work so hard to cover this state is because we’re working for our readers, not to run up a big profit or push an agenda. But this setup only works if readers like you step up and chip in. Your membership, starting at just $5/month, goes directly to making more journalism and events like last night’s happen all over the state.

Click (or tap, it works on your phone) here to step up and join our community.

OK, you’re here for the news, so let’s rotate these tires already, shall we?

After taking January off, the Colorado Sun Book Club will return in February with guest author Diana Holguin-Balogh, who will talk about her fascinating work of historical fiction, “Rosary Without Beads.” The group will meet at 7 p.m. Feb. 24 at BookBar, 4280 Tennyson St. in Denver. Her novel revolves around famous gunfighter Billy the Kid, and the conflicted young woman who’s drawn to him. You can read an excerpt from our SunLit archives and also learn more about the author.
The event is free, but please RSVP here. 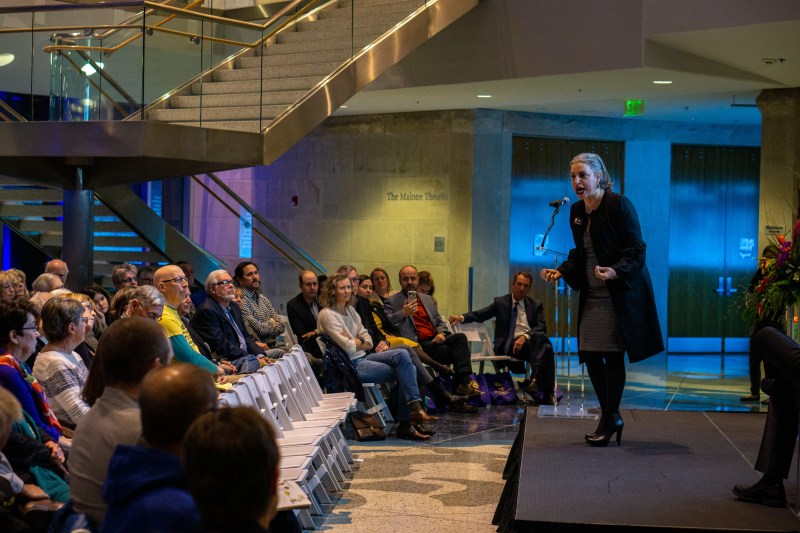 If you missed our (near-constant) promotion over the past few weeks, last night’s event went like this: Five of the state’s leading lawmakers from both sides of the aisle stood in front of an audience of citizens and pitched one big idea that they want to implement in Colorado this year, then took questions from a panel of journalists and the audience. >> Click here to watch the replay and read about the big ideas, or click a name below to jump to a specific pitch.

— How a lawsuit by the Colorado Hospital Association describes the process by which a key rule in Colorado’s reinsurance program was enacted.

Gov. Jared Polis was bullish on stage last night about the proposed public option, but his most recent health care achievement is getting its strongest challenge yet. John Ingold explains why Colorado’s hospital association is taking the Polis administration to court. >> EXPLAINER

As farm-to-school food programs are on the rise in Colorado, so are the challenges of labor, supply chains

More Colorado school districts and public institutions — in urban and rural areas of the state — are working to buy locally grown food to serve in their cafeterias, motivated by both policy and values. But the precarious nature of school funding and the labor shortages that are affecting the entire food industry are threatening to derail their momentum. Tamara Chuang analyzed the state of food in Colorado schools. >> STORY + ANALYSIS

Most Colorado student teachers aren’t paid and need second, third and fourth jobs. Will lawmakers step in to ease their financial burden? 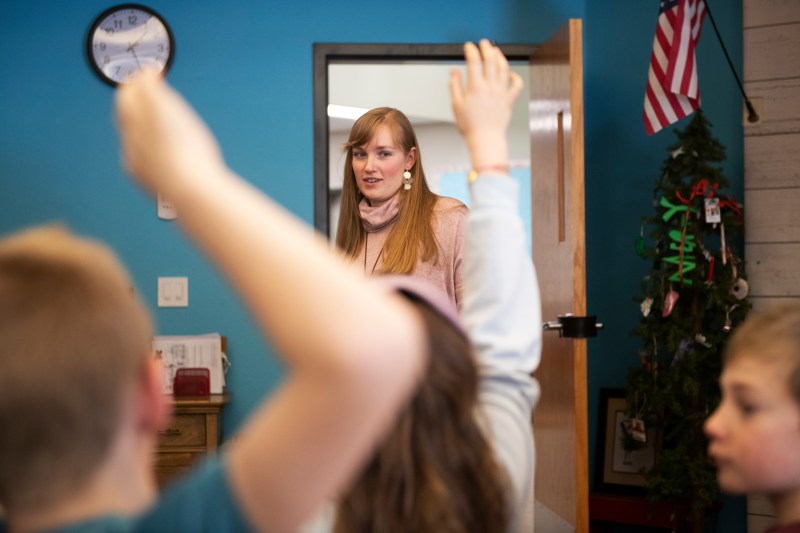 Jen Tarwater teaches sixth-grade Spanish students at Telluride Intermediate School. She started at the school as an intern and student teacher while studying at Fort Lewis College in Durango. (William Woody, Special to the Colorado Sun)

Teaching is one of the only industries that requires people who want to work in a classroom to, basically, work a full-time job for free — and pay for the privilege in the form of tuition. In a state struggling with a teacher shortage, especially in rural areas where second jobs may not be as readily available, state Sen. Nancy Todd, D-Aurora, is proposing a bill to make student teaching more flexible. Erica Breunlin explains the bill and talks to current and former student teachers. >> STORY + PHOTOS

“You create a clear incentive for companies to strip money out of corporations.”

— Colorado Attorney General Phil Weiser on the precedent set by the Colorado Supreme Court’s decision in a case over workers’ comp insurance fines.

“If the state is trying to take away a business, that is not reasonable.”

— Attorney Daniel Goodwin, who represented the owners of Star Motel in Denver, who were fined $425,000 for letting worker’s comp insurance lapse for 1,700 days.

Carol Wood has joined The Colorado Sun as operations and business development manager. Her focus will be on continued internal and external growth of The Colorado Sun and our corner-to-corner coverage of the state as we further establish ourselves as the future of media in Colorado.

“I’m thrilled to be part of this outstanding team and news organization, and am committed to our mission and growth,” Carol said. “I will parlay my career of news organization and business development experience into long-term success for The Colorado Sun.”

A life-long resident of Colorado, Carol has spent her career in media, beginning with a college internship at The Rocky Mountain News to being a founding member of BizWest Media, LLC, and most recently as an editor at MediaNews Group. She and her partner live in Uptown Capitol Hill where they walk the city enjoying the vast variety of cultural offerings and dining options. Wood also is an avid road cyclist, climber, camping aficionado, hiker and snowshoer. Follow her on Twitter @carolwould and LinkedIn: linkedin.com/in/caroljwood.

// TENTS POPPING UP ACROSS THE STREET FROM THE CAPITOL: In the days after Denver’s camping ban was ruled unconstitutional, the people experiencing homelessness that have been regularly sleeping in the park across Lincoln Street from the Capitol started pitching tents. (Quick observation: I walk through this park daily, and the actual number of people sleeping there didn’t seem to change, they just slept in tents instead of on the ground). 9News sent a camera crew to talk to the campers yesterday, but by this morning, the camp was closed by the city health department, which said that a rat infestation in the camp posed an “immediate threat to public health.” Meanwhile, the city is ready to start enforcing the camping ban again under a different part of the law. // Westword, 9News, The Denver Post 🔑, Denverite

// THE STORY BEHIND A POLIS PARDON: This is a really fascinating story about Jamie Matthews, a Durango mother and CPA who received a pardon from Gov. Jared Polis for a crime committed during her struggles while she was addicted to drugs. // Durango Herald

// PROBABLY THE BEST PHOTOS FROM THE STOCK SHOW SO FAR: Photographer Helen Richardson knocked this assignment out of the park: Covering the “reining” event at the National Western Stock Show, which is a little bit dressage, a little bit ice skating and a whole lot of Elton John-fueled fun. // The Denver Post 🔑

// FROM MOULES MARINÈRES TO HARM REDUCTION: We’ve written before about Denver’s Harm Reduction Action Center — a needle exchange and support center that works to prevent overdose deaths and connect people with rehab services — that was one of the central players in the aborted attempt to pass a law allowing supervised injection sites in Colorado. But the center has outgrown its Colfax digs and is heading to the former Le Central restaurant at Lincoln Street and East Eighth Avenue. // The Colorado Sun, Denverite

// RED FLAG CASE FILED AGAINST POLICE OFFICER WHO SHOT 19-YEAR-OLD: Susan Holmes, whose 19-year-old son, Jeremey, was fatally shot by CSU Police in 2017, has filed an extreme risk protection order against Cpl. Philip Morris, the officer who pulled the trigger in the deadly confrontation. The Coloradoan has more background on the original case. // 9News, The Coloradoan 🔑

// BEHIND OCCIDENTAL’S “COSTLESS” PURCHASE OF COLORADO’S BIGGEST OIL COMPANY: I find myself still really fascinated by the $38 billion purchase of Colorado’s biggest energy company, Anadarko, by Occidental last summer. This Reuters deep-dive is pretty wonky, but does a good job explaining the very complex financial maneuver Occidental used to hedge their massive purchase (and avoid paying bankers) and how falling oil prices could hit the company hard. // Reuters

OK, that was plenty of news for today. Thanks again for those of you that came out last night or watched online and for all of you who read this newsletter daily. My inbox is always open to hear about your ideas of how we can improve this newsletter, our coverage or anything else you want to talk about.

Have a great Wednesday and we’ll see you on Friday!