Greetings and happy Wednesday, everyone! I had an absolute blast meeting up with Colorado Sun readers and members last night at The Denver Press Club. And while we’ve really enjoyed these meetups here in the city, we’re hoping to branch out around the state in 2020. If you’re in a non-Denver city and would like to help organize a get-together near you, send me a note and we can get the ball rolling!

We still need more readers like you to sign up for memberships to unlock $5,000 of matching grant money from The Colorado Media Project. If you find the journalism we share in this newsletter every week valuable, there has never been a better time to join. A membership takes just a few minutes to set up (you can do it from your phone!), starts at just $5 a month and makes a direct, immediate impact in your state.

So come join our community and make a real difference (and, bonus, stop seeing these messages in your email).

OK, let’s slice this deep-dish ’za already, shall we? 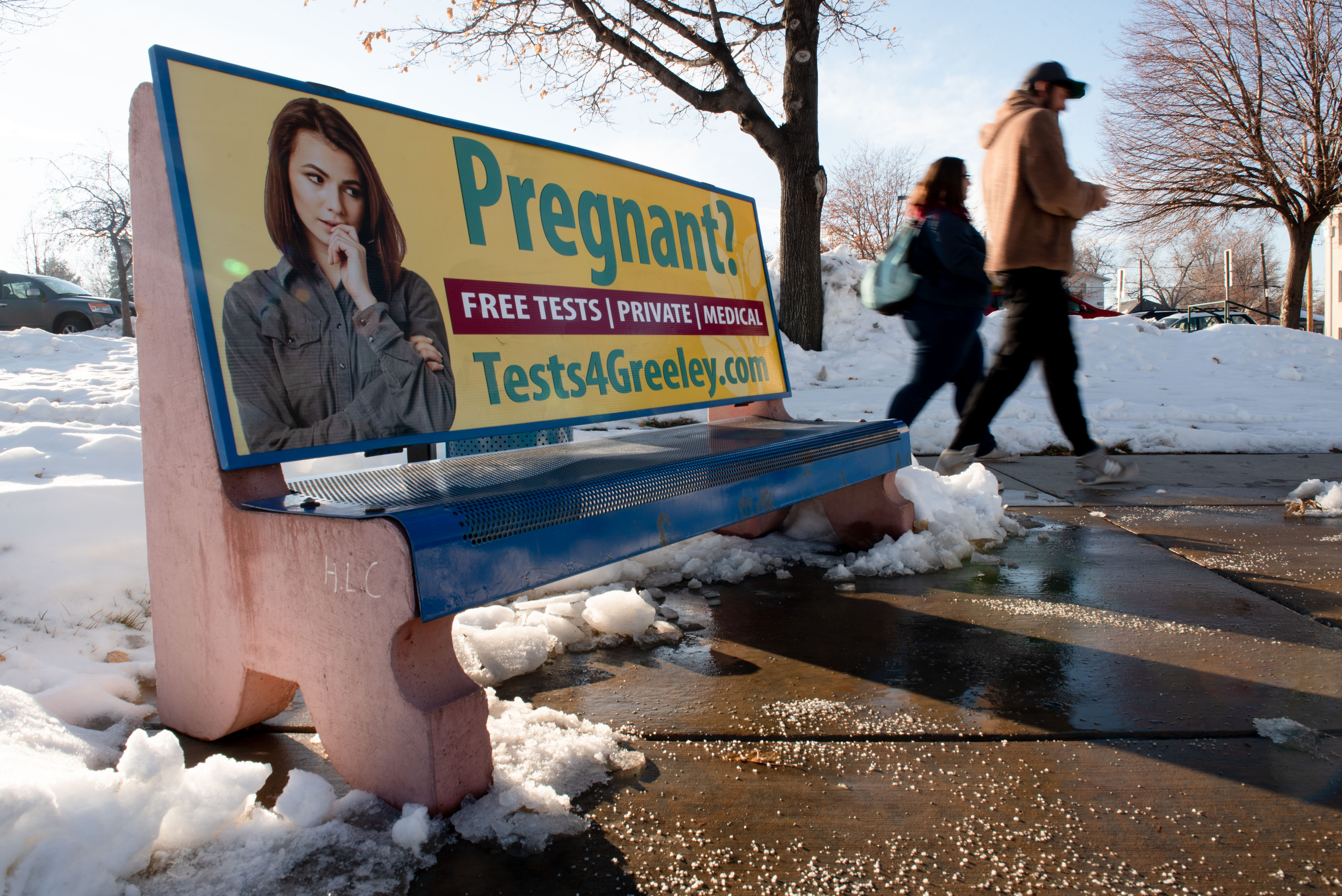 An advertisement for The Resource Center, a Greeley pregnancy center, is posted at 10th Avenue and 20th Street next to the University of Northern Colorado campus in Greeley on Dec. 4, 2019. (Valerie Mosley, Special to The Colorado Sun)

“I have no problem at all with organizations helping women who decide to continue their pregnancies. The problem with these places is they’re deceptive, intentionally deceptive. They promote themselves as offering services they actually don’t, like gynecology.”

“[If] our opponents would just stop by to see what is here they might be embarrassed to have promoted such inaccurate information.”

— Gail Holmes, executive director of the religious-based, anti-abortion nonprofit The Resource Center in Greeley, via email after she said the organization’s attorney advised her to refuse a tour for The Colorado Sun

They look a lot like a typical medical clinic or doctor’s office. They’re advertised with worried-looking young women on bus benches and billboards and fliers on college campuses. But the religious-based pregnancy centers like The Resource Center near UNC in Greeley do not provide medical care, birth control or abortion services — instead they offer pregnancy tests, ultrasounds and and other services as part of a mission to counsel women to carry babies to term. It’s outrage over the gap between how these centers portray themselves and how they operate that has sparked a movement by abortion rights activists to educate women around the state.

INVESTIGATION + PHOTOS: Jennifer Brown and Sandra Fish investigated Colorado’s 50-plus faith-based pregnancy centers, including who is funding them, what the landscape of women’s health services looks like in the state and how they fit into the larger battle over abortion rights.

+ GAG RULE: A Trump administration rule has banned doctors and nurses at nearly 70 community health clinics in Colorado from referring clients for abortion services, even if the client directly asks about them. Jennifer Brown reports on how those medical professionals operate under the gag rule — and which clinics walked away from federal money rather than deal with it.

++ HOW COLORADO REDUCED ABORTIONS: Colorado’s abortion rates keep declining. Free IUDs and easier access to the pill are the reason.

Does Cory Gardner have a breaking point when it comes to Trump? The political climate suggests he’d better not.

“I cannot and will not support someone who brags about degrading and assaulting women.”

One of the biggest question marks for U.S. Sen. Cory Gardner’s reelection bid is how he will deal with President Trump. Jesse Paul interviewed Gardner and Colorado election watchers, and analyzed polling and voter data to discover how the political math of the 2020 Senate race shows that, in many ways, Gardner is damned if he embraces Trump and damned if he doesn’t. Even if you already think you know where you stand in this race, you should read this story to understand the marquee contest.

DON’T MISS STORY: Beyond the look at the 2020 election, Jesse’s story is also one of the most comprehensive catalogs of the evolving relationship between Gardner and the president, a preview of how Colorado’s massive unaffiliated voting bloc is leaning and much more.

+ ANOTHER DEM CHALLENGER: The Democratic field of candidates to take on Gardner had been shrinking since John Hickenlooper entered the race — until University of Denver professor David Goldfischer filed paperwork to get on the primary ballot. Here’s our up-to-date list of who is running in the Democratic primary.

Colorado is the last battleground for restoring wolves in the western part of North America — literally a missing link connecting the wolf population from Mexico and Canada. And while it’s not quite official, a major step to put the reintroduction of gray wolves to Colorado voters next year is complete.

LOOK AHEAD: Jason Blevins reports on the efforts of pro-wolf activists — who typically lobby wildlife commissioners, not voters — and the opposition already being mounted around the state.

I can’t do much better than Jesse Paul’s lede on this story about the recall efforts in the fast-changing (but still quite small) town on the I-70 corridor:

Up here the air may be thinner, but the political drama brewing is thicker than the crust of the famously dense pizza sold at Beau Jo’s on Miner Street.

STORY: Jesse has the on-the-ground report about the all-too-familiar battle between residents and growth in Idaho Springs. 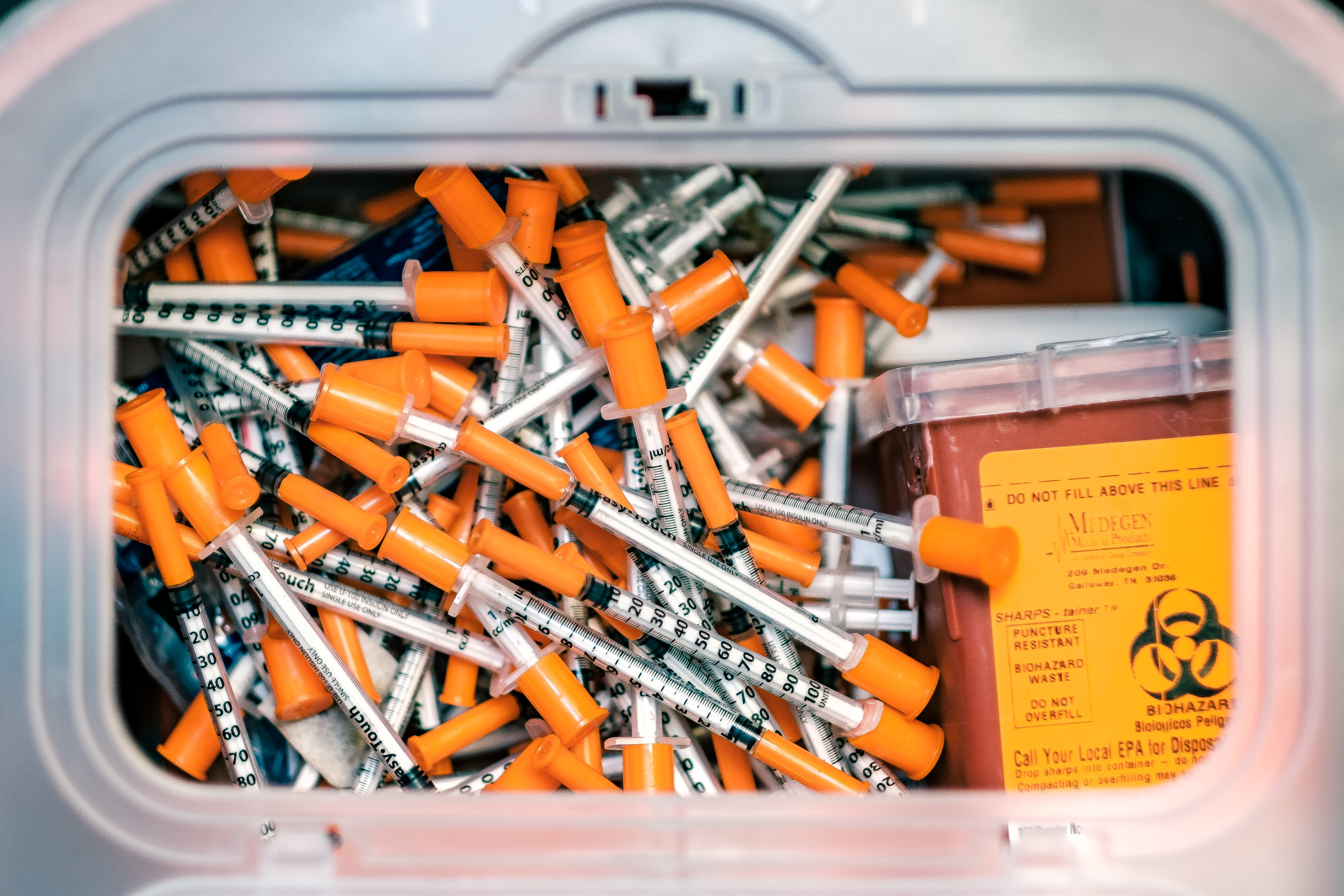 Needles from heroin-users are collected in bins at the Harm Reduction Action Center in Capitol Hill. The center counts more than 900 lives saved by training clients to use naloxone, the antidote to an opioid overdose. (Marvin Anani, Special to The Colorado Sun)

// MEDICAL MARIJUANA IN SCHOOLS: For more than a year, families have been protesting the Douglas County School District’s rules regarding medical cannabis — which bar staff from administering treatment and require parents or caregivers to come to the school and tote the medicine with them. Jessica Gibbs has the story of the long battle between families and the school board and why it doesn’t look to be resolved soon. // Colorado Community Media

// MAJOR OIL AND GAS WRITEDOWN: Chevron, which is now Colorado’s biggest oil and gas producer after purchasing Anadarko earlier this year, just cut the value of its assets by $10 billion and could trigger a ripple effect through the industry. // Wall Street Journal ?

// THREE COLORADO CITIES ARE “BOOMTOWNS:” Denver, Longmont and Greeley all made the list of top 10 “boomtowns” as ranked by population and job growth. // Greeley Tribune

// WHAT RTD’S OPERATOR SHORTAGES LOOK LIKE: Reddit user u/Fantasma3 posted a video of a huge line of commuters waiting to board the light rail at the 18th and California station yesterday. I’m sure the $40 million in planned cuts at RTD will somehow … help this? // /r/Denver, CPR News

// T-MOBILE + SPRINT VS. CHARLIE ERGEN: This is a heck of a lede about one of Colorado’s richest people: “T-Mobile’s $26 billion merger with Sprint may soon hinge on whether a judge believes media tycoon/Dish Network founder Charlie Ergen is a man of his word.” // New York Post

// OLD SCHOOL’S NEW LIFE AND OTHER HOUSING NEWS: The beautiful old school in Denver’s Golden Triangle neighborhood that has sat empty for 45 years (which, if movies have taught me anything, means it’s haunted) will finally be developed into … something. Meanwhile, Durango — in the midst of a housing crisis — rejected a 144-unit apartment complex, an empty lot on Colfax will become specialized affordable housing for people with brain injuries and there’s a battle over a caboose in Louisville. // BusinessDen, Durango Herald, Westword, 9News

// AMAZON (AND THE COPS) ARE LITERALLY WATCHING US THROUGH DOORBELLS: Gizmodo discovered that the city of Denver has at least 1,788 active Ring cameras — from the smart doorbell company now owned by Amazon — uploading footage every day to the internet (and to a secret network accessible only to law enforcement). // Gizmodo, Ars Technica, Denver7

// THE BEULAH YULE LOG: This is just a cute little story about a nearly 70-year-old tradition that sends hearty hunters into the forest near Pueblo Mountain to find a hidden yule log. // Pueblo Chieftain

// THE YEAR IN TRAFFIC CRASHES: Slightly fewer people have been seriously injured in crashes in Denver this year than last year, but the crashes have claimed more lives. // Streetsblog Denver

// SOME VERY GORGEOUS PHOTOS OF COLORADO: The photography department at The Denver Post contains some of my favorite people in the world (who also happen to be world-class artists with the lens). There are still a few weeks left in the year, but do yourself a favor and look at their gorgeous photos from around the state (and don’t forget to look at each photographer’s picks). // The Denver Post ?

The Thing: “Cautionary Tales” (search your podcast app or check out the website)

Why You Might Like It: You probably don’t think you need another podcast to listen to. I get it. But, for my money, there hasn’t been a better (non-comedy) single podcast episode this entire year than Tim Harford’s explanation of exactly how Warren Beatty and Faye Dunaway screwed up the Best Picture Winner at the 2017 Oscars and how it ties into the Three-Mile Island nuclear disaster and the writings of Galileo. Yes, really. Listen to this feat of compelling nonfiction storytelling for yourself here.

WHAT’S YOUR FAVORITE GIFT? You’ve still got time to send me your favorite go-to interesting holiday gift (Colorado products preferred but I also really like to hear about any affordable, useful trinket that makes for a good gift). Send your ideas to things@coloradosun.com and I’ll be wrapping them up in a Sunriser! Deadline is Friday so don’t wait!

And just like that, you made it to the end of what I hope was a fun, informative newsletter. We talk a lot about how memberships are the lifeblood of our work here (and they really are) but if you’re already a member or just can’t afford it right now, sharing our stories and encouraging other Coloradans to sign up for this very newsletter can be just as valuable.

Just point them to http://coloradosun.com/newsletters to get signed up for free. Every new reader helps us make a greater impact all over this state.

Thanks, as always, and go finish this week strong. I’ll see you back here on Friday.