Good morning and happy First Workday After Daylight Saving Time, everybody’s least favorite annual occurrence. Most of my clocks are internet connected (down to my watch) but the whole “getting dark before 5 p.m.” thing is way more disruptive than having to reset my car’s dashboard clock.

But don’t let the creeping darkness distract you from the fact that tomorrow is Election Day. If you haven’t turned in your ballots, do not put them in the mail. At this point, you must turn them in at a drop-off box.

You can check up on our voter guide for information about Propositions CC and DD, then fill them out and drop them off at your nearest location (here’s a map).

Let’s send it, shall we? 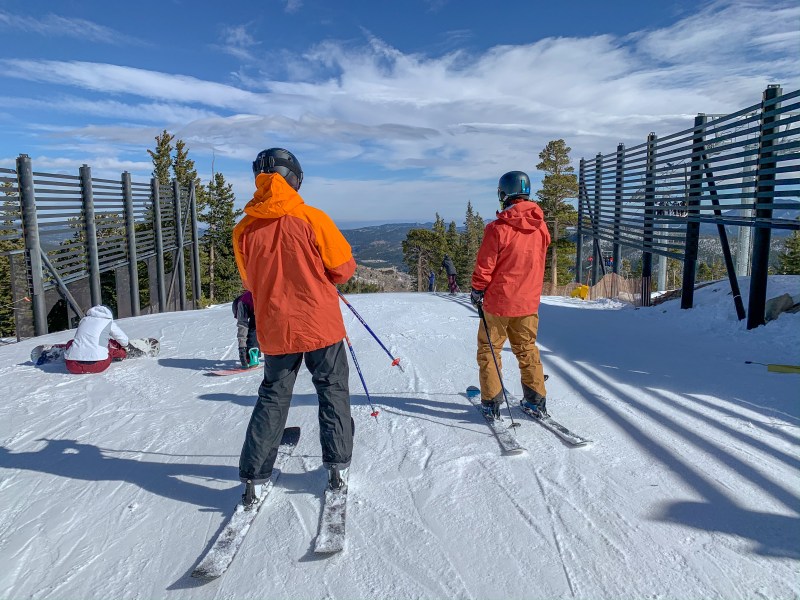 Skiers and snowboarders at the summit of Eldora Mountain Resort in Boulder County on Sunday. (Jesse Paul, The Colorado Sun)

“It’s always one of those days that makes the hairs on my arms stand up because it’s a little contentious. It’s always a little dicey.”

Colorado is vulnerable to a major outbreak of measles, mumps or whooping cough thanks to its vaccination rates, which are among the lowest in the country. That concern is driving a few school districts around the state — including Boulder Valley School District, which has the highest vaccine-exemption rate in Colorado — to start enforcing state law by sending students without shots or an exemption home.

>> Jennifer Brown has more on how the policy is getting more kids vaccinated — and why the state health department can’t do anything to help.

Removing banned tech from China’s Huawei will cost rural Colorado telecoms over $300 million. Will it even fix the problem?

“There are many more security issues than just Chinese manufacturers inserting vulnerabilities into equipment, and the FCC has not really even begun to think about addressing this broader set of issues. That’s what worries me.”

Years ago, Fort Morgan-based Viaero Wireless built out its rural Colorado phone service network using industry-standard equipment that happened to come from Chinese tech giant Huawei. Fast forward to 2019, Huawei has been blacklisted by the U.S. government because of concerns over spying — which the company vehemently denies — and now smaller operators like Viaero are facing massive bills to replace their equipment.

>> Tamara Chuang has a fascinating look at the intersection of national security and rural internet access.

These five bills are designed to make Colorado schools safer. None touches on guns.

Colorado’s School Safety Committee spent a long meeting last week debating which bills they would move forward to try to prevent school violence. But any talk of new gun laws was purposely left out of the proceedings.

>> Our new education reporter Erica Breunlin explains the five bills that will move on to the next phase of lawmaking — and why Democrats avoided the topic of guns. 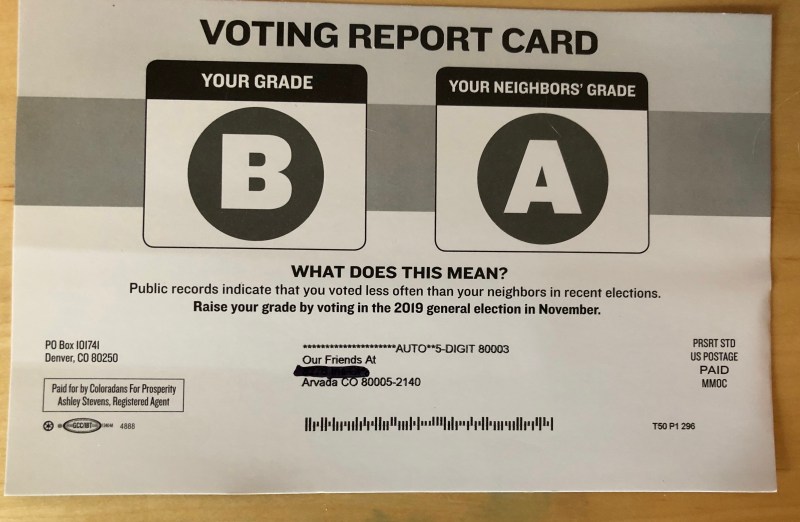 Coloradans for Prosperity’s get-out-the-vote initiative assigned a letter grade to to voters in an attempt to get them to turn in their ballots. (Colorado Sun)

REMINDER: Election day is TOMORROW! Check out our voter guide if you haven’t cast your ballot yet. You have until 7 p.m. on Tuesday to ensure your voice is heard.

“Boulder will continue to grow more slowly than the metropolitan area, and that will keep housing prices high and the city overwhelmingly white.”

// 98.4% of all new Colorado jobs over the past decade have been concentrated in just 10 counties on the Front Range. But as traffic congestion, housing costs and more opportunities for remote work rise, more than 100,000 new jobs could be coming to the rest of the state over the next decade or so. // CPR News

// I’ve spent a lot of time in the little basement bar of the Meadowlark, beginning long before anyone had heard the term “RiNo.” But that same little bar is on the ASCAP (American Society of Composers, Authors and Publishers) most-wanted list after refusing to pay song license fees since 2015. // The Know

// One piece of legislation to watch for in next year’s session: A plan to close all private prisons in Colorado — which could revive shuttered state prison buildings in Centennial and Cañon City. // The Colorado Independent

// Would you pay to live in a 251-square-foot “microunit” — if it meant you could live a block away from Little Man Ice Cream? The developer planning a new neighborhood where Elitch Gardens now sits is betting that at least 41 tenants will pony up for his sardine-can apartments. // Business Den

// Denver can sometimes take months to repaint crosswalks and bike lanes after road maintenance — including on a stretch of East Yale Way where a 14-year-old was killed by a motorist. // Streetsblog Denver

// Online shopping continues to eat into brick-and-mortar retail, including at the iconic outlet mall in Silverthorne, which is bracing for a major drop in sales despite low unemployment and a generally good economy. // Summit Daily

// The very human side of the ramped-up immigration enforcement under the Trump administration is on display in this story from Saja Hindi — including photos from Mexico and here in Wiggins. // The Denver Post 🔑

// I’m trying to get back into jogging again, and I really don’t need to be reading about people like Boulder’s Laura Knoblach, who broke a world record at the Todo Triathlon — a 48-mile swim, 2,240-mile bike ride and 524-mile run — by 10 hours. // 9News

// My favorite website was Deadspin. Full stop, no qualifications. Using the framework of sports to fearlessly analyze the dynamics of power, wealth and labor in America made it a must-read — plus it was just fun. If you haven’t been following along, Deadspin effectively died last week after — stop me if you’ve heard this before — a private equity firm bought the profitable site and promptly tried to force its independent editors and writers to stop doing the things that made the site so unique. So every single writer and editor quit.

This is not a new story in media — especially newspapers — and it encapsulates so much of what drove the journalists that own and operate The Colorado Sun to strike out to try to build something new and sustainable. So here’s a quick list of things to read to understand what’s happening:

Why You Might Like It: You probably don’t need me to tell you about how great Instant Pots are, especially as we get deeper into stew-and-roast season, but for some reason a bright red version of the Instant Pot is just $60 on Amazon right now (all the other colors are still $100). I imagine this deal won’t last long, so go grab one while you still can and let’s swap recipes.

We will be back here on Wednesday with the results of Tuesday’s election. There’s a lot at stake on the 2019 ballot, and how voters decide on two statewide ballot measures could say much about the future of Colorado politics.

For the third time: DON’T FORGET TO VOTE.

See you on the other side.