I want to kick off today’s newsletter by saying that it is full of the kind of journalism that takes time. From a major investigation into the Colorado Catholic Church abuse report to explaining the complex (but impactful) world of hospital pricing to an in-depth, interactive guide to the primary election from a Colorado perspective, dozens (hundreds?) of man-hours went into helping the people of this state stay informed.

Your membership is why we can take the time to get it right. Because we work for you and not some shadowy entity more concerned with clicks than impact, we can put in that extra effort. So I just want to say thank you — and encourage you to share this impact by forwarding this Sunriser to people in your life. The more people see this work, the bigger the impact can be.

We can take the time to get it right because we work for our readers, not some distant owners more concerned with clicks than impact. Now is the time to step up and become one of the thousands of Coloradans who support this kind of journalism. For as little as $5/month, you can invest in a more informed community and help tell these stories that would go untold.

OK, let’s shovel this snow (again?!) already, shall we?

Neil Elms at the back door of his home in Great Barrington, Massachusetts, on Jan. 25, 2020, after he spent hours talking about the abuse he suffered as a child by a priest while in Catholic school. (Joe Amon, Special to The Colorado Sun)

When the Colorado Attorney General’s Office in October released its report on priest abuse in the state’s three Catholic dioceses, the numbers were staggering: 43 priests had abused at least 166 children. But while the investigation was powerful in its breadth of stories, we never really got a sense of just how impactful the abuse was — and continues to be — on people’s lives. Until now.

Reporter Jesse Paul traveled to Massachusetts to hear the story of a man who was raped as an 8-year-old at Holy Family School in northwest Denver. His abuser was not only a high-ranking priest in the Denver Archdiocese, but also his father’s best friend. Take some time today to read Neil Elms’ story. >> STORY & PHOTOS 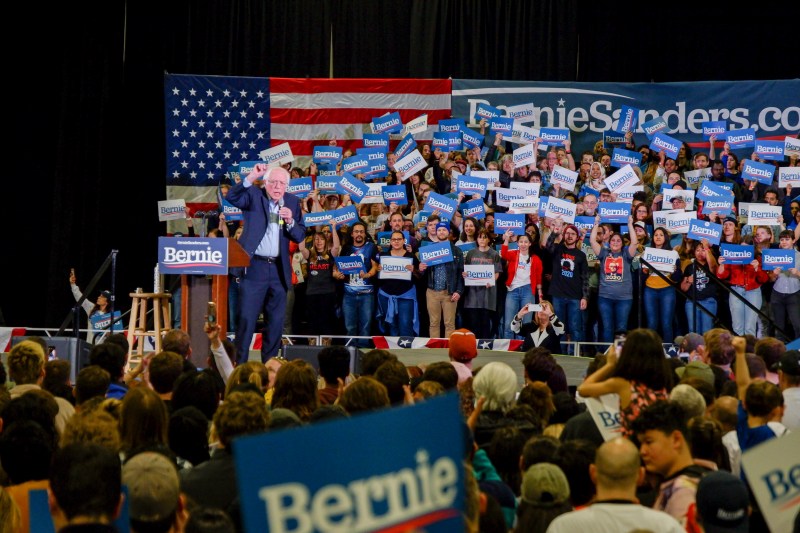 Bernie Sanders at a Denver rally at the Colorado Convention Center on Sunday, Feb. 16, 2020. (Jesse Paul, The Colorado Sun)

If you’re voting in the Democratic presidential primary, you’ve probably been inundated with messaging from the campaigns by now. But many of the issues can feel a little distant from your life here in Colorado. So we built a tool that lets you explore where the seven leading candidates stand when it comes to issues near and dear to Colorado voters — from public lands and marijuana policy to oil and gas and the electoral college. Go poke around this tool before you fill out that mail-in ballot. >> INTERACTIVE VOTER GUIDE

Author’s note: I built this tool from scratch to showcase John Frank and Brian Eason’s hard work over the past two weeks and I’m very interested in your feedback! What did you like? What didn’t you like? How could this be more useful? Send me an email at eric@coloradosun.com!

“This has helped us get back on our feet and pay off debt. It’s been a real godsend to us.”

— Custer County Schools custodian Brett Berry, who moved into housing created by the school district after living in a studio apartment above the local laundromat.

The housing crisis in rural Colorado has become so severe that school districts, towns and counties are taking matters into their own hands. Instead of waiting for developers to come in and increase the housing stock, local governments are building homes and apartments for teachers and deputies and others who are the lifeblood of the communities but are being priced out of the market or living in substandard housing. >> STORY

“The purpose of this is to improve the system, not straight-up penalize folks … You can’t hit a goal if you don’t set one.”

“If we’re not starting off by trying to reduce cost before we set those structures in place, it effectively cements the very high cost that consumers are being charged. And that is not sustainable.”

// ’TIL THEFT DO US PART: Kerri Johnson, who along with her husband pleaded guilty to charges stemming from a $3 million ski theft scheme from Aspen Ski Co., told a judge that, sure, some things about their online business venture seemed off, but “I made the decision to trust (my husband) and that was my mistake.” He got six years. She got 90 days. // Aspen Times

// POT, MEET KETTLE: Acting BLM manager William Perry Pendley defended the agency’s move from Washington, D.C., to Grand Junction, which some have interpreted as a ploy to gut the bureau. And better to take up residence next to the oil and gas lobby, he said, than the cannabis industry. // CPR

// WHERE THERE’S SMOKE, THERE ARE TAX DOLLARS: Speaking of weed, though cannabis sales in Colorado looked ready to plateau this time last year, sales actually surged to $1.75 billion in 2019, up 13% from the year before. That sum sent $302.4 million in tax revenue to the state. // CNN Business

// FOLLOW THE OSCAR: What better year to visit the Colorado Dragon Film Festival than now? The Feb. 20-23 display of Asian and Asian-American films comes on the heels of “Parasite” winning the Academy Award for Best Picture. // Colorado Community Media

// OUT BEFORE THE STARTING GUN: Add one more thing to the list of events disrupted by the international outbreak of the coronavirus. A Denver marathoner who needed just participation in the Tokyo race to complete the worldwide six majors is out of luck after the event was restricted to elite athletes only. // CBS4 Denver

// BUT WILL THE BAND GET BACK TOGETHER? After reading about Blago above, you’re probably wondering how disgraced Illinois governor Rod Blagojevich did his time in lockup at FCI Englewood before a presidential commutation set him free after serving eight years for trying to sell Barack Obama’s vacant U.S. Senate seat. If you guessed “Jailhouse Rock” you get partial credit. Oh, Rod, we knew you when. // Westword / The Denver Post

// DOOMSDAY ON A BUDGET: If you don’t have the time or the cash to build your own fortress against the end of civilization as we know it, perhaps we could interest you in an apocalyptic timeshare? // KUNC

// IS FEBRUARY THE NEW MARCH? If you’ve always spouted the conventional wisdom that March is Denver’s snowiest month, you may need to recalibrate your equipment and freshen up your photos of snow-covered patio furniture. With the most recent dump on Tuesday, this ranks as the snowiest month since March of 2016, and February has prevailed over March in six of the last 10 years. // 9News

OK folks. That was a lot to process and I want to thank you for sticking it out. Even if you don’t read everything today, I really want you to take the time to read the story about Neil Elms to see the personal side of what can sometimes feel like an abstract concept when you read the news.

And when you’re done trying out our presidential primary guide, send it to the voters in your life and let us know what other kind of information we can put together for you as a citizen to make participating in democracy easier.

Stay warm and we’ll see you back here Friday!