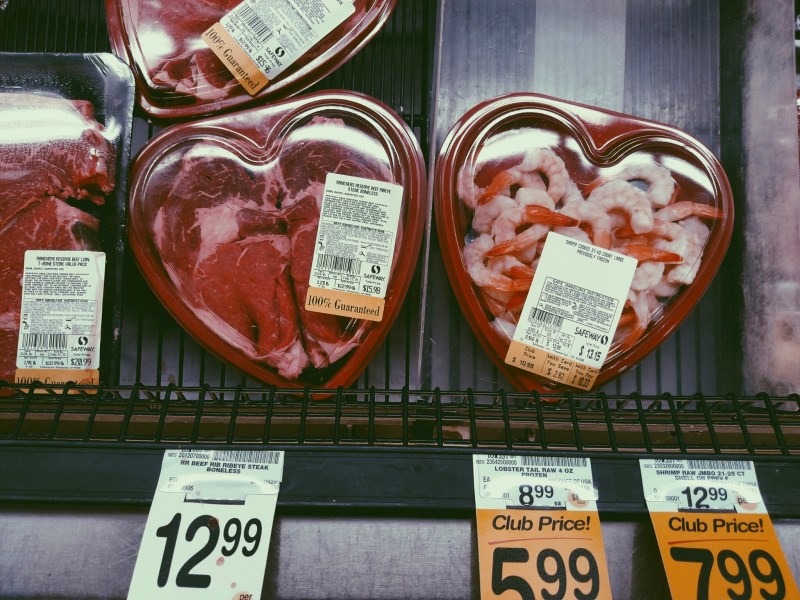 Some very romantic surf and turf in a Denver Safeway, circa 2015. (Eric Lubbers, The Colorado Sun)

Good morning and happy Valentine’s Day-on-a-Friday-before-a-three-day-weekend, which all but guarantees that every restaurant worth its salt (pun only slightly intended) will be packed to the gills. The good news is that if you don’t have reservations, you can always skip the prix fixe menu and whip up a romantic dinner at home.

But before you rush off to find the perfect heart-shaped steak, we’ve got a buffet of news for you to dive into.

It’s that time of year, when state lawmakers are, to put it inelegantly, throwing a whole lot of spaghetti at the wall and seeing what sticks. But despite the inelegance of that metaphor, the current crop of bills includes some major changes to health care and environmental policy — plus some bills that are exposing a divide in Colorado’s Republican Party. Here’s a rundown:

“People seem to think that it’s cured and it’s gone, but it’s not. [If PrEP were more available] we would still have so many of our friends and family members sitting here with us.”

Denver-based Alpine Waste & Recycling is one of the few recyclers in the country equipped to recycle foam containers from single-stream customers. (Kathryn Scott, Special to The Colorado Sun)

“I think this is one of many bills about protecting our traditional values.”

— State Rep. Shane Sandridge, R-Colorado Springs, on a bill to limit marriage to being between a man and a woman

“To see the most aggressive slate of anti-LGBTQ bills that we’ve seen at least in the past 10 years is a bit surprising.”

Could mental health support be the key to keeping more Colorado preschool teachers in the field?

Sam Raboin is one of the Behavioral Health Specialists on staff at Early Connections Learning Centers in Colorado Springs. She played with Nora Picard in her classroom at the center’s historic downtown building Monday, Feb. 10, 2020. (Mark Reis, Special to The Colorado Sun)

Colorado is starving for more people to teach its youngest residents, and one of the biggest reasons teachers leave the classroom is being unable to deal with kids’ behavior. Or as one teacher put it, the kids just “have all these big emotions in their tiny little bodies, and if they don’t know what to do with it yet, they just do what they can.” Erica Breunlin has more on how one Colorado Springs school is pioneering ways to help kids process those emotions — and how Colorado could be expanding similar programs statewide. >> STORY + PHOTOS

+ STATE ED BOARD WANTS TOUGHER TEACHING RULES FOR READING: From Chalkbeat Colorado: Colorado consistently has low reading scores, and the State Board of Education opted for tougher rules around how teachers are trained to improve them. >> STORY

+ ONLINE ELEMENTARY SCHOOL ORDERED TO CLOSE: From Chalkbeat Colorado: For the first time, the state board ordered a school to close following low performance. >> STORY

The Western Slope’s outdoor recreation economy had everything but a bachelor’s degree. Colorado Mesa is changing that.

“The idea is to have these students get not only comprehensive business skills but knowledge of public policy, risk management and technical outdoor skills.”

Oil and gas is waning in Grand Valley, but the economy is growing, thanks to new jobs and new businesses centered around the outdoors. But to make sure there is a pipeline of workers with the skills needed to operate these new businesses, industry leaders teamed up with Colorado Mesa University to create the state’s first bachelor’s degree in the outdoors. Jason Blevins has more. >> STORY

+ DEGETTE’S WILDERNESS PACKAGE PASSES HOUSE, FACES RESISTANCE: It’s been 20 years in the making, but Rep. Diana DeGette got her wilderness package — that would protect 660,000 acres of wilderness here in Colorado — to pass the House. But as Jason Blevins writes, its fate doesn’t look good in the Senate and White House. >> STORY

It’s election season. Here’s a guide to some of the best political movies

Clockwise from top left: “The Manchurian Candidate,” “All the President’s Men,” “A Face in the Crowd,” “Gabriel Over the White House,” “The Dead Zone,” “The American President.” (Provided by studios)

I can say, honestly, that I did not know that the David Cronenberg/Christopher Walken/Stephen King picture “The Dead Zone” had a political plot until I read film critic Howie Movshovitz’s excellent guide to the best (and most unexpected) political movies. It’s going right on to my watchlist (right after the Andy Griffith movie “A Face in the Crowd”). I’m guessing you’ll find something to add to your queue here, too. >> GUIDE

As a college student, Ellen Kingman Fisher worked at the Colorado Historical Society. Her first job was organizing the archive of the family of Nathaniel Hill, a mining innovator and Colorado politician who’d come West during the Civil War. She became so enthralled by the family’s letters and documents that she knew that someday she’d write about them. “Hill’s Gold” is the result of that decades-long fascination. And in the SunLit interview with Fisher, she reveals the happy coincidence that unfolded when a curious reader purchased her book.

What defines a friendship? “What’d I Miss?” tackles the question head on, and Ossie and Myra decide, in view of current events, that it’s something very different for politicians than it is for the rest of us.

You didn’t think Mel Tucker, CU’s on-again, off-again football coach, would get out of Boulder without getting the Drew Litton treatment, did you? Turns out Drew has quite an eye for #integrity.

// “TIPPING POINT” FOR BIKES IN DENVER? Has Denver reached the “tipping point” for bicycles, whereby simply connecting its existing bike lanes will open the door to more residents choosing to pedal around town? Advocates suggest the city could be on the verge of a cultural shift. // The Denver Post 🔑

// “WINNERS AND LOSERS” AT RTD: Speaking of ways people get around the metro area, a major change is coming to RTD’s systems, but staff members are already warning that the four plans with differing (and competing) priorities could leave some groups of bus riders out in the cold. // CPR News

// MY DOG THE INSTAGRAM INFLUENCER: The adopted dog he named Blodgett was the runt of the litter and threw up all over him when they first met. But now Ian Krammer’s dog is an Instagram star, thanks to seven years of agility training so Blodgett could accompany him on mountain hikes. But the dog’s fame comes from his urban exploits. But who am I kidding, I just wanted an excuse to type “barkour.” // The Coloradoan

// HEALTH HISTORY REPEATS ITSELF: It’s Black History month, so of course there are recollections of Dr. Justina Ford, Colorado’s first black, female physician. She was denied hospital admitting privileges, so she delivered a lot of babies at home. Turns out that researchers think home births might be safer than hospitals for contemporary women of color. // Colorado Virtual Library, Colorado Trust

// IN SEARCH OF LOOSER LAWS: Would you uproot your family and move to another state for “health freedom”? A dispatch from the latest front in the anti-vaxxer conflicts says Idaho has become a destination for those who don’t want to immunize their kids. // KUNC

// MASSIVE AMAZON LANDGRAB NEAR SPRINGS AIRPORT: I’m having a hard time visualizing just how big 4 million square feet is, but thankfully the Gazette did the math. A new Amazon distribution center planned for land near the Colorado Springs airport would be the biggest building within several states and bigger than both of the city’s existing malls combined. >> Gazette 🔑

// OIL PRICES DRAG DOWN EXTRACTION: The oil and gas company operating closest to the metro has let go of about 60 workers — 20% of its workforce — as it “streamlines” to match its Colorado footprint. Extraction Oil and Gas lost $43.6 million on $620.9 million in revenue in the first three quarters of 2019. It produced more crude oil and natural gas, but prices are down. // Denver Business Journal 🔑

OK folks, thanks for spending a little bit of your Valentine’s Day with us (and there’s no shame in coming back to read some of these stories when things are a little slower this weekend).

Enjoy the long weekend if you have one, and we’ll see you back here on Monday.