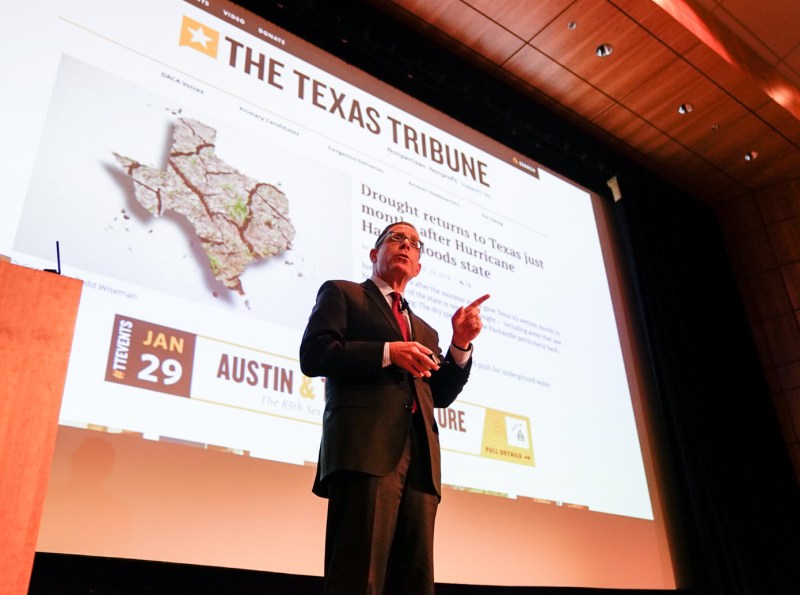 Good morning and happy Friday, all! The staff of The Sun had the pleasure of hanging out with Evan Smith, CEO and co-founder of the Texas Tribune (and host of “Overheard” on PBS). Our editor Larry Ryckman talked with Evan about the future of local journalism and how the Tribune has survived and thrived and had a major impact on his state for more than a decade, before his talk at the University of Denver (seen below).

During his very quotable time here, one comment stood out, about why the Tribune (and now places like The Sun) are pursuing a new model of journalism:

“It’s not about journalism. It’s about democracy.”

A citizenry that knows the facts, knows what’s going on, knows the stories of their neighbors is a citizenry that fights what Smith called “the disease of disengagement.” It makes them better voters, better business people and better neighbors.

People like you who have stepped up and supported The Colorado Sun as members are the reason we can do it here in Colorado. Thanks, as always, for helping make our citizenry more informed. And every time you share one of our stories or tell people about our newsletters, it makes your support go even further.

By rethinking the idea of what a news business can be — by making it ethical, nonpartisan, transparent and beholden only to readers — The Sun has already made an impact on Colorado. And we’d love to have you on board to help us serve even more of the state.

Memberships are a cheap, direct way to do something good for your community. Starting at just $5/month, you can claim a stake in making Colorado better. Pop on over to http://coloradosun.com/join and ride the good feeling you get when you join right into the weekend.

We’ve got big plans for our future here in Colorado, and we’re thrilled to have you on the team.

OK, we have a full plate of news ahead of us here, so it’s time to get past the appetizer and into the entreé so you can get to your weekend.

Let’s step into our crampons and climb this ice already, shall we?

Lorena Garcia casts herself as the true progressive in U.S. Senate race. But first she needs to make the ballot. 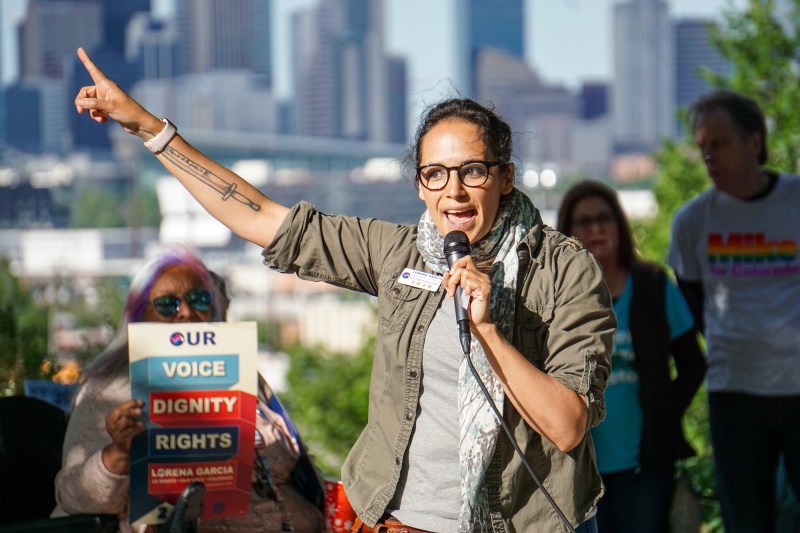 Running for the Senate is a complicated, expensive process. But Lorena Garcia, who is positioning herself as the progressive alternative to both John Hickenlooper and Andrew Romanoff, is using what she sees as voters disillusioned with traditional candidates — and thousands of signatures — to try to make a dent in the race to take on Cory Gardner. John Frank has more on her candidacy and what her steep path to the nomination looks like. >> STORY + PHOTOS

Ice climber Tyler Stableford of Carbondale descends into Box Canyon in the Ouray Ice Park on Jan. 5. Stableford, who has been climbing for three decades, has been regularly coming to Ouray to climb ice for the past several years. (William Woody, Special to The Colorado Sun)

What started out as a few rowdy locals climbing frozen leaks from an old water pipeline has turned into a world-class ice climbing destination, writes photographer William Woody, who has a dispatch from the 25th anniversary of the event that draws thousands to the town of Ouray every year. This may be the story that finally gets me out to climb some ice. >> STORY + PHOTOS

Reproductive rights groups are bracing against waves of challenges to abortion access in states all around the country, and with a conservative majority on the Supreme Court, many are worried about the fate of Roe v. Wade. That environment is the backdrop for the decision by NARAL Pro-Choice Colorado to split from its national group and rebrand as Cobalt, in order to double down and focus on issues here in the first state to legalize abortion back in 1967. >> STORY

+ OP-ED: The president of what is now Cobalt, Karen Middleton, explains in an opinion piece why the group made the change.

“He had it good and it wasn’t enough”: How a resort executive’s stolen-ski scheme shocked Aspen

“This is not a moment-of-weakness case. This is a person who made a good living and chose to steal millions of dollars on top of that. He chose crime. He chose theft.”

You may have seen the headlines of a former Aspen ski executive being sentenced to six years in jail for a scheme to resell stolen skis. But Jason Blevins has the details of the “man with two faces” — a father and city councilman on one side and a ruthless bully of a boss and now convicted embezzler. This is a fascinating read. >> STORY

Fish Creek Mobile Home Park next to the Yampa River and bike path. (Matt Stensland, Special to The Colorado Sun)

Kevin Simpson has a follow-up to The Sun’s statewide collaborative project “Parked: Half the American Dream”: A revamp of the Mobile Home Parks Act in Colorado is writing new rules that provide a framework to resolve disputes — without having to hire a lawyer — “between mobile home owners and the park owners they pay rent to. >> EXPLAINER 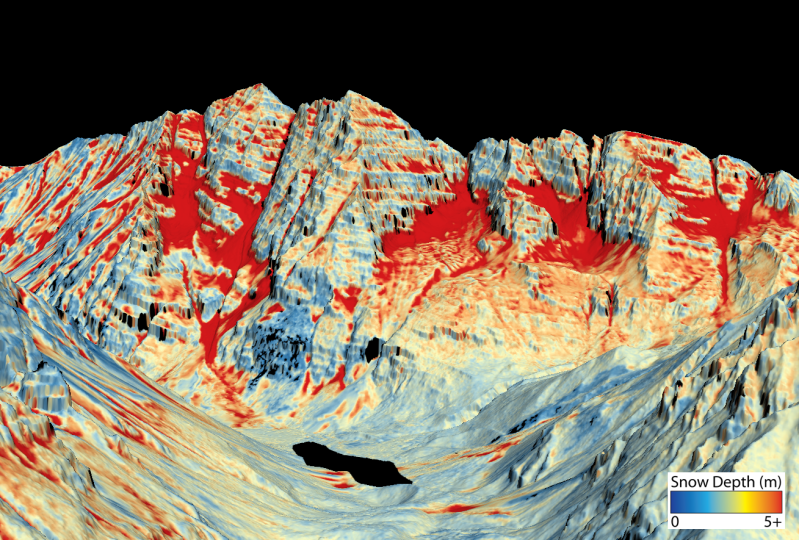 A lidar scan, used to measure snowpack on Maroon Bells near Aspen. One of the problems with water forecasting is that snow doesn’t fall uniformly across the mountains. To better plan for the implications of climate change, researchers are trying to be more precise in their measurements of how much snow there is.

I’m not buying it. If 80% of Western Slope residents want wolves reintroduced, I will eat the governor’s hat.

“I think a compelling case is being put in front of the Senate, and so far it hasn’t been rebutted at all — except by the president’s middle finger.”

Earlier this month, at the amazing Big Beers festival in Breckenridge, plenty of breweries poured the latest and craziest stouts. One I’m still thinking about is Telluride Brewing’s Sleeper Pow Day, an imperial stout aged in Woody Creek bourbon barrels. The clean spirit flavors and rich chocolate malt made it a great beer to sip on. Look for it next time you see a good tap list.

// Any dog owner will howl when they recognize the familiar veterinary device that Jim Morrissey employs to convey his feelings about the Humane Pet Act now under consideration in the state legislature.

// In “What’d I Miss?” Ossie and Myra wonder what happens when the neighborhood grocery store turns into an Amazon-owned neighborhood hot spot with a liquor license. 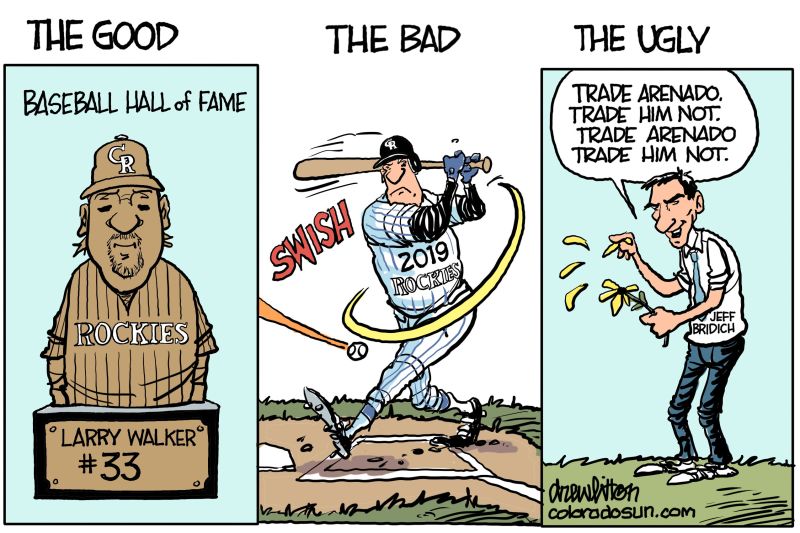 // And as we start to count down the days till pitchers and catchers report, Drew Litton has a quick reminder of the Rockies’ past glory…and present uncertainty.

SPEAKING OF DREW! We’re having a blowout giveaway for our stock of Drew Litton’s 2020 calendar! You can buy one now for just $10, but we’re giving away calendars for free for 10 people who post a link to coloradosun.com/newsletters to Facebook, Twitter or Instagram telling your friends and family why you start your day with The Sunriser. Just use the hashtag #sunriser2020 (and tag @ColoradoSun on Twitter or @TheColoradoSun on FB/IG) to enter. Even if you don’t get chosen in the drawing, we’ll send everyone who posts an additional $5 coupon. We’ll be drawing names on Jan. 29 (Wednesday) so get creative!

Time travel, murder, a ghost and a friend turned violent. Todd Fahnestock packs it all into a single excerpt from “Charlie Fiction,” a novel that began with his appreciation for the opening sentences of “The Martian” and then his own effort to write a compelling opening scene. Those sentences just sat there — until Fahnestock’s conversation with a literary super-agent inspired him to write the rest of the novel. Read an interview with Fahnestock here.

// DENVER’S BUSINESS COMMUNITY ON HOMELESSNESS + “PRACTICALLY INSTANT” HOUSING: The Denver Business Journal launched a major package looking at how the Denver business community is responding — and should respond — to homelessness in the city that goes way beyond just worrying about tents. Read the letter from Editor-in-chief Rebecca Troyer for links to each piece and why they put it in front of their paywall. Meanwhile, on the east side of town, the Quality Inn and Suites on Quebec Street in less than a year turned from a for-sale hotel to a 139-unit affordable housing facility that will immediately house people — some coming directly from the street. // Denver Business Journal, Denverite

// THE WOMAN GETTING ANGRY MESSAGES MEANT FOR CORY GARDNER: Calling your lawmaker is still one of the most direct ways to make your voice heard, but for Laura — a Grand Lake resident with a number that is one missed key press away from Sen. Cory Gardner’s office — her voicemail is full of angry impeachment-related calls. Marshall Zellinger talked to Laura and has recordings of a few of the voicemails you can listen to for yourself. // 9News

It’s a little remarkable that we’re so close to the end of the first month of 2020. But thanks for taking a break to catch up on Colorado with us.

Don’t forget to post about The Sunriser (or any of our newsletters) using #sunriser2020 on your social media of choice to get your free (or at least heavily discounted) Drew Litton calendar so you can keep track of this year as it flies by.

Have a phenomenal, eventful, restful weekend and we’ll see you here next week!