Good morning! You have less than 48 hours left of the 2010s, depending on when you read this. It’s a pretty arbitrary marker of time, honestly, but if you think of it as an excuse for self-reflection rather than a deadline, you might be able to make something out of it.

Sun Editor Larry Ryckman wrote a column reflecting on a year in which more states, cities and neighborhoods found out what it’s like to not have reporters hitting their streets.

Your membership with The Colorado Sun is a direct action to strengthen this state’s democracy, and we couldn’t be more grateful. Here are a few ways you can help us maintain and grow The Sun in 2020 and beyond:

The Colorado Sun is fighting back against the negative trends in the journalism business, and we’re doing it with readers like you. Help us strengthen Colorado’s democracy by becoming a supporting member today. It takes just a minute — and you can do it right from your phone — to take direct action to keep you and your community informed.

(Because it’s the new year, if you use the code DREW when you check out, we’ll send you a free Drew Litton 2020 calendar!)

OK, let’s chill this champagne already, shall we? 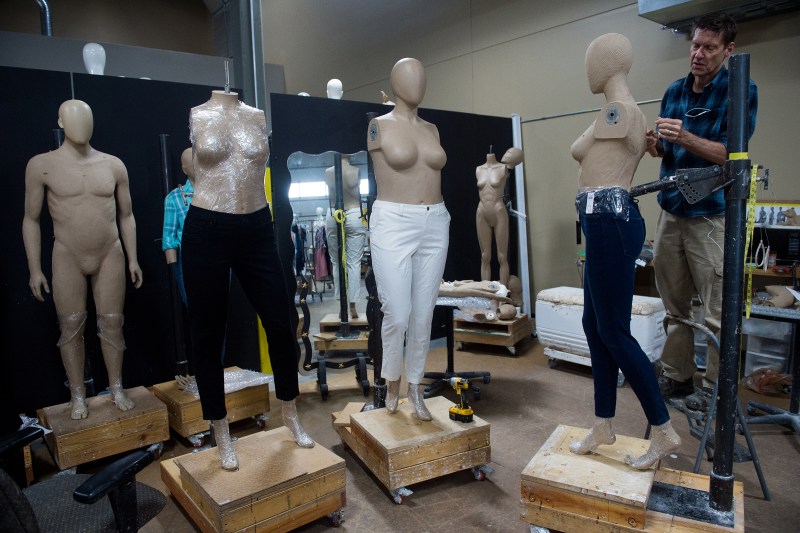 Gary Alsum sculpts a mannequin out of clay in the studio at Fusion Specialties on Dec. 11, 2019, in Lafayette. (Seth McConnell, Special to the Colorado Sun)

“If the butt’s not big enough we just put a little more clay on.”

If I had my druthers, this entire newsletter would just be the dozens of incredible photos that Seth McConnell took at the Fusion Specialties mannequin factory in Lafayette. But this story from Carol McKinley is more than just cool images, it’s a tale of how design choices made in Boulder County are helping speed the fashion industry’s shift to reflect the actual humans who buy clothes — from male mannequins with a little spare tire to female shapes that — gasp — actually have real shoulders and muscles. >> STORY+ PHOTOS

“They tend to think ‘Oh, it’s moderate, I’ve been out on other moderate days and so today is like those days.’”

Michelle Lindsay, a 29-year-old from Fort Collins, died on Dec. 8 while backcountry skiing on Cameron Pass. Lindsay and her partner had researched conditions on the Colorado Avalanche Information Center’s website the day of the fatal slide, but the combination of the “moderate” forecast and the pair’s familiarity with the area led them to venture higher than originally planned. Jesse Paul talked to avalanche safety experts about the 40% of fatal slides that happen when forecasted avalanche danger is at its lowest levels. >> READ THE ANALYSIS HERE

I can’t do better than Jennifer Brown did explaining this, so I’m just going to lift this straight from her story:

One person in a foster kid’s life isn’t paid to show up.

Attorneys are paid. Teachers are paid. Even foster parents are paid. The person volunteering their time to make sure a child’s voice is heard is a Court Appointed Special Advocate, or CASA, and only about one-third of children who were abused or neglected in Colorado last year were lucky enough to get one.

// THE PRODIGAL BOOK-BORROWER RETURNS: Denver Public Library ended late fees in early 2019. And in that year, Elizabeth Hernandez reports, 35% of patrons who had avoided the library because of them have come back (and often brought the overdue books back with them). // The Denver Post 🔑

// MORE WEIRD, BEAUTIFUL ICE STUFF: The great thing about our state covering so many weird types of geography is that we get to see phenomena like these “frost flowers” that popped up on the San Juan River in Pagosa Springs. // CBS4

// SCARE YOUR KIDS (FOR THEIR HEALTH): 5280 has a great look at how the Dr. Seussian Adventure Forest at the Children’s Museum of Denver is designed for “risky play” to encourage kids to make choices, do scary things and appraise risk — all to make them more self-reliant and resilient. // 5280 Magazine

// ENOUGH ABOUT IN-N-OUT: I’m a well-known shrugger when it comes to news of In-N-Out (my verdict: pretty good burgers, terrible fries), and Westword captured the battle between the true burger believers and those who’d rather eat at Good Times (*raises hand*). // Westword

// THE DEATH OF THE OLD INTERNET: There are going to be a lot of looks back at the decade that was, but this one from BuzzFeed’s Katie Notopoulos hit me right in my gut as both a Friendster/MySpace/Tumblr/Flickr user and a history student who knows how valuable all that missing information would have been for future scholars: “The old internet died and we watched and did nothing” // BuzzFeed News 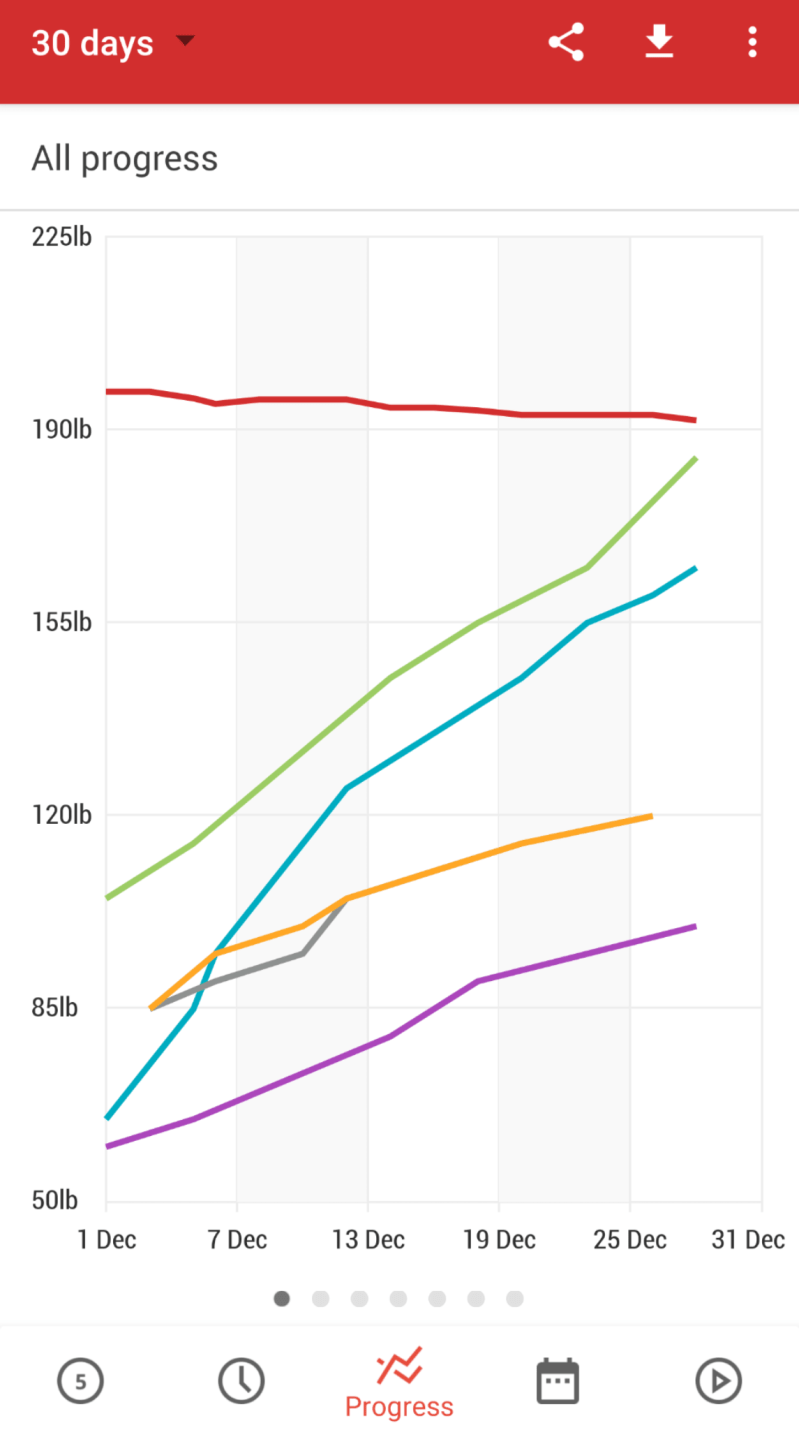 My 30 days of progress (red is body weight, all the other colors are different lifts).

The Thing: Stronglifts, a very simple weightlifting app for non-jocks, fit folks and people of all ages (download here)

Why You Might Like It: I’m going to regret recommending this when the line for the squat rack at my YMCA is five deep during the New Year’s Resolution Rush, but this is one of the rare apps that has actually changed my life. Stronglifts is a workout plan that focuses on just five basic lifts you can do at any gym. If that sounds way too simple, you’ve hit on why it’s both a) effective and b) a realistic way to get fit.

Trendy workouts full of intense cardio are intimidating, easy to get discouraged by and, often, are more focused on looks than health (and it’s muscle loss as you age, not necessarily weight gain, that can quickly lead to lowered mobility and vulnerability to injury). These five lifts work every muscle group in your body and it doesn’t matter if you’ve never lifted a weight in your life. You’re encouraged to start with no weight and very slowly add (5 lbs. each workout) to learn good form, see steady progress and burn a ton of calories/tone your body with three workouts a week.

In just over a month of StrongLifts + 10 minutes on the rowing machine (3x a week), I’m stronger (and lighter and healthier) than I’ve been in years.

So make a resolution you might actually keep, and I’ll see you in the weight room (just please include re-racking your weights and wiping down your station in your resolution).

Thanks — from the bottom of my heart — for spending some of this last year with me and the whole staff of The Sun getting informed about life here in Colorado. I can’t wait to see you all in 2020!