Good morning! I’m going to turn this intro over briefly to our senior editor Dana Coffield who has some context for one of the challenging stories in today’s newsletter:

When we published Jenn Fields’ story about efforts to train people to see and confront systemic racism (even if they don’t feel racist themselves) we knew it was going to make people uncomfortable. That is kind of the point. To see how systemic racism works right in our own backyard, just look to Lafayette.

It took city native Frank Archuleta more than a year to persuade Lafayette’s current leaders to acknowledge and attempt to reconcile an especially ugly moment in town history. The family of Rose Lavato Lueras was asked to donate materials to construct a pool in the 1930s, but then was banned from its use with a “white trade only” sign. When she sued for access to the pool, the KKK burned a cross on her lawn and hundreds of men in hooded robes marched to the pool site.

On Tuesday, the city officially dedicated the city swimming pool to Lavato Lueras — and state Rep. Sonya Jaquez Lewis, speaking at the ceremony to more than 300 people, cited The Sun’s story and read passages to the crowd.

So, yeah, Jenn’s article may make you uncomfortable, but it’s an absolute must-read as we consider how to reckon with the past and move forward as a society.

It’s a heavy, but important note to start today’s newsletter. So let’s gaze, unflinching, into this mirror, shall we?

“I think it’s fair to say that Joe is unstoppable.”

Last night, Coloradans rallied for (and against) the impeachment of President Trump on the steps of the state Capitol Building in Denver — as well as in Fort Collins, Pueblo and Grand Junction (where pro-impeachment ralliers were met with a chant of “eight more years” from Trump supporters). (CBS4, Coloradoan, Pueblo Chieftain, CPR News).

But in D.C., the impeachment process has made Joe Neguse, the first-term Democratic U.S. representative from Lafayette, one of the most visible and energetic politicians in the country even though he’s less than halfway through his first term. Just two years ago he was regulating securities in a state government job and now he’s a key player in the effort to remove the president from the White House.

HOW IT HAPPENED (AND WHAT’S NEXT): Jesse Paul tracked how Neguse’s career (and his failed 2014 bid for Secretary of State) set the stage for his quick start in Washington — and where his future may take him. 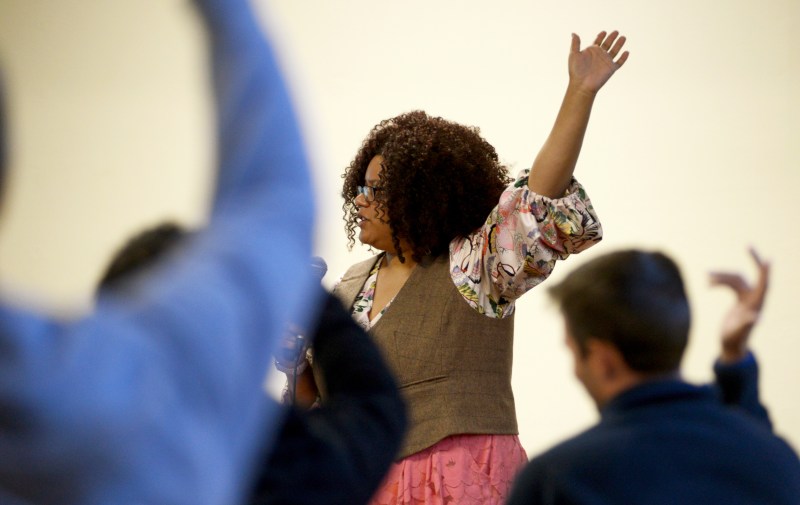 “You can be non-racist and contribute to a racist system. Because being neutral as a system rolls along means you’re contributing.”

— Regan Byrd, leading an anti-racism in training in Boulder.

One of the most difficult aspects of fighting racism is correctly defining it. For many people who don’t experience it themselves, “racism” begins and ends with explicit acts of hate, committed by people wearing hoods or brandishing swastikas. Those acts are easy to see, easy to define and — especially — easy to say “that’s not me.” But as activists and trainers like Denver’s Regan Byrd are teaching audiences in church basements and conference rooms around Colorado, racism exists in the systems they actively and passively participate in — including housing, employment, schools and justice — not just in those individual acts.

STORY + PHOTOS: Jenn Fields has a thorough look at the ways Coloradans are seeking out this training and confronting their own “white fragility” — the extreme defensiveness that some white people display when talking about racism.

READING LIST: Included in Jenn’s story is a list of podcasts, books and articles (including the book “White Fragility: Why It’s So Hard for White People to Talk About Racism” by Robin J. DiAngelo and special recommendations for kids) to help you get started in your own understanding of systemic racism. See it here.

Lost for decades, the Colorado Orange apple has been found — officially

Last month, we told you about the apple revival near Four Corners that is restoring hundreds of historic fruits (while juicing the agriculture economy in the southwest part of the state). But a confusingly named variety that was one of the most popular apples in the late 1800s — the Colorado Orange — was thought to be totally lost. Until now. 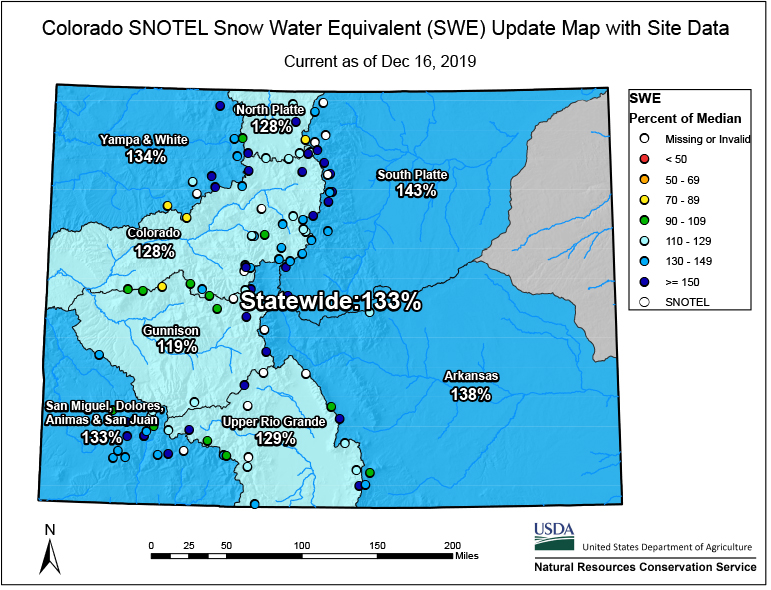 The current level of snowpack in Colorado as of Monday. (USDA)

The number of slides since Thursday, the beginning of a strong winter storm system in the high country, has already topped 80. But it’s a rare in-bounds avalanche at Steamboat Springs Ski Resort that is highlighting one of the indications that this year’s avalanche season is going to be dangerous.

ANALYSIS: Jason Blevins talked to avalanche experts about how a “rotten” layer of snow — created by a huge snowfall in October followed by warm temperatures and rain in November — will haunt the backcountry for the entire season.

As the teen mental health epidemic escalates, emergency rooms get innovative and a for-profit hospital sees an opening

“We’re trying to interrupt that cycle of emergency room visits.”

The mental health landscape for teens in Colorado has a huge shortage of treatment options up and down the spectrum, from weekly therapist visits to intensive, round-the-clock treatment. So it’s no surprise that the for-profit company Insight Behavioral Health saw Denver as a market to open its newest facility — which is geared toward families with commercial insurance and does not take Medicaid or reveal its treatment costs.

STORY + HOW AN EMERGENCY ROOM IS ADJUSTING: Jennifer Brown looked at how the for-profit facility fits into a state with major needs — and how Denver Health is tackling the issue of teen mental health by putting a psychologist on the front lines of the ER.

+ ANALYSIS: HOW DO COLORADANS WANT THE STATE’S HEALTH CARE TO WORK? John Ingold analyzes two polls that show that Coloradans both overwhelmingly support either Medicare-for-All-style universal coverage or a public option plan (when they aren’t given details) and have weak support for the real public option plan proposed by the Polis administration.

— The number of students at risk of falling behind in kindergarten in Colorado.

// TRACKING CONCUSSIONS IN COLORADO SPORTS: I think a lot about the number of times I “got my bell rung” playing high school football (almost always during practice, never during a game, but my brain doesn’t care about that distinction). Colorado does not track high school sports concussions, but KUNC’s Michael de Yoanna and Reveal (from the Center for Investigative Reporting) used a national investigation and open records requests to calculate that there were more than 6,000 suspected concussions in Colorado in the past five years — and that number is almost certainly a low estimate. This is a really impressive piece of investigative reporting. // KUNC

// AIR FORCE SERGEANT TIED TO WHITE SUPREMACIST GROUP: The issue of white supremacist Nazi sympathizers in the military has gotten the attention of Congress and is part of some hate groups’ recruitment plans. Here in Colorado, the Air Force has demoted a sergeant and is pursuing discharge proceedings over his connection to Identity Evropa, a white nationalist group. // Military Times, Marine Times, The Denver Post 🔑

// DENVER PURSUES PRIVATE PARTNERSHIP DESPITE FAILURES: Public-private partnerships — P3s — are touted as ways for governments to begin major capital projects without issuing debt. But sometimes, like the messy breakup around the DIA Great Hall Project, they can cause delays, extra costs and lawsuits. Regardless, as Nathaniel Minor writes, the city will use the same model in its major National Western site revamp. // CPR News

// MORE DOGS THAN CHILDREN IN DENVER: Denver truly is a millennial city, where all of us who can just barely afford rent/health care/transportation/food choose to focus our parental affections on dogs (instead of having kids). Denverite has a great look (and lots of photos of very good dogs) at the Denver Dog Park Master Plan to see what our canine obsession says about the growing city. // Denverite

// HOW A VERY WELL-OFF 35-YEAR-OLD SPENDS HER MONEY: A very fascinating/enraging trend has emerged over the past few years: The money diary. Basically, someone (anonymously) tells an outlet their financial situation and then tracks every dollar they spend for a week. This week’s edition features a 35-year-old management consultant from Denver who makes $135K a year, rents a shared ski house, splits her Netflix account with friends and — basically — rips off our public transportation system. Prepare yourself for a window into a very different financial world. // Refinery29 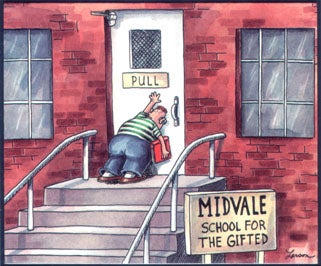 Why You Might Like It: I don’t know if it’s been obvious over the years of reading my newsletters, but you can pretty much blame Gary Larson’s The Far Side for the personality and voice I developed. Larson walked away from the comics biz in 1995, before the Internet really made it big, leaving his comics in dusty compendiums on bookshelves all over the country to be devoured by little nerds like me. But in maybe the most welcome event of 2019, Larson announced that not only is he alive, and not only does his strip have an online home for the first time, but he’s making new cartoons. I know Christmas isn’t until next week, but there’s no way I will get a better gift than this (sorry, family and friends).

SUN READERS’ GIFT GUIDE: Thanks for all the new suggestions for the Sunriser readers’ gift guide! I’ll be updating it with new additions later today, but keep those suggestions for cool, local/useful/affordable gifts coming.

OK, it’s a busy week, and I’ve already taken up a lot of your time. Get back to your to-do list (and don’t be afraid to snooze this email in Gmail or your provider and come back to it later when you have some time).

Have a great Wednesday and I’ll see you on Friday!

Energy
The Associated Press
1 hour ago