Good morning from the dawn of the 12th-shortest day of this winter cycle. 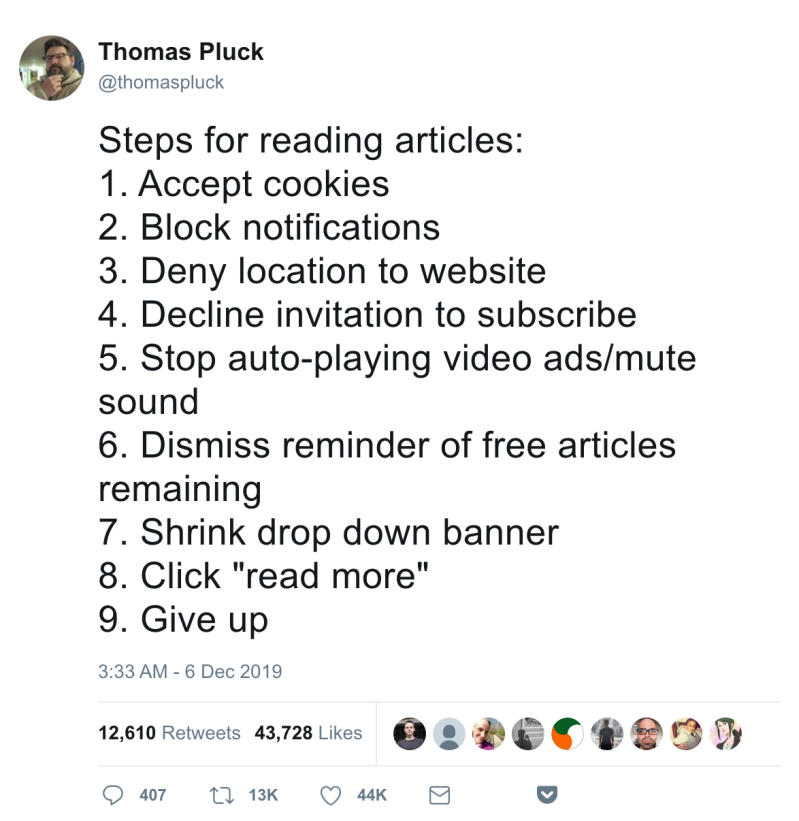 People seeking news are frustrated. But when you visit coloradosun.com, the only thing on that list you have to deal with is No. 4 (an invitation to read this very newsletter which disappears if you log in to the site).

That is 100% by design, chosen by the journalists who own and operate The Sun. We don’t have paywalls, we don’t track or sell user data, we skip flashy ads for less-intrusive underwriting and have strived to make our website fast, responsive and easy to read.

All of those decisions to make the reading experience the best in Colorado come at a literal cost. By skipping those annoying (but money-making) features, it means that support from you, the person reading this, is the lifeblood of our ability to make the journalism you see in this newsletter every week.

Our matching grant drive is still going for a short time, so if you value independent, pleasant-to-read news in Colorado, there has never been a better time to join. Just go to http://coloradosun.com/coloradogives and every dollar of your membership will be matched by The Colorado Media Project.

OK, we had a busy weekend, so let’s wrap this gift already, shall we?

Colorado’s economy is predicted to keep growing in 2020, but slower. Here’s what this means. 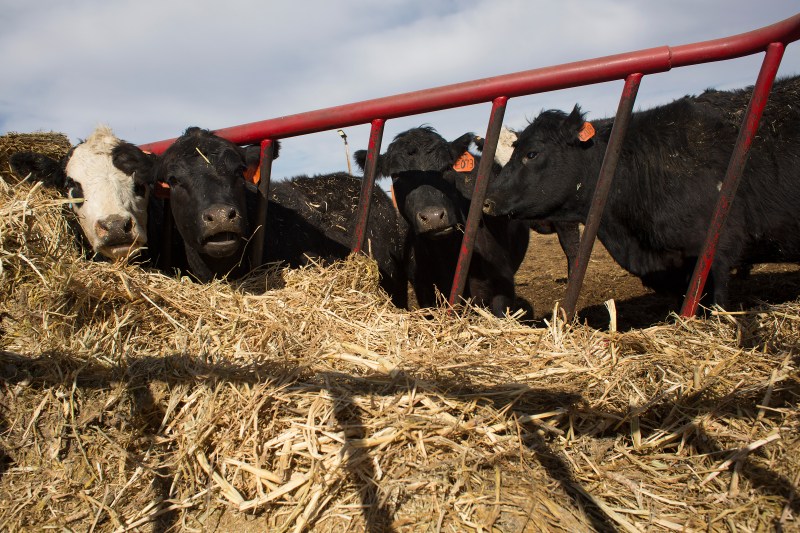 Cows eat hay on the Weathers’ farm near Yuma on Feb. 13, 2019. (Austin Humphreys, Special to The Colorado Sun)

It’s the last month of the year (and decade!) so it’s time for predictions. In Colorado, the University of Colorado economic forecast has been pretty accurate over the years, so Tamara Chuang analyzed their take on 2020, including optimism about agriculture (except for small farmers) and a big dip in construction.

ANALYSIS: There’s a lot to unpack in this report, from cheese makers to population growth to unemployment to a plateauing of the weed biz.

+ LOTS OF JOBS, BUT HOW MANY ARE GOOD? The Labor Department reported a near record low unemployment rate nationwide in December. But is the number of jobs a good measure of the health of the economy anymore? One argument against that measure: Nearly half of all working Americans have low-wage jobs (as in, an annual income of $18,000). And most of those 53 million workers are between the ages of 25 and 54, not the burger-flipping teenagers that people tend to believe work those jobs. Or as Eric Levitz at New York magazine so eloquently put it: “Jobs, Jobs Everywhere, But Most of Them Kind of Suck.” // New York Times, CBS News, New York magazine 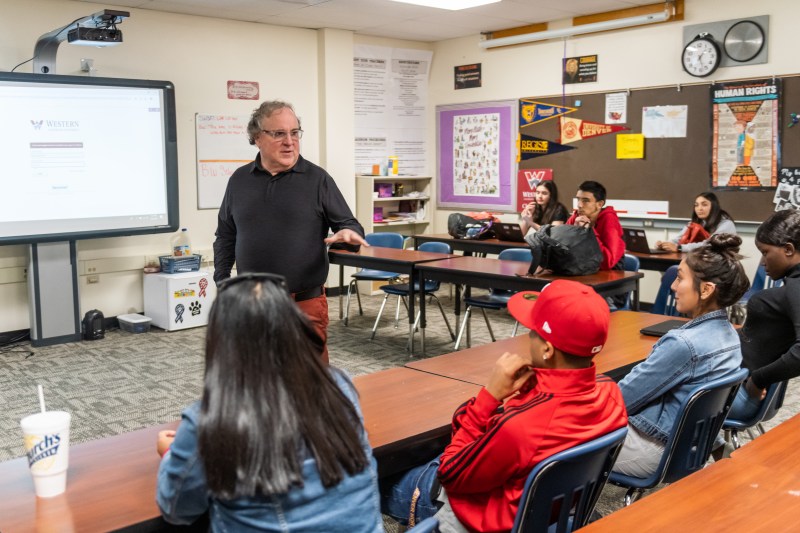 I was lucky enough to earn some college credit via Advanced Placement classes at Yuma High School back at the turn of the millennium. But in the 17 years since I was last in a high school classroom, Colorado schools have greatly expanded so-called concurrent enrollment programs, where students are graduating not just with credit, but actually taking college courses and earning degrees and certificates before they graduate.

STORY: Education reporter Erica Breunlin found that schools and students are not just saving time and money — these programs are helping narrow the achievement gap between minority students and their white peers.

10 states use bottle deposits to boost recycling rates. Could it work for Colorado?

“The bottle redemption program, I still strongly believe, has a place in this solution. I just think we should really carefully consider any unintended consequences before we move forward.”

For many of us out here in the Mountain West, the idea of a bottle deposit program pretty much exists as a code on a soda/pop/coke label you never look at or the plot of a Seinfeld episode. But as Colorado continues to struggle to recycle, the bottle deposit is once again part of the discussion.

HOW IT WORKS IN OREGON:  Moe Clark breaks down why Colorado’s latest attempt at a program was pulled, and how programs in states like Oregon are thriving, even in an unstable global recycling marketplace.

Got any plans tomorrow night? Come down to The Colorado Sun’s Denver Jingle Mingle! Chat with reporters and editors here at The Sun and get to see inside the historic Denver Press Club. Hope to see you there! Details and RSVP for the free event are here.

// HOUSING IN COLORADO: Rent in Denver dropped a little, but homeowners aren’t in a selling mood, meaning my half-cocked plan to buy a house literally made of cardboard and drop it in someone’s cow pasture is looking better and better. // Denverite, The Denver Post 🔑, Wikkelhouse

// “SOUTH PARK” ACCIDENTALLY PRANKS FAIRPLAY RESIDENT: There’s a reason that old movies and TV shows always used “555-” if they needed to show a phone number on screen. Some people just can’t help calling numbers they see on their TVs (and they’re also bad at dialing) as a Fairplay resident found out when “South Park” featured a number that was one digit off of their work phone number. // Mashable

// HEPATITIS OUTBREAK: Two people have died in Colorado during a hepatitis A outbreak that has sickened nearly 300 since 2018. // The Denver Post 🔑

// DENVER’S TREE PLAN: Downtown Denver is one of the worst downtowns when measured by tree canopy (at a measly 4%). So the city is going to spend $9 million to plant 500 trees — that will just barely make a dent in the area’s shade needs. // Denverite

// MASSIVE SCOTCH COLLECTION: Apparently, the late Richard Goodling of Colorado spent the last 20 years or so of his life assembling what whiskey experts are calling “The Perfect Collection” — and all 3,900 bottles of mostly single malt Scotch will go to auction. // 9News

The Thing: AccuSharp (Amazon or your local hardware/kitchen supply stores)

Why You Might Like It: I’ve spent too much money on ways to keep my kitchen and pocket knives sharp, including this weird clamp-and-whetstone contraption I’ve only successfully used once. But for 99% of what you use a knife for, the $10 AccuSharp will not only do the trick and give you a nice edge, but it’ll do it in about 10 seconds. If  you’re looking for a stocking stuffer for your friend/family member with terrible (and unsafe) dull knives, you can’t go wrong.

SPEAKING OF STOCKING STUFFERS: We’re putting together a little reader-powered gift guide! Send your favorite little gift idea (Colorado products preferred, but anything clever and useful is welcome) to things@coloradosun.com and you could be part of it! Don’t wait, we’re hoping to publish in this Friday’s Sunriser!

Before I leave you today, I want to drop another reminder about the end of our matching drive. Don’t miss out on your chance to make your support for The Colorado Sun go twice as far, thanks to The Colorado Media Project.

(Become a member here, or send your friends to the link.)

Also, don’t forget about our holiday mixer TOMORROW NIGHT at the Denver Press Club. Get the details and RSVP here.

We’ve got a big project that launches tomorrow, so keep an eye on coloradosun.com, and we’ll see you back here on Wednesday to talk about it.