You made it through a full week after a holiday. Congratulations! But before you head off into your likely busy weekend, we have a Sunriser stuffed with news that covers such a wide spectrum that you are bound to find at least one thing to read.

Pro tip: If you’re short on time this morning and you’re a Gmail user (or if your email has a similar feature), click the little clock icon at the top of this message and set it to “snooze” until you’ve got some time to digest (say, a quiet Sunday morning).

We have so much news — including a battle over sports on TV to gun culture to health care costs to climbing gyms to public transit and more — that we’re just going to jump right into it.

OK, let’s bolt this grip already, shall we? 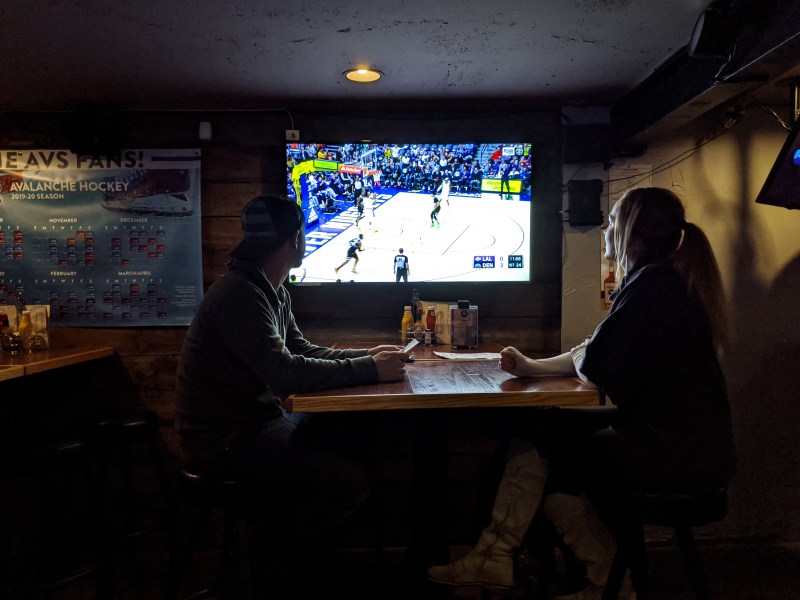 Craig Folmer and Theresa Marcucci bask in the glow of the opening minutes of the Nuggets vs. Lakers game on Dec. 3, 2019, at The Sportsbook Bar & Grill in Denver. (Eric Lubbers, The Colorado Sun)

It’s one of the most exciting winter sports seasons in recent Colorado memory, but most TV subscribers in the state still can’t watch our best pro teams. Kevin Simpson and Tamara Chuang put together an excellent explainer of what’s at the core of the fight over streaming, why both sides are digging in and how fans are adjusting to a blacked-out season.

EXPLAINER: No matter how much you think you know about this sports battle, you’ll learn something here.

+ CORD-CUTTING, BINGE-WATCHING AND REGIONAL SPORTS: This fight might seem like just a battle between billionaires. But as Tamara and Kevin write in this companion piece, local sports networks like Altitude around the country are at the dead center of a massive disruption in the economics of sports on TV.

She blames America’s gun culture for her son’s death. But the NRA may profit from a plea deal with the gun owner.

“I wasn’t anti-2A before, but now I will spend every last day of my life lending my voice to the gun control movement.”

— Regina Daly, mother of Finnegan Daly who died in 2018 after being shot while attending Colorado State University.

Regina Daly never really liked guns, but she tolerated them. Then her son, a senior at Colorado State University, died from a bullet fired from a Glock 34 semi-automatic pistol owned by his roommate. As John Frank writes, the controversial sentencing of that roommate includes a provision that will actually put money in the NRA’s pocket.

STORY: John talks to Daly about how her life was “redefined” after her son’s death and why this type of sentencing does not seem to be regular practice in Colorado.

+ BOTCHED INVESTIGATION: John Frank and Sady Swanson of The Coloradoan break down the sentencing in the case, which was reopened by a Snapchat image, including why prosecutors blasted the original Fort Collins police investigation for hampering efforts to bring stronger charges.

++ BLOOMBERG ON GUNS: Michael Bloomberg, the billionaire and now presidential candidate, unveiled his gun reform package in Aurora on Thursday — but says he’s unsure about his chances of winning a primary in Colorado. 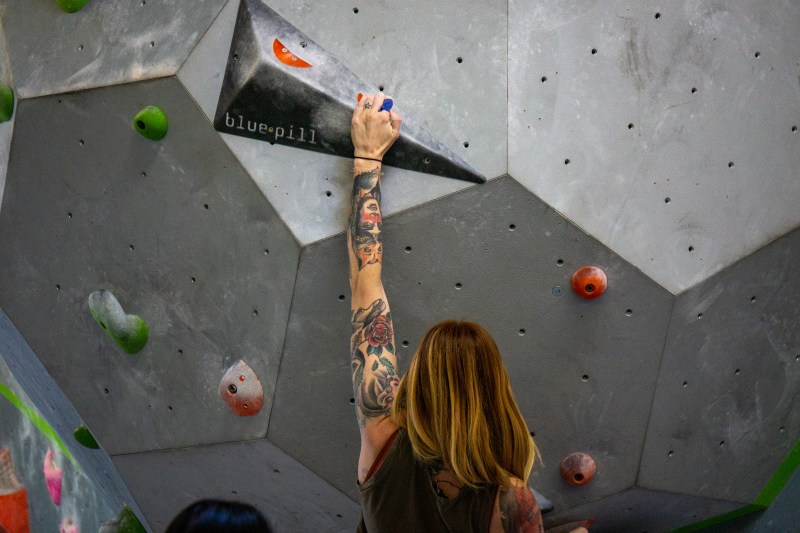 Paige Keener, of Denver, prepares to climb one of the color-coded routes at Movement Climbing + Fitness in Denver’s River North neighborhood on Dec. 3, 2019. (Eric Lubbers, The Colorado Sun)

Colorado is home to 39 indoor climbing gyms, some of which are offering extra perks from yoga to weight rooms to space for coworking. Jason Blevins writes about how the business built by bored climbers is in the midst of a hurricane of consolidation, private equity investment, mergers, acquisitions and unprecedented growth — with Colorado sitting right in the middle.

STORY AND PHOTOS: Read Jason’s breakdown of one of the biggest stories in the business of fitness.

+ A CLIMBING CAREER, NOT JUST A JOB: In the early days of rock gyms, the actual climbing routes were created by the people who owned the business, volunteers or short-term employees. But as Joe Purtell writes, the massive expansion of the industry is creating a whole new career path. (Click through for some photos of route setters at work)

The prices that insurance companies negotiate with hospitals are one of the key elements of health care costs in Colorado. A forthcoming rule to give regulators review power over those deals could catapult the relatively low-profile state commissioner of insurance into a position of major power over what hospitals charge patients in Colorado.

ANALYSIS: John Ingold explains how the rule would work, where the authority to do it comes from and what is still unknown about the process.

It’s that time of the year again, and we need your help. The Colorado Sun’s annual survey of the 2019 best beers and breweries in Colorado is live. So think about the great beers you’ve tasted this year and submit your nominations for the best beer in Colorado.

(Ed note: if you’re more of a fan of spirits, don’t miss today’s thing at the bottom of the newsletter)

// With Christmas fast approaching, thousands of Nuggets and Avalanche fans are starting to think the current contract rift that has blacked out games on television portends a holiday with nothing but coal in their stockings. Drew Litton frames the dispute, in this season of generosity, with his trademark wit.

// In “What’d I Miss?” Myra laments her exposure to the too-common practice of shaming people for the simple things they enjoy, all in the name of holier-than-thou posturing. But she gets the last laugh (and so do you).

The premise isn’t new — royalty assumes a disguise to live among common folk, romance ensues — but author Sheri Cobb South puts her own unique spin on it in her novel, “The Desperate Duke,” which was a  Colorado Authors League award-winner for Romance. Check out this excerpt, to set the scene for the fish-out-of-water narrative to follow and read our interview with South to learn how she thought she was done with some of her old characters — but learned that they weren’t done with her.

// BAD METHANE DATA: Much of the highly-touted data about methane reduction in the Front Range is based on bad data — some of which showed Denver air with less methane than the planet’s purest air — at the South Pole. CPR’s Grace Hood has the major investigation. // CPR News

// METRO DISTRICT INVESTIGATION: An investigation into metro districts — taxing authorities created by developers to finance projects by leveraging future taxes on homeowners — shows that they operate with little oversight, plentiful conflicts of interest and are leaving new homeowners reeling under growing tax bills to pay the districts’ debts. // The Denver Post 🔑

// The first of three new restrictions on food stamps by the Trump Administration will throw nearly 700,000 people nationwide off the supplemental nutrition program (in Colorado, the number will be in the hundreds). But an analysis of all three proposed rules in combination found that 3.7 million fewer people would receive food benefits and nearly 1 million students would lose access to free or reduced lunches. // CPR News, Urban Institute, NBC News

// Get ready for some transit talk, folks.

// HORSE-DRAWN PLOWS: Literally everyone who posts news to social media for a living makes mistakes. I am not about to shame someone for something I’ve done countless times. But when Fox 31’s Facebook page asked “Where were you when this huge storm came through Denver?” about the Blizzard of 1913 — 106 years ago — the comments were too funny (and not mean to the poor social media person) to not share. // r/Denver

// GOOD NEWS BEARS: A little over a year ago, we reported on the stressed-out bears seen in a federal inspection of the Denver Zoo that led to the sudden announcement that the zoo’s polar bears were leaving town. Here in late 2019, Patricia Calhoun reports that one of the bears, Lee, has not only thrived in his new home in Columbus, Ohio, he is the proud papa of a new cub born on Thanksgiving. // The Colorado Sun, Westword

// GOING UP? Denver has about 7,000 elevators in operation, and every day the city’s fire department responds to an average of eight people who get stuck in them. Have fun taking the stairs after reading this! // Denverite

// HEADLINE OF THE DAY: From our neighbors to the south: “Treasure hunter Forest Fenn sued by Colorado man claiming he was duped by treasure hunt” // Santa Fe New Mexican

Why You Might Like It: I’m not much of a drinker, but when I do, I really enjoy a good bourbon — the older the better. Colorado’s distilling scene is pretty young, so the announcement that there will be a 10-year-old bourbon made from stuff grown in Colorado is a pretty big deal. Peach Tree is throwing a party in Palisade on Saturday to launch the very limited run if you happen to be in the area, but if you’re lucky you might catch a bottle of it at your favorite liquor store and it would make a pretty good gift for a bourbon lover in your life.

SPEAKING OF GIFTS: We’re putting together a little gift guide here in the Sunriser! If you have a favorite go-to gift (local Colorado things preferred, but we’ll accept any really useful/fun suggestion) send us a note at things@coloradosun.com. Don’t wait, we’re looking to publish this guide next Friday!

OK, I have taken entirely too much of your Friday morning already, so I’m just going to ask you to help us spread the word of The Colorado Sun as you go mingle with your friends and family on this, the first big weekend of holiday parties. And it’s easy for people to get signed up for The Sunriser right on their phones. Just head to http://coloradosun.com/newsletters.

OK, go have fun, be careful hanging your lights and I’ll see you back here on Monday.