Happy bizarrely warm November Friday, folks! We had a great time with everyone who came out to meet Drew Litton and Sun staffers at the Denver Press Club on Wednesday. If you missed it, check out a timelapse of Drew drawing John Elway here and stay tuned to this very newsletter for more events like this! (If you live outside the metro area and are interested in events like this, let me know so we can start planning for 2020.)

Our next shindig is Monday’s meeting of The Colorado Sun Book Club featuring author Rory Kress, who just published an op-ed in The Washington Post that animal lovers should check out: “Finally, animal cruelty may become a federal crime. But there’s a catch.” (Look for more details about the book club event below.)

But we have so much Colorado news to get to, from battles between quarries and tourism, cars (both electric and muscle), the rising cost of college outside of tuition and a brand new mountain gondola. Intrigued yet?

Let’s ride this cable car already, shall we?

LOVE DOGS? LOVE BOOKS? The Colorado Sun Book Club convenes at 7 p.m. Monday at BookBar, 4280 Tennyson St. in Denver. We’ll have author Rory Kress on hand to talk about her investigative book, “The Doggie in the Window.” Even if you haven’t read it, you’ll want to stop by the FREE event to learn about her cross-country journey to find out more about where our furry family members come from, whether by pet shop, rescue or backyard breeder, and how the government attempts to regulate the industry. Sign up here.

Glenwood Springs is spending $1.2M in tax money on a public affairs campaign to fight a mine above town 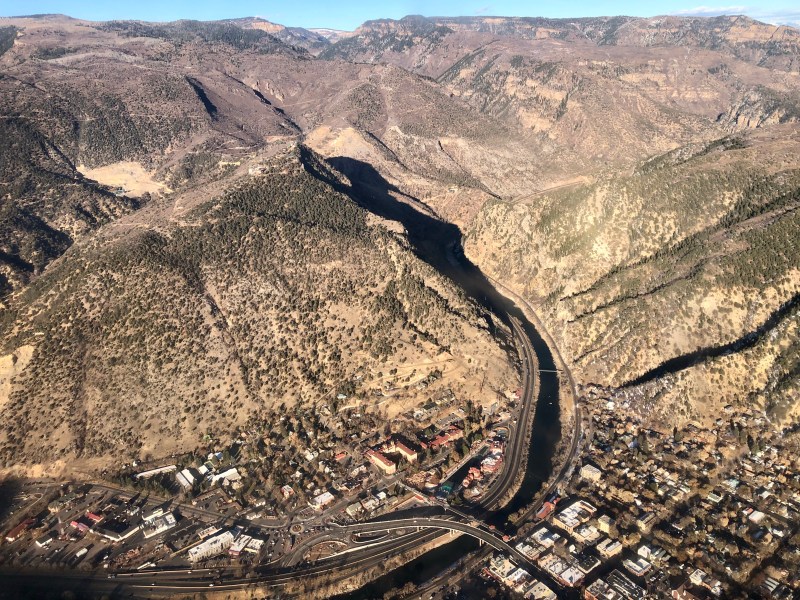 Politically connected investment firm Rocky Mountain Resources wants to grow its Mid-Continent Limestone Quarry, seen in the upper left of the photo, above Glenwood Springs from about 16 acres to 447 acres. (Jason Blevins, The Colorado Sun and EcoFlights)

For the first time in Glenwood Springs history, the city is spending is spending taxpayer money on a public-affairs campaign to battle what officials in the tourist town are calling an “existential crisis.” What’s the crisis? A major expansion of a limestone quarry right above the town’s famous hot springs.

STORY AND AERIAL PHOTOS: Jason Blevins goes deep into the unprecedented effort, including why the mine owner’s connections to the Secretary of the Interior have some crying foul.

Colorado is home to a collection of classic Shelby muscle cars. But are they just bygone relics in the Uber era? 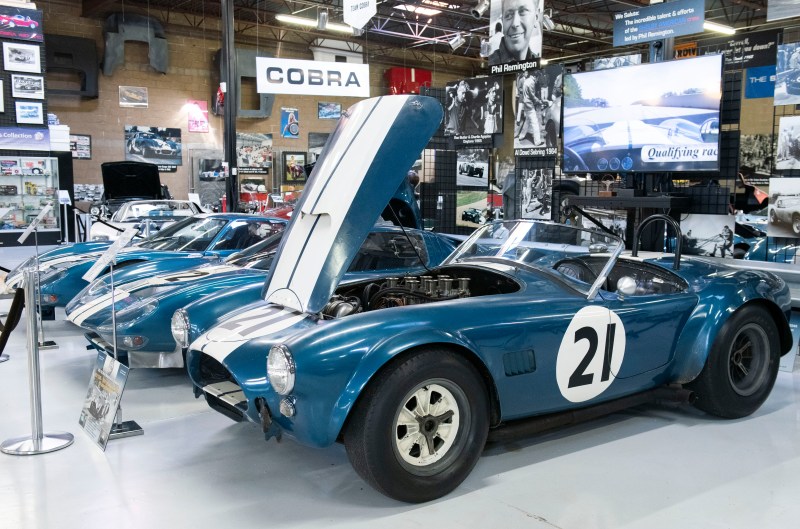 A lineup of unique vintage Shelby race cars, including the Shelby Factory Team Cobra CSX 2345 FIA Roadster at front, in the Shelby American Collection in Boulder. (Andy Colwell, Special to The Colorado Sun)

“For example, a new Toyota Camry, the most boring car you buy, is faster than a 1969 Mustang, no contest.”

— Mechanic Jason Curran, on the difference between perception and reality in the world of muscle car appreciation.

Where to begin with this great story from contributor John Bear? First there’s the Boulder museum that houses some of the legendary muscle cars remade for the screen in the film “Ford v. Ferrari.” Then there are Andy Colwell’s excellent photos of the museum. But even more intriguing, the piece has some clear-eyed thoughts from car guys who know the car culture they love is getting further from the mainstream as we approach a post-car world.

FEATURE AND PHOTOS: Rev your engines, hop into this story and prepare to reconsider the role of cars in your life.

Anyone who has gone to college — or paid for someone to go to college — in the past 15 or 20 years knows that when it comes to expenses, tuition is just one of the many things that have spiraled out of control. 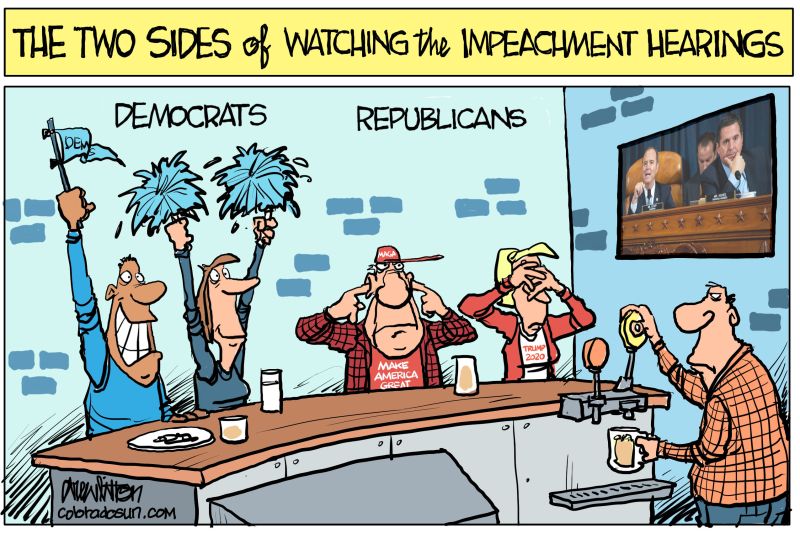 // There goes Drew Litton again, not sticking to sports — sorta. Whatever your political point of view, his take on the impeachment proceedings is bound to make you laugh in spite of yourself. Check out the bottom of this newsletter to find out how to get one of Drew’s 2020 cartoon calendars for free!

// In the latest edition of “What’d I Miss?” Ossie and Myra take on one of the stickiest situations you can find yourself in: What is your responsibility when a friend or family member says something racist/sexist/homophobic?

It’s always fun to read fiction — particularly mysteries — told from multiple points of view. That’s what Colorado author Cynthia Swanson offers in this excerpt from her second novel, “The Glass Forest.” We get a preview of her three primary characters — a career woman, a young mother and a teen girl — and just a hint of the intrigue to come. In the SunLit interview, Swanson explains how this book wasn’t quite a follow-up to her first book, “The Bookseller,” but she had some unresolved issues that needed more attention.

// It’s a salacious headline — “Police find 26 children behind false wall at Colorado Springs daycare” — but it’s hard not to see the whole situation as a direct result of the major shortage of childcare workers in Colorado. // KDVR

// Mad Max: Fury Road Interstate 70: Watch an angry Subaru Forester driver try to ram a Tesla Model X SUV on I-70 — only to be thwarted by the Tesla’s onboard cameras. // Inside EVs (h/t /r/Denver)

// While we’re talking the “Most Colorado Things Imaginable,” how about this headline? “Craig Apothecary fined and suspended for not selling enough locally-grown marijuana.” // Post-Independent

// I’m not a hunter because it never really feels like a fair fight, but I could almost be convinced to go on a hunt with an atlatl — the ancient spear-throwing tool — if it becomes legal in Colorado. // KUNC

// Aurora Central High School was given one year to increase its state ratings after a second year of low student performance. // Chalkbeat Colorado

// It’s been a rough year for West Colfax institutions. First my beloved Dino’s closed in September (RIP) and now Rockley Music Center will close after a 73-year run.  // CBS4, 9News

// After a record-breaking winter and rainy summer that effectively wiped out drought in the state, we’re already back to below-average snowpack in Colorado after a dry start to autumn. // OutThere Colorado

// Less than a week after a man was arrested for a plot to blow up a historic synagogue in Pueblo (here’s an interesting list of stuff seized at the suspect’s home), Denver police arrested a man who allegedly shouted anti-Muslim comments and pointed a gun at the Downtown Denver Islamic Center. // The Colorado Sun, Seamus Hughes on Twitter, CPR News

// Thanksgiving is around the corner, and some Coloradans still can’t access food and medical benefits from the state because of an ongoing glitch from a systems upgrade in August. // Denver7

// The Coloradoan continues its project of analyzing how other cities are dealing with homelessness. This round features a tiny home village in Austin.  // Coloradoan 🔑

// In a major victory for Denver Councilwoman Candi CdeBaca, the city will begin notifying council members of upcoming “sweeps” of homeless encampment in their districts. // Westword

// As the impeachment inquiry’s televised portion continues to suck up all the available attention in the U.S., this piece on how to treat politics as a hobby really stuck with me: “Politics is for Power, Not Consumption — Political hobbyism takes well-meaning citizens away from pursuing power.” // Boston Review

Why You Might Like It: A few months ago, Spotify started recommending some beautiful, haunting songs by a big, long-haired, mustachioed guy I’d never heard of by the name of Jim Sullivan. But all the songs seemed to come from just one album, 1969’s “U.F.O.” Little did I know about the still-unsolved mystery of how Sullivan disappeared in the desert of New Mexico on his way from California to Nashville in 1975. So this weekend give that album a listen (I recommend the title track and especially “So Natural” to get you started) and contemplate a true musical mystery.

What a week. Our stories have truly run the gamut, from affordable housing to aviation and water policy. That’s the kind of breadth you can (and should) always expect from The Colorado Sun. We consciously don’t have a paywall so that Coloradans affected by the subjects we write about can always access our content.

A big thanks to all of you who have become members in recent weeks. If you still need to join, there’s no better time than right now at cosun.co/join.

Use the discount code DREW and we’ll even send you Drew Litton’s 2020 cartoon calendar for free. If you’ve already become a member and want a calendar, persuade a friend or family member to join and borrow theirs!

As always, keep this newsletter handy and check back at coloradosun.com when you have some downtime this weekend to make sure you don’t miss any of our in-depth journalism.

See you back here on Monday.