Hello from snowy Denver on this Veterans Day morning. We have some very relevant stories both for honoring the sacrifice of military servicemen and women and for how a school district deals with snow days on a modified schedule, so we won’t waste any more time.

Let’s salt this sidewalk, shall we?

“An Evening with Drew Litton” is THIS WEDNESDAY (11/13) at 6 p.m. The longtime Colorado cartoonist will take us through the iconic images that have defined his career. His 2020 calendar will go on sale for the first time (at a discount) at the event, which is free for Sun members (search your email for “Drew Litton” to get your access code) and $10 for nonmembers. Get your tickets here.

BONUS: Become an annual Sun member at coloradosun.com/join, enter the code DREW, and we’ll send you a copy of Drew’s calendar for free!

Final duty: These Colorado veterans ensure every comrade is honored at Fort Logan 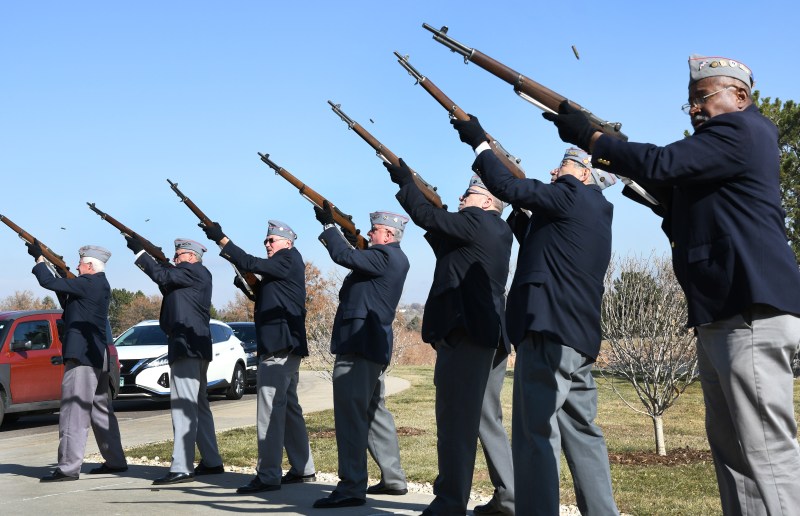 The command is given and the All Veterans Honor Guard rifle squad renders the 21-gun salute using the M-1 Garand rifle, which dates back to World War II. Members of the guard recognize one of their own, Chris “Saint” Nielsen Jr. at Fort Logan National Cemetery on Nov. 6, 2019, in Denver. (Kathryn Scott, Special to The Colorado Sun)

They looked cold, breathing mist, but many of them fought overseas, which was a lot more uncomfortable than standing for a couple of chilly hours on American soil.

Fort Logan All Veterans Honor Guard Commander Maury Smith works what can only be described as a full-time job to provide a fitting send-off for servicemen and women — up to five funerals a day at Fort Logan National Cemetery.

>> STORY: Carol McKinley explores the honor guard, the veterans who volunteer their time and what happens when the guard has to honor one of their own. 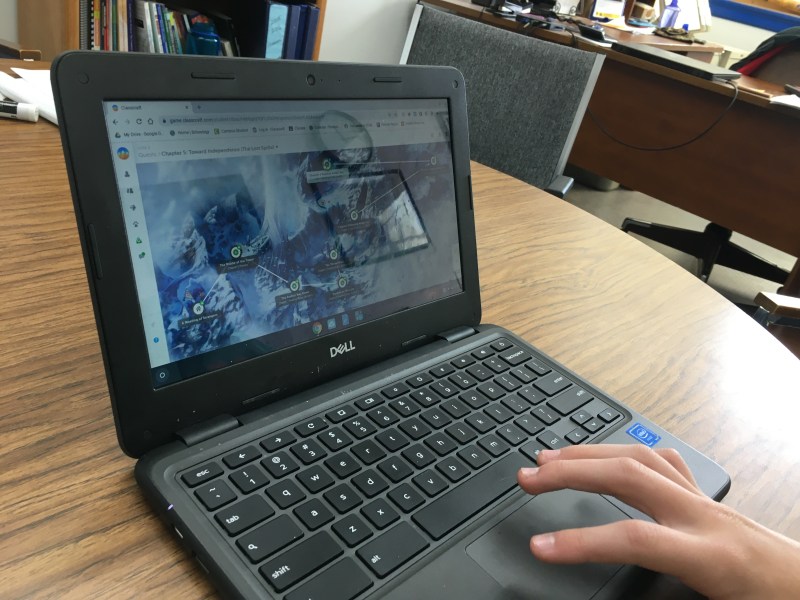 Kids may get out of school for a snow day in Cañon City, but they don’t get out of learning. The district now can convene an e-learning day, with assignments to be completed on the computers provided to students by the district. (Sue McMillin, Special to The Colorado Sun)

Cañon City Schools are not a four-day-a-week district, but they’re close. A modified schedule has kids in class for nine days over two weeks, which means that each school day is a little longer, but consequently all cushion for snow days is off the table.

>> STORY: Sue McMillin looks at how the district is testing e-learning — for every single class, including shoveling snow for gym class — to keep kids learning throughout Colorado’s unpredictable winter.

A clash over patient privacy in the context of the nation’s opioid epidemic is brewing between the Drug Enforcement Administration and Colorado’s State Board of Pharmacy. And now the DEA has filed a lawsuit against the board, the head of Colorado’s Department of Regulatory Agencies and the private company that the state pays to collect data.

>> STORY: John Ingold explains how the rare move by the DEA has drawn a line between patient information and law enforcement.

// Before we get into the news from around Colorado, here are a few very thoughtful pieces on Veterans Day.

// Speaking of drilling, Aldo Svaldi explores Colorado’s oil and gas business model — namely the practice of taking on loads of debt to expand drilling operations and spending more than they make — and why Wall Street’s hunger for surplus cash could fundamentally change this practice. // The Denver Post 🔑

// Someone is making a big push to spread the far-right newspaper The Epoch Times in Colorado. The paper was the biggest pro-Trump spender on Facebook — more than the president’s own campaign — before being banned by the social network and is operated by Chinese “spiritual group” Falun Gong (which, among other things, is behind the widely advertised Shen Yun performing arts troupe). The paper — which routinely reports debunked conspiracy theories as news — has shown up unsolicited in mailboxes in Steamboat Springs and even in the news rack at the Colorado State Capitol. // NBC News, New Yorker, Steamboat Pilot, Westword

// It’s snowmaking season in the high country. Last year, Jason Blevins explained how the resorts can manage to make snow even in the midst of drought and this year, Heather Sackett explains in interesting detail how Aspen is making sure the rivers and streams near the resort are not harmed by making snow. // The Colorado Sun, Aspen Journalism via Aspen Times

// Education Secretary Betsy DeVos, fresh off a contempt of court ruling and a $100,000 fine for collecting on loans from defunct for-profit Corinthian College, has finally announced that the department will forgive select loans for students who attended the Art Institute of Colorado after the company that ran the college folded. // AP News, CPR News

The Thing: Saving a whole lot of time using your Mac or Windows computers

Why You Might Like It: Do you still spend time hunting for applications or documents by clicking around your start menu or Launchpad? It’s time to train yourself to use keyboard shortcuts. I haven’t used the start menu, dock or Launchpad to open apps or find files for about a decade and it’s saved me so much time and frustration. On a Mac, just hit ⌘ + Space and start typing the name of app you want. On Windows 10, hit the windows key and start typing. Within a few characters, the hundreds of options in your menu will be reduced to just a few, likely the exact one you’re looking for. (Ex.: if I want to open Firefox, I just type ⌘ + Space + F and it’s the first thing on the list)

If this isn’t already a habit for you it may take a little getting used to, but once you get into a rhythm, it will literally save you hours of clicking around. If you’re really ready to get efficient, you can try a beefed-up version of this same kind of program, like my favorite program ever, Alfred for OSX.

Got a thing? If you have something that you just can’t stop raving about that you’d like to share, send us an email at things@coloradosun.com and you could be published in a future Sunriser!

Try to stay warm out there today and drive safely. Six people died in car crashes in a 12-hour span in Colorado over the weekend.

That raises the death toll on the state’s roads this year to well over 500 — a grim statistic no matter how you analyze it. We can all do our part to keep each other safe over the coming winter. 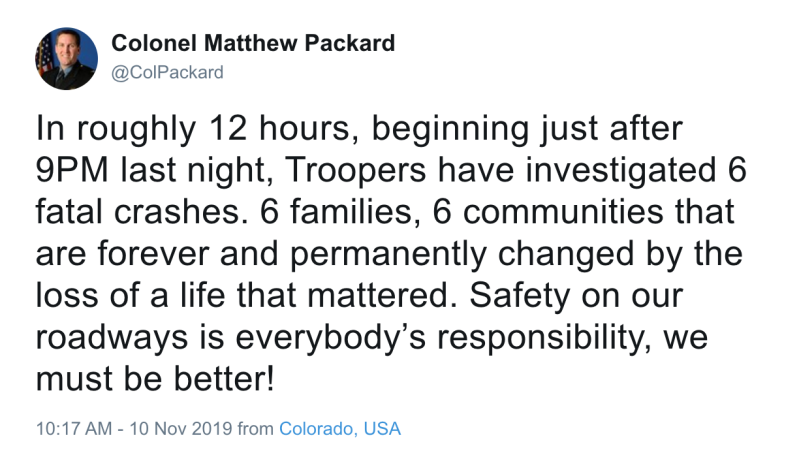 We will be back here on Wednesday with more in-depth news affecting all of Colorado. See you then.