Happy ice-cold Halloween Eve, Colorado!  Instead of telling you what you already know — it’s cold — I’m just going to ask you to a) send me your most interesting snow photo b) buckle in for an email full of news you can use (with very little of it related to snow).

Let’s wax this toboggan already, shall we? 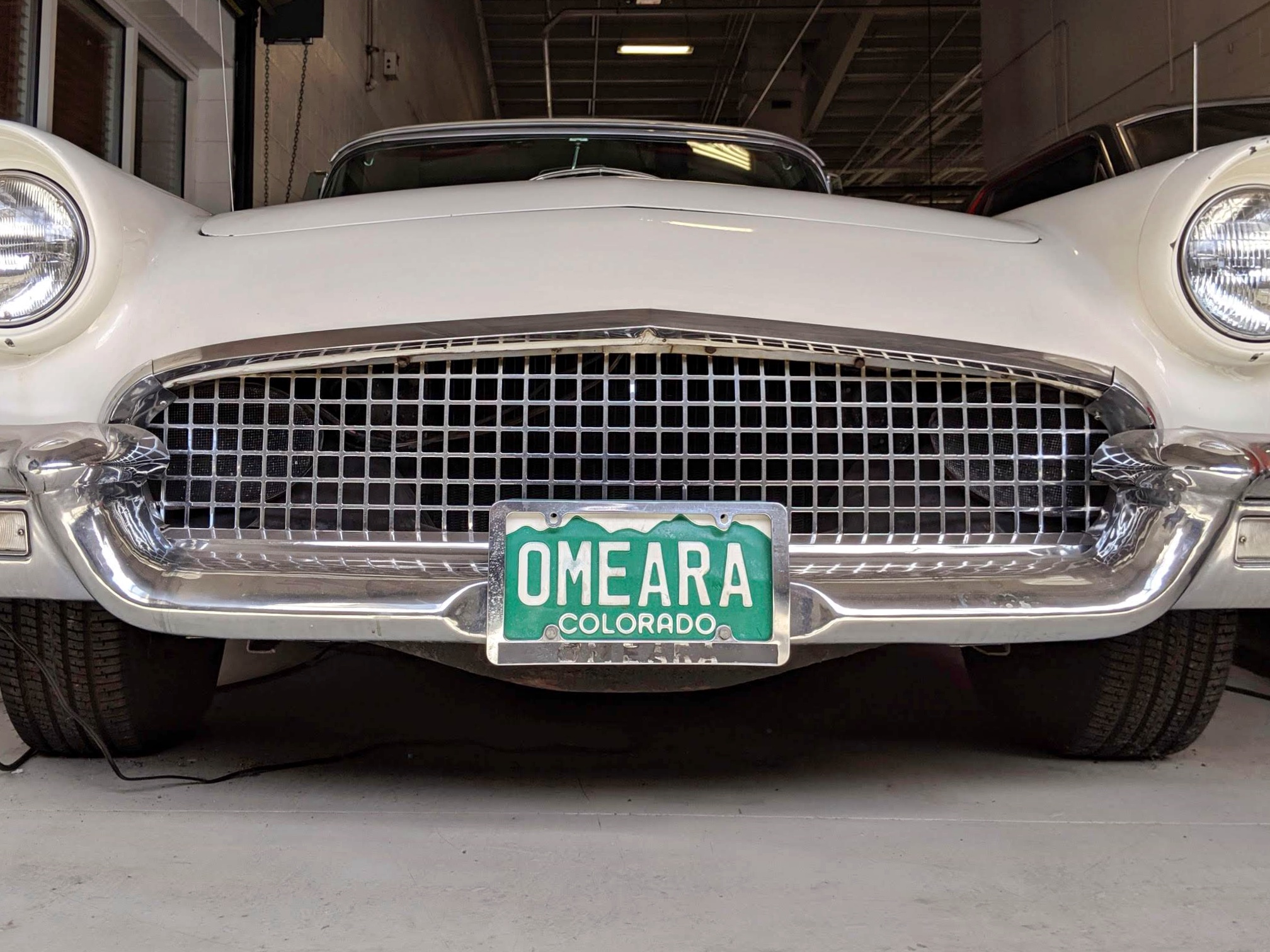 A vintage Ford, sporting the classic green mountain license plate design, being prepped for an auto show in the garage at O’Meara Ford in Northglenn on Aug. 7, 2019. (Eric Lubbers, The Colorado Sun)

Fire up the very specific nostalgia centers of your brain, folks, because there’s a good chance Colorado’s license plates could go back to the old white-letters-on-green-mountains look, which hasn’t been available since the year I got my driver’s license (2000).

>> John Frank and Jesse Paul dug into the proposed change — and what it has to do with law enforcement, toll roads and climate change.

Lawmakers are finally setting out to retool Colorado’s school funding formula. They’ll have to reach a consensus on these questions first.

“We’re all human beings – nothing is going to be the perfect school finance formula. But the changes that we’ve talked about here make a significant improvement in equity for Colorado’s public schools.”

Colorado’s school funding formula — based on factors like cost of living, student count and the number of at-risk students — has been widely criticized as inequitable and inadequate, with some advocates saying it has established a system of winning and losing districts across the state. But for the first time in years, a bipartisan group of lawmakers is preparing to finally change it.

>> Education reporter Erica Breunlin explains how the formula works now, what major questions need to be answered and how politics will — inevitably — get involved.

“This is a new human right. It’s like a new civil right.”

A huge new internet privacy law giving consumers the right to know, delete and opt-out of data collection online passed in California and kicks in on Jan. 1. Privacy advocates are cheering, but anyone who does business online in the U.S. (where you will almost certainly serve California customers) might be wondering how things are going to change.

>> Tamara Chuang breaks down the law, why backers say it’s a vital step and how Colorado businesses will need to change to avoid fines of up to $7,500 per violation.

The public comment period is over for Colorado’s proposal to create a public insurance option — including setting prices for hospitals —  and it is shaping up to be the mother of all health care battles. (? You’re going to want to read both of those links to get caught up).

Gov. Polis and state lawmakers eye changes to how police-involved deaths are investigated in Colorado

“We need to make sure that when law enforcement kills somebody that there is a process that’s transparent, that’s accountable, that people can put their faith in. Right now, I don’t think we have that.”

In the wake of a high-profile, fatal police shooting in Colorado Springs, Gov. Jared Polis and state Rep. Leslie Herod are proposing a new system to review deaths involving law enforcement. The tentative plans include the possibility of citizen review commissions — which exist in other states — or moving investigations to the attorney general.

>> Jesse Paul has more on the proposals — and why plans are already getting pushback from county sheriffs and prosecutors.

A view of the San Juan Mountains near Telluride. Much of the CORE Act is focused on public lands in southwest Colorado. (Jesse Paul, The Colorado Sun)

// Some quick (but interesting) snow-related stories:

// Castle Rock is looking to take transit into its own hands by exploring how to get its growing number of residents around town without personal vehicles.  // Castle Rock News Press

// Speaking of beer, much has been written about the opioid epidemic, especially on the Western Slope, but Mercy Hospital in Durango wants to remind us all that the “No. 1 drug of choice” is alcohol — which was associated with more than 1,000 ER visits to the hospital last year.  // Durango Herald ?

// A new law passed last year gives parolees in Colorado the right to vote, and KUNC talked to some former inmates who are excited to fill out their ballots.  // KUNC

// I do not envy county clerks who have to deal with Aurora and its overlapping, confusing jurisdictions. We reported on the 17,774 incorrect ballots sent from Adams County to Aurora residents, and now another 250 Aurora voters got the wrong ballot from Arapahoe County.  // The Colorado Sun, Sentinel Colorado

// If you finished the big opportunity zone piece I linked to on Monday and want to read more about how opportunity zones are being exploited by rich developers around the country, I’ve got one for you. ProPublica has a story about how Cleveland Cavaliers owner Dan Gilbert got some very wealthy areas of Detroit (where he owns billions in property) included in the special tax zone (designed, ostensibly, to help invigorate investment in poor areas).  // ProPublica

// A lawsuit claims that a Grand Junction fertility doctor used his own sperm to impregnate women in the late 1970s — a fact that came to light after the rise of at-home DNA testing.  // 9News

// The effects of climate change and extreme income inequality are beginning to intersect in ways that I fear are only a preview of the future. Case in point, this incredible story from Los Angeles tells the story of the landscapers and housekeepers who risked their lives to show up for work at mansions long after the residents were evacuated to escape the Getty wildfire — and no one bothered to tell them to not come.  // LA Times ?

Why You Might Like It: Pretty simple recommendation here: They are warm, tight-fitting gloves that let you use the screen on your phone without freezing your fingers off. I’ve tried several pairs of supposedly touchscreen friendly gloves, but unlike the kind that have a single little dot of conductive thread, these gloves have copper woven throughout, meaning that using your phone will feel (almost) as natural as doing it glove-free. Will they survive a trip through the backcountry? Probably not. But they are great for a frigid dog walk or while waiting outside for a bus.

I know it’s hard to imagine it now, but soon enough all of this snow will melt and it will be 70 degrees again in Colorado. So take advantage of the remaining cold and drink as many hot drinks as you can and, I don’t know, make a couple of stews.

One thing that will stay consistent is the in-depth news we produce every day at The Sun. We’re still at it, snow be damned, and I’ll see you back here on Friday to tell you all about it.

(If you haven’t already, today’s a great day to become a Colorado Sun member — it takes just $5 a month! — to help us ensure we can continue keeping you informed.)