Hello, you beautiful Coloradans. I’m back from a humid, enlightening, humid, delicious, humid and entertaining trip in New Orleans (did I mention that it was kind of humid down there on the Mississippi?).

While I was off learning about how The Sun can better fulfill the news needs of you, our community, my colleagues published a major collaboration project, celebrated our first anniversary and saw one of the largest spikes in membership we’ve seen to date. So it was a pretty good week!

I won’t talk much about NOLA here (except to thank Sunriser reader Morgan S. who suggested the trip up to Mid-City for a life-changing roast beef po’ boy at Parkway Bakery & Tavern), but it left me feeling very grateful to the community of readers and members we’ve built here together and giddy about the future of news here in our great, rarely humid state.

Let’s paddle this riverboat, shall we? 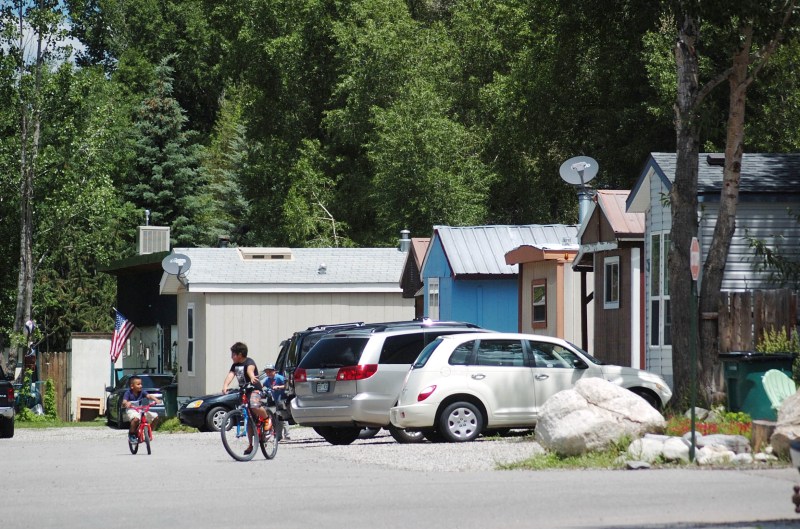 In the final dispatch from The Sun’s collaboration with more than a dozen newsrooms around Colorado, we engage in one of my favorite kinds of reporting: “solutions journalism.” In the media, we are pretty good at telling you the details of why something is bad, but we’ve historically fallen short on showing examples of how something can be fixed, or at least highlighting those that are trying.

Enter Jennifer Brown and Kevin Simpson, who looked at communities around the state that saw the writing on the wall about the forces threatening their mobile home parks … and did something about it.

>> Read about cities, counties and housing authorities who bought and manage these communities … and how others could follow their lead.

>> Catch up on the whole series (and share it with the people in your life) at coloradosun.com/parked.

California has had the ability to set stricter emissions standards than the federal government since the Obama administration granted the state a waiver. The Trump administration plans to rescind that waiver, meaning California and states including Colorado that have adopted California’s standards could be challenging that action all the way to the Supreme Court.

>> Read Jesse Paul’s breakdown of the latest volley in the battle between Trump and state governments. 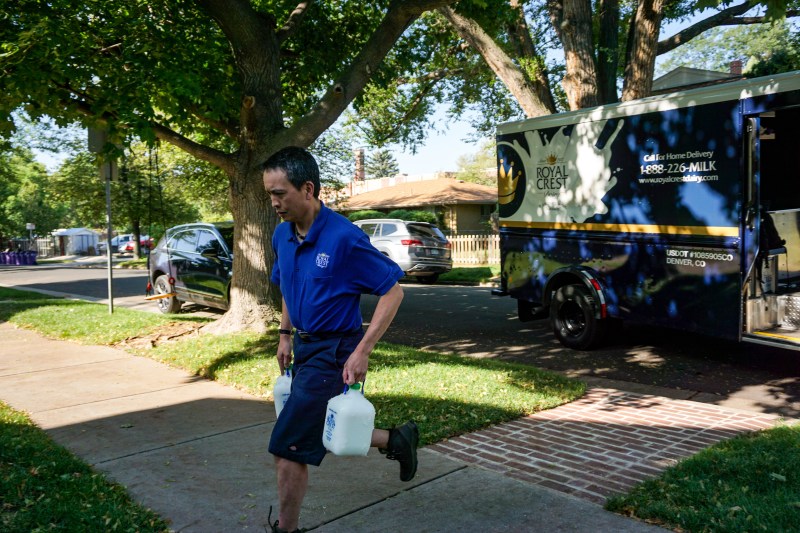 Driver John Ramos — who is a distance racer in his spare time — sprints from his milk truck to the Tartell doorstep and back in a flash. (Eric Lubbers, The Colorado Sun)

The milkman might seem like one of the most anachronistic occupations around, but for the companies that still deliver dairy on the daily directly to the doorsteps of Colorado households (yeah, they exist), the past is rapidly becoming the future. Think about it, how many flashy tech companies are built around the idea of a) delivering something to your house or b) helping you create less waste?

>> Read Jennifer Brown’s fascinating story to find out how much plastic local milk companies save and why you could soon get local soaps and other homemade products delivered next to your butter.

>> Behind the scenes: I took the photos for Jen’s story and I hope the accidental motion blur on the photos of driver John Ramos convey just how fast that man can run from his truck to a doorstep and back. 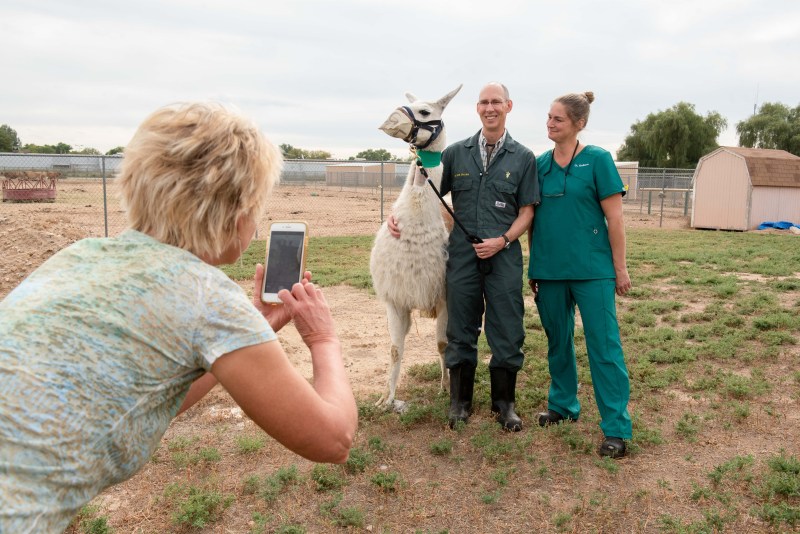 Susi Huelsmeyer-Sinay takes a photo of veterinarians Rob Callan and Jennifer Rawlinson with her llama, Lewis, just before his surgery to remove a fractured tooth at Colorado State University Veterinary Teaching Hospital in Fort Collins on Sept. 17, 2019. (Valerie Mosley, Special to the Colorado Sun)

You may remember Ike the llama (now renamed Lewis) from when he was on the run in Yellowstone National Park for three months last year. But what you might not know is that when it was time for him to deal with a toothache — the reason he darted off in the first place — there was only one place to go: Colorado State University.

>> Tamara Chuang has an engrossing look at CSU’s world-renowned veterinary hospital that has treated grizzlies, llamas, celebrity dogs and so much more. 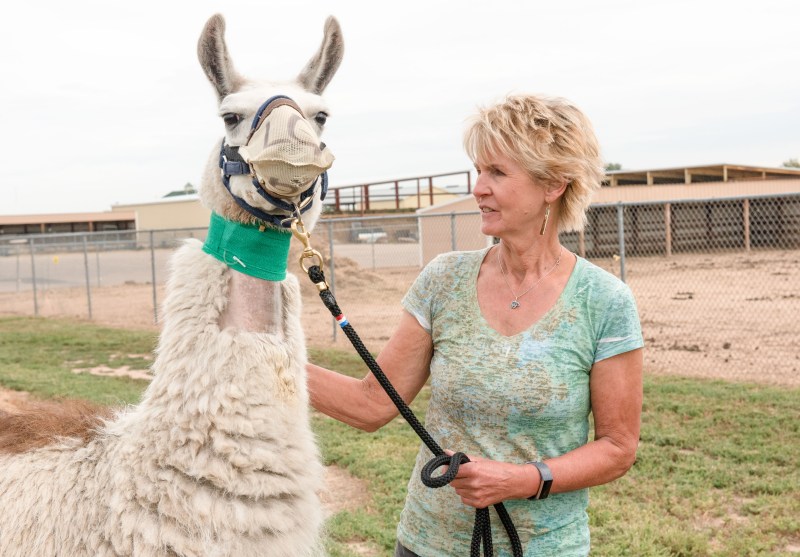 // Coming off a record year for measles cases around the country, there are about 24,000 Colorado kids back in school this fall with personal or religious exemptions from vaccinations. // Chalkbeat Colorado

// The great Chile War of 2019 rages on, with Farmington, New Mexico, challenging Ignacio to a chile cook-off that will probably make the whole Four Corners region smell amazing. Meanwhile, in the metro area, food writer Josie Sexton went looking for the (vastly superior, spicier, heartier, no I’m not biased) Pueblo chile in the metro area’s dining scene and had a hard time finding the local chile on the menu. // The Durango Herald, The Denver Post 🔑

// “Don’t be a trail troll.” That’s the short version of this article that talked to open space officials from up and down the metro area about things they wish that more trail users knew. // Colorado Community Media

// We’re officially living in a Paul Verhoeven movie. This headline would be perfectly at home in “RoboCop” or “Total Recall”: “Roy Orbison And Buddy Holly Hologram Concert Coming To Colorado.” // CBS4

// The 3,000 or so Colorado Kaiser workers are planning to strike for a lot of the same reasons that teachers in Denver walked out earlier this year, according to this article from CPR: salaries not keeping up with Colorado’s cost of living and layoffs creating labor shortages impacting patient care. // CPR News

// A tale of two headlines on the same subject: “RTD board rejects plan to sublease land for National Medal of Honor Museum” vs. “Update on the big, dumb gravel pit at Colfax and Broadway: It’s still a gravel pit” // 9News, Denverite 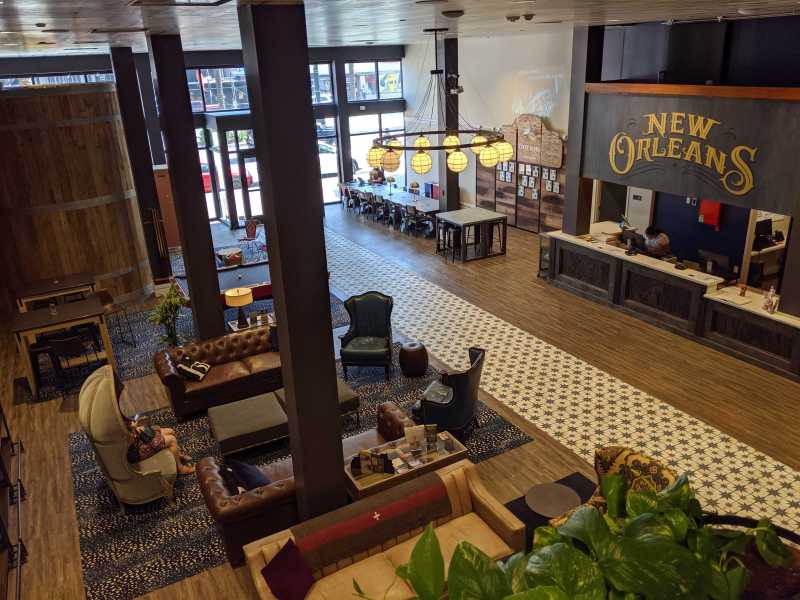 Why You Might Like It: I spent my 20s working on a journalist salary — that is to say, enough to make a living, not enough to do a lot of fun stuff without going into debt — which meant that I didn’t do much traveling. If only my younger self would have known about Hostel International (and other like-minded hostel organizations)! HI is a nonprofit aimed at making travel more accessible (read: cheap) while encouraging travelers to gain a “greater understanding” of the world. And I can say that paying $180 to stay for four nights right on Canal Street in New Orleans felt like an absolute steal. It’s definitely not a hotel, but I met travelers of all ages from all over the country, had a comfortable place to sleep, a continental breakfast (with chicory coffee) and (abundant, clean and private) bathrooms. If you’re traveling solo, as a couple or a small group, don’t overlook them. I can’t wait to get out to as many of these locations as possible over the next few years.

I’d bet you have a thing! Send us an email at things@coloradosun.com and you could be published in a future Sunriser!

Thanks for getting to the bottom of another Sunriser with me! I really did miss talking about the news with you all.

As always, your support via membership (you can still get in on our anniversary deal at coloradosun.com/join for one more day if you aren’t one already) and by sharing the stories you read with your friends and family truly is one of the most important ways that we can guarantee the future of in-depth journalism in Colorado.

And don’t forget to get them over to coloradosun.com/newsletters to get them hooked on The Sunriser!

Have a fantastic day and I’ll see you right back here on Friday.