Good morning and happy Monday (if that’s not too harsh of an oxymoron for you). The calendar might be saying “school is just around the corner,” but weather systems don’t care.

My brother, Luke, sent me this photo yesterday afternoon of a tornado just west of Yuma (storm chaser Reed Timmer got one from the same cell on video), which is a reminder that summer thunderstorms don’t really care what your weekend plans are. 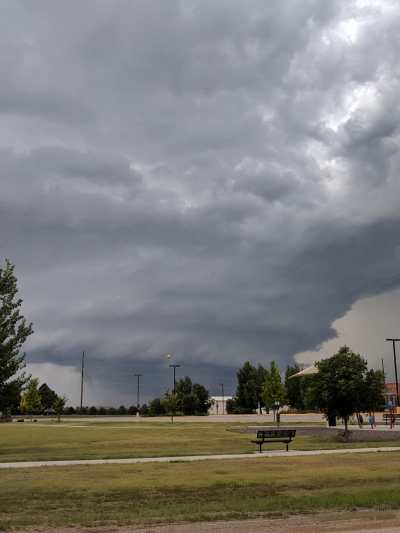 With that weather behind us, let’s look ahead to a newsletter full of stories about the intersection of climate change and family business, a curious set of tax breaks and more.

Let’s chase this twister already, shall we?

The Sun is going to print! To help make our first hard copy special, we’re looking for Colorado organizations and businesses who want to support local journalism by underwriting this printing. Spots are available for only a few more days, so hit us up at underwriting@coloradosun.com for rates and availability. 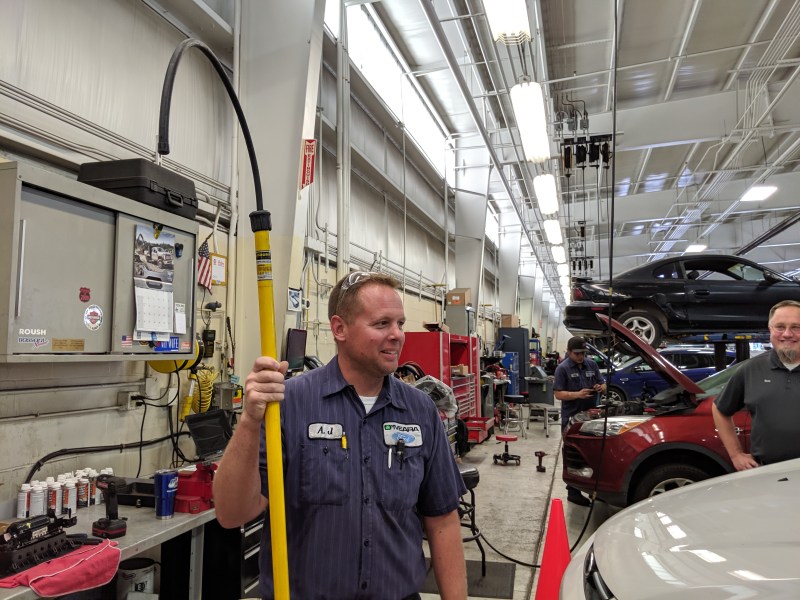 A.J. Peterson holds what techs call the “meat hook” — a standard issue piece of equipment used to safely remove a person who has come into contact with electric current while working on a hybrid or electric car in the shop. (Eric Lubbers, The Colorado Sun)

Lowering emissions is a top priority in Colorado, and getting more electric vehicles on the road is a big part of that plan. But dealerships are pushing back against a mandate to sell more electric vehicles — which require half or even one-third of the maintenance of a gas car — saying that it threatens their business model and puts customers at risk if a dealer-free company like Tesla goes belly-up.

A tiny garden in Boulder is showing signs of stress from smog. The scientist behind it is thrilled. 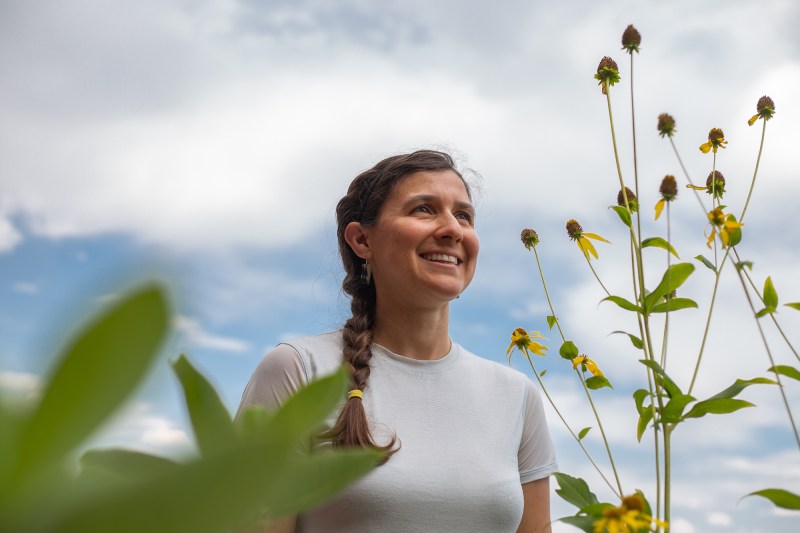 Danica Lombardozzi started her ozone garden as a personal project and in the past seven years that project has proved to be crucial in understanding the effects of the powerful greenhouse gas on different plant species along the Front Range. (Nina Riggio, Special to The Colorado Sun)

The effect of three little oxygen atoms chained together — aka ozone — can be devastating for plant life when it’s here on ground level. Ground-level ozone is one of six main air pollutants monitored by the Environmental Protection Agency, but it’s hard to see the direct effects without scientific equipment. Enter the “ozone garden,” planted near the front door of the National Center for Atmospheric Research in Boulder. It’s one of a handful of ozone monitoring stations nationwide network that, among other things, provides a visual representation of what ozone exposure can do to plants.

$950 given to Walgreens. $529 for McDonald’s. Just shy of $20,000 for the Rockies. Those numbers are small in the grand scheme of tax credits, but the small(ish) tax credits handed out under the Enterprise Zone program in Colorado have added up to hundreds of millions of dollars of lost revenue for the state, with beneficiaries including some of the world’s largest and most profitable corporations.

>> Read Brian Eason’s investigation into this program and the lawsuits and legislation that could be targeting it soon. 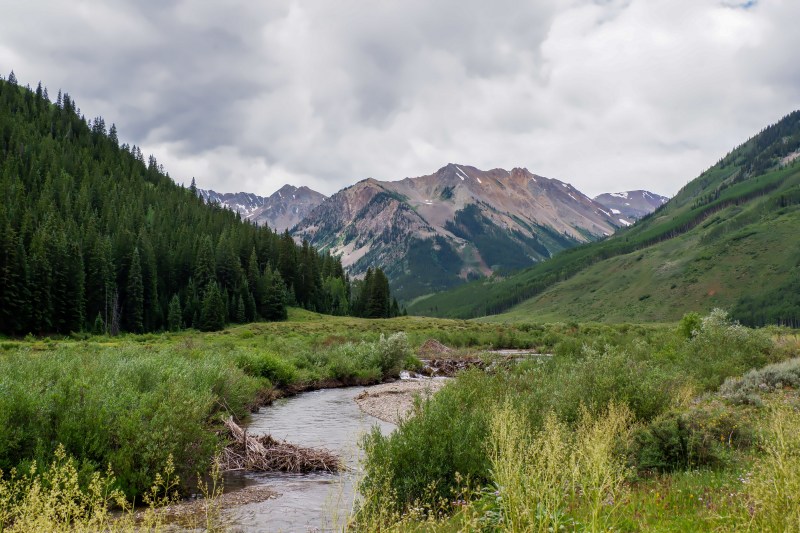 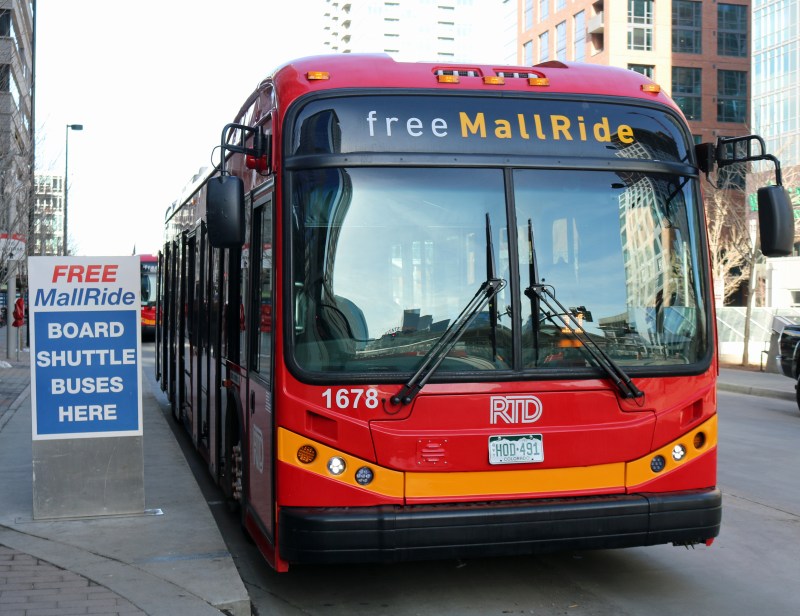 One of the most popular forms of public transportation in Colorado is the 16th Street MallRide. Sure, location has something to do with that, but there are two other factors: It runs frequently, and it’s free to ride. It’s literally the photo on the Wikipedia entry for “Free public transport.”

When I saw this story from our westerly neighbors — “By 3-1 margin, Salt Lake City residents favor converting to a free bus system” — it got me thinking: What if we just made RTD free to ride … everywhere?

It sounds a little crazy, but when you look at the numbers, it’s far from unthinkable.  In 2017, fares from riders made up only about 25% of RTD’s total operating costs (look at page 106 here), with the rest picked up via tax revenues and grants.

If RTD eliminated all fares, some back-of-the-napkin math shows that the lost revenue could be shouldered by every person in the Denver metro area over 18 and under 65 for a grand total of … about $6.67 per month. And for less than the cost of a ticket on the airport train, thousands of commuters who would normally drive may actually consider getting off our crowded highways and hopping on a bus.

That is, obviously, a vastly oversimplified way of looking at it. There would be higher operating costs if ridership increased, and it’s not like many people find the current bus/light rail/train service conveniently connects them to where they actually need to be, so there would need to be more routes run more frequently, increasing costs.

But if we’re serious about fixing traffic and cutting emissions we have to stop waiting for a cultural shift and start building systems that will get three of our state’s biggest constituencies (the lazy, the cheap and the busy, all three of which I belong to) to change their habits.What’s your take? How badly is my math off? Send me an email, and I’ll share a few responses here later this week.

// Encrypting police scanner radio is not popular among residents or journalists, and a 12-hour span in Denver last week that saw four shootings leave three people dead — marked only by a few tweets from Denver Police — is a prime example of what a metro area loses when it can’t keep an ear on law enforcement. // 9News

// “They found my car? In a lake?” I can’t seem to summarize this excellent story from David Gilbert effectively, so just trust me and go read it yourself. // The Littleton Independent

// A bear, having already broken into an Estes Park home, made its escape through a wall “like the Kool-Aid man.” // CBS4

// National headlines were focused on an ICE raid of a chicken plant in Mississippi (which was the subject of years of complaints over labor violations and sexual harassment), but ICE also conducted operations in Granby last week.

This comes as ICE is defending the treatment of detainees at the GEO Group-operated detention center in Aurora and at least one Denver resident is “self-deporting” after being denied a visa renewal. // ABC News, New York Times, Post Independent, CPR News, The Denver Post 🔑

// Wildfire-fighting helicopters usually have to be grounded at night. But a new round of training during a relatively quiet season could keep choppers working into the night. // CPR News

// “So many kids getting hurt”: Sexual abuse and neglect was ignored in Montezuma County, according to a new report. // The Denver Post 🔑

// R. Alan Brooks, who counts his weekly strip “What’d I Miss?” in The Colorado Sun among his many artistic accomplishments, talks about creating art in evil times in a fascinating Q&A this week. // Westword

A copy of Denver author Peter Heller’s “The River,” photographed at Cheesman Park in Denver on May 26, 2019. (Eric Lubbers, The Colorado Sun)

The Thing: “The River” by Peter Heller (Tattered Cover, BookBar or go pick it up at your local bookstore or library)

Why You Might Like It: If you read our SunLit summer reading recommendation list, this thing won’t be a surprise to you. But I tend to read fiction in short, powerful bursts separated by months, so I finally finished the last third of Denver author Peter Heller’s suspenseful masterpiece this weekend, and I’m just wondering what took me so long. To try to summarize it would do it a disservice, but I can say it got my pulse up more than once, which is something that doesn’t happen with new fiction often. Go find yourself a copy and get ready for a wild ride.

What’s your thing? Send your favorite thing and a bit about why you love it to things@coloradosun.com and we could share it in The Sunriser!

That’s it for today!

Make sure you don’t miss the opportunity to be a part of our first-ever print magazine coming out soon, in conjunction with our big blowout one-year anniversary party on Sept. 5. More details on that will be released later this week, but it’s going to be in downtown Denver and it’s going to be awesome.

You won’t want to miss out.

See you Wednesday with more important journalism to share!