Sunriser: Living with grizzlies, wolves and bison / A 6,000-foot “plunge” coming to Colorado / Politics and beer / “Polis pennies” / So much more

Good morning and happy Friday! It’s been a stunningly long week for just about everyone, so I want to congratulate you for making it to the end — and hopefully into some great weekend plans.

Before we dive into the grizzlies and wolves and bike trails and beer (oh my!) we have for you in today’s newsletter, I want to remind folks that The Sun is getting its very first print magazine next month!

To help make our first hard copy special, we’re looking for Colorado organizations and businesses who want to support local journalism by underwriting this printing. Spots are available for only a few more days, so hit us up at underwriting@coloradosun.com for rates and availability.

Let’s take this plunge, shall we?

Could Colorado see the return of grizzlies, wolves and wild bison? Here’s how Montanans coexist with them. 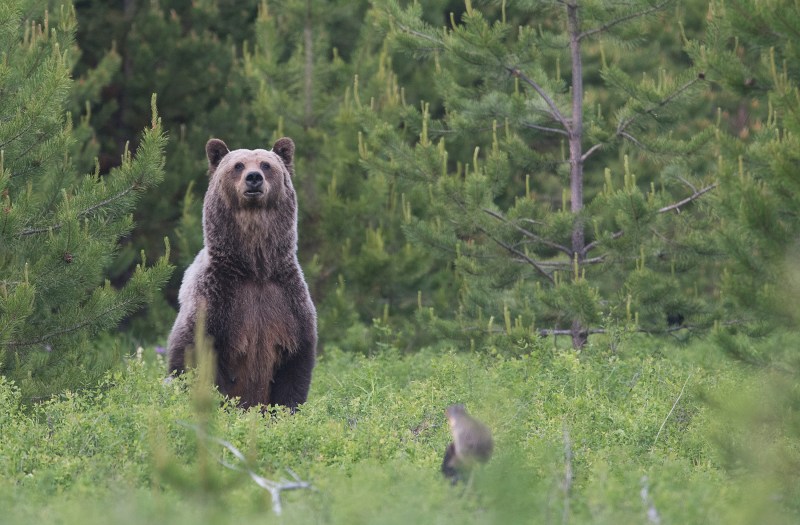 A grizzly bear stands on its hind legs in the woods in northwest Montana. (Chris Peterson, Hungry Horse News)

From a lawsuit demanding the study of bringing grizzlies back to Colorado to the petition to let voters decide on bringing wolves back to the surprising rebound of the state’s bison, there’s a lot of talk about Colorado’s relationship to its animals. Reporter (and Montana native) Jennifer Brown traveled north to look at how residents of a state with all three species roaming wild have learned to coexist.

The Palisade Plunge (and its 6,000-foot descent) will be one of Colorado’s crown jewels 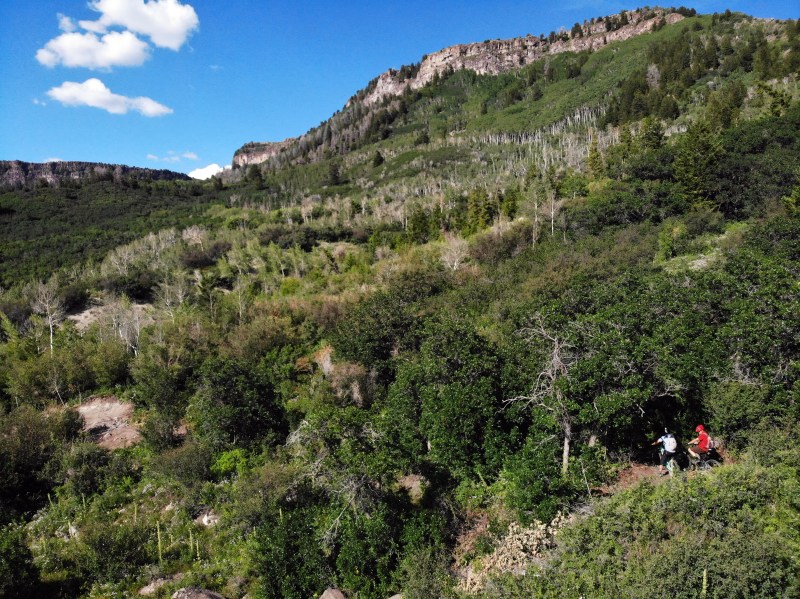 Riders navigate a recently constructed portion of the Palisade Plunge Trail, a 34-mile descent that will connect the Grand Mesa Plateau southeast of Grand Junction with the Colorado River in Palisade. (William Woody, Special to The Colorado Sun)

Thirty-four miles of trails, including stretches of freshly constructed single-track. 6,000 feet of vertical descent from the Grand Mesa Plateau to the Colorado River in Palisade. Jason Blevins has the details of what will undoubtedly be one of the premier mountain bike trails in the country — and the diverse group of partners it took to make it a reality.

If Colorado wants to stop the next school shooting, the state needs to get on the same page, lawmakers say

“It is possible to prevent kids from dying by violence in school.”

The chairwoman of the school safety committee set up in the legislature after the STEM School shooting that left a student dead in May has reached some conclusions after a summer of research. John Frank breaks down the gaps that she and other lawmakers have identified and what kind of legislation might be on the table for next session.

“We are going to lose some people that we don’t share an ideology with anyway, and that’s the beauty of this industry and there are many other breweries they can support if they want to, and I’m not going to take offense to it.”

More and more consumers are looking at how they spend their money as inseparable from their politics (see the recent controversy over Soulcycle). And that street goes both ways in Colorado’s diverse craft beer scene, with breweries increasingly adding a dash of politics to their recipes. 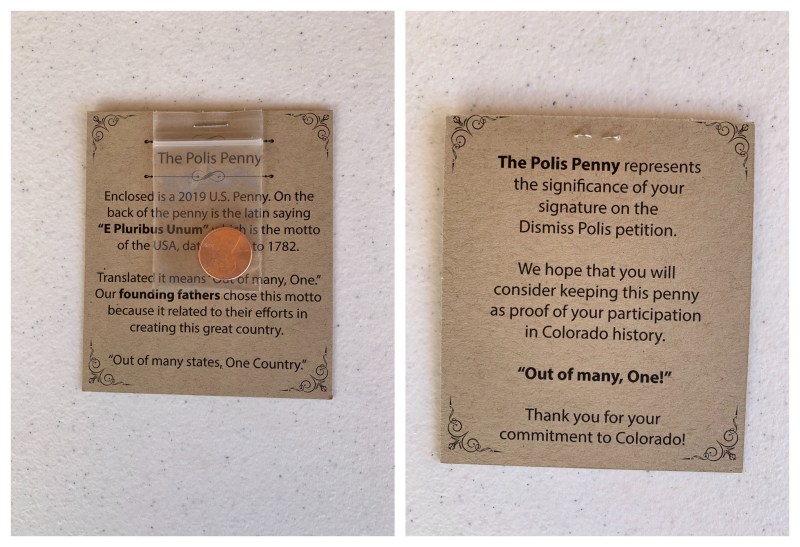 A photo of the “Polis Penny,” given to people who donate $20 to the recall effort as a way to stay under the $20 limit for campaign finance reporting laws. (Sandra Fish, Special to The Colorado Sun)

Give the Colorado Sun a follow on Instagram to see more of our photos from across the state. 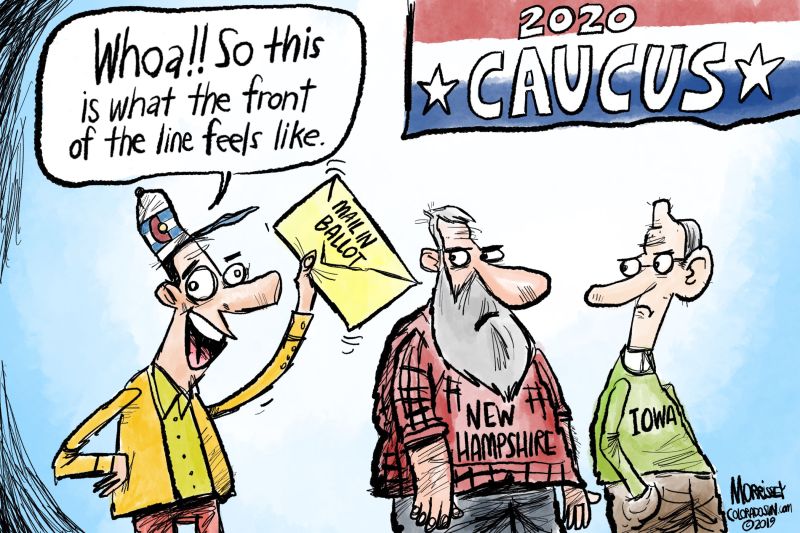 Author Elisabeth Hyde did something cool with her excerpt from her novel “Go Ask Fanny.” While most of the story takes place in 2016, she drops us into a 1984 flashback that reveals the roots of family dynamics forged during a difficult political campaign. It’s a compelling multiple-character study that inspires curiosity about how these siblings turned out as adults. And in her SunLit author interview, Hyde reveals the inspiration for the novel and the difficulty of writing stories within the story — as well as how she was able to revisit her own experience on the campaign trail.

Wiley Roots Brewing in Greeley is capturing the flavors of summer in beer. The brewery’s popular Slush series of kettle sours are tart, fruit-forward and low-alcohol — making them super quenching on hot days. The Cherry Limeade, Mojito and Rose are some of the latest options. The brewery even recently released a packaged beer slushy.

“What a wonderful way to streamline government and do what we haven’t been able to do for a long time.”

— White House Chief of Staff Mick Mulvaney, in reference to the federal government’s decision to move the offices of the USDA from D.C. to Kansas City

// A persistent criticism of the decision to move the headquarters of the Bureau of Land Management to Grand Junction was that it was an effort to weaken the bureau by disrupting the lives of experienced government workers. The Trump administration (and Sen. Cory Gardner) have maintained that the decision is about getting decision-makers closer to the land they manage. But Trump’s Chief of Staff Mick Mulvaney had a different take when he got candid about a similar move for the USDA at a party, complaining that it’s “nearly impossible” to fire federal workers, but that “half the people quit” when you move offices.  // The Colorado Sun, Government Executive

// Colorado’s red flag law — which doesn’t even go into effect until Jan. 1 — is already being touted by lawmakers as “the Colorado model” for similar laws in states like Wisconsin. // WKOW

// Here’s a chilling reminder of just how devastating the combination of dirt and water can be in large enough quantities. // Glenwood Post-Independent

// Mike Coffman is not wasting any time in his campaign to be Aurora’s mayor, raising a record-breaking $439,640 at the first campaign finance reporting deadline. // Aurora Sentinel

// The number of people experiencing homelessness in metro Denver has grown by more than 400, according to the annual point-in-time survey taken in late January every year. // Westword

// Highlands Ranch is prominently featured on the next cover of TIME magazine, which includes an illustration with the names of all 253 towns and cities that have experienced a shooting in which at least four people other than the shooter were injured or killed in 2019. // TIME

// The city of Denver, just after nixing eight-digit contracts with the nation’s two largest private prison companies, has reached a short-term verbal agreement with the companies to continue to operate the halfway houses in the city while a transition plan is arranged. // The Intercept, The Denver Post 🔑

// I know nothing about guitars or guitar playing, but I really enjoyed this look at Gunnison luthier Kent Viles, inventor of the “Dobrato” — an instrument played by members of Phish, Jason Isbell and ZZ Top’s Billy Gibbons. // Out There Colorado

// I was hit with a near-incapacitating bolt of nostalgia about halfway through David Sachs’ recounting of short-lived pro sports teams in Denver. Specifically when I saw the logo for the Denver Daredevils, the incredibly short-lived professional roller hockey team that I someow saw live as a sixth grader and then promptly forgot about for 25 years (make sure you get a look at those Caribous of Colorado NASL jerseys, too). // Denverite

Punk rock died when the first kid said
“Punk’s not dead, punk’s not dead”
You know Louisville is death, we’ve got to up and move
Because the dead do not improve

Why You Might Like It: It’s been a tough week for people who knew how to wring beauty from the English language. First, we lost Toni Morrison, who may yet turn out to be the most influential American writer of the modern age (as the people most affected by her work mature into their own careers). Then on Wednesday, David Berman of the Silver Jews (and my favorite poet) died at the age of 52. His country/folk/rock songs aren’t for everyone — he described himself as a terrible singer, often — but the humor, pain and sublime beauty he was able to conjure with just a few familiar words is something that has stuck with me since I first heard them. The song “Tennessee” is, at its most basic, a riff on a cheesy pick-up line, but right in the middle contains a few of the most powerful lines about aging and death I’ve ever heard, followed just a few bars later by a joke about Volunteers football. (If you’re not somewhere you can listen to music, you can read his poem “Imagining Defeat”).

I know today’s thing was a little bit of a downer, but I prefer to see it as a reminder to not waste a minute of the short time we all have. So get out there and have an absolutely phenomenal weekend, and we’ll see you back here for more Colorado news and discussion on Monday!

Demand for pandemic rental assistance in Colorado jumped 33% in November

Housing officials credit public awareness for renters and landlords who may qualify for 15 months of rent help; a separate mortgage program made four payments in its first month.

As Xcel maps its “power pathway,” how close is too close to the Sand Creek Massacre National Historic Site?

Colorado Secretary of State Jena Griswold has requested about $200,000 annually from the legislature for guards and a threat monitoring

Littwin: Whatever else might be different about the Oxford High shooting, the reaction is always the same

This time, with so many red flags in evidence, the parents and the school are getting intense scrutiny. So is the Supreme Court. But once again, Congress will do nothing.