But if that stuff bores you, we’ve got a story below about drunk mice — yes, seriously — and a change in driving-under-the-influence blood testing that’s creating a long list of butterfly-effect problems. So really, there’s something for everyone today.

Let’s glaze this doughnut already, shall we?

Is higher education still worth it? A Colorado report shows the value is clearer for some degrees over others.

“These are the choices that individuals make — and some of them, unfortunately, really have to struggle with.”

— Angie Paccione, head of the Colorado Department of Higher Education

The Colorado Department of Higher Education had a question: Given the rising costs of tuition, is a college degree still worth it in the long run? The answer from a new report is “yes, but…”

>> DEGREES IN NURSING, PLUMBING A SAFER BET THAN TEACHING Brian Eason breaks down the heavy numbers in the report, including where the report is missing crucial data.

You’re going to want to read the whole story, but you absolutely cannot miss the section on teaching. Fewer students are choosing education degrees because they worry they won’t ever be able to pay off loans, draining the already shrinking pool of potential teachers (which is a good reminder that not all jobs that contribute value to society can be measured in dollars earned).

Alcoholism is a particularly human condition with a constellation of causes that have been resistant to study and treatment. But researchers at the University of Colorado are using two groups of mice to try to figure out the genetic factor of alcohol addiction.

>> FROM MICE TO BETTER TREATMENTS Jennifer Brown looks at the complexities of alcohol abuse and how this small study hopes to lead to more effective treatments in humans.

Colorado’s reinsurance program is the biggest thing to happen to health care in the state in years. It might not last.

Sometime today, Colorado is expected to announce that its innovative reinsurance program received approval from the Trump administration, ushering in a dramatic drop in health insurance premiums in the state next year. But as John Ingold writes, that same administration is currently backing a lawsuit to strike down the entire Affordable Care Act — the law that makes most of the funding for the reinsurance program possible.

>> CONFUSED? LET US EXPLAIN. John Ingold’s story tells you what reinsurance is, why it will save people money, and how the administration’s actions could torpedo the entire effort. This is essential reading if you have insurance in Colorado (aka, pretty much all of you reading this).

Michael Bennet has a warning for Democrats. But it’s not clear how many are listening. 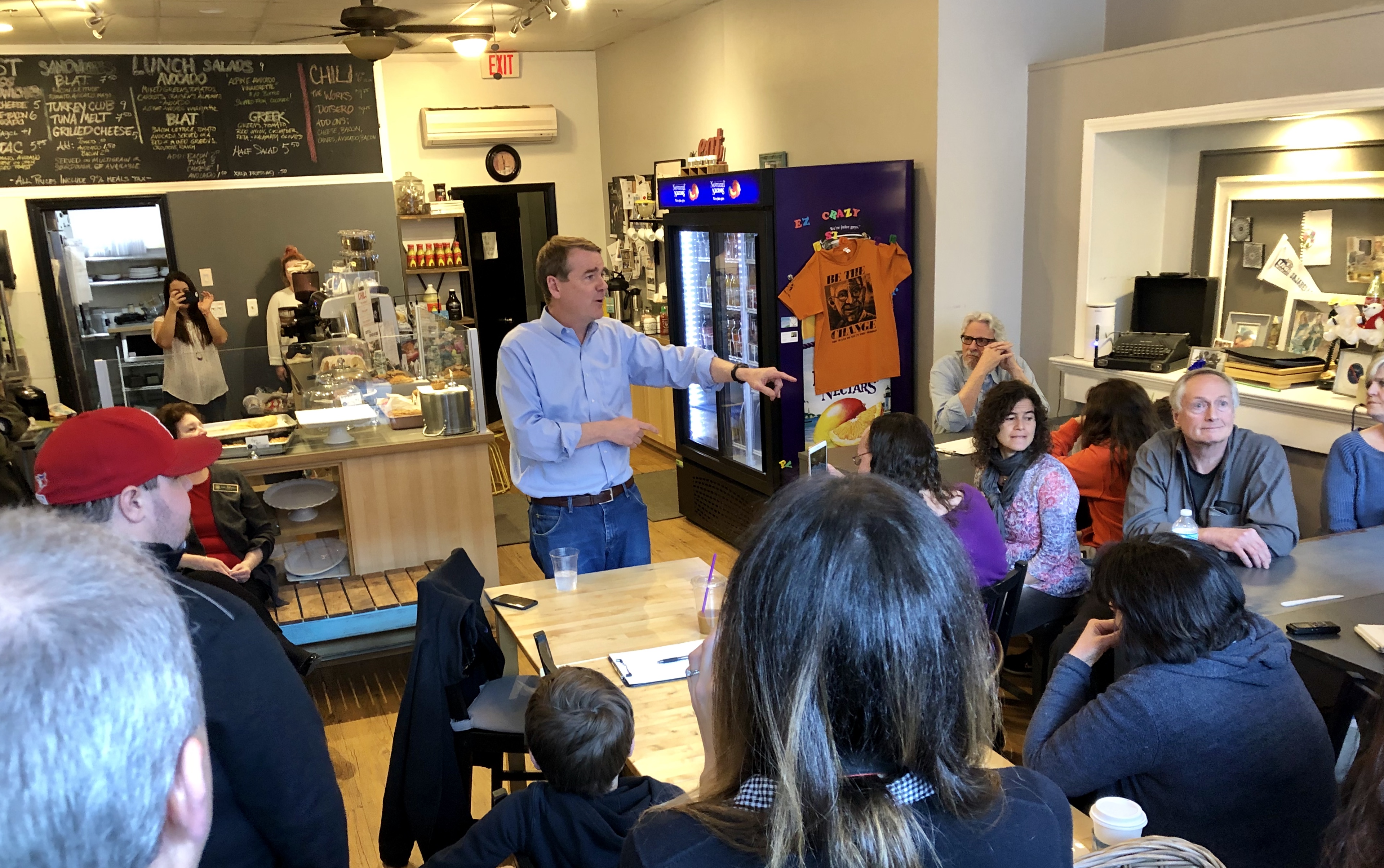 After John Hickenlooper’s mostly invisible performance in last night’s debate, the pressure is on the other Colorado candidate to state his case for moderate, practical, idealistic governance and make some headway in the second night of the debate.

>> WHY THE SENATOR IS STILL FIGHTING Bennet is still holding out hope for a breakout performance to keep his candidacy alive. John Frank has spent the summer exploring Bennet’s motivations, ideas and new book on the Senate to create a portrait of a true believer looking for his message to land. Make sure to tuck into this one before tonight’s debate.

— John Camper, who leads the Colorado Bureau of Investigation

Your business can get in front of the most engaged readership in the state. Email underwriting@coloradosun.com for information on how to sponsor a Colorado Sun newsletter.

// The immigration story isn’t going away. Last week, two U.S. citizens were detained by U.S. Customs and Border Patrol — one 19-year-old citizen headed to a soccer match in Texas was arrested and held for 23 days without a shower because officials “didn’t believe” his valid documentation, and officials apprehended a 9-year-old girl (also a citizen) on her way to school and held her for two days. // Dallas Morning News, HuffPost

// $50 million and several lawsuits later, residents around Peterson Air Force Base are still paying the costs to clean up the toxic firefighting foam that leached into groundwater and soil. // CPR News

// It’s always a treat to read Ted Conover’s writing about Colorado. In Harper’s, Conover goes deep into the remote San Luis Valley to explore the new population of people trying to live as far from modern society as possible. // Harper’s

// After a social media post showing his dog killing a fawn in the San Luis Valley, a New Mexico man could get a big fine and lose his hunting and fishing privileges. // Vail Daily

// The public can no longer listen to the Denver Police Department scanner. Jeremy Jojola gets into why that is a big problem for police transparency and local journalism (there was even a bit of a Twitter spat between a Denverite reporter and the official police account over this encryption last night). // 9News

// County fair season is here and a virus affecting horses and other livestock has 70 locations around the state under quarantine. // Coloradoan

// I’m getting really sick of reading about potentially deadly wire traps set in Colorado’s wilderness. The latest is a head-height wire strung across a trail near Rampart. // OutThere Colorado

// I’ve heard of altitude affecting baking, hiking and professional basketball, but I never imagined that drag racers would have to bring separate engine parts just for racing at Bandimere Speedway. // Stats By Lopez, Colorado Community Media

The Thing: Bundyville, a podcast about armed, anti-government uprisings in the West. (Subscribe links)

Why You Might Like It: This summer, I’ve tried to drive less, take my dog on longer walks and spend more time each week working out, which combined to drastically increase my potential Podcast Time™. I’m a comedy podcast diehard (what’s up fellow MaxFunsters) but lately the most intriguing listens have been investigative miniseries that allow for a more detailed and nuanced look at a complex situation.

I’m three episodes into Bundyville, a very good exploration of the ideological (and sometimes literal) war being waged against the U.S. government by sovereign citizens and Western landowners (remember when an armed militia occupied a wildlife refuge in Oregon for nearly a month?).

If you live in Colorado, you’re smack in the middle of this battle whether you know it or not (it wasn’t that long ago that a group of sovereign citizens was prosecuted for threatening Boulder lawyers, judges and law enforcement), and this is an engrossing way to catch up.What’s your thing? Send us an email at things@coloradosun.com and you could be published in a future Sunriser!

Thanks for getting to the bottom of the newsletter!

A headline (“New bill would ban autoplay videos and endless scrolling”) came across my feed and I felt a little pang of pride. Of all the terrible online experiences listed in the proposed bill, coloradosun.com has none of them. No autoplay, no heavy, flashing ads, no infinite scrolling or “one weird trick” suggested stories. (We do have a pop-up asking people to sign up for this newsletter, but pro tip: Log in to your account by clicking the Sun logo in the bottom-right corner and you’ll never see it again!)

This user experience is only made possible by the support of our readers. We’re beholden to you, not corporate owners or click-chasing, and it helps us bring the kind of impactful, meaningful journalism you’ve come to expect from us.

So if you’re not already, consider joining The Colorado Sun right now at coloradosun.com/join. It’s fast, easy and starts at just $5 per month. Help us wage the war on bad web design!

(And for our current members, thank you so much. Make sure you check your account preferences to make sure you’re getting the most out of your membership. Email us here if you have any questions.)

OK, I’ll release you to the rest of your week. See you on Friday!