Skip to content
Farmer John Harold checks an ear of sweet corn for bugs and bird damage while a harvest crew with the Tuxedo Corn Company of Olathe Colo., works to remove thousands of ears of its Olathe Sweet Sweet Corn crop from a field west of Olathe July 10, 2018. The estimated yeild this year is 33,600,000 ears of the famous sweet corn which will be shipped to stores all over the United States.

Good morning and happy Wednesday, all. A few of you pointed out that the link to the article “Colorado Never Disappoints” was broken by the time I sent out Monday’s Sunriser, so I want to point you to the correct link, this time with a few of Dan Fleser’s photos of the Indian Peaks Wilderness.

With corrections out of the way, I’m going to shorten my usual note up top here so we can get right to the news (If you really want to hear my thoughts on the world, I’ve got a bit on the state of local news down below).

Let’s shuck this corn already, shall we?

Sweet corn put Olathe on the map, but the seeds of economic revival didn’t take

Workers walk next to the two-story mule jack as they ready for the “first toss” of the sweet corn season in Olathe early Wednesday morning. (William Woody, Special to The Colorado Sun)

Olathe Sweet corn is a full-fledged brand, thanks to the efforts of farmer John Harold, who trademarked a sugary variety developed by “Corn King” David Galinat in 1987. But behind the branding is a town struggling to get a slice of Colorado’s booming economy.

>> DELAYED HARVEST, CORPORATE SEED WARS Nancy Lofholm has an expansive look at the history and current role of corn in Olathe, from the global conglomerates that are jacking up seed prices to the longtime residents unhappy with how corn changed the flavor of the town. You need to read this before the first ear hits your grill this summer.

When laws are passed to require convicted sex offenders to be registered and named in public databases, there is almost always universal support. And even in neighborhoods that don’t have zoning laws around sex offenders, landlords running background checks can effectively ban sex offenders from finding places to live. But as Karen Auge reports, the consequences of those well-intentioned laws means that low-income communities in Colorado end up with high concentrations of registered sex-offenders.

>> FEARS VS. FACTS Karen’s story gets deep into the thorny issues of inequality and zoning discrimination, but also looks at new research that shows little actual evidence of the widely held assumption that living near sex offenders puts children at risk. Don’t miss this fascinating, challenging piece (which is also available en español).

U.S. Rep. Scott Tipton pushed back on Colorado Democrats’ CORE Act. Now he has his own public lands bill.

Jesse Paul’s lede says it all: “Passing a major Colorado public lands bill through Congress just became a lot more complicated.” But that might be quite the understatement, with 2020 politics in play and big questions about whether the state will now have to wait a long, long while before seeing the passage of federal public lands legislation.

>> A PARTISAN SPLIT IN COLORADO’S DELEGATION Jesse has the backstory on where the new Tipton bill — with the support of U.S. Sen. Cory Gardner — does and does not overlap with the ambitious CORE Act launched by Democratic members of the state’s delegation earlier this year, including differences in land location, number of acres and the relationship between public lands and oil and gas development — and why Tipton says he didn’t just try to work with Democrats on their bill.

1275 and 1271 Sherman Street, one block south of the state Capitol in Denver, photographed on July 21. The buildings and an adjacent parking lot are owned by the state government and are part of a proposed affordable housing development. (Eric Lubbers, The Colorado Sun)

Just a block south of the state Capitol building in Denver sit two dilapidated warehouses owned by the state of Colorado. In a city with a massive affordable housing shortage, a plan to use that land to add affordable units in one of Denver’s hippest neighborhoods is coming together.

>> EMPHASIS ON HOUSING TEACHERS Brian Eason has the details on the innovative plan in the works that would add 103 affordable units to the area and be a moneymaker for public schools.

“Rural carriers want to do this, but they look at their pocketbook and realize that if I got every customer in the area, even after 50 years I’m not going to come out ahead. I could not afford to do these projects without the (grant). It’s been a wonderful thing.”

Colorado’s goal to bring fast internet to every corner of the state is making progress, but there are still about 85,000 households in rural Colorado without access to what the federal government defines as broadband-speed internet access.

>> HOW BROADBAND FUNDING REALLY WORKS Tamara Chuang has details of some exciting new efforts to get gigabit (even faster than I’m working on here in Denver) broadband into rural Colorado and the hurdles that still remain in some communities.

Support local journalism and show off your business. Underwriting The Sun’s newsletters is a great way to reach a smart, engaged audience in Colorado. Email underwriting@coloradosun.com for rates.

// As we reported last week, the Bureau of Land Management will relocate its headquarters to Grand Junction as part of the agency’s plan to spread jobs around the country, touted as a victory by Sen. Cory Gardner. Former directors of the agency have now gone public saying they believe the move is an attempt to “make it almost impossible [for the federal government] to manage these public lands” as a stepping stone to transferring control of public lands to states, a longtime goal of some conservative politicians in the West. // The Colorado Sun, Bloomberg Environment

// Tom’s Diner on Colfax, just a few hundred feet from where I write this newsletter, is a step closer to being designated as a Denver landmark — against the wishes of owner Tom Messina. // The Denver Post 🔑

// In the six years since large-capacity magazines were banned in Colorado, just 11 people have been sentenced for violating the law and many people still use them openly at shooting ranges around the state. // KUNC

// I watch a lot of movies, but between the rise of streaming and the aftermath of covering the Aurora theater shooting, I virtually stopped going to movie theaters. But lately I’ve been pulled back into the experience at places like the Alamo Drafthouse and the renovated Esquire and Denver Pavilions — and as John Wenzel writes, I’m not alone, as Denver-area theaters are bucking national trends to thrive. // The Denver Post 🔑

// The Epic Pass just got a whole bunch of new resorts east of the Mississippi with Vail’s acquisition of Peak Resorts. // Summit Daily News

// One of the worst parts of the modern internet is that there is money to be made in being a conspiracy theorist, which incentivizes the harassment of already traumatized victims of crimes. Alex Jones has been effectively kicked off every major platform because of his harassment of the victims of Sandy Hook, but smaller-scale conspiracy peddlers have begun harassing the family of Shannan Watts, seemingly with impunity. // 9News

// From the “homeowners will complain about anything” files: Neighbors to Heritage High School’s new athletic field say that the new lighting on the field will “tank their property values” and the facilities will bring “traffic and crime” to their neighborhood. // Littleton Independent

// Study after study — including a recent one that shows that shrinking local news leads to fewer people bothering to run for mayor — shows a direct connection between strong local news and local democracy. And these kinds of mergers tend to result in fewer journalists producing less coverage and/or chasing less impactful coverage in order to satisfy corporate pressures.

This is a reminder of why your support of The Colorado Sun is so important. We work to keep the people of Colorado informed, not for an ever-increasing bottom line or distant corporate owners. If you aren’t already a member, it’s quick and easy to become one, starting at just $5 per month at coloradosun.com/join.

Already a member? First, thank you so much for your support. Second, you can continue that support by helping spread the word. Share a favorite story (or three) with your social network. Forward The Sunriser to your coworkers and encourage them to sign up (coloradosun.com/newsletters). Talk to your boss (or maybe you are the boss) about sponsoring our newsletters (email underwriting@coloradosun.com for details).

Every single new reader is a potential new member, which in turn is potentially more journalism for Colorado. We’re all in this together. 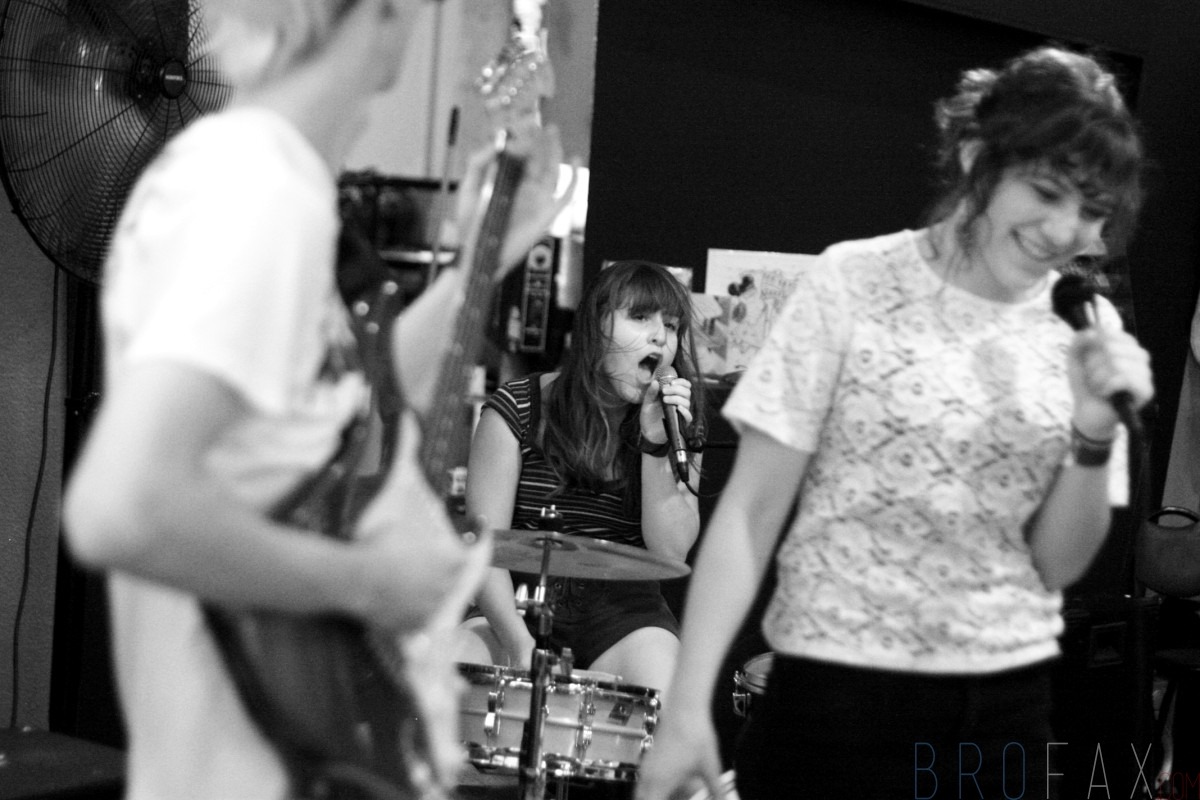 Dearly departed Denver band Sauna playing inside what was then Indy Ink on South Broadway at the UMS in 2011. (Eric Lubbers, The Colorado Sun)

The Thing: The Underground Music Showcase (This weekend — July 26-28 — on South Broadway in Denver, tickets and info)Why You Might Like It: I’m not going to mince words. This is the best music festival in the state no matter how you measure it and a personal summer ritual for my entire adult life (I even made a Tumblr a million years ago for photos I took there). It might not have the biggest bands, but even at the full price of $75 for a weekend pass, the experience of 200-plus shows from local and national acts, plus art and food trucks in one of my favorite neighborhoods in Denver is easily the best value of entertainment per dollar in the state. And if you can’t quite fathom spending three days on South Broadway, they do have day passes, so check out the schedule and see if anything catches your eye.

Let’s finish this newsletter with a cooperative spirit. Here’s a gif to illustrate that we’re all on the same fire truck and we’ll only get where we want to be if we all stay in sync. We’re almost there, and we will continue keeping up our end of the bargain with informative journalism, and we hope you’ll help us serve our state.

Now that Colorado lawmakers have put Gallagher repeal on the ballot, will they actually be able to pass it?

Published on Jul 7, 2020 4:20AM MDT
Politics and Government Primary category in which blog post is published

Published on Jul 7, 2020 4:19AM MDT
Crime and Courts Primary category in which blog post is published