Sunriser: Colorado’s dirty air is slightly cleaner / What Polis’ first vetoes mean / How to deal with snakebites in the backcountry / And much more

Good morning and happy first Monday of June! I hope everyone has been enjoying Hail Season so far (as a household with no garage and a recently acquired car, the last 10 days or so have been round after round of Quickly Try to Move the Car Under a Big Tree.)

As many of you pointed out on Friday, we had a couple of misfired links, specifically for Jesse Paul’s breakdown of the breakdown happening in the Denver mayoral race. Ballots are due tomorrow by 7 p.m., so you’ve still got time to read it (via a correct link) before you cast your vote (because even if you don’t like either candidate, there are several other council runoffs to be decided tomorrow.)

And seriously, don’t ever be shy about letting me know about errors or bad links, my inbox is open.

OK, we have everything from rattlesnakes to air pollution to get to, so let’s rain on this chalk-art festival already, shall we? (More on that in the Shortlist.) 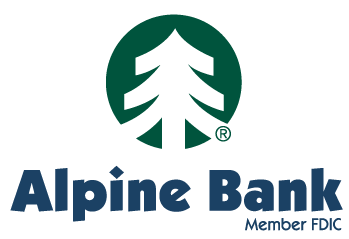 A layer of haze covers the view of Pikes Peak rising over the south Denver metro area on Sunday, Nov. 4, 2018. (Jesse Paul, The Colorado Sun)

It’s been 11 years since the EPA declared that the maximum amount of ozone pollution should be 75 parts per billion. Since 1998, the nine-county northern Front Range has never dipped below 78, even after the EPA lowered the maximum to 70 ppb in 2015. That’s just one of the discoveries in Tamara Chuang and John Frank’s analysis of the state of Colorado air quality.

>> NEW LAWS EXPECTED TO SPEED UP PROGRESS Click here to read the analysis, including the history of Colorado’s battle to clean up its air and how new laws should help Colorado get to compliance in the next five years.

Don’t suck out the venom, do bring your phone: What a trail runner’s rattlesnake bite can teach Colorado adventurers

— Tres Binkley, referring to his thigh that had swollen to 24 inches around after a snakebite

If there is one thing you can take away from the story of Tres Binkley, it’s this: When you’re out trail running in a place like Del Norte and you’re bitten (twice) by an unseen rattlesnake, wait until you’re at the ER to post to Strava.

>> MORE PEOPLE GETTING OUTDOORS = MORE SNAKE ENCOUNTERS John McEvoy has the whole saga of Binkley’s bite, plus some real-world advice on basic snakebite first aid, including which movie myths to ignore. Click here to read.

Why Jared Polis vetoed 5 bills, and what it could mean for thousands of licensed professionals in Colorado

“There really was no significant opposition to the bill anywhere this session.”

— State Rep. Dafna Michaelson Jenet, D-Commerce City, on Senate Bill 133 which was vetoed by the governor.

Late on a Friday evening, just after business hours, Gov. Jared Polis issued his first five vetoes. One was because of a drafting error, but the other four highlighted a rift between Polis and lawmakers, even in his own party.

>> SPORTS AGENTS, HOA MANAGERS AND GENETIC COUNSELORS John Frank explains the laws he vetoed — in short, they would have added regulation for certain licensed professionals — and how it highlights the governor’s soft stance toward regulation as his party attempts to ramp it up. 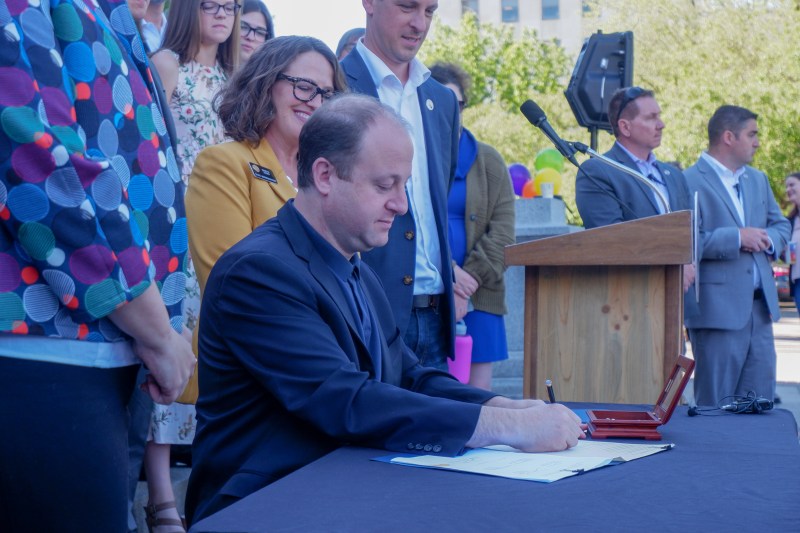 Colorado Gov. Jared Polis signs House Bill 1039 and House Bill 1129 into law on the west steps of the Colorado Capitol on Friday, May 31, 2019. (Jesse Paul, The Colorado Sun)

>> MORE: It wasn’t all vetoes on Friday. During business hours (and with a big ceremony) Gov. Polis signed into law some signficant LGBTQ legislation, including banning gay “conversion therapy” and easing the process for transgender people to change their birth certificates.

// I’ve been reading a lot of The New York Times’ ambitious “Privacy Project” about the hundreds of ways we’re aiding and abetting our own loss of privacy. But beyond sharing selfies and clicking on ads, one aspect of privacy that is finally getting some attention is the combination of cheap facial recognition software + public cameras, like this one on top of a restaurant in Manhattan that the Times turned into an “‘Unbelievable’ (but legal) facial recognition machine.”

But to get to the point where anyone with a credit card and $100 can build a machine like this, there had to be a lot of academic research. Enter University of Colorado Colorado Springs professor Terrance Boult, who recently came under fire from some digital rights advocates for building a camera that filmed college students in 2012 and 2013 to create a database to help train this software, as first reported by the Colorado Springs Independent. It’s a good reminder that this stuff doesn’t just come out of nowhere. // New York Times, Colorado Springs Independent

// County sheriffs around Colorado, like many others around the country, have been using their Facebook pages to post lengthy political statements the past few years. But Colorado lawmakers from both parties are criticizing one such post by Larimer County Sheriff Justin Smith about the state’s new criminal justice laws as “irresponsible.” // Coloradoan 🔑

// I’m a big fan of art that is designed to be destroyed, like Tibetan sand mandalas or Andy Goldsworthy’s natural art or … Denver’s annual chalk art festival that was met with a hard rain over the weekend. Denverite’s Kevin Beaty has some great photos of the chalky artwork looking beautiful even as it’s being destroyed. // Denverite

// Colorado farmers may have been able to stomach the U.S. trade war with China, but if President Trump follows through with talk of tariffs with Mexico, it would directly impact a massive source of trade for places like Weld County. // Greeley Tribune 🔑 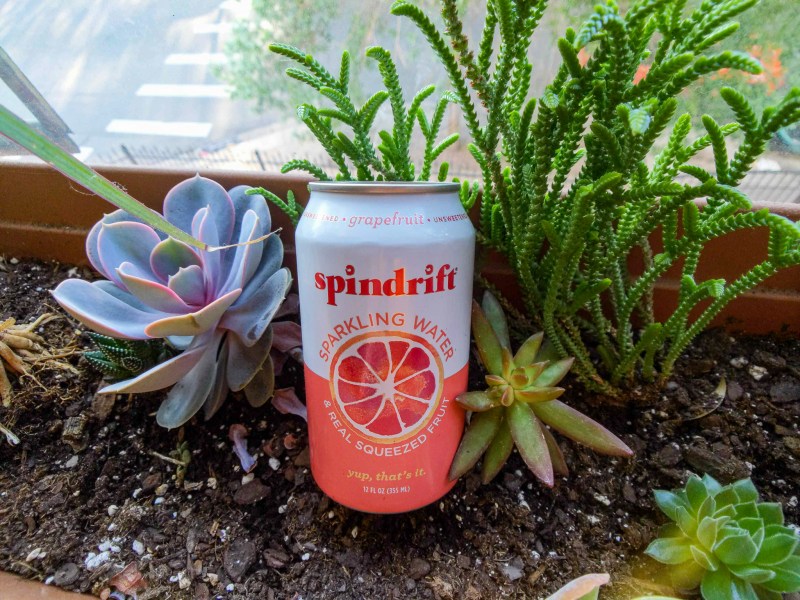 A can of grapefruit Spindrift, nestled in my rebounding succulent window box with a little bit of lens flare in order to reach Peak Millennial Aesthetic™. (Eric Lubbers, The Colorado Sun)

The Thing: A sparkling water that actually has some flavor

Why You Might Like It: Here’s what happens when you can’t drink alcohol but you’d like to actually have a social life: You end up drinking so much soda. It doesn’t help that once the siren song of Vanilla Coke hits my senses I can thoughtlessly polish off a 12-pack in just a few days (and don’t get me started on Orange Vanilla Coke, which is basically Corn Syrup Ambrosia.) So when the world went crazy over La Croix a few years ago, I thought, “This is it! This is the alternative I’ve been waiting for to kick soda for good.” Then I tried it, and it tasted like nothing. Worse, it tasted like the absence of something because my palate has been trained since childhood that bubbles = sugar. I tried diet drinks (gave me headaches) and every kind of sparkling water out there and nothing came close.

I had seen Spindrift at the grocery store and written it off as another La Croix chaser until someone on Twitter pointed out that it doesn’t have zero calories, it has 17 calories. And let me tell you: those 17 calories make all the difference in the world. Just enough actual sugar to satisfy my lizard brain, but so few calories I can burn them off walking the dog across the street. I’ve only had the grapefruit version but this is a heck of a lineup of flavors that you can bet I’m going to be hunting down all summer.

What’s Your Thing? If you have something that you just can’t stop raving about that you’d like to share, send us an email at things@coloradosun.com and you could be published in a future Sunriser!

Thanks for getting through this Monday Sunriser with me. Hopefully it has you feeling informed, energized and ready to tackle this week.

As always, we are eternally grateful for your help spreading the word about The Sun and the stories we publish. The more people who learn about us -> the more people become members -> the more journalism we get to produce for our awesome state. Getting people to sign up for The Sunriser at coloradosun.com/newsletters is a great start.

Have a great day, stay out of the hail and we’ll see you on Wednesday.