Sunriser: What the heck is happening in Denver? / Aid-in-dying use / Debate over lionizing student heros / Startups outside the Front Range

And just like that, it’s nearly June. Hi Sunriser friends, I’m just sitting here wondering if we’re actually going to get a real spring before the summer overtakes us (though here in Denver it’s looking like we might get one pleasant weekend before the real heat kicks in).

You all had some wonderful spelling bee elimination words (Rose B.’s “polygamous” and Kath R.’s “sombrero” — in fifth grade she was sure it was spelled “sombraro” — were my favorites) but the uniting factor in all the stories was that whatever the word was, the memory burned the correct spelling into the speller’s impressionable brain for eternity. And seriously, the eight-way co-championship at nationals last night is one of the most remarkable things I’ve seen in any competitive arena.

We have a p-o-t-p-o-u-r-r-i of news for you today, so let’s pull this espresso shot already, shall we?

Hello reader! I’m going to take a short pause before we jump into the news to make a familiar plea: We need your support. All the journalism you read in these Sunrisers doesn’t just appear out of thin air. Our team of reporters, editors, photographers and producers works hard to make it happen to serve the people of Colorado. You can join our community and ensure the future of independent, thoughtful journalism for as little as $5/month at coloradosun.com/join. Do it now and carry the warm feeling with you all through the weekend.

You can join our community and ensure the future of independent, thoughtful journalism for as little as $5/month at coloradosun.com/join. Do it now and carry the warm feeling with you all through the weekend.

Pictured from left to right are filmmakers Jessica Ham and Rebekah Henderson as they film an election-night conversation between Kerrie Joy, her partner and Denver City Council candidate Candi CdeBaca, and campaign volunteer Elisabeth Epps, during the election night watch party that included CdeBaca’s campaign on May 7, 2019. (Andy Colwell, Special to The Colorado Sun)

If you have Netflix, you’ve likely been served up a trailer for the documentary “Knock Down the House,” the film that tracked four women running for Congress in 2018 (that happened to be filming the breakout candidacy of U.S. Rep. Alexandria Ocasio-Cortez). But here in Colorado, a filmmaker is working on her own film about the effort by women of color to have a stronger voice in the politics that affects them.

>> “RUNNING WITH MY GIRLS”: Click to read Joanne Ostrow’s feature on Rebekah Henderson’s project that is still rolling through the contentious, bitter and long Denver municipal election.

>> WHAT THE HECK IS GOING ON WITH THE DENVER MAYOR’S RACE? The biggest city in Colorado has some big, obvious issues: Growth. Congestion. Homelessness. Affordability. But instead of an election focused on the policy to address those issues, the runoff campaign for mayor has devolved into a fiery personality clash. Jesse Paul looks at this bizarre race and what it means for the future of Colorado’s capital city.

His wife was first to use Colorado’s aid-in-dying law. His advocacy made him an accidental resource for others.

“I owe it to the people who are dying. I don’t think anybody should have to go through all the indignities that come at the end, the pain and suffering. I felt I should let people know what happened with us, how it went and where they could go to find help.”

— Herb Myers, whose wife, Kathy, is believed to be the first person in Colorado to employ the state’s aid-in-dying law to help end her terminal COPD.

Colorado’s law allowing doctors to prescribe aid-in-dying medication overwhelmingly passed two years ago. But just because something is legal doesn’t mean that the system for people to actually utilize the law exists.

>> HOW COLORADO HAS USED AID-IN-DYING SINCE 2017: Kevin Simpson has a nuanced look at how Herb Myers’ life has changed since the passing of his wife as well as statistics that show how Colorado doctors and patients are slowly embracing aid-in-dying options. Click here to read the whole story.

“We understand that there is a fine line between recognizing and honoring individuals who die in circumstances like this and how painful it is. But just because it’s a fine line doesn’t mean we don’t have to recognize it and pay attention to it.”

After two high-profile cases of students fighting back and dying — including Kendrick Castillo at STEM School in Highlands Ranch — psychologists are concerned that a shift in school safety tactics could have dangerous ripple effects.

>> SURVIVOR’S GUILT AND OTHER UNINTENDED CONSEQUENCES: Jennifer Brown’s report looks at the growing movement to teach kids to fight back and why — no matter how undoubtedly brave their actions — glamorizing the deaths of young people like “cartoon superheroes” is raising alarm among child psychologists. Click here to read the whole story.

“I would argue that the real money in the state is not actually in the Front Range. It’s in mountain communities. There is probably more wealth in Vail, Aspen and Telluride than there is in Denver.”

Colorado startups aren’t just in Denver and Boulder. As Jason Blevins writes, young companies like Rever — a motorcycle navigation and ride-sharing app with nearly 1 million users — are based in places like Eagle, Grand Junction and other places outside the urban corridor.

>> COLORADO’S “SECRET WEAPON”: Jason Blevins reports on the promise of the Techstars Startup Week and how connecting rural investors with companies in their own backyard is a strategic advantage for the state.

>> COLORADO WANTS TO CONNECT EVERY RESIDENT WITH A PARK OR A TRAIL. HOW’S THAT GOING? Jason Blevins, in coordination with Aspen Journalism, looked at the state’s Colorado the Beautiful Initiative as it turns three, including how it has distributed nearly $30 million in lottery money and what progress has been made on the 16 highest-profile trails in the state. 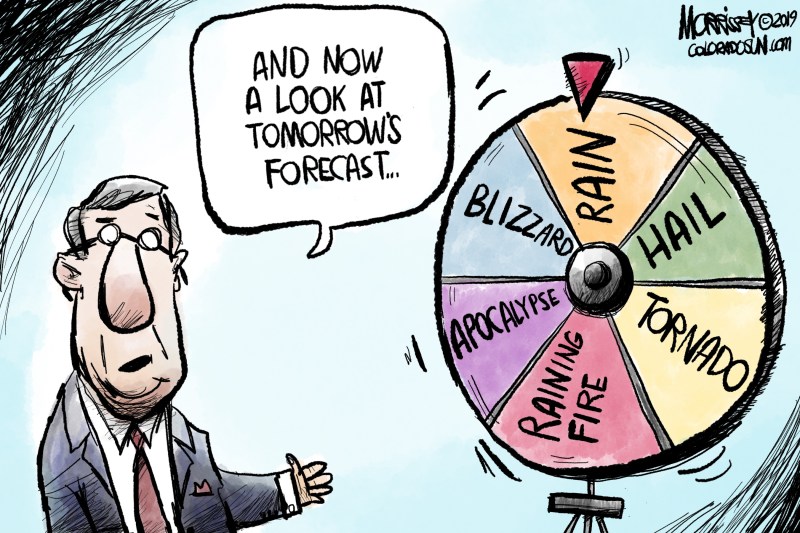 // Coloradans never tire of talking about — and marveling at — our state’s unpredictable weather. Cartoonist Drew Litton wonders how this strange spring is treating early season campers, while Jim Morrissey casts a sympathetic eye toward TV forecasters.

// Meanwhile, in “What’d I Miss?,” Ossie engages in that age-old discussion of how he should embrace his future, and how maybe his mom needs to let go of her past.

Have you ever read a paragraph so well-crafted, so vivid and evocative that you just sit back and smile? That happens in this week’s SunLit excerpt from “Mad Boy,” the Colorado Book Award winner for Literary Fiction by Nick Arvin. I won’t say which paragraph(s) it was for me, but even in a relatively brief slice of this adventure novel, set during the War of 1812, anyone can see why it earned such high accolades. And in the SunLit interview with Arvin, you’ll learn how some comments he heard during the first Iraq war started him down the path to write about this largely overlooked period of American history.

The Colorado beer festival season starts this weekend. (Here’s my rundown on the can’t miss events). The beer tasting at Oskar Blues’ Burning Can festival this weekend features a longtime favorite brewery, California’s 21st Amendment. I revisited its flagship Brew Free or Die IPA not long ago and loved the sticky bitterness and bold flavors. And if you’re looking for something lighter, try the brewery’s wheat beer, Hell or High Watermelon. Years ago at the brewery in San Francisco, they served it to me with a giant watermelon slice on the rim. Tasted like summer.

// The act of simply reading the words “Mitsubishi Delica” is soothing. I’ve never seen one of the Japanese camping-friendly vans in person, but a pair of Denver brothers is importing used vans and reselling them stateside as more and more people look to live that #vanlife (but can’t afford a $60K Mercedes Sprinter). // BusinessDen

// I talk a lot about the cybersecurity of local government in this section — not only is it an interest of mine personally, but it’s increasingly becoming the most popular form of cyber attack in the country. Dave Sachs at Denverite tried to talk to the City of Denver about its vulnerabilities and, surprise, they weren’t exactly leaping at the opportunity to expose them. But Dave’s story has some insight into just how seriously the city is taking the threat. // Denverite

// Conservationists vs. the U.S. Forest Service: The topic? The use of chainsaws in two Southwest Colorado wilderness areas. // Durango Herald

What’s Your Thing? If you have something that you just can’t stop raving about that you’d like to share, send us an email at things@coloradosun.com and you could be published in a future Sunriser!

The Thing: “Booksmart” (in theaters)

Why You Might Like It: Granted, when I saw “Booksmart” last weekend the weather was a was a little more conducive to hiding away in a movie theater, but if you can muster the effort to actually leave the house for entertainment, it is absolutely worth your time. The trailer might make it look like Superbad But With Girls, but the film is a smart, hilarious take on the pressures of academic hyperachievement, personal authenticity and awkward romantic growth, all while avoiding the “teen romp” cliches that are just so played out at this point. There’s a reason a bunch of the reviews use the word “wise” to describe this movie. And Olivia Wilde is a real talent behind the camera, because the movie looks great and is really well-paced, something I can’t say about a lot of comedies in the last few years. (Heads up: It is rated R, mostly because it features teens talking like teens do about topics teens talk about.)

Thanks for sticking with us through this holiday-shortened week. Even though it’s only been four days, you earned this weekend. As always, you sharing even one of our stories with people in your life can have a huge effect on helping us spread the word about The Sun so we can continue to grow our community.

Have an absolutely fabulous weekend and we’ll see you back here on Monday.