Sunriser: Wage theft in Colorado, a vote on gray wolves, oil and gas cash, a sprint at the Capitol, an intimate rendezvous with a stranger and much more

Good morning from beautiful, exotic Yuma, Colorado! I’m in the homelands for a long weekend to celebrate my super-cute niece’s first birthday and — a bonus — to spend a little time outside of the metro area.

One thing I’ve truly enjoyed about being a part of The Sun is seeing stories come in from all over this beautiful, diverse (almost) rectangle of a state. And just like the stories, the members who support our work (over at coloradosun.com/join) come from the Front Range, the Eastern Plains and the Western Slope and just about every little fiefdom of Colorado. And that’s our mission: Bring thoughtful, independent journalism to the entire state.

(Speaking of our mission, have you filled out our feedback survey yet? We’re doing this for the people of Colorado, so it helps us to check in with you every once in a while.)

OK, we have a full slate for today, so let’s tip this cow already, shall we? 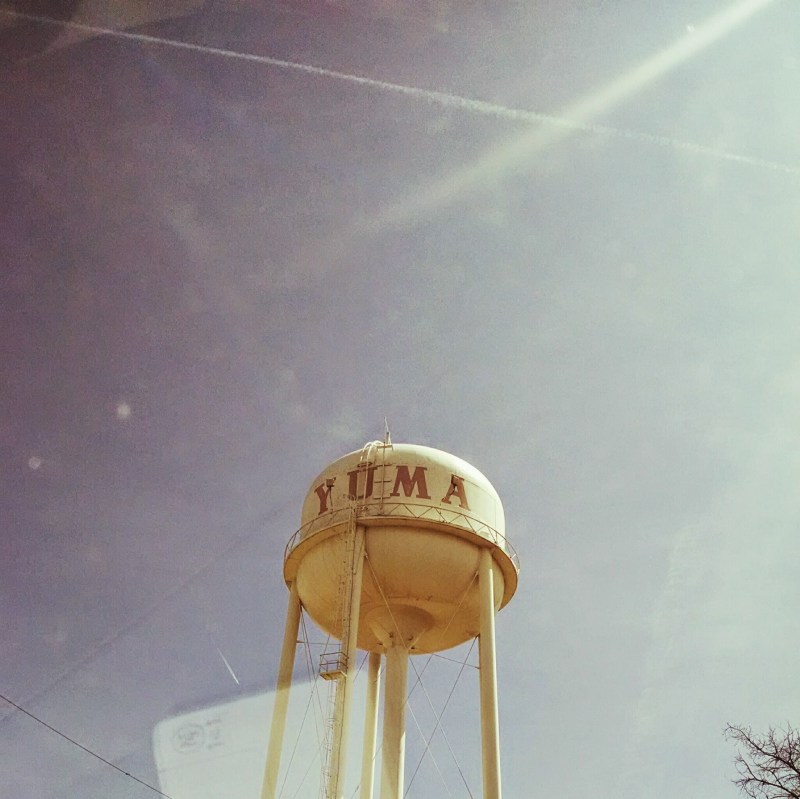 “Employers are ripping off the workers and that’s basically their business model. Generally, they don’t fear consequences for what they have done.”

You probably don’t hear much about wage theft, even though when you add it up, it’s one of the biggest crimes in the country (Politico estimated about $15 billion in income is illegally withheld from workers.) Part of the reason it can be so widespread is laws like Colorado’s, which considers not paying a worker what they’re owed to be only an unclassified misdemeanor, meaning it almost isn’t worth the time to enforce for the state’s already understaffed labor officials. But that could be changing soon. Jennifer Brown reports on the construction unions that have mobilized to give Colorado’s wage theft law some teeth as part of an effort to crack down on labor trafficking in the state’s underground construction economy.

>> Read the whole story here, including details of the hidden-camera stings deployed to catch shady labor brokers in the act.

For the first time, voters could decide on the fate of gray wolves in Colorado

Colorado’s love/hate relationship with gray wolves stretches back to before we were even a state, though it reached a fever pitch in the early 20th century during the decades-long range war that effectively eradicated the canines from the entire West. But as other states have slowly brought back the natural predators, Colorado’s Western Slope is seen by advocates as the keystone to connect a new population from the Arctic to Mexico. But rather than state and federal wildlife managers, it could be Colorado voters like you and me who make the final decision. Or as Sun reporter Jesse Paul put it:

>> Read Jason Belvins’ look at the effort to get wolves on the ballot here.

(This story first appeared in The Outsider, The Sun’s premium outdoors newsletter. See how to subscribe here.)

The oil and gas fight isn’t over in Colorado; the battlegrounds (and a lot of cash) have just shifted to local elections

You might be tempted to believe Gov. Jared Polis’ proclamation that the “oil and gas wars … are over” as he signed the new sweeping oil and gas regulation bill into law. But as Sandra Fish reports, that bill’s enshrinement of local control means that the big money oil and gas already spends on elections will shift to city and county ballots all over the state.

// Meanwhile, Colorado is planning its energy future with a major overhaul of its climate goals, focused first and foremost on scrubbing carbon from its electricity (which if you remember these charts from a few weeks ago, is still dominated by coal power). Read Mark Jaffe’s explainer of the overhaul here.

// The big oil and gas bill will not be targeted for a repeal by opponents — yet.

You might be voting on four spending increases in November

Ah, the wild world of a state operating under TABOR. After The Sun broke the story of the last-minute attempt to boost nicotine taxes to fund schools and health care, reporter Jesse Paul looked ahead to see how November’s ballot could be shaping up. And he found that there could be as many as four major revenue initiatives in front of voters that could end up working against each other in a state with a lot of needs and a reputation for rejecting new taxes of all stripes.

>> Check out Jesse’s analysis of the ballot here.

DEVELOPING: The horrific crash on I-70 in Lakewood yesterday left four people dead. The driver of the flat-bed tractor-trailer that caused the wreck is behind bars and facing a list of charges. Here’s our story.

An intimate improv rendezvous with an actor? A new Denver interactive performance draws you out — if you let it

Joanne Ostrow’s advice if you want to get the most out of the Denver Center’s Off-Center production “Between Us”: Don’t overthink. The extremely intimate performance is so far outside of what you might think of as theater you may forget that it’s acting. I don’t want to spoil anything, so go read Joanne’s review (and preview of what’s next from Off-Center) and get ready for a very personal night at the theater. 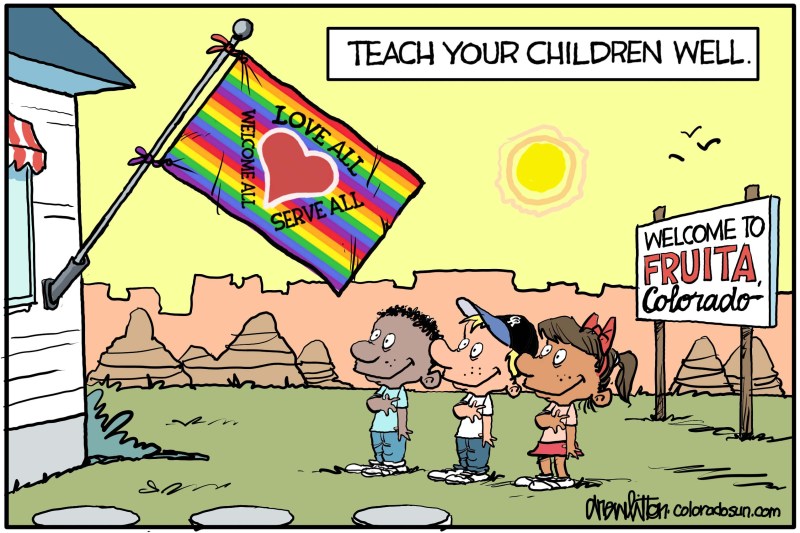 // Drew Litton celebrates the people of Fruita in this week’s cartoon (backstory here, if you missed it).

// Ossie’s mom has a secret past in this week’s edition of “What’d I Miss?” (Start the strip from the beginning here.)

I’m excited about this week’s SunLit, featuring a Denver comic I’ve been following since his days of writing columns for Westword, Adam Cayton-Holland. Kevin Simpson has the details:

This week in SunLit, readers will find an increasingly familiar face. Adam Cayton-Holland’s writing, standup comedy and performances with The Grawlix comedy troupe have made him a Colorado fixture. More recently, the three-season run of the truTV series, “Those Who Can’t,” placed him even more prominently on the national stage. In the prologue excerpted from his first book, “Tragedy Plus Time,” he takes you inside the meeting that launched the TV show, which came only days after his sister’s death by suicide. And in the author interview, he explains how the writing process gave him another chance to spend time with her. A must-read.

This is the time of year for a ¡Venga! Mexican Lager from Cervecería Colorado, which I named as my pick for best new brewery in 2018. The beer is easy drinking and best chelada-style with a lime and salt on the rim. If you can’t make it to the brewery in Denver, no fear: Cerveceria is now distributing. Look for the colorful cans, and enjoy.

// A man who held a reprehensible (but constitutionally protected) “butt sign” protesting Gov. Jared Polis was awarded $70,000 after he was detained by Loveland police. // Loveland Reporter-Herald 🔑

// The EPA just weakened the standards for measuring the firefighting chemical that has leached into the groundwater near Peterson Air Force Base in Colorado and other bases around the country. // New York Times

// First, it was typewriters, vinyl records and film photography. Now, millinery is back and très chic in Denver. // 303 Magazine

// This is super cool: A University of Denver student plotted Denver’s old streetcar routes on a modern map. I’m practically salivating over the idea of a public transportation system that actually goes where people want to go. // Ryan Keeney

// There are nearly two dozen undetonated explosives in Colorado’s backcountry after the season’s heavy avalanche mitigation work (which you may remember from Jason Blevins’ awesome story about Telluride). // OutThere Colorado, The Colorado Sun

Why You Might Like It: I’m not a big horror movie fan, but I really loved “It Follows,” the 2014 debut of director David Robert Mitchell. So when the trailer dropped for his follow-up, a kind of sun-drenched throwback noir called “Under The Silver Lake,” I was very excited. After several months of missed release dates and battles with his production company, the movie was finally released, skipping most theaters and heading straight to streaming services.

I absolutely loved it, but critics seem really split on it, so I’ll say this: As long as you can prepare yourself for some achingly stylized scenes and some plot points that don’t resolve cleanly, you can end up watching a really beautiful homage to David Lynch and Alfred Hitchcock. It’s all wrapped around a core of excellent satire of the rich and the gaudy that made me want there to be an “Under the Silver Lake” extended cinematic universe a la Marvel. Plus Andrew Garfield and Elvis’ granddaughter Riley Keough put on some captivating performances. It’s a great weekend stream if you want to feel artsy and still have a good time. (It’s still a little bit of a horror movie and rated R for a reason, so don’t watch with the kids).

Thanks for getting this deep into another newsy Sunriser. I’m off to explore my hometown on a weekday (a rarity these days), but as usual, readers like you are the best advertising we have here at The Sun. If anything in this newsletter taught you something or piqued your interest, we’d love it if you could grab a link and share it with your people. Every new person who sees our stuff is a potential new member (which in turn is potentially more journalism for Colorado).

Keep this Sunriser around for the weekend and enjoy our work. The Colorado legislature is meeting Saturday, the first non-weekday session in more than 25 years, as lawmakers press on toward adjournment on May 3, so we will have lots to share on Monday.