Good Wednesday, folks. It’s a beautiful day just about everywhere in our great state, so I won’t take up too much of your time here. I want to take a minute to say hi to all of the new members that joined our community here during our Big Reader drive over the last few days: Hello!

It’s a great reminder that membership with The Sun is one of the most efficient ways to support journalism in Colorado. We work to keep our overhead as low as possible so we can channel the money raised through memberships directly into more journalism. (I haven’t quite turned off the BIGREADER discount code if you missed out, so hurry over to coloradosun.com/join to take advantage of my laziness).

OK, I’m not kidding when I say we have a smorgasbord of news in today’s Sunriser, from impeachment to typewriters to vape taxes to flash floods.

Let’s blow this cotton already, shall we?

Talk QWERTY to me: A vintage typewriter shop in Glenwood Springs gets analog hearts racing 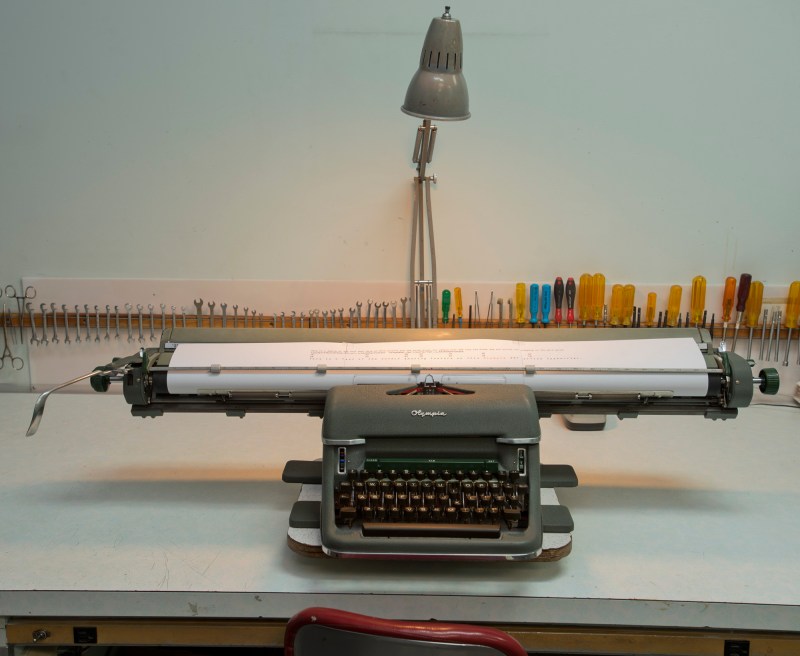 A rare Olympia SG1 typewriter, circa 1965, with a 36-inch carriage platen, completely refurbished after 100 hours of work by Darwin Raymond. (Ed Kosmicki, Special to The Colorado Sun)

I’ll bet you didn’t start your day thinking you were going to read a twisting, fascinating story about the man who has been repairing and maintaining analog typewriters — including the one Hunter S. Thompson infamously blew apart with a shotgun — in Colorado. But beyond Darwin Raymond’s Glenwood Springs shop, the world of typewriters (like vinyl records and film photography) is becoming trendy all over again. 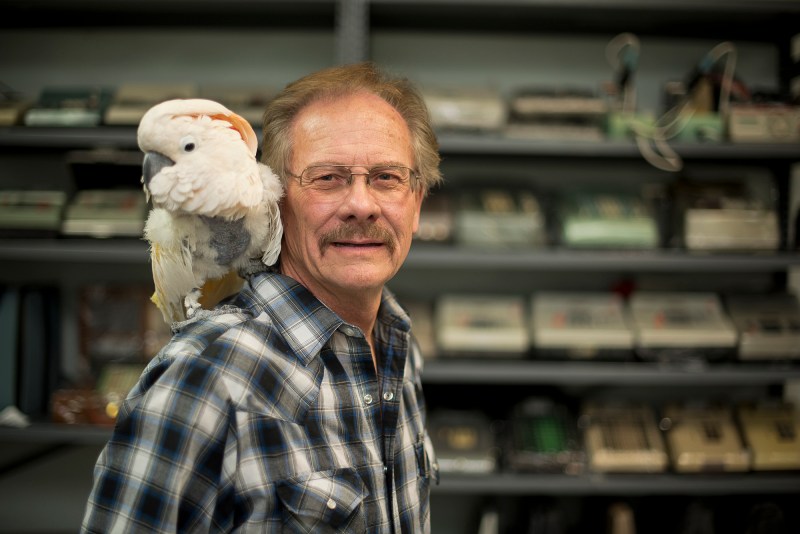 That’s the estimated yearly revenue that would be generated by an increased tax on cigarettes and a brand new tax on the nicotine in vaping devices that Gov. Jared Polis and key Democratic lawmakers will push to get on the November ballot. Some history: Colorado just a few years back rejected an amendment that would have generated similar revenue using tobacco taxes.

>> Chris Osher has all the details of the plan and the behind-the-scenes work to create a coalition to support the measure here.

MORE: Details of the proposal will be unveiled at a noon news conference at the Colorado Capitol. Check coloradosun.com later for more. 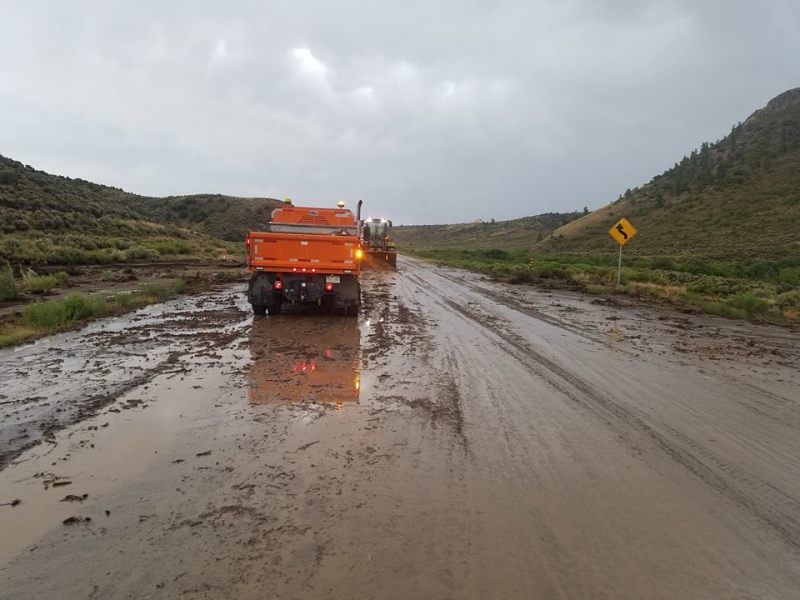 Flooding on U.S. 160 over La Veta Pass after the Spring Creek Fire. (Provided by the Costilla County Sheriff’s Office)

The 2018 wildfires that ripped across Southern Colorado created a much longer-lasting threat: burn scar runoff flooding. For the communities that now find themselves in the crosshairs of runoff, every storm is a potential threat as even a quarter-inch of rain (or, basically the depth of the “¼ inch” text above) could result in devastating flooding.

>> Sue McMillin has the story of how communities are coming together to prepare to fight the floods — and how much work is left to do.

It’s no secret that Colorado is struggling to recycle just about everything — we’ve been covering those woes since the day we launched — but a new bill at the statehouse has a very narrow focus: banning restaurant Styrofoam to-go containers.

>> Tamara Chuang explains the facts behind recycling Styrofoam and why this particular ban isn’t opposed by the restaurant industry.

// Dan Haley, who leads the Colorado Oil & Gas Association, writes in an opinion piece that facts, not conjecture, should drive decisions about regulating the state’s oil and gas industry. // The Colorado Sun

// After word came that Denver’s Dieter Kowalski was killed in the Easter Sunday attacks in Sri Lanka, a fake fundraising page using a local woman’s identity scraped from Facebook was set up attempting to gather donations. 9News has the story and what to look for to spot fakes in the wake of tragedy. // 9News

// Denver has a plan for its next 20 years, and it only took three years to get there. David Sachs has one of the most comprehensive guides I’ve seen explaining how the city is planning its future to curb the problems of the present. // Denverite

// Speaking of Denver, Ben Markus continues his long investigation into Denver Mayor Michael Hancock, this time focused on the (perfectly legal) thousands of dollars worth of plane flights, Broncos tickets and more given as gifts to the mayor from people who do business with the city. // CPR News

// Shopko, a small-box retailer with locations in Yuma and Burlington, has declared bankruptcy. In the process of shuttering stores, some rural towns will lose their only pharmacy. // KUNC

// Hanging Lake is getting registrations from all over the world during its first season with reservations. // Aspen Times

// I drive by this post-modern hunk of stucco several times a week in Cherry Creek and while I dig the aesthetics, I can’t believe they’re asking $14 million for it. // BusinessDen

// Meanwhile, for the bargain price of $895,000, you can buy one of the “oldest cabins in Colorado,” an Estes Park lodge built in 1876 by the Fourth Earl of Dunraven, Windham Wyndham-Quin, which is a real name that I did not just make up. // New Haven Register

// John Hickenlooper hasn’t gotten much national attention since he announced his presidential campaign, but the former governor says that lack of notoriety is … on purpose? // CPR News

// “An Aspen Times investigation into why a longtime Aspen police officer was abruptly fired last month is raising more questions than it answered.” Notable: The just-passed law requiring departments to release such records wouldn’t affect past cases like this one.   // Aspen Times, The Colorado Sun

// I hadn’t heard of the MVExpress Motor Vehicle Tab Renewal kiosks until I saw this photo in The Durango Herald, and now I’m disappointed that there isn’t one anywhere in central Denver (which I discovered using this handy tool). // Durango Herald, COMVexpress.com

// Boys volleyball, unified bowling and girls wrestling are thisclose to getting full CHSAA approval. If you need me, I’ll be working on a reverse-aging machine so I can go back to school and letter in volleyball and bowling. // CHSAA Now

Why You Might Like It: I don’t think I’ll ever be able to go full vegetarian. But between  the environmental impact of meat production and a growing urge to eat more thoughtfully, I don’t eat nearly as much meat as I used to. For years, if you wanted to fake the meat portion of your meal, you’d end up with tofu (which sometimes deservingly gets a bad rap). But recently, a couple of companies have launched meat replacements that use potato, wheat, coconut oil and a plant-based version of the molecule that makes red meat red to make some really convincing (and tasty) versions of ground beef. Yesterday I had an Impossible Burrito at Qdoba and I’m going to say it tastes better than a traditional ground beef burrito (I regularly get sofritas at Chipotle — and like it — but this was so much tastier). The same protein is being tested in Whoppers at Burger King and a rival company, Beyond Burger, is working its way into the diets of NBA stars (who are also investors). So while I can’t imagine a plant-based protein replacing a nice filet, the idea of plants replacing some of the mid-quality beef we eat at fast-food chains seems like it actually has a future (even if they might not be able to use the word “meat” in their products).

And with that, we reach the end of another fully loaded burrito of a Sunriser. I would suggest getting some sun sometime this afternoon (we’ve got a handful of storms heading our way, says the long-term forecast).

But before your lunchtime sunbathing, I’d love it if you could share a story or two from today’s newsletter with your friends, family, coworkers, neighbors, book club, bowling team or any other people you think could use a little thoughtful news in their lives.

Keep an eye out for Friday’s Sunriser written from an exciting, exotic locale! See you then.