Good morning from a rapidly melting Denver. It seems like the only consistent thing about this weather cycle is inconsistency (well, that and well-meaning but confused plant life blasting out enough pollen to make me crawl into a bottle of Flonase).

We have so much on tap in today’s Sunriser, including the conclusion of our investigative series “After Columbine.” It’s been a hard couple of weeks around the state as the anniversary gets closer and memories are resurfaced everywhere you look. It’s my hope (and the whole staff’s) that by focusing on the state of school safety, we have done justice to the legacy of those lost in 1999 in a way that is looking toward the future.

We have the privilege and ability to put this kind of investigative muscle into our journalism because we are funded by readers like you, who live, work and play in Colorado. If you haven’t yet become a member, please consider joining us for as little as $5/month over at coloradosun.com/join. We’re approaching a really big membership milestone.

And if you’re already supporting us (first, thank you so much!), we still need your help to spread the word and this project (at coloradosun.com/columbine) might be a good way to introduce The Sun to your friends, family and coworkers who may not know about us.

But you’re here for news, not a long intro. So let’s shake this umbrella already, shall we? 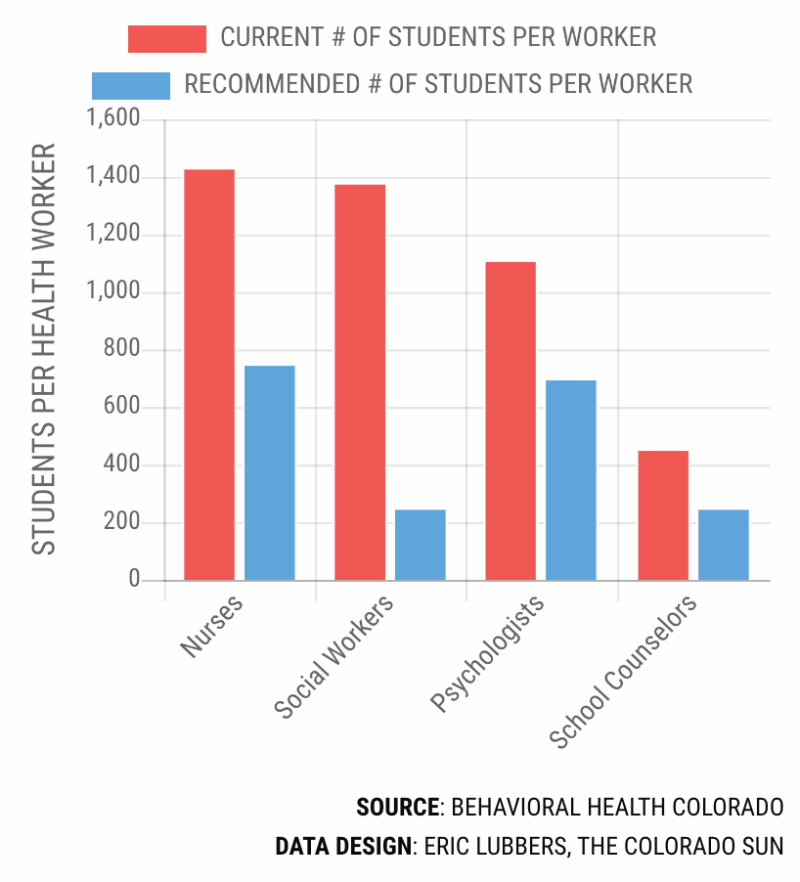 Despite clear connections between mental health and school violence, an investigation by Christopher Osher and Jennifer Brown shows that Colorado spends far more on physical security measures than on health care workers. The chart above shows just how far from the recommended student-to-staff ratios Colorado is on average, but as Chris and Jen write, in some areas of the state like the rural Eastern Plains the ratio is even worse. You’re going to want to take some time to read the whole story, which includes the connection between suicidal thoughts and school shootings, the secrecy behind district spending on physical security upgrades and the obstacles facing the solutions to this issue. 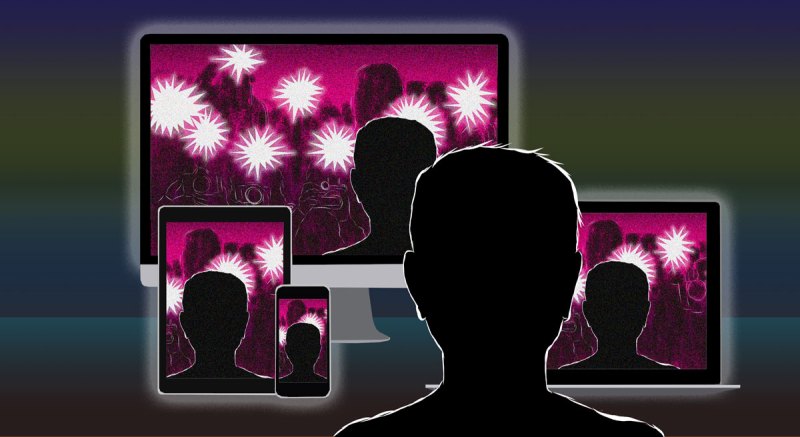 Illustration by Lonnie MF Allen, Special to The Colorado Sun

Shaken, I sat down on the sidewalk. A veteran reporter from a national news outlet sat next to me.

“These stories are tough,” he tried to reassure me, “but they need to be told. It’s important work.”

I asked where he was from.

I want you to read this opinion column from Colorado Sun reporter John Ingold. I understand that you think, “of course you want me to read it, you want me to read everything in this newsletter, that’s why you write it.” That’s true, but this piece — written by a veteran reporter who cut his teeth as an intern staking out Clement Park in the days after the Columbine shooting and diligently reported the entire Aurora theater shooting trial 16 years later — contains so many of the worries and fears that journalists around the country often silently struggle with when covering acts of unspeakable evil. I won’t try to tease this one any more, I just ask you to make time to read his column and keep it in mind as you consume news about the inevitable next massacre.

Safe2Tell, created in response to Columbine, is growing fast as a front line tool in school safety 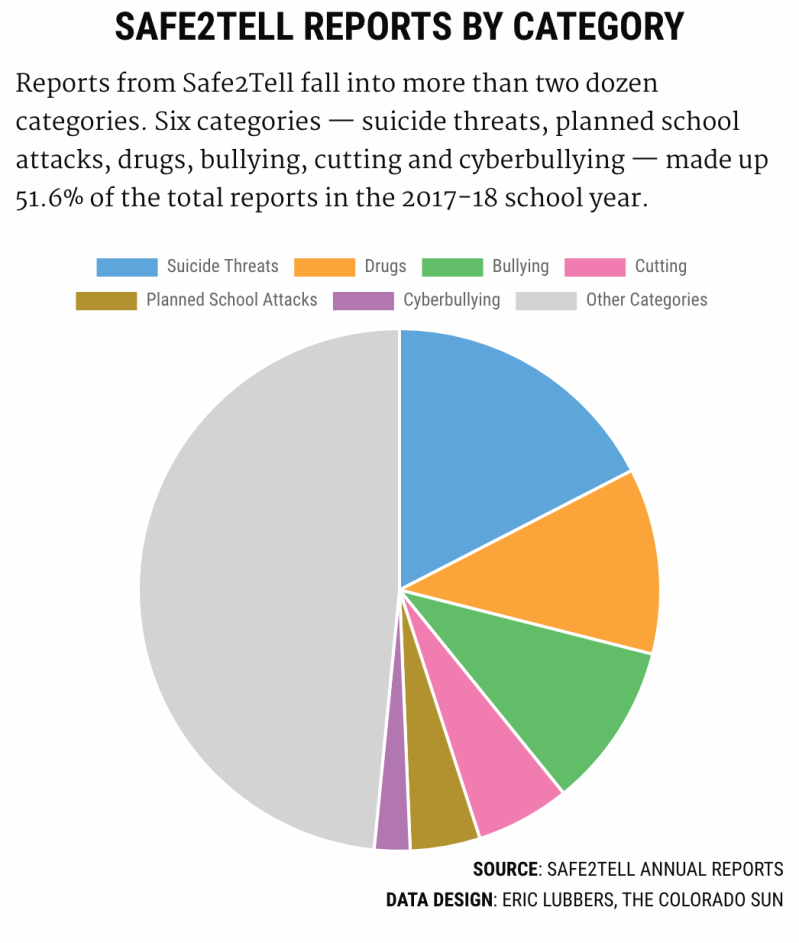 Kevin Simpson went behind the scenes of Safe2Tell, Colorado’s anonymous school safety tipline created after Columbine. In his report, find out why use of the service has spiked in recent years, how the system deals with fake tips used to harass students and the way the service has evolved to encompass all students in crisis, not just those threatening violence.

ALERT: Gov. Jared Polis will sign the red flag gun bill today at noon. Look for our coverage later at coloradosun.com on what’s next for the contentious measure.

Cody Townsend at the top of a run on Joffre Peak in British Columbia, Canada. (Bjarne Salen, via @codytownsend on Instagram)

If you feel like raising your heartrate a little (or giving yourself a mild panic attack), you’re going to want to see Cody Townsend’s videos. Jason Blevins caught up with Townsend, who is attempting to ski North America’s 50 “classic lines” in three years, even as he worries that climate change will make some of his trips “last descents.”

>> Get some vicarious thrills with his interview here.

(This story first appeared in The Outsider, Jason Blevins’ premium outdoor newsletter from The Sun. Check out coloradosun.com/theoutsider for more on how to subscribe).

// Drew Litton on the Columbine anniversary.

// What’d I Miss gives Ossie something to look forward to.

This week’s SunLit feature is a nonfiction book, and one we probably all could use. Colorado investment adviser Chad Gordon’s clients often asked him for books they could read to get a better idea of how to handle money. But after years of being dissatisfied with the offerings, he wrote his own, “Wealth by Virtues,” that gave not only holistic, easy-to-understand financial advice, but connected it to philosophy of living a good life. Check out an interview with Gordon and read the introduction to “Wealth by Virtues” here.

The Craft Brewers Conference ended Thursday, but the great beer is still flowing. Head to Finn’s Manor in Denver anytime after 2 p.m. to try Oxbox Brewing. I visited the Portland, Maine, brewery a couple years ago and left with a deep appreciation for the refined subtlety of their farmhouse ales. It’s an old-world style that never gets old. The brewery doesn’t distribute much in Denver, so this is your chance to try their beer.

// Remember our investigation into the $231 million failure of the READ Act from January? A bill to modify the act has been introduced and amended at the statehouse. Erica Metzler has the details of the bill and what’s been changed. // The Colorado Sun, Chalkbeat Colorado

// I love the histories of neighborhoods and deeply enjoyed last year’s 99 Percent Invisible episode about the rise of Chinatowns in major cities around the country. I had heard a few references to Denver’s Chinatown (specifically “Hop Alley”) but this piece by History Colorado is a fascinating look at a dark time in Denver’s history — with some lessons to be learned about blaming immigrants for larger social problems. // History Colorado

// Ben Markus published the results of a months-long look at the deep relationships between Denver Mayor Michael Hancock and three of the biggest lobbyists in the city. // CPR News

// Speaking of the Denver mayoral race, Michael Roberts over at Westword talked to musician and activist Kayln Heffernan about what she called “dehumanizing” coverage of her race to challenge Michael Hancock. // Westword

// Interstate 76, aka the pipeline between my homelands in the Eastern Plains and the Front Range, shuts down during almost every snow storm. Reporter Noel Brennan breaks down why that stretch of highway is so vulnerable to shutdowns. // 9News

The Thing: The future of ding-dong ditching (watch on Twitter)

Why You Might Like It: I’ve just scratched the surface of the very ambitious New York Times “Privacy Project” which details all of the ways, large and small, that we’ve given up our privacy to private companies and the government — including the use of doorbell cameras like Nest that can have you under surveillance even if you don’t own one (thanks, neighbors!). But even grumpy, skeptical ol’ me can set those concerns aside to watch video of a kid doing what kids do best (adapting literally anything around them into entertainment) and ushering in a new epoch of tech-assisted harmless pranks.

All right, that’s it for this Friday. If you can’t get to all the great journalism in this newsletter today, maybe keep it around for the weekend. We promise — as with all Colorado Sun stories — that every word is worth reading. That’s our mission.

In the meantime, don’t forget to make the plunge and become a Colorado Sun member to help us reach that membership milestone we mentioned above. If we get there by Monday, we will let you in on the big news.