Sunriser: Things getting weird at the Capitol, why you can’t buy some EVs in Colorado, cannabist lobbying triples, locals vs. ski pass holders and more

Your guided tour through Colorado news, compiled by your friends at The Sun

Good morning from the eye of the bomb cyclone!  “Bomb cyclone” has a very specific meteorological definition, so for most of the morning so far we were experiencing just a good old-fashioned blizzard. Over at CPR News, they built an entire website that I’ve been refreshing to let us know the second we actually cross into bombogenesis: isitabombcyclone.com. Update: Literally as I prepared to send this newsletter, the bomb cyclone officially hit the state. Congratulations, I guess?

But amidst this swirling, frigid tempest, I want to thank everyone who has participated in and evangelized our half-birthday membership drive. You’ve heard a lot from us lately, but all the offers (the free T-shirts, the discounted memberships, the Rockies tickets) are still active until 5 p.m. today. So if you or someone you know are on the fence, now’s the time to join. All the details are here.

OK, let’s drop this barometric pressure, shall we?

Things are getting weird at the statehouse 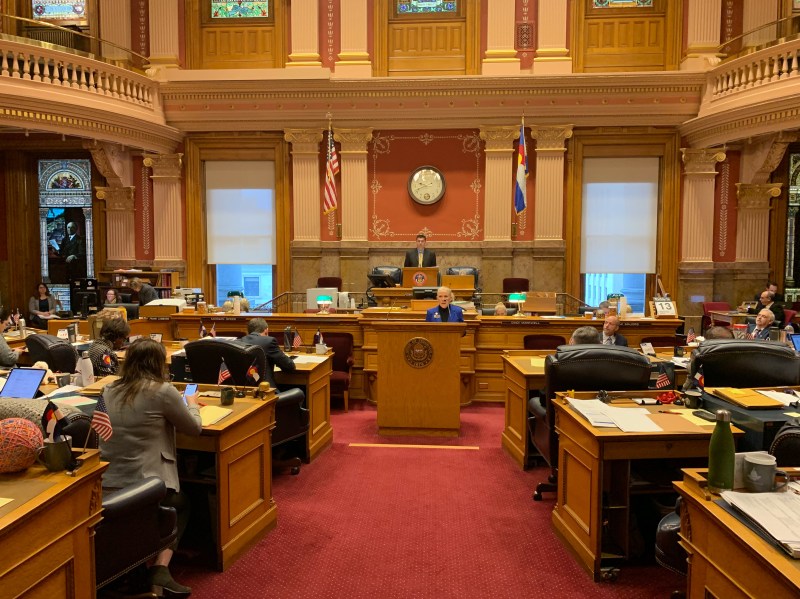 Sen. Vicki Marble R-Fort Collins, speaks in the Senate chamber at the Colorado Capitol on March 13, 2019. The Senate remains open while other parts of the legislature have shut down due to the storm. (Jesse Paul, The Colorado Sun)

Secession threats. A computer speed-reading a bill to an empty chamber (leading to a judge issuing a restraining order to make a human do it). Intraparty conflict over marquee legislation. And we’re only halfway through the session. John Frank and Jesse Paul take a thorough look at the tension rising as the legislative session heats up.

>> Read the whole story, including what’s left on the Democrats’ ambitious agenda, here.

>> MORE: Jesse Paul has the details on the unprecedented effort by the GOP to slow proceedings and how it ended up in court.

>> RELATED: The Colorado House is closed because of the weather. But in the Senate, lawmakers just finished the chamber’s final hearing for the controversial, omnibus oil and gas bill on Wednesday morning. It passed, 19-15. Keep an eye on coloradosun.com for the latest, in the meantime, here’s what to know about the measure.

Colorado is a big electric vehicle market. So why can’t locals buy the latest models?

Colorado already punches above its weight when it comes to buying electric vehicles (we’ve got the Kelley Blue Book numbers to prove it). But when it comes to some of the latest models from some of the biggest carmakers in the world (Hyundai, Fiat, Honda), Coloradans haven’t been able to even take a test drive. Tamara Chuang crunched the numbers around EV sales in the state and talked to people all over the industry to find out why. Plus, a glimpse at electric SUVs and zero-emission pickups coming soon.

>> Read more, including when you can shop for an all-electric pickup, here.

It’s a big year for the cannabis industry in Colorado. Five years into legalization, a number of major regulations are sunsetting; former Gov. John Hickenlooper, who had vetoed legislation in the past, is off chasing the presidency; and pro-marijuana governor Jared Polis is in office. So it makes sense that the now multi-billion-dollar industry is starting to flex its power in the statehouse. Sandra Fish dove deep into lobbying numbers and talked to people around the industry to see just how much money is spent and what the industry’s targets are.

>> Read more, including how what happens this year in Colorado could echo around the country, here.

Very few Colorado workers get paid time off to care for a new baby or take care of a sick family members. That much hasn’t changed since Jennifer Brown’s look at family leave in Colorado was published last month. But as the proposal brought by Democrats gets its first hearing in the statehouse Wednesday, business leaders are starting to unify in their opposition to it. Jen lays out the arguments by the Colorado Chamber of Commerce as well as supporters who say the move is both affordable and necessary.

🚨🚨 A quick, exciting note for current members: You now can add a password to your Colorado Sun account (this will come in handy when logging in on your phone or browsing Facebook). Just visit this link, hit “Edit Profile” and then look for the password option. 🚨🚨

// Saja Hindi examines the “downpour” of cases hitting Colorado courts, with judges double- and triple-setting cases, and how a bill headed to the governor will hopefully bring reinforcements. // The Denver Post 🔑

// This is a bummer. Michael Bartolo, one of the “founding fathers” of the Pueblo Chile is worried that the Arkansas River Valley may not be able to support agriculture in the long term. // Pueblo Pulp

// Now that’s a headline: “LEAVE IT TO TIPPIE: Nationally-renowned beaver trapper recalls decades of tales.” Now, when someone says, “I wonder where North America’s best beaver trapper lives?” you can confidently say with pride, “Denver!” (A note for those concerned for the beavers, she’s a live-trapper.)  // The Aurora Sentinel

// I witnessed my first Colorado lane-splitter (with California plates, obviously) on Speer Boulevard yesterday, which already had me thinking about motorcycle laws. This is an interesting one: A bill would allow motorcycles to pass through red lights under very specific circumstances involving ground sensors that can’t feel the weight of a bike. // 9News

// The next big labor action in Colorado could be at King Soopers. Union workers will begin voting tomorrow on whether to strike for the first time since 1996. // Westword

// An avalanche near Frisco significantly changed the view for residents, leaving a wide white scar below Mount Victoria. So turning lemons into frosty lemonade, locals are trying to name the new path (with a pretty solid “Clerks” reference leading the pack). // Summit Daily

// This doesn’t happen often: A housing activist and author is actually praising efforts being made by Denver to deal with the housing crisis. // Denverite

// I just signed up for Class Pass (still haven’t actually booked a single session yet, though) but it’s good to know that local gym owners don’t hate the app. // BusinessDen

// First, there was “Denverization.” Now, up in Aspen, there’s “Colfax-ification.” // Aspen Times Opinion

// The racist group that has been ramping up its presence in Colorado has ceased operations … just to rebrand itself and relaunch. // Westword

Why You Might Like It: It’s going to be a cold, windy mess by the time you settle in for the night, so why not warm up by watching one of the best stand-ups and comedy writers out there just crush it on stage for an hour or so? If you’re not already familiar, you may know John Mulaney as the voice of Spider-Pig from the Oscar-winning “Spiderman: Into The Spider-verse,” or as a voice on Netflix’s “Big Mouth” or from his failed self-titled sitcom or “What’s That Name?”, the only good Saturday Night Live skit in the past several years. He’s just really good at what he does, which is “be incredulous and extremely funny at almost all times.” Don’t worry, if you like this one, he has two other specials on Netflix you can ride out the storm with.REMINDER: If you have something that you just can’t stop raving about that you’d like to share, send us an email at things@coloradosun.com and you could be published in a future Sunriser!

Well, I can tell you’re nervously eyeing the nearest window by now, so we’ll sign off here.

Don’t forget there are a few hours left in our half-birthday celebration (ending at 5 p.m. today) and the accompanying discounts and perks, so dive into a membership if you haven’t already at coloradosun.com/join (code: 6MONTHS) and send it over to your friends, family, neighbors, snow plow drivers and anyone else you think would like to support local journalism.

Stay safe, stay warm and stay off the roads if you can help it. We’ll see you back here on Friday.

Energy
The Associated Press
1 hour ago