Good morning! Hopefully you’re reading this from somewhere warm and safe (and off the roads) because most of this state got walloped with a layer of fine, soft snow last night, and, as of this writing, it hasn’t let up much.

If you’re heading into the backcountry soon, remember that all this wet, thick snow will be resting on the layer of “rotten snow” that developed in October, which means that even moderate avalanche danger can be deadly. Stay safe out there.

OK, let’s stomp these boots already, shall we?

Greeley has three brand new skate parks, and it’s all part of the (urban) plan 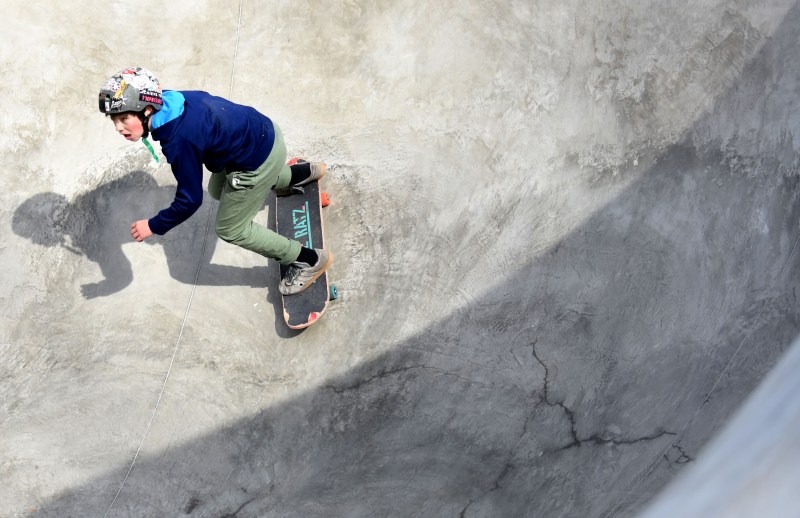 Shadows begin to stretch across the Centennial Skate Park, 2201 23rd Ave., in Greeley as Tyler Lundstrom, 13, rides through the afternoon. (Josh Polson, Special to The Colorado Sun)

As a kid growing up on a gravel street in northeastern Colorado, skateboarding physically wasn’t much of an option, no matter how much I played Tony Hawk on my friend Paul’s Playstation. And when Yuma’s “skatepark” opened, it was the kind of cheap metal ramps that Dan England not-so-affectionately describes as “pancake griddles” in this story of how skaters came together to make high-quality skate parks a prominent part of Greeley’s urban planning priorities. Skating on the Eastern Plains has come a long way. >> STORY + EXCELLENT PHOTOS

Colorado, you can breathe easy knowing that 67 of the state’s presidential delegates for the Democratic Party will be chosen via a primary vote, not a caucus (the confusing process currently roiling Iowa). But just because it’s an all-mail vote doesn’t mean the results will be instant. John Frank explains the whole process. >> EXPLAINER

What a viral photo says about Michael Bennet’s presidential campaign in Iowa, and his chances in New Hampshire 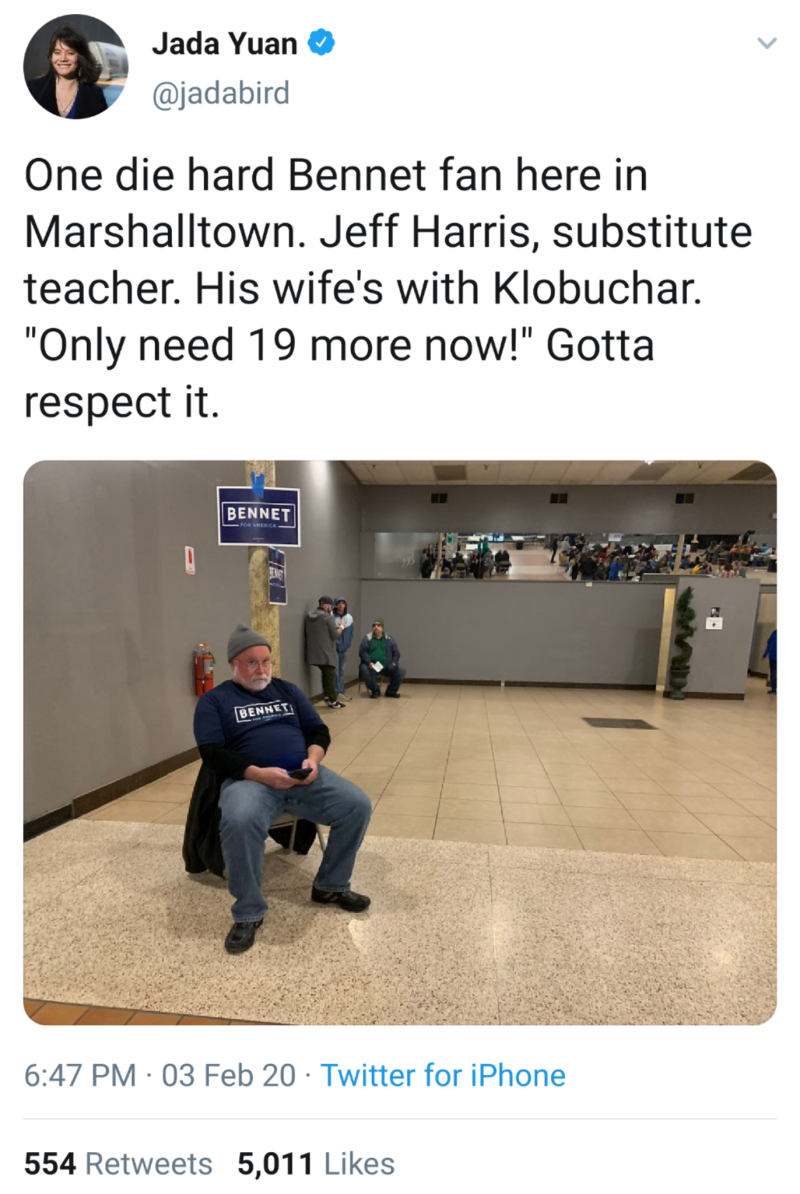 Speaking of Iowa, Sen. Michael Bennet’s long-shot campaign didn’t spend much time there lately, choosing instead to use its resources in New Hampshire. But that didn’t stop a lone delegate from showing up in Marshalltown and creating a viral mini-sensation. John Frank talked to 63-year-old Jeff Harris about why he threw his lot in with Bennet, and what the rest of this primary looks like for Colorado’s senator. >> STORY + ANALYSIS

+ COLORADO AT THE CENTER OF DEBATE OVER ELECTION REFORM: Our state is at the center of a larger debate about how we choose politicians in the United States. Sandra Fish looks at the national popular vote, majority voting, ranked choice and many other methods being tested for possible use in Colorado. >> EXPLAINER + GUIDE

+ + BERNIE’S BIG JANUARY WILL BRING ADS TO COLORADO: Bernie Sanders says his campaign raised $25 million in January, and some of that money will go toward ads in Colorado and other states.

“I think that people who have seen combat have a comfort in their own skin doing anything, in taking anything on.”

Freshman U.S. Rep. Jason Crow, D-Aurora, was thrust into one of the highest-pressure assignments on Capitol Hill: Managing the contentious impeachment of a sitting president. Jesse Paul got a behind-the-scenes look at the impeachment trial from Crow and lead manager Rep. Adam Schiff, including details on playlists, combat experience and Crow’s son’s fish tank. >> STORY + PHOTOS

+ IMPEACHMENT VOTE ROUNDUP: As expected, Sen. Cory Gardner — who last week said that new witnesses and documents were “not needed” — voted to acquit President Trump, saying that the House “failed to do the fundamental work required to prove its case.” Sen. Michael Bennet voted to convict.

+ + GARDNER TO JOIN TRUMP IN COLORADO SPRINGS: President Trump will be coming to Colorado Springs on Feb. 20, and Gardner will join him to “tout all the great accomplishments they have delivered to Colorado.”

We’ve written a lot about how the outdoor industry is starting to flex its muscle on the national stage. But through the Outdoor Recreation Roundtable, a coalition of 30 trade associations, its voice is starting to come together. Read Jason Blevins’ Q&A with executive director Jessica Wahl for a glimpse at the power of the united industry. >> Q&A

Black Project Spontaneous and Wild Ales is always making funky and nuanced beer. And the brewery on South Broadway in Denver is celebrating its sixth anniversary Saturday. If you arrive when they open at 4 p.m. you can try Backfin, a maple hazelnut sour ale, one of seven new beer tappings throughout the day. 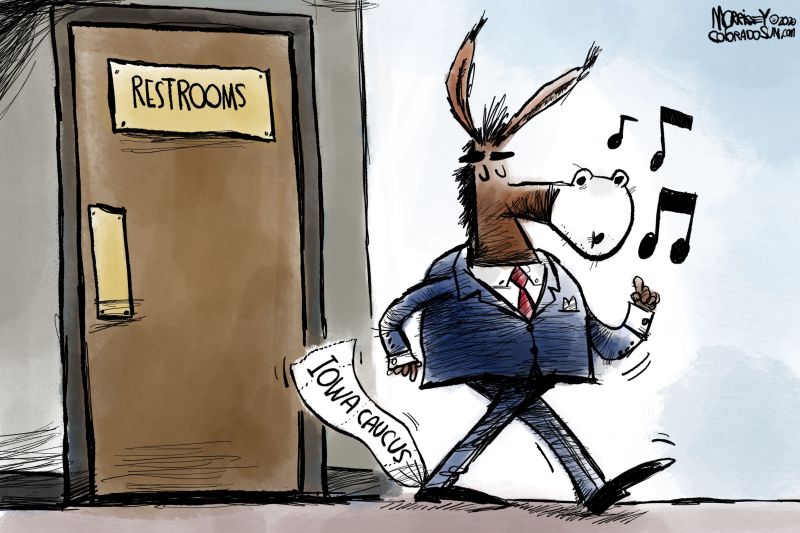 // Like all our cartoonists, Jim Morrissey likes to stick to Colorado themes. But this time, Iowa put an image into his head that he just couldn’t shake. And once we saw his rough sketch, we granted him an exception. 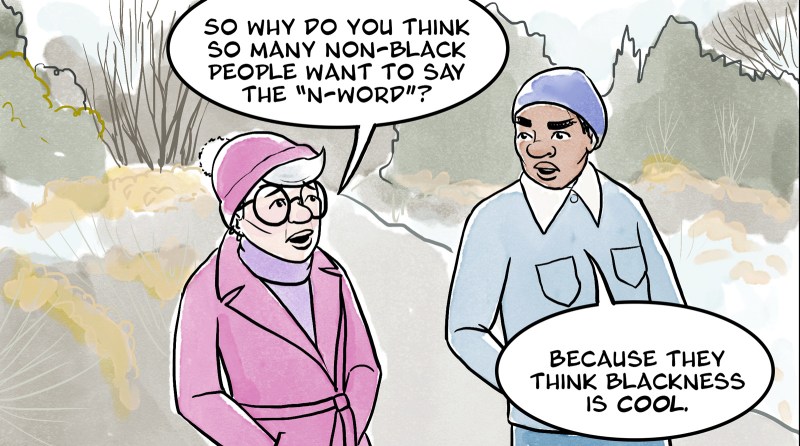 // You’ve heard debate about the N-Word before, but in this week’s”What’d I Miss?” Ossie — using his friend’s Polish family as an example — helps Myra understand who gets to use powerful words (no matter how “cool” people think they are).

// It’s hard to believe — after the season the Broncos had — that things actually got worse in the postseason.

The Amache internment camp near Granada, like those at nine other sites in the U.S., holds memories of a generation of Japanese Americans who were unjustly rounded up and imprisoned after Pearl Harbor. So authors Denny Dressman and John Elliff set out to tell the story of what happened afterward — how so many of those held there went on to pursue, and achieve, the American Dream. But the backstory of the camps provides the context that makes what came after even more remarkable. In the interview, Dressman tells how the project came together.

// LIFE ON THE EDGE FOR LOCAL DACA KIDS: A young woman from the University of Northern Colorado has made her way through school on scholarships and now stands only months away from a human services degree. She wants to continue her education and become a physician’s assistant. One thing stands in her way: She was born in Acapulco, and now the lingering uncertainty over the immigration status of DACA kids has her hoping for the best. // Greeley Tribune

// BRAIN DRAIN IN PUEBLO: The classified employment ads say it all. Few job postings in Pueblo require more than a high school diploma, leading many young people to move away — never to return — to seek more challenging lives elsewhere. // PULP

// THE DRONE INVESTIGATION GOT WEIRD: All you need to know to get hooked into this story is: space potatoes. A behind-the-scenes look at the investigation into the mysterious drones reported over northeastern Colorado. // The Denver Post

// 4-YEAR-OLD DIES AFTER MOM GETS ADVICE FROM ANTI-VAX FACEBOOK GROUP: A Pueblo boy died from the flu, marking the second child death this flu season in Colorado. His death is receiving national attention, though, because his mother appears to have consulted an anti-vaxxer Facebook page for advice about treating him with home remedies rather than the medicine a doctor prescribed, and the family is now asking for compassion, not criticism. // KKTV, NBC News, KDVR

// RURAL MENTAL HEALTH STRUGGLES IN JAILS: Colorado’s rural jails have a difficult time dealing with inmates who have mental health issues. The Rio Grande County Jail is a case in point. “We have to take them and transport them all the way to Denver,” county undersheriff Ed Raps said. “That’s on our dime.” // Rocky Mountain PBS

If you heard that there was a piece of technology that could do away with traffic jams, make cities more equitable, and help us solve climate change, you might think about driverless cars, or hyperloops or any of the other new transportation technologies that get lots of hype these days. But there is a much older, much less sexy piece of machinery that could be the key to making our cities more sustainable, more liveable, and more fair: the humble bus. 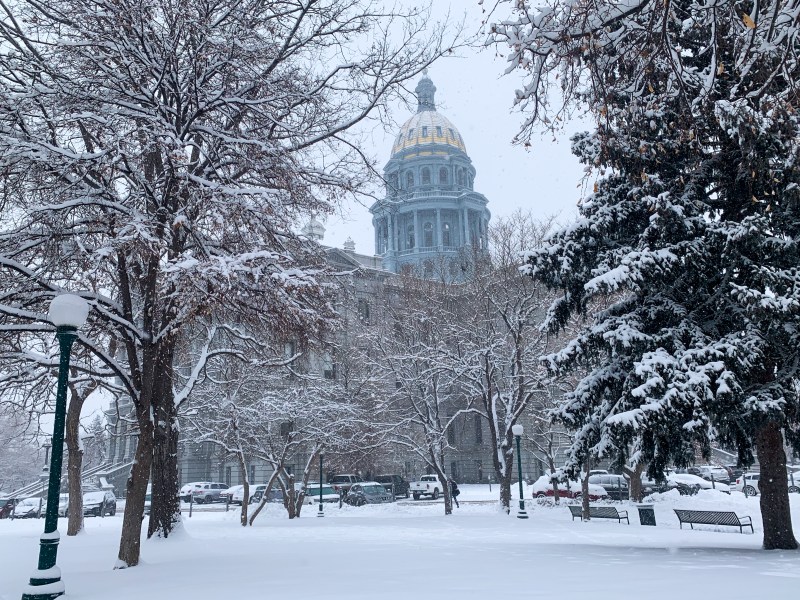 Be safe out there this weekend. The roads around Denver are nasty, I-70 through the high country is a nightmare and it’s a perfect day to stay in and catch up on some Colorado Sun stories.

We’re a little biased, but we think our journalism pairs really well with coffee, hot chocolate and tea.

Let us do the work for you, Colorado. Have a great, safe weekend and we’ll see you back here to kick off next week.