With rain (and then snow) in the forecast on this side of the Continental Divide, today might be a good day to go stock up on supplies so you can cook something delicious while the storm rages outside. And if you read the stories in today’s newsletter, I promise you’ll be thinking a little harder about our global food system as you wander down the grocery store aisles.

Let’s shave this beard already, shall we? 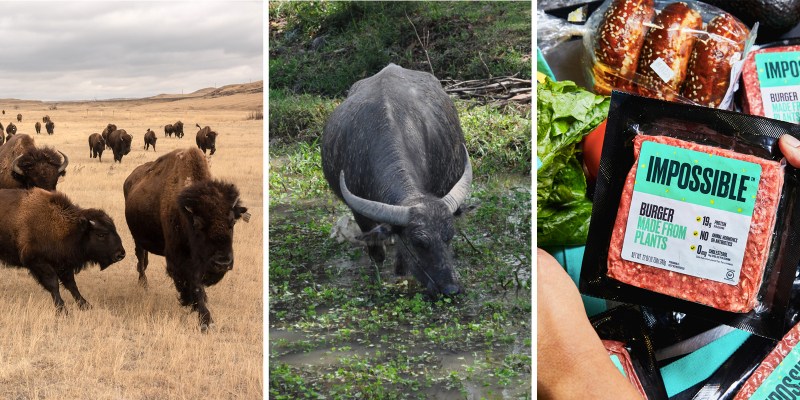 — The cost of a hamburger patty cultured from animal cells in lab seven years ago. Now the same patty costs about the same as a Whopper.

While beef is still what’s for dinner on many Colorado tables, the ranching industry says it is beset on all sides. On one hand, meat consumption is slowing as alternative plant-based products and habits like Meatless Monday gain a bigger market share. On another, bison ranchers (still relative newcomers to the game) are worried that lower-quality water buffalo from India will turn consumers off of anything on a menu called “buffalo.” One solution to both problems, they say? More stringent labeling.

STORY AND PHOTOS: Monte Whaley digs into the battle over labeling — for everything from Petri dish beef to the “buffalo” in your fancy gourmet dog food.

BISON FACT: There are about 400,000 native bison in the U.S. and Canada, some of which are raised as livestock. In India alone there are over 100 million water buffaloes.

“When I think about what agriculture is when I was coming out of high school and colleges, I had an idea. It was always farmers. But we need statisticians, engineers and app developers. We need a lot of things that aren’t even jobs yet.”

— Kristin Kirkpatrick, executive director of the Center for Enhanced Workforce in Agriculture

While we’re talking about the future of food, no matter if you’re an omnivore, vegetarian, pescaterian or vegan, the one thing in common with your food supply is that someone, somewhere, has to pick or harvest or catch or process the food first. And with a population poised to grow 35% in the next 30 years, a group of Big Ag companies, researchers from CSU and nonprofits are coming together to think the big thoughts.

STORY: Tamara Chuang looks at how Colorado sits at the intersection of labor, science and nutrition in one of the world’s oldest industries.

“What I really want to learn is to keep up with what is current today. How to use Zoom. How to do video. How to take music and transform it. Things like that. I don’t want to be left behind.”

Colorado’s older residents are working longer and retiring later, and they already know how to use email, thank you very much. As the state’s population ages, older workers are demanding a whole new set of skills to keep up with more advanced technology, from video editing to setting up their own Etsy shops.

ANALYSIS: Tamara Chuang talked to organizations around Colorado that are putting on advanced classes and fighting ageism — starting with discouraging the use of the word “senior.”

Water crisis looms if Colorado fails to meet its legal obligations to other states, study warns 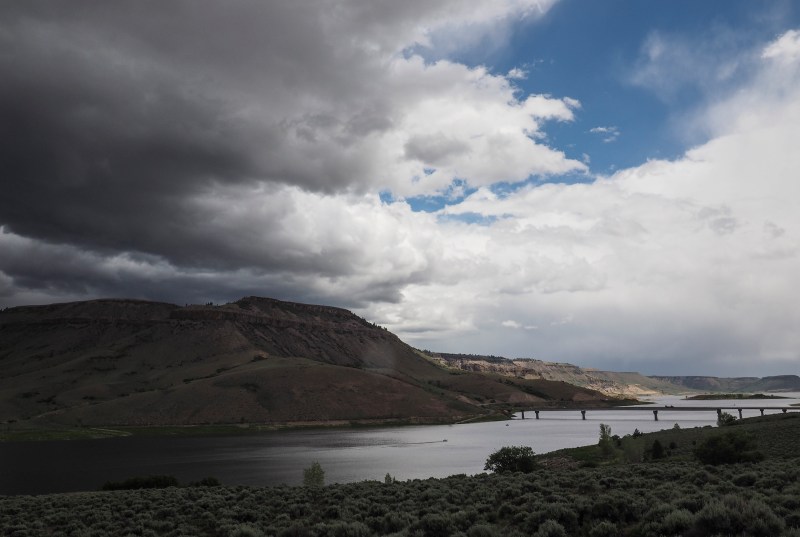 REPORT:  Fresh Water News editor Jerd Smith walks through the new report, including how small changes in water usage could affect “every water user in every river basin in Colorado.”

More Colorado workers will get breaks, must make $42,500 salary to be exempt from overtime under draft policy 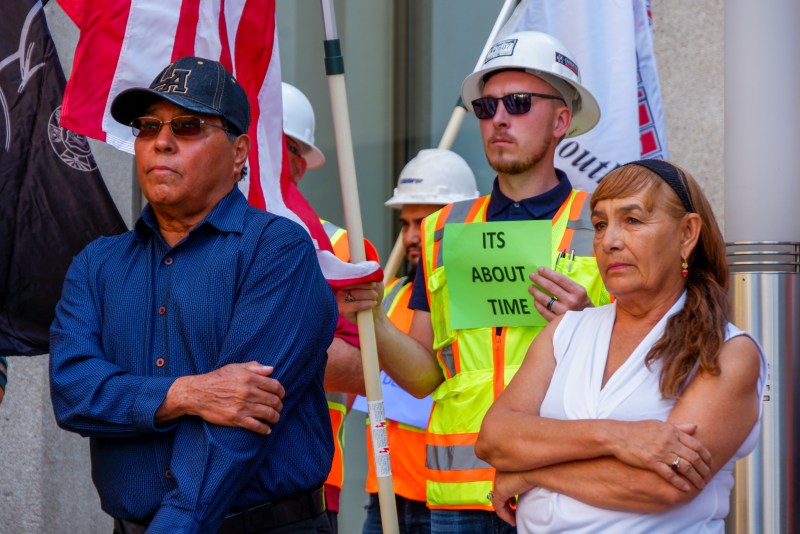 Rafael Cueto Rios, left, stands with his wife and a group of workers outside of the Colorado Department of Labor offices in downtown Denver on Aug. 28. The group was calling for Colorado’s minimum wage laws to apply to everyone. (Jesse Paul, The Colorado Sun)

This summer, we reported on how Colorado’s minimum wage rules (which also govern overtime rules and lunch breaks) don’t apply to thousands of farm, construction and other low-wage jobs. Now, in a major win for Colorado labor groups, the state has released a new draft policy that will make big changes for those workers.

ANALYSIS: Jesse Paul breaks down the changes, including who qualifies and who is still left out. 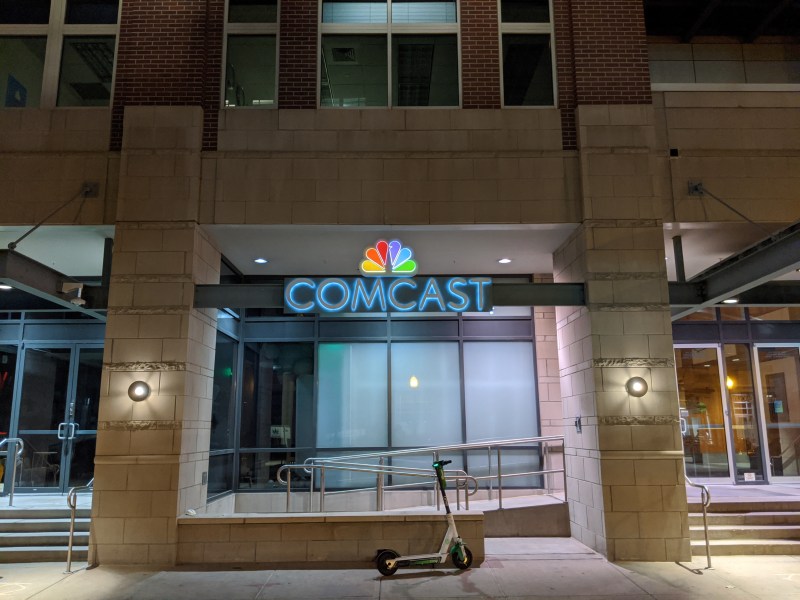 // Brian Maass has a blockbuster story: The lead Aurora police detective in the Aurora theater shooting confessed to overtime theft and lying during his time working for an FBI terrorism task force, but federal authorities declined to pursue criminal charges. // CBS4

// New Belgium Brewing, the standard-bearer for employee-owned, independent craft brewing in Colorado, will be 100% acquired by the Kirin global beverage empire. The Coloradoan has an excellent wrap-up of why it’s happening, what will change at the company and the history of New Belgium in Fort Collins. // Coloradoan

// DIA marked 24 straight months of breaking passenger records, and there’s no sign that the airport is slowing down. Here’s a behind-the-scenes look at what DIA looked and felt like on its busiest day ever this July. // 9News, The Colorado Sun

// If you see an outdoor cat in Fort Collins, they are breaking city code. // Coloradoan 🔑

// “Everyone in Colorado should be concerned about that water.” The massive JBS meat processing plant in Greeley broke state and federal regulations with its water discharges for five years. // Denver7

// In a more pleasant water-based story, the Leadville fish hatchery (which grew the majority of fish I consumed in my childhood) is looking for donations to replace windows in the 129-year-old building that is still in use today. // Summit Daily

// REMINDER: Zipper merging is faster for everyone on the road. // Aspen Times

// There will be no zipper merging at the Lone Tree In-N-Out Burger, where plans call for a drive-thru that can handle 26 cars at a time. // The Denver Post 🔑

// Sentinel editor Dave Perry has an opinion column excoriating the Aurora police department’s use of what he calls propaganda “docu-dramas” — scripted, edited videos released by police addressing police shootings instead of raw footage or answering questions from reporters. // Sentinel Colorado

// We’ve been covering Colorado’s legal actions aimed at Purdue Pharma for their role in the opioid crisis. But while the company is claiming to have learned its lesson and has declared bankruptcy here in the states, another Sackler family-owned company is using the exact same false claims and high-pressure techniques to push OxyContin in China. // The Colorado Sun, The Associated Press

// This is a super-cool graphic showing off how Mile High Stadium is dwarfed (from an elevation perspective) by Mexico’s Estadio Azteca where the Chiefs beat the Chargers on Monday night. Don’t tell that guy from Philly who whined about Denver’s “high-altitude” home field advantage.  // ESPN, Denverite

Why You Might Like It: Lately I’ve been trying to cook more interesting stuff at home, now that the weather is consistently cool enough to turn on the oven in my apartment. You can cook (and especially bake) without access to a little kitchen scale, but when they cost less than $10, why would you want to? I finally replaced my broken scale earlier this month, and everything from brewing Mark Bittman-approved coffee to baking a batch of almost-savory Peanut Butter-Miso Cookies made me realize how much I missed it while it was gone. If you don’t have one, get one. If your kids or friends don’t have one, buy one for them. There’s no need to suffer with inaccurate measuring cups anymore.What’s your thing? Send us an email at things@coloradosun.com and you could be published in a future Sunriser!

The old cliché “do one thing every day that scares you” is a little bit of overkill. I’m not sure that we need daily comfort zone-busters to live a properly examined life, but the overall sentiment has value.

This is a roundabout way to say that last night I shaved the beard that I have had every day since the waning days of the Bush administration. If you know me or have met me in person, you’ll understand how monumental that is.

Why do you, the Sunriser reader, care about my facial hair? Because the idea of shaving it had been stuck in the back of my head for weeks, if not months. And I can’t tell you how great it felt to finally just do it (even if I’m immediately growing it back).

And I know that for at least a few of you still reading this, you’ve been thinking about becoming a member of The Colorado Sun for just as long.

So I’m asking any of you who still haven’t yet taken the plunge to stop what you’re doing right now and head over to http://coloradosun.com/join to start your membership. Don’t put it off, just do it right now.

It only takes a few minutes and as little as $5/month to support the kind of news organization that can tell you about fake meat, labor law, peanut butter cookies and complicated water rights all in a single newsletter.

Have a great day, and I’ll see you right back here on Friday.