BREAKING NOW: The long-awaited report on sexual abuse by Catholic priests in Colorado has been released, and it details decades of abuse and inaction by Colorado’s three dioceses, with at least 166 children victimized since 1950. Jesse Paul and Jennifer Brown have the full story on the report and its findings here.

Good morning! It’s a Wednesday, there’s some snow on the horizon for much of the state, and we have a shipping container’s worth of news to get to today.

But first, time (and space) is running out for The Colorado Sun Book Club’s first event at BookBar in Denver! Register here to reserve your space, and don’t worry, you’ve still got time to pick up “Mister Tender’s Girl” before (I’m currently listening to the audiobook version). But you don’t, and I can’t stress this enough, have to have read the book to come enjoy conversation with author Carter Wilson and hang out in a cool space with cool people.

And if you’re not a member of The Sun yet, just head to http://coloradosun.com/join and use the code BOOKCLUB and we will buy you a book at BookBar! It’s a win for everyone involved.

OK, let’s batten the hatches already, shall we?

John Hickenlooper, responding to the prompt, “By show of hands, has Trump committed an impeachable offense?” at a forum in Montrose on Oct. 20, 2019. (William Woody, Special to The Colorado Sun)

The question was straightforward — “By show of hands, has Trump committed an impeachable offense?” — and hands shot into the air in a Montrose gymnasium. Except for the leading Democrat in the race to challenge Cory Gardner next November, whose response you can see above.

>> John Frank and William Woody analyzed not just the shrug, but how big questions about national politics are already shaping the race for Colorado’s Senate seat.

4 out of 5 Native American women are survivors of domestic or sexual violence. A Colorado Springs garden is helping them recover. 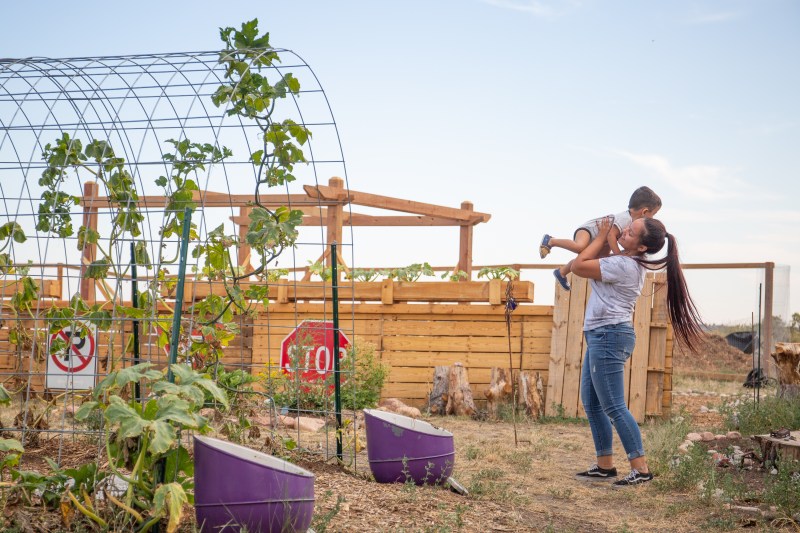 Monycka Snowbird’s daughter and grandson play in the Healing Garden on a hot September day in Colorado Springs. (Nina Riggio, Special to The Colorado Sun)

Colorado has a Native American population of 80,000 — and growing. Among them are women who disproportionately suffer domestic or sexual violence compared to other groups, and there are few resources available for those women that take tradition into account.

>> Nina Riggio has the story of Haseya Indigenous Healing Garden in Colorado Springs, where women can gather, garden and use traditional healing to change their lives.

How tiny Branson, through crowdfunding and new water tech, saved itself from drying up 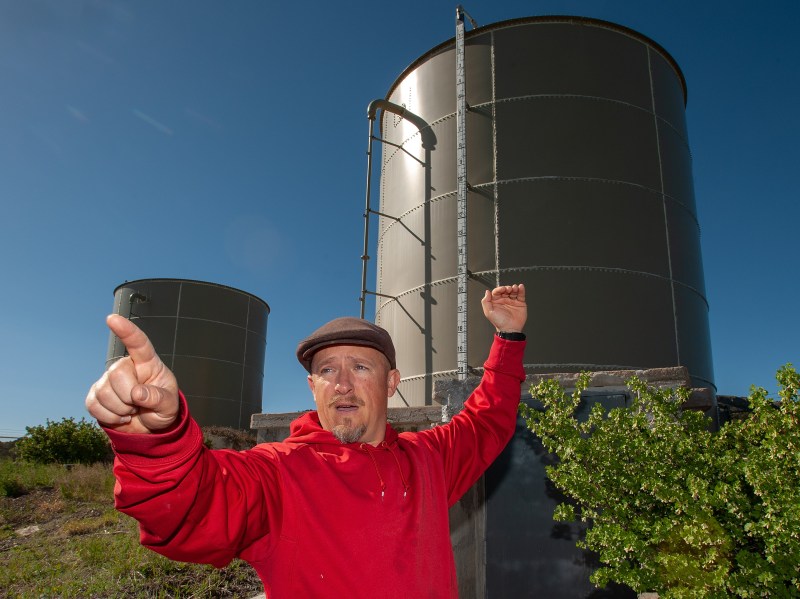 Branson Water Commissioner Brad Doherty explains how the town’s water system works in this May 1, 2019 photo. (Mike Sweeney, Special to The Colorado Sun)

New state regulations about the safety of groundwater suddenly put Branson, population 55, on the hook for a $1.2 million fix to use their nearby springs for water. But a year full of creative fundraising and some new filtration technology seems to have saved the town from drying up and blowing away.

>> Kevin Simpson has the story of the “unrelenting bootstrap mentality” that led to a small-town victory.

A Denver startup asks every potential investor: Have you faced sexual harassment complaints? 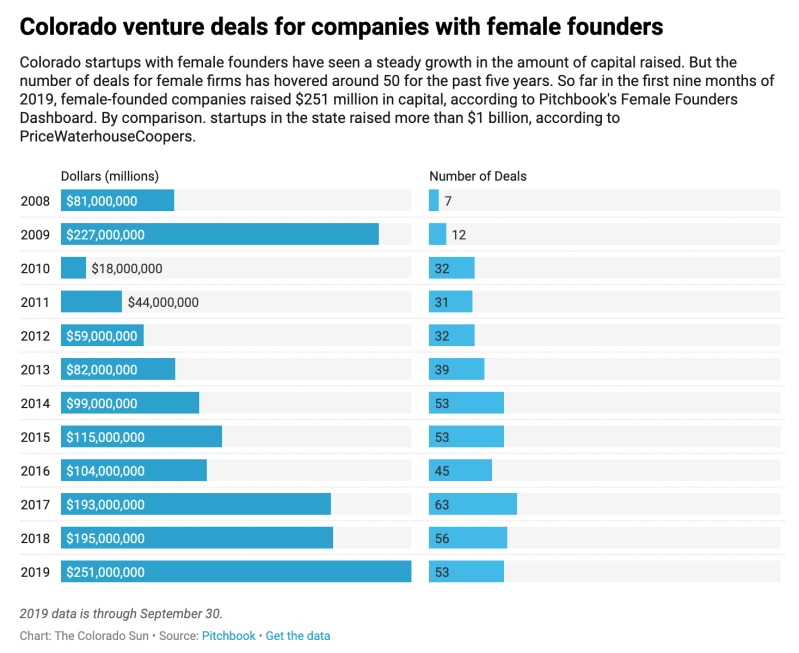 Startups owned by women already have a tougher time raising funding, and several high-profile male investors were publicly called out for asking inappropriate questions and generally creating hostile environments for female founders. But as Tamara Chuang writes, one Denver startup, Soona, is fighting back with a “Candor Clause.”

>> Read more about how Soona is keeping away creepy investors and get a look at the numbers behind women-owned startups in Colorado.

Colorado is bad at recycling, so lawmakers spent months looking for solutions. Here’s what they proposed. 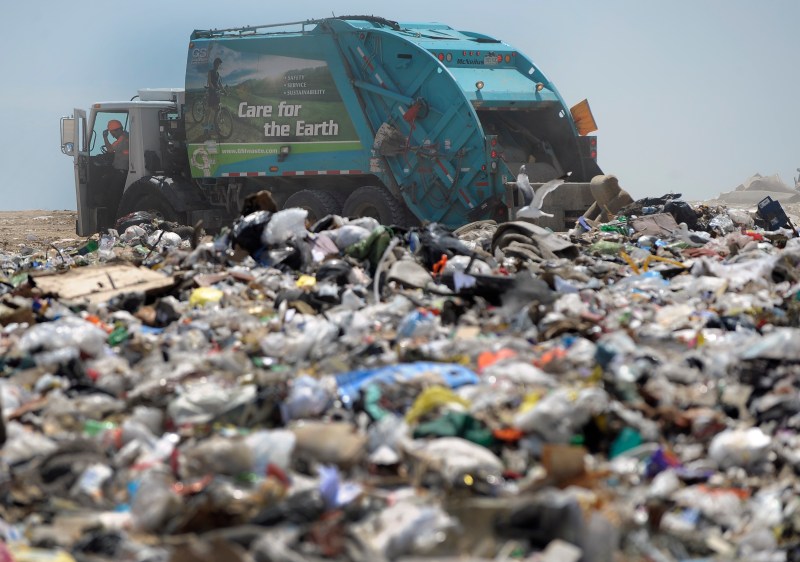 A trash truck dumps its load at the Larimer County Landfill in July 2018 outside of Fort Collins. The landfill is among those in Colorado nearing capacity. It will run out of space in 2024. (Kathryn Scott, Special to The Colorado Sun)

The national average recycling rate is 35%. Colorado’s rate is 17.2%. A committee tasked with finding legislation to boost that number deliberated for months on five draft bills — including more studies, a bottle fee, innovative composting infrastructure and more.

>> Moe Clark details the discussions, including which two draft bills actually made it out of the committee.

// Ski season is really, truly here. Loveland Ski Area will be open on Friday — no doubt boosted by the incoming snow. // Summit Daily

// RTD has started canceling morning light rail trains due to its ongoing driver shortage. Nathaniel Minor at CPR looked to history and found that a contract signed just as Denver emerged from the Recession (and right before the state’s economy took off) is hamstringing efforts to hire new drivers. // CPR News

// I don’t think an apple has been this hyped since the iPhone: Meet the Cosmic Crisp, a new variety of Washington apple that growers are treating like a hot new trend. // USA Today

// If you think fancy, regional-specific apples are just a Pacific Northwest thing, let me introduce you to the Colorado Orange — which, despite its name, is a kind of apple. Even cooler is the Montezuma Orchard Restoration Project, which is working to preserve all kinds of Colorado-specific fruit by selling trees and fruit. Just look at all these incredible apples (my favorite by sight alone is the Niedzwetskyana that sports almost entirely red flesh). // NPR (circa 2014), Montezuma Orchard Restoration Project

// Quite the headline from Motherboard: “Colorado might be the only state having a rational response to vape panic.” // Motherboard

// East Colfax Avenue was officially designated as “blighted” in August, kickstarting the old tension between the forces wanting to develop (and profit from) a neighborhood and the people who already live and work in it. // Denverite

// Sorry folks, the 1.36 million of us millennials are now the largest age group in Colorado, and we’re more diverse, a good chunk of us are transplants and we don’t make a lot of money (on average). There’s much more in this breakdown of the state’s now-dominant demographic. // 9News

// Not quite Colorado-related, but it looks like Kanye West — who bought the Monster Lake Ranch south of Cody, Wyoming — is beginning to buy up commercial real estate in the town of just under 10,000. // Powell Tribune

// Several U.S. state attorneys general will be coming to Colorado next month to talk about a possible antitrust case against Google. // Reuters

// Millions of dollars of federal funding is being withheld from local law enforcement agencies, including in rural areas of Colorado, because the states and communities are butting heads with the Department of Justice over immigration policy, leading to Colorado filing suit against the feds. // Durango Herald

Why You Might Like It: Yes, I know I mentioned this in the intro, but there’s never been a better excuse to — wait for it — bookend an email. The first book club meeting is going to be a blast. Not only is it going to be a bunch of book-loving nerds hanging out on a Monday, but some of the book-loving nerds on staff here at The Sun will be there, too. So once again, the details:

See you there!What’s your thing? Send us an email at things@coloradosun.com and you could be published in a future Sunriser!

It’s the middle of the week, and you’re probably pretty busy, so thanks again for making The Sunriser part of your routine. Tell your friends, family, co-workers, parent teacher associations and anyone else you think would benefit from a thrice-weekly shot of news to sign up for The Sunriser at http://coloradosun.com/newsletters. The more the merrier!

Have a great rest of your week and I’ll see you back here on Friday!