Mornin’, Colorado! Today is a magical day for, on this date in history, 15 long, innocent years ago, Oprah Winfrey gave everyone in her audience a car. To commemorate those much-gif’ed gifts, hang onto your knickers, Sunriser readers, because we are giving you … the news! You get the news! And you get the news! (Hey, at least the gift of news doesn’t come with tax liability.)

This has been a whirlwind week for all of us here at Sun HQ. Thank you to everyone who made our anniversary week so special and who makes the work we do possible. We truly are here to serve you, which means you get to boss us around a bit. If you have an idea for how we can do our jobs better, drop us a line at newsroom@coloradosun.com.

It’s also the final day of our anniversary membership drive, which means you just have a few hours left to get a discounted Sun membership. Join RIGHT NOW to make more news possible! Don’t miss out.

Now, this morning we’ve got a jam-packed Sunriser, a special announcement and a chill in the air that signals the best time of the year in Colorado has begun.

Let’s de-pill this sweater, shall we?

In the Aurora mobile home park where she lived for 16 years, eviction notices kept coming to Petra Bennett’s door — for unauthorized guests, lack of insurance, late rent. They were bogus threats to make the single mother leave. And eventually, she did.

More than 100,000 people in Colorado live in mobile home parks, the largest source of unsubsidized affordable housing in the state. But many of the parks are falling apart with age, investors eyeing redevelopment are circling, managers navigating the turmoil are frightened and residents, most of whom can’t afford to leave or to stay, are squeezed. In a first-of-its-kind effort, The Colorado Sun teamed up with more than a dozen news organizations across Colorado to tell stories from this frontier of the American Dream and answer a question: In a state with a five-alarm housing crisis from border to border, can mobile homes still be part of the solution?

Read the stories starting Sunday at coloradosun.com and partner publications. Here’s more on what you can expect from the series.

“There is this risk of enough states coming on board and the settlement gets crammed down.”

To Colorado Attorney General Phil Weiser, a settlement with Oxycontin maker Purdue Pharma worth up to $12 billion doesn’t come close to addressing the harm their drug has done across America. That’s why he is keeping Colorado out of the massive deal announced in federal court filings this week. But, if Purdue goes bankrupt, Colorado could find itself forced to take the terms of the deal, like it or not.

>> Read Jesse Paul’s interview with Weiser and learn why the lawsuit against Purdue might not be the end of Colorado’s opioid litigation.

++ MORE: While the state of Colorado, which sued Purdue in state court, hasn’t joined in on the settlement, more than 20 city and county governments in Colorado that sued Purdue in federal court are a part of the deal, though it’s still unclear what the settlement will mean for them.

Denver-area hospitals made a record $2 billion in profits in 2018, according to a new report

— The average profit margin, as a percentage of net patient revenues, for Denver-area hospitals in 2018, up from 18.1% the year before

Denver-area hospitals crossed a milestone last year: $2 billion in annual profits, according to a new report. And now, as hospital advocates defend the margins as a positive sign of sustainability, Gov. Jared Polis’ administration is gearing up for an epic battle over health care prices.

>> Read the story, by yours truly, and learn which hospital system had the biggest profit margin — and why it’s not quite as large as it seems.

Colorado plans to abandon its battle against the emerald ash borer 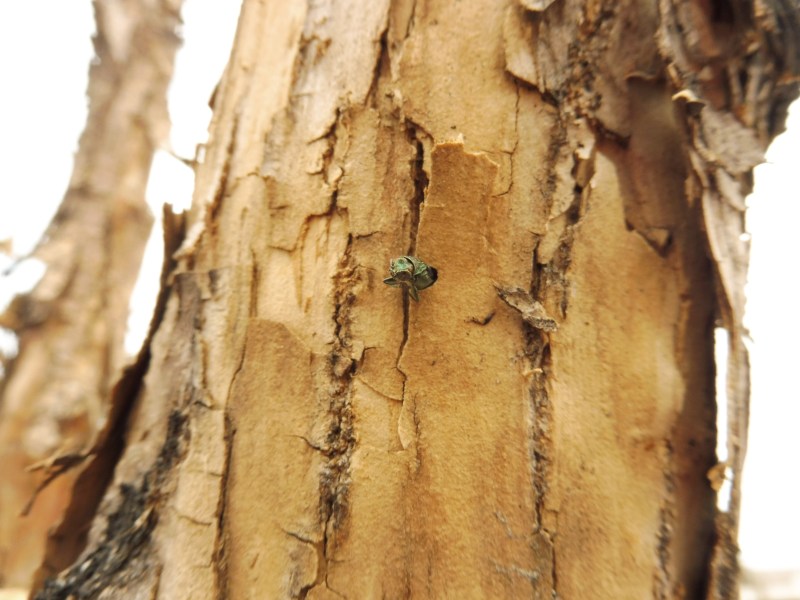 Colorado State Forest Service foresters confirmed on Sept. 11, 2019, that emerald ash borer had been found in the urban canopy in Westminster, the second confirmation in a month outside of the federal quarantine zone that includes Boulder County. The first confirmation was in Broomfield. (Photo provided by the City of Westminster)

This week’s announcement that state officials have found insidious emerald ash borers outside the Boulder quarantine zone is not the beginning of a new campaign against the bugs. It’s confirmation of the end. Across the state, foresters are accepting defeat in their effort to slow the ash borers’ march, meaning that when a bough breaks, it could be time for your beloved ash tree to fall.

>> Michael Booth, a Sun contributor, explains why, once you see an ash borer in action, it’s already too late and hears an all-time quote in the process: “Mother Nature is not nice.” 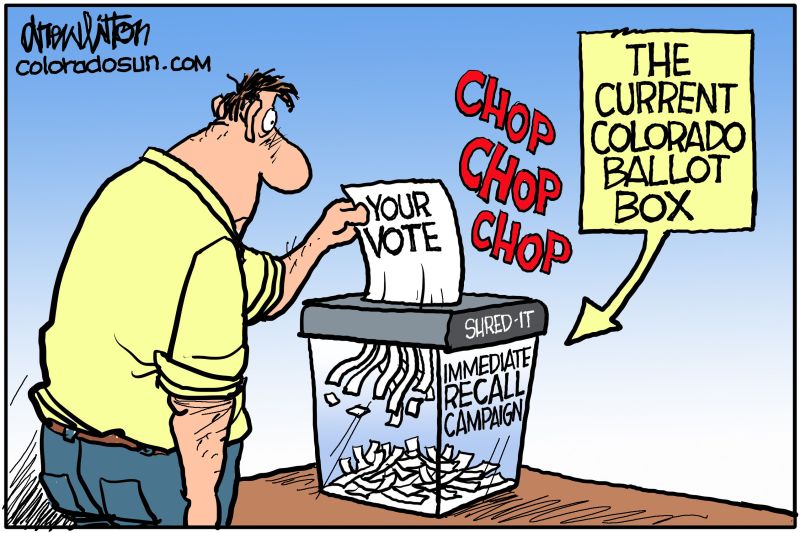 // Drew Litton will make you smile (though perhaps through gritted teeth) with his take on how well Colorado voters accept the results of our elections in a cartoon that makes The Sun’s recent story on recalls your next stop.

// You probably haven’t given a lot of thought to “Weird Al” Yankovic lately, but Myra has in the latest edition of “What’d I Miss?” And chances are, you will, too — in spite of yourself — once you’ve digested this week’s strip.

What happens when some goofy teen girls prod a friend to pose for some, ah, inappropriate photos at a sleepover? Every parent’s nightmare in the digital age. Author Donna Cooner explores reality’s two versions — life and the internet — in an excerpt from “Screenshot” that effectively ratchets up the tension even though you know full well what’s about to happen. And you’ll never guess what iconic movie inspired her to write this young-adult novel.

Passing through Fort Collins earlier this month, I finally tried the new version of Odell’s Mountain Standard. The “mountain-style IPA” is light and bright with tropical notes and impressively dry hopped three times. It quickly became one of my new favorites and is a rightful successor to the black IPA version we all came to love in prior years. Find it year-round in cans or on tap.

// In 1996, Sam Mandez was convicted of felony murder — based largely on a set of fingerprints and no other physical evidence — for a death that occured when he was 14 and received a mandatory sentence of life without parole. On Thursday, three years after a U.S. Supreme Court ruling that invalidated mandatory life sentences for teens like Mandez, he got a new sentencing hearing and a release date that could see him out of prison in four more years. Before the day was over, even the judge was in tears. // The Denver Post, The Colorado Independent

// When Vice President Mike Pence jetted into Aspen for a fundraiser earlier this summer, the security demands cost the local law enforcement agencies more than $18,000, an amount later covered by two donors. But did that violate campaign finance law? The answer is … no one really knows. // Aspen Times

// In Colorado Springs, Mayor John Suthers took the stage at his annual state-of-the-city speech to continued protests over the police shooting death of De’Von Bailey, which has gained national attention. But, in Rifle, the shooting death of a man police were trying to arrest for suspicion of child-pornography possession has received less notice. An autopsy released Thursday shows he was shot in the back. // The Gazette, The Glenwood Springs Post Independent

// Less than a century ago, amid the Dust Bowl and the Great Depression, Colorado tried to close its southern border to migrants — citing reasons that one scholar sees as having an eerie resonance in the present. // Colorado Public Radio

// It’s a classic Colorado story: Woman with a bear-hunting license wings a bear with a bullet, bear hobbles away, woman’s husband later stumbles upon bear and bear goes medieval on the guy’s hand and leg. I’ll let you click through on this one to see how it turns out. // The Durango Herald

// Speaking of wildlife — and other life in the wild — do you want the quickest possible rundown of which species in Colorado are considered threatened under the Endangered Species Act? Here ya go. The Trump administration has proposed new rules for how to handle threatened species. // High Country News

// It’s like that TV show “Succession,” except it’s about a bunch of rich people who own a football team in Denver. // The Denver Post

The Thing: “Unbelievable” on Netflix

Why You Might Like It: In 2011, while many of us were working at The Denver Post, our colleague Sara Burnett reported an astonishing story. A man accused of multiple rapes in the metro area was also suspected in a rape in Washington state, only there was a twist. Police at first hadn’t believed the victim in the Washington case, and she’d been charged with false reporting and paid a fine. Four years later, reporters for ProPublica and The Marshall Project picked up the trail and wrote “An Unbelievable Story of Rape,” which won a Pulitzer Prize for its description of the ways the criminal justice system can fail victims by not believing them. And, now, Netflix has made a fictional series based on the story. Full disclosure: I haven’t watched it yet. But Toni Collette and Merritt Wever play characters based on two metro-area police detectives, so it’s got something good going for it.

Hey, thanks for reading to the end of another Sunriser!

This means you’re one step closer to the weekend and can definitely tell your boss you did something productive today. If you’re thinking of becoming a member, don’t forget about the discounts available through today at coloradosun.com/join.

And, if you’re already a member and are looking for a way to show your pride, we’ve got some pretty sweet Colorado Sun hats now available in our store.