Good morning and happy Friday! If you’re still picturing lazy selfie-obsessed students when you hear “millennial,” let me update your mental image: The oldest of us are pushing 40, the youngest are out of college and in the workforce and a whole lot of us want to live in Denver.

A life insurance company cobbled together stats from Gallup, Zillow and the American Community Survey to report that the Denver metro area is the 3rd most-popular destination for people in my age group — even though the area’s homes are $100,000 more expensive than in “average” cities like Dallas and the cost of living is 6% above the national average (without a corresponding bump in average income).

The shine is not coming off Denver’s apple any time soon, and we should expect a steady influx of new young residents who won’t be connected to the history of the city or of Colorado. That lack of context was the recipe for the now-infamous gentrification-celebrating “Fresh Prince” parody video made by a bunch of real estate agents, who lost their contract with Kentwood Real Estate in the aftermath.

But digging in your heels and spitting when you hear the word “transplant” a) isn’t going to stop people from coming, and b) is a terrible way to build a sustainable community. After all, the majority of people who live here weren’t born here.

So my challenge to you, whether your family goes back generations here or you’re fresh out of the UHaul, is to do what you can to create a real sense of community. If you’re a longtime resident, meet your new neighbors (even if they live in an ugly slot home). If you’re a recent transplant, talk to some locals about what makes your new neighborhood special and do what you can to help preserve it.

Another great way to get on the same page as your neighbors is to share The Colorado Sun (say, getting them signed up for this newsletter) and your other favorite local journalism sources so that everyone can be working from the same information to appreciate and protect what makes this state so great.

Remember the Fort Collins trail runner who killed an attacking mountain lion? Here’s what his life has been like since. 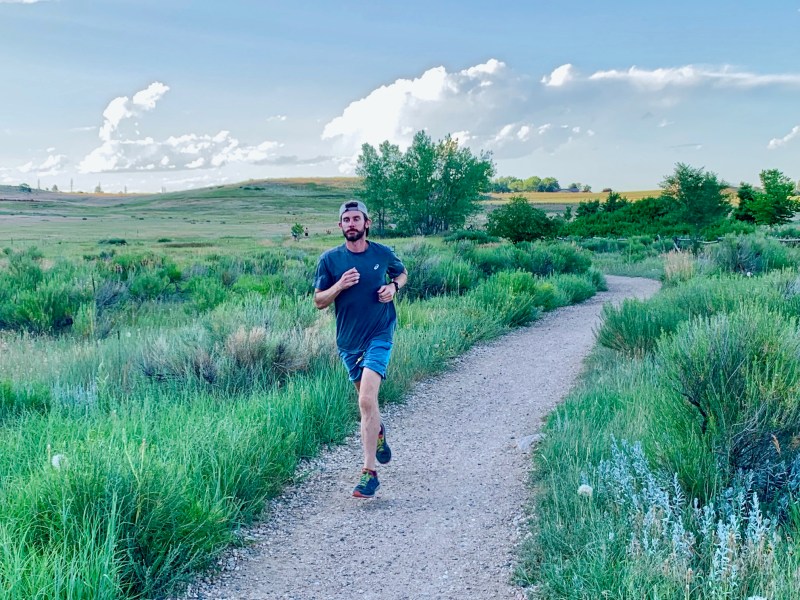 Travis Kauffman runs at the Maxwell Natural Area trailhead west of Fort Collins, wearing the same shorts that were torn by a mountain lion that attacked him in February. (Brian Metzler, Special to The Colorado Sun)

Travis Kauffman still runs on the same trail where he fought and eventually killed a juvenile mountain lion that attacked him in February. But he says he’s largely forgotten about the incident.

RUNNING MORE THAN EVER: Brian Metzler has a fascinating piece on Kauffman’s life after the attack and the instant, fleeting time in the viral spotlight that came with it.

Ocky Koa gets in some early morning surfing at the River Run Park, a pair of river surfing waves on the South Platte near the Broken Tee Golf Course in Sheridan. (John Leyba, Special to The Colorado Sun)

There aren’t many places in the country that you can find permanent surfable river waves. But thanks to a pair of WaveShapers in Sheridan, the South Platte River is one of them.

HOW SURFABLE RIVER FLOW FITS INTO COLORADO’S WATER PLAN: Kevin Simpson explores the recreational side of river surfing, as well as how the decisions — based on 150 years of water rights — made 70 miles north of the waves in Greeley control the flow the river depends on for recreation.

Being a Colorado legislator is a part-time job, but missing a day of the busy legislative session for work, family or health reasons can lead to missing dozens of votes. Sandra Fish analyzed all of the voting and absence data for this year’s session and came to some interesting conclusions.

“Our industry is facing significant challenges and we are positioning ourselves not only meet those challenges, but to leverage those opportunities for our membership.” 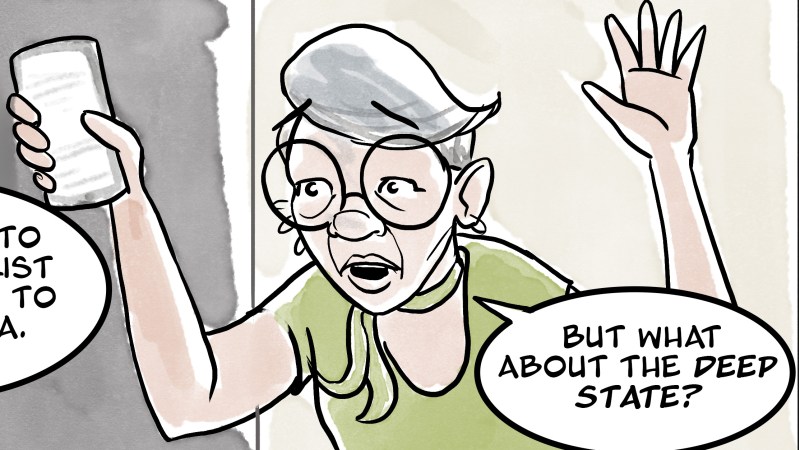 // Socialists, crisis actors, the Deep State. In “What’d I Miss?’ Myra gets an introduction to all the things you believe at your peril on the internet.

// Meanwhile, Drew Litton take on the urban goose controversy from an unconventional angle: What do you tell the kids?

One of the cool things about Margaret Mizushima’s series of K-9 mysteries is knowing how she has made the interaction of her protagonist, Mattie Cobb, and Mattie’s K-9 search dog, Robo, so true to life. In this excerpt from “Burning Ridge,” the latest in the series featuring these characters, she leads us literally step-by-step through the final stages of a search that reveals some grisly findings. The small details of communication between handler and dog make for fascinating reading — and that’s before you even get to the mystery. And in her interview, Mizushima reveals an author’s protective attitude toward Robo.

River North Brewery is now back home in its namesake neighborhood. The brewery will have a grand opening party July 27, but the new location at 3400 Blake St. is open now. To celebrate, I opened a Barrel Aged Avarice from my cellar because a whiskey-barrel-aged beer is not just for winter. River North makes a number of bigger-than-life stouts that you can lay down to mellow, so stay tuned for those releases. In the meantime, welcome them home by tasting their true-to-style River North White, an award-winning wheat beer.

// The last week has seen a lot of well-done stories about Colorado’s immigrant community:

// The Ute Mountain Ute tribe has invested more than a million dollars into a solar project in southwest Colorado — matched by the U.S. Department of Energy — and they are closing in on being 100% powered by renewable energy. Don’t miss this a detailed piece explaining the decade-long effort by the tribe. // High Country News

// If you live in Truth or Consequences, New Mexico, 597.3 miles from home plate at Coors Field, you might not be able to stream a Rockies game because of antiquated blackout rules that — ostensibly — exist to encourage fans to buy tickets to the live games. // NBC News

// The Aurora Chamber of Commerce is being bombarded with angry phone calls demanding that a member of its board of directors be forced out. That member? Johnny Choate, the warden of the immigration detention center operated for profit by GEO Group Inc. //  Sentinel Colorado

// In the middle of an investigation by The Denver Post into a $2.5 million contract , the second-highest ranking administrative official of Colorado’s Judicial Department resigned. // The Denver Post 🔑

// Two people were spotted on snowmobiles on a trail near Independence Pass — which doesn’t allow the vehicles even if there was snow (and no, there was no snow involved). Maybe they were testing out their sleds to be useful during the “longer, more frequent and more dangerous” heat waves that the world can expect as the climate changes. // 9News, New York Times 🔑

// Samsung, in what I can only assume is an attempt to create a new market for its last-generation phones, is paying for deputies at the Kit Carson Sheriff’s Office in Burlington to be outfitted with Galaxy S9 smartphones on their vests to act as body cameras. How an expensive, giant phone with a glass screen and less-than-stellar battery life will be an improvement on the traditional durable body cams is TBD, but the press release has some ideas. // Engadget, BusinessWire

Why You Might Like It: I grew up about four blocks from the Yuma County Fairgrounds, so I’m confident in my ability to judge a county fair. Denver doesn’t exactly have farmland or ranches (outside of backyard chickens and goats) and its fair may not have a rodeo or a parade or the particularly delicious flat-top griddled hamburgers that make Yuma’s fair great, but they’re doing the best with what they have (goat yoga, lowriders, a whole lot of beer, fashion, local artists, lucha libre wrestling and a heavy metal mariachi band, among other attractions). And I’ll bet you can get a funnel cake, because I’m pretty sure there’s a federal law requiring a funnel cake stand at any accredited county fair.

What’s your thing? Stop just raving to your Facebook feed about that thing you’re so passionate about. Send us an email at things@coloradosun.com and you could be published in a future Sunriser!

Whew! You made it to the bottom of this Sunriser and are both more informed and a tiny bit closer to the weekend. It’s going to be a hot one, no matter where you’re spending it.

We ask you to share stories in these newsletters all the time, but one easy way to share all of them is to forward this very newsletter to friends, colleagues and neighbors you think would like to get plugged in to everything The Colorado Sun has to offer. The more the merrier!

Don’t forget the sunscreen and have a great weekend! We’ll see you back here on Monday.

A Colorado family tried to save their cattle ranch by betting big on rare birds. It’s paying off.

From getting the bird folks at Audubon to certify its beef, to selling carbon sequestration credits for the tall grass, the May Ranch near Lamar is modernizing stewardship.

Ideas from book experts for your next great read

Littwin: The Supreme Court is expected to overturn or gut Roe v. Wade. In either case, that’s just the beginning.

If the court adopts a more deferential position to states’ rights, it could set in motion a cavalcade of state laws further dividing the country