Sunriser: Strange times to be a librarian, Colorado vs. climate change in 6 charts, the Year of the Renter, space balloons, Steamboat tickets and more

Good morning, Colorado! I hope you’ve got a little time to clear your mental plate for today’s Sunriser. While I’d like to think every newsletter we put out has a lot to offer readers, this particular edition extends from your local library literally into space with stops under the dome at the state Capitol and the ozone layer along the way (I promise that will make sense by the time you finish it).

Let’s inflate this space balloon already and blast off, shall we?

Colorado’s ski season is far from over, with the state’s snow pack at “epic” levels. And we’ve got an offer to help you enjoy it while it lasts. All new Colorado Sun members before Friday at 5 p.m. are entered into a drawing for a pair of Steamboat Resort tickets for this season! Memberships start at just $5 a month (with some cool perks for higher levels). Join our community here.

Note: New membership is not required to enter the drawing. You can also enter by emailing contests@coloradosun.com (but we’d really, really love it if you would pass on this drawing to your friends/family/etc. even if you’re already a member).

Climate change is a priority at the Capitol. These charts show how far Colorado needs to go. 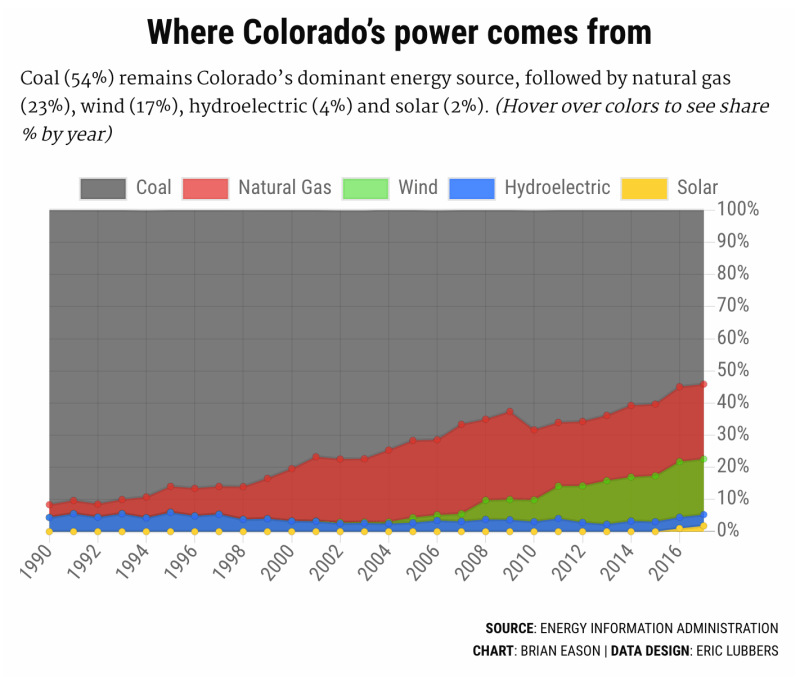 Colorado’s Democrats have made it clear that one of the party’s top priorities is to make a state-level difference in reducing greenhouse gas emissions, with bills like House Bill 1261 that would keep Colorado on track with the Paris climate accords — and even exceed those levels in some cases. But actually getting a handle on climate change — a concept so massive and interconnected that a philosopher coined a new term (“hyperobject”) to describe its scale — can be difficult.

So to help you get a mental grip on exactly where Colorado stands in its fight against climate change, Sun contributor Brian Eason created (or sourced) six charts illustrating everything from the state’s continued reliance on coal (above) to which sectors of life and commerce contribute the most greenhouse gas.

>> See all six charts — including how the bills at the statehouse right now fit in — here.

(Note:  I personally coded up Brian’s charts to work on your phone, tablet and computer, so please let me know if you have any trouble reading or understanding them.)

This piece by Sun contributor Karen Augé is a roller coaster. Conspiratorially minded activist groups are alleging a database used by libraries is deliberately pushing pornographic material on kids (the database flatly denies this accusation), while librarians and agencies like the Colorado Library Consortium find themselves in the middle of surprisingly contentious city council meetings defending free speech.

>> I can’t possibly sum up the twists and turns of this story here, so do it yourself and click through to read the whole story here.

It’s the Year of the Renter at the Colorado statehouse, from rent control to less stringent eviction timelines

That’s the number of evictions filed just in Arapahoe County in 2018, each one representing a household forced to leave their home for one legal reason or another. That “shocking” number of evictions is one of the motivating factors behind a slew of bills at the statehouse that, if passed, could drastically change Colorado’s rental landscape. The bills range from allowing cities to decide on rent-control policies to legally allowing tenants to withhold rent if the property has unsafe living conditions.

>> Read Jen Brown’s excellent explainer of the bills — including charts breaking down each county’s eviction rates and warnings from landlords — here.

“It was an interesting commentary that we got some of the smartest people in the state in a room to figure out insurance for 100 people, and we couldn’t make the numbers pencil.”

// They’re building some cool stuff up in Louisville. Sun contributor Laura Keeney has the story of a three-floor, four “bedroom” inflatable apartment built at Sierra Nevada (the spacecraft makers, not the brewery) up in Louisville that could become the living quarters for America’s return to the moon. And not only would there be a surprising amount of room for astronauts, they could be growing their own food inside, which immediately makes it preferable to most available apartments in Denver. Check out the whole story (with lots of cool photos) here. // The Colorado Sun

// In Monday’s Sunriser, I dropped a few words that totally changed the meaning of a tease about Elizabeth Warren’s embrace of a “Right to Repair” for farm workers. To clarify, Warren wants farmers to be able to repair their own equipment, and the “right to repair” movement goes way beyond tractors. WasteDive has a great rundown of the push to reduce e-waste from phones, computers and more by allowing people to keep gadgets longer. // Motherboard, WasteDive

// If you’re wondering who would ever be against the idea of people repairing their own devices, just take a look at what happened when Apple was shamed into giving cheap battery replacements for older phones last year (spoiler: millions of people opted to fix their old phones vs. buying expensive new ones). // AppleInsider

// The thing about Denver being a railroad town at heart is that you can still see things like Boeing 737 fuselages being shipped through the middle of the city. // /r/Denver user u/jaydubbles

// Speaking of Santa Fe Drive, I’ll admit I’m a little bummed that someone didn’t get creative and try to turn the iconic Rio Grande Co. silos (you’ve seen them if you’ve ever ridden the central light rail lines) into the coolest condos in the city. Instead, they’re set to be demolished. // BusinessDen

// David Sachs at Denverite called it “one of the worst-kept secrets in Denver” as the city formally announced its own Department of Transportation and Infrastructure. // Denverite

// We’re in year three of working to eliminate the stockpile of chemical weapons still stored in the U.S. Army Pueblo Chemical Depot and only about a quarter of the shells containing deadly mustard gas have been destroyed. Blame rust. // CPR, The Associated Press

// A federal grant could help make southwest Colorado’s Wolf Creek Pass safer, with cameras and increased communication for drivers. If you’ve ever been over this route in a snowstorm, you’ll appreciate these updates. // The Durango Herald// Just before the 2016 election, 13-year-old Jaden Rams of Grand Junction was photographed at a rally in a Trump hat shouting in support. Now, he’s the centerpiece of this The New York Times look at how young people are tilting leftward. // The New York Times

The Thing: “Nancy” (read on GoComics)

Why You Might Like It: I’ve always liked comic strips. The expansive comics pages of the Rocky (and later The Post) were staples in my childhood. But I didn’t get exposed to the original Nancy comics until I was an adult. I immediately loved the humor and the surreal artistry of the stip, so much that I strongly considered getting this panel incorporated into a tattoo — but settled on painting a huge version of it to hang in my apartment. Fast forward to 2018 and Nancy, suddenly, has been reborn. Drawn and written by a mysterious cartoonist named Olivia Jaimes, the new strips keep all the same wit as the original, but are firmly in our hyperconnected time. Pro tip: Follow the official Nancy Twitter account to get the strips daily or get a GoComics membership for $2/month to get a whole personalized comics page in your email.

All right, that’s it for us today. Don’t forget to become a Colorado Sun member (or gently harass your friends and family to become one) and enter into our drawing for two Steamboat Resort tickets! But hurry, because you only have until Friday evening. DON’T FORGET: Every dollar you give goes directly toward the journalism we produce. Period.

Have a fantastic Wednesday and we’ll see you back here on Friday.